From the source:
"In a response to written questions, an Air Force spokesperson said the unmanned spaceship is scheduled for launch April 19 on an Atlas 5 rocket from Cape Canaveral, Fla."

"The spacecraft completed a series of captive carry and free flight tests in 2006 underneath the privately-owned White Knight aircraft from Scaled Composites. Taxi tests were conducted at Vandenberg in 2007. "

This is very interesting. The US military has already expressed interest the civilian suborbital space market with hopes to adapt a favorable design for on-demand transportation to any point on Earth within a few hours. Having government money would greatly benefit any private venture.

I think this project might benefit SpaceDev, which is currently developing a similar spacecraft for the civil sector, based on a canceled NASA project. http://www.spacedev.com/spacedev_advanced_systems.php SpaceDev's Dream Chaser is planned to be launched into orbit atop an Atlas V rocket. With cooperation between the USAF and SpaceDev, civil space travel with a reusable space vehicle might become a reality.

I find the relationship between the military program and SpaceDev's program to be intriguing. The USAF's vehicle appears to be a scaled-down version of tested re-entry vehicles, such as the Space Shuttle. Perhaps one of its primary objectives will be to test the aerodynamics of having a lifting body atop a rocket during launch, and to test re-entry characteristics for the desired mission parameters. 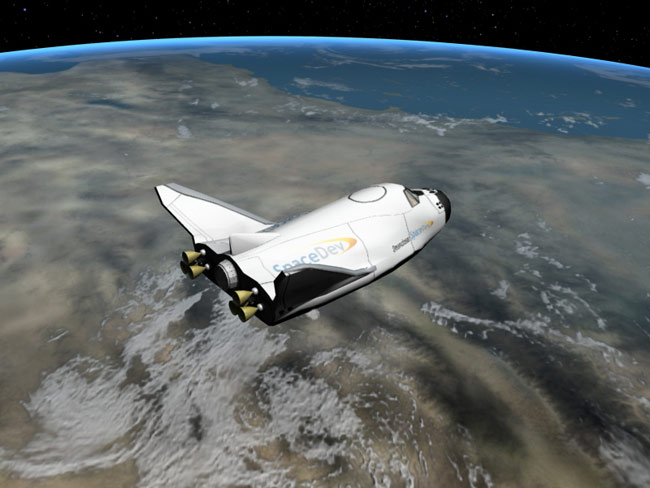 This is intriguing. Thoughts?
Top

Curious, is it remotely piloted or automated ?

BTW, just as a very out-of-this-world question: What does it take to apply to be a civilian astronaut with NASA ? Not according to the published regs, but in practice ? Has anyone from a.net applied at all ? In light of this "new" design spacecraft coming into service a short time from the end of the STS program, could we see a resurgence of interest in commercial space travel with small reusable aerospace planes (not for tourism!) ?
Up, up and Away!
Top

Dyna-Soar + 40 years!
“In the age of information, ignorance is a choice.”
-Donny Miller
Top

I would assume that the launch portion of flight will be automated, while the landing portion will probably be remotely operated, UAV style. I didn't research this though, so I might be wrong.


Not far-out at all. Right now, while these manufacturers are testing their equipment, only inside guys will fly these spacecraft. However, this will soon expand. Virgin Galactic has expressed intentions to hire Virgin pilots to fly their Space Ship 2, and I expect that others will follow this trend. I don't know Virgin Galactic's hiring mins, but I would assume that it would be a privilege not unlike Concorde was for BA. However, if this market becomes profitable, which I think it will, then you will begin to see many pilots with various backgrounds flying your spaceship.


Hopefully...Perhaps one of the most optimistic points of this article is the fact that the military is indeed embracing suborbital space travel. Since the military generally leads the technology sector, this is promising. I would think that a market for high speed intercontinental travel exists in the civil sector. Military utilization is inevitable. As always, costs will determine the feasibility, but there is a nice possibility that this technology will enter the mainstream market. Initially, I would expect high prices, but they should drop as technology improves.

Users browsing this forum: No registered users and 46 guests