Its just a touchy subject around here.

Google search for some of the threads and read over them, you will see why the mods have put a gag order on it.


The -2C is not a stand alone aircraft. It's a tanker minus the refueling gear and countermeasures system and an important part of the test program.
Never take financial advice from co-workers.
Top


LRIP contract will be awarded once Boeing reach milestone C in April. If Boeing miss that milestone, and the contract is held, then you can start throwing tomatoes.


Even if they don't get an LRIP award in April Boeing is still going to continue with production. At this point they can't afford not to. Not if they want to have any chance of delivering 18 tankers by Aug 2017.
Never take financial advice from co-workers.
Top


Either way, these contracts comes with funding risks. If not the supplier not meeting the milestones then it's the government not appropriating funds in time (sequester anyone?). They just have to deal with it.

the third one flew today


The A330 has a much larger wingspan than the 767 and causes them to take more ramp space. These tankers are being bought to replace KC-135's. The 767 can fit in the same space as the KC-135 and can use the same facilities like hangers built for the KC-135 with minimal or no modifications. Considering all the infrastructure already in place at air force bases around the world, it's cheaper to build a fleet of tankers based on the 767 than the A330 to replace the KC-135.


Not unexpected really. Not sure how Boeing is going to recover those costs or will they simply write them off as has been the state of play lately.
Top


If they end up building 180 or more of them, they could recover it over the run as the production costs drop with experience. The USAF will also be buying plenty of ancillaries over the life of the frames.
Top


I can't see the reductions coming from production, you would think that Boeing has squeezed all the efficiencies out of the 767 line already and any benefits are only going to come from a significant increase in production.


Perhaps. It would be interesting to know if Boeing is making money from KC-135 support contracts or just keeping their head above water, given they are now competitive bid?
Top


That and coming down on the learning curve for the military portion of the production. Remember that the cost of the integrating the military hardware can be as much as the green airplane itself. For the tanker, it may not be as much as something like the P-8, but it could be significant.

How much of the $1.5 B has already been written off? Just concentrating on getting the planes delivered as best as possible and ship more sub-components production to India to reduce cost


While Boeing might have squeezed out all the efficiency out of the 767 line they still have a long way to go with the KC-46. The issues are not with things like the wing, landing gear, fuselage etc. It's with the wiring, avionics and all the other systems that make it a tanker.

Eventually they will get cost reductions from improved efficiency on KC-46 production. That's almost a given. Like with any other program there's a learning curve. It just happens that the learning curve on the KC-46 is a bit steeper.
Never take financial advice from co-workers.
Top

The $1.5B was a government estimate of what the over run could be for what that's worth. Boeing said $766 million.

Boeing is building 767's at 2 a month. The wiring issues on the early frames wont affect the build rate nor will the contaminated fuel systems that slowed down the early frame. The Defense Contract Management Agency thinks 1 a month is high rate production.


17 airplanes in 18 months is not high rate for the 767 airframe... at least as long as Boeing has gotten the wiring issues all worked out. Since they are flying 3 frames with production wiring in the final configuration (barring any flight test failures for wiring which is unlikely at this point)... I don't see any issues preventing Boeing from hitting the Sept 2017 target.

1 a month rate might be high for the government.. but not for Boeing. 1/month is barely moving for commercial and the 767 is mostly a commercial frame.
Top


Just had a "round table" with a higher level manager on my program and he explained some of the intricacies of production rate with respect to a militarized/commercial line. Yes, 1 a month would not be difficult for Boeing, but at a price. You want to keep your work flow steady. You don't want to ramp up to meet the 17 planes goal just to reduce you rate again after the initial buy. You have to figure in the rate of both the tanker and commercial frames and when the other customer needs their frame. Boeing can meet the higher rate, but it would cost them money to move people around and get buy in from their sub tier supplier. So if you are already losing money, you want to do everything to reduce that cost.


Boeing already raised the rate to two an month and next year they will raise it to two and a half. Even then though they will not be able to deliver eighteen KC-46 tankers to the USAF by August of next year.
Never take financial advice from co-workers.
Top

Looks like the KC-46 is unable to refuel C-17s currently, due to higher than expected boom axial loads


While it isn't great news these types of issues are the whole point of the dev and test phase so better to find them here than when the aircraft is operational.
Top

My question is how were these loads unanticipated when the boom is just a revised KC-10 boom, which has proven more than capable of refueling C-17s in the past? From what I understand of the KC-46 boom, it's basically a KC-10 boom with some 21st century minor revisions. The basic structure and control system remain the same.
MSgt, USAF
KC-135R / C-17A Pneudraulic Systems Mechanic Supervisor
Top


That is the million dollar question. One would assume is should perform better than its predecessor.
Top


Imagine how bad things would be if Boeing didn't have all that tanker experience!


At least they have enough experience to keep the boom on the plane...

According the following article Boeing's KC-46 aerial refueling tanker continues to be hampered by late supplier deliveries, according to a federal oversight report released Thursday.
“A key supplier is not delivering aerial refueling systems on time, which could affect the timely delivery of aircraft,” the Government Accountability Office report says.

According Boeing the following suppliers are involved with the refulelling system :

See : http://boeing.mediaroom.com/2011-06-...oeing-Names-KC-46-Tanker-Suppliers
Operating a twin over the ocean, you're always one engine failure from a total emergency.
Top

Not much more info than already given though.
Just when I think you've said the stupidest thing ever, you keep talkin'!
Top


We know Boeing can have the 18 767-2C frames themselves completed within the contract date based on the production rate and FX's delivery schedule for 767-300Fs, so it makes sense that the hold-up is in outfitting them to the KC-46A specification and now it appears that said hold-up is being driven by the suppliers.

Be interesting to know if said suppliers would also have supplied the KC-45A with the same components, in which case the KC-45A might have been just as at risk of missing the delivery deadline even if Airbus Military had the base airframes completed by then, as well.
Top


while it's fun to speculate, you're opening that wound again and we'll be in for more endless comparison drivel.
Top


Whether or not the aircraft might have been more "on-time" still doesn't change the capability of the respective aircraft. The KC-45 is too large and expensive. It doesn't fit the mission requirement as well as the KC-46. It's unfortunate the KC-46 will be a bit late, but it is still the better choice for the USAF. I'd rather have the right aircraft a bit late, than the wrong aircraft on-time.
WhaleJets Rule!
Top


I agree on both points.

Let's try to remember this is the "KC-46 Production, Testing And Delivery" thread...


Which is interesting since the previous difficulties (wiring problem, fuel tank cleaning problem) should have given the suppliers some more slack to work with.

It ain't a KC-46 till all the parts are in it, and it's Boeing's name on the tin, so it's all Boeing's problem to sort out.
Wake up to find out that you are the eyes of the world
The heart has its beaches, its homeland and thoughts of its own
Wake now, discover that you are the song that the morning brings
The heart has its seasons, its evenings and songs of its own
Top


The axial load problem could be something as simple as a problem with the boom trim system, or even the load sensors. In either case it is just a matter of making the proper adjustments, adjusting the software, and no hardware changes. I really doubt this is a major set back. It is important to note there was no problem in the actual transfer of fuel to the C-17 at the maximum offload rate.

So the commercial version of this aircraft is known as the 767-2LK/C right?
Top


The second test B767-2C is now at the flight line and did some HF communication tests and will be active soon. 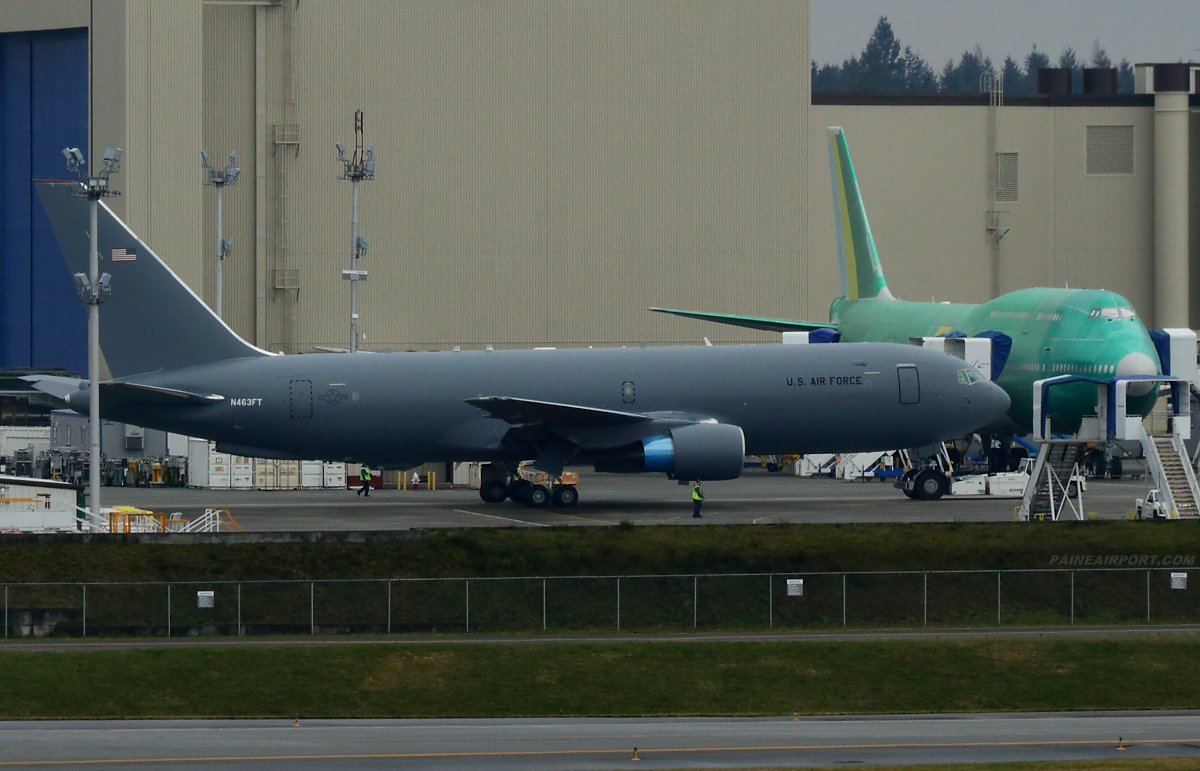 
The subtype is 767-2C , with Boeing customer code LK for the USAF- KC46A
Operating a twin over the ocean, you're always one engine failure from a total emergency.
Top


No it is not.
Never take financial advice from co-workers.
Top


I believe it is available to order but not certified yet for delivery..
Top


It is not available for order. All a -2C is is a KC-46 minus the mission systems. All the associated wiring, structure, hydraulic runs etc are there.
Never take financial advice from co-workers.
Top


Nothing to worry about there is another off the shelf boom that has been cleared against the F-15/16/22 C17 and Wedgetal. There is a viable alternative.
“Don't be a show-off. Never be too proud to turn back. There are old pilots and bold pilots, but no old, bold pilots.” E. Hamilton Lee, 1949
Top


That does not preclude it from being available for civilian sale. Boeing has listed it on the official price sheet (though with the notice that one should contact their Boeing sales representative) and in 2012 the US Air Force's KC-46 programme manager - Major General Peter Bogdan - talked up commercial sales of the plane for possible customers including FedEx and UPS.
Top

I recall reading that when certified Fed EX will switch future freighter procurement to the 2C leaving Boeing with only one 767 fuselage type on the line.
Top


FEDEX 767-300F aircraft are mostly volume limited and not weight limited, why would FEDEX choose for an other subtype with less cargo volume.
Operating a twin over the ocean, you're always one engine failure from a total emergency.
Top


Because they may be cheaper if they are in full rate production for the USAF?


Would either UPS or Fed Ex want an airplane with the number of differences that the 767-2C/KC-46 has with their current fleet of 767F? Do they want to lug around all the added structural weight that the 2C has which cuts into the amount of cargo they can fly.