The aircraft apparently needs permanent ballast to correct a CG issue owing to design errors. Translated from a Russian article: 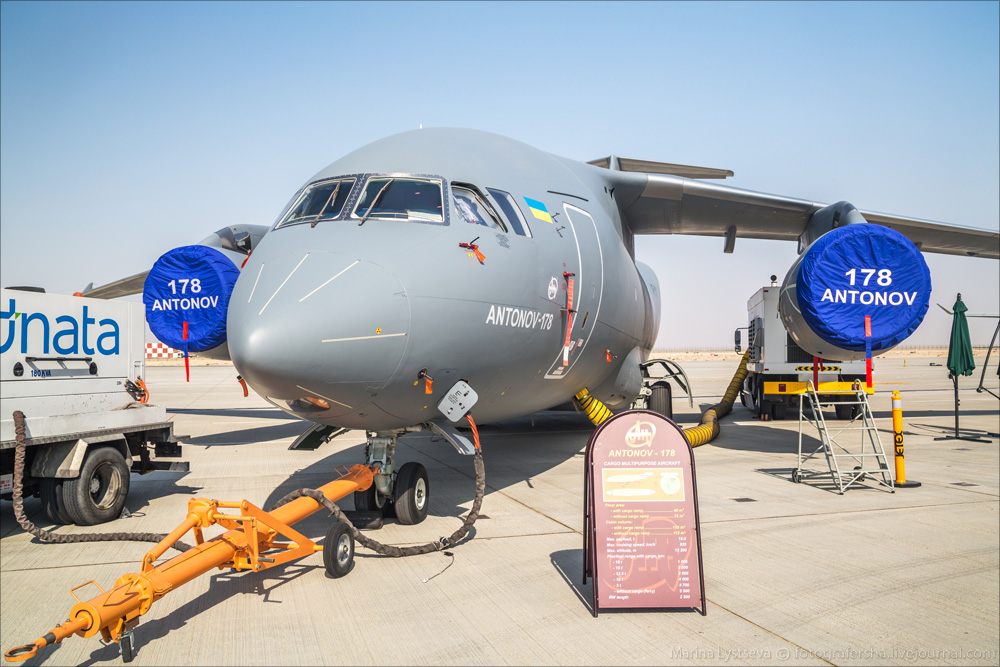 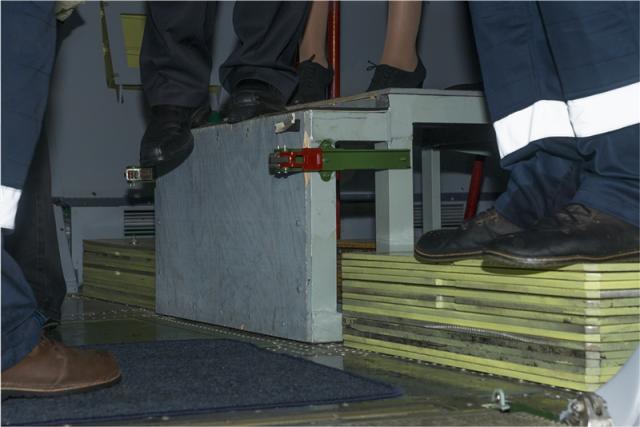 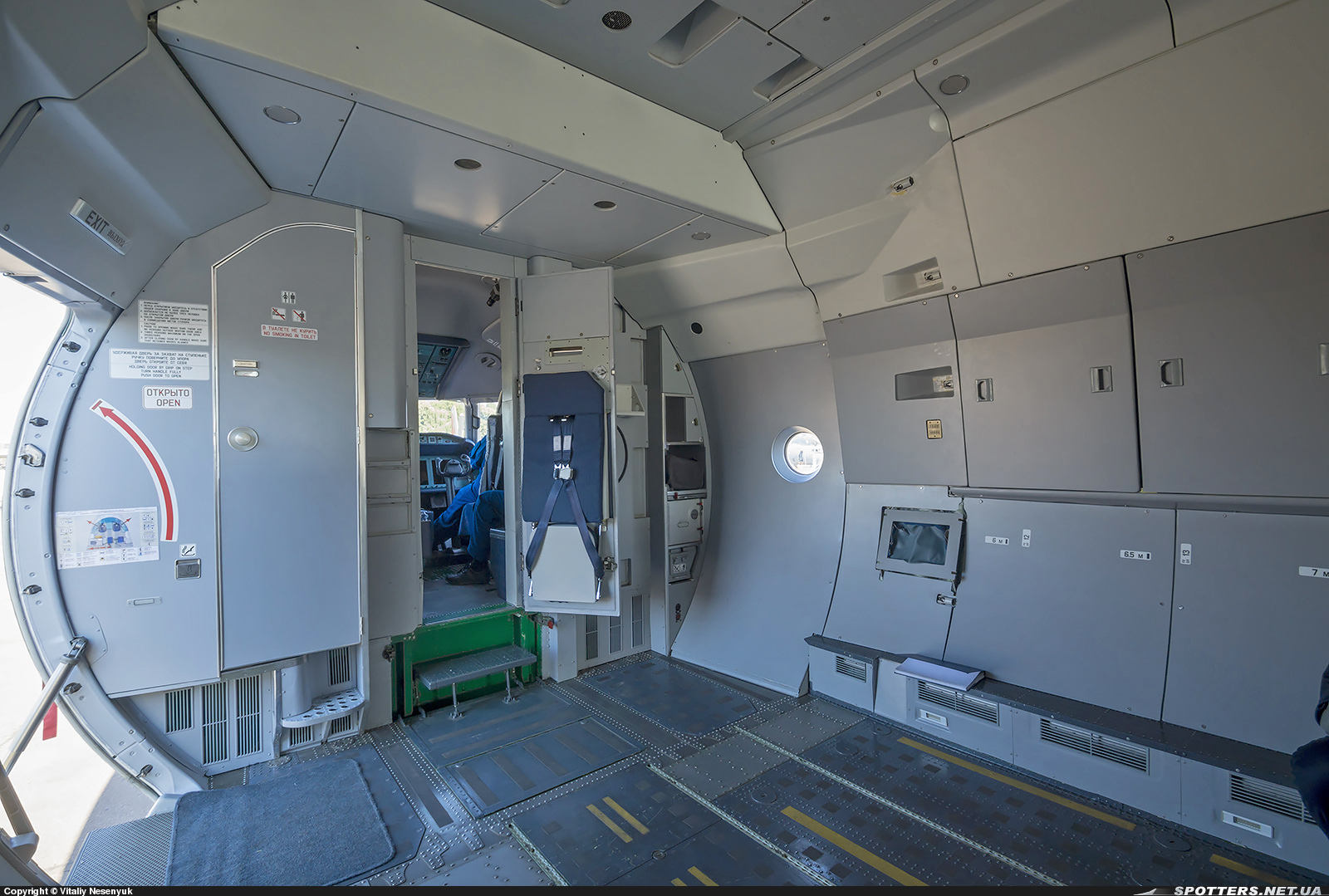 '' According to insiders in a number of web resources, during the first flight tests of the first built by the State Enterprise "Antonov" prototype of a new transport aircraft An-178 (serial number 001, registration UR-EXP) revealed a serious problem with the centering of the machine due to significant errors in the design . As a result, to ensure proper alignment of the plane is forced to perform all of any long-term test and ferry flights with additional ballast weight weighing 1.32 tons (!) As a package of 15 steel plates weighing 85-90 kg each, laid just behind the cockpit''

''It is with this ballast An-178 prototype depart at the air show in Le Bourget, and now in Dubai, and after landing, the ballast is discharged quickly to conceal the fact of his presence on the plane. Needless to say, the constant presence of ballast 1.32 m deteriorates characteristics of the airplane, and without that, apparently, is hardly relevant advertising data, claimed the State Enterprise "Antonov". Presumably the reason for improper alignment of the machine was taken at the design stage in 2012 the decision to increase the wingspan of aN-178 by 2 meters, as well as the wing area from 88.5 to 98.6 square meters, while maintaining the same has already designed the fuselage (this decision, in turn, was caused by the failure tenden- cy estimated takeoff and landing characteristics with respect to the claimed). Thus, apparently, the defect is "organic" and removable hard constructively. It is suggested that the alignment defect correction means may be an increase in fuselage length in the area of center, and the bow, which, however, will require extensive redesign, construction of a new prototype flight model, and in fact in this case, a new test program redesigned aircraf'' http://bmpd.livejournal.com/1574757.html
Top

things are not going good for Antonov http://www.fool.com/investing/genera...m_medium=feed&utm_campaign=article

am not sure how the shut downs in this article affect the AN-178 though.
Top

If the payload is 1.3ton or bigger would the ballast then be needed? Or would payload placement be able to account for the cockup?
Top

Reminds me of the C-5 before they were wing modded. "Pet rocks" were loaded forward in the cargo compartment on pallets. Mostly for air refuel training missions if memory serves. I think that issue was fixed when they got new wings.
Top

I wonder what this means for the Saudi LoI?
Top

Something doesn't add up here. From what I read in the broken English translation the imbalance should have originated from a 2 meter wing span increase. Extending the wing span on a plane with swept back wing makes it nose HEAVY, meaning that it should have ballast in the tail instead.

I can't believe the claims. The An-178 is a modified An-148/-158. Even a 4th grader school boy would design those mods without a one tonne plus center of gravity error.

Only this one single prototype exists at this moment. The pictures don't show what test instrumentation it has loaded in the aft cargo bay. The whole issue could be that at this very moment the aircraft happens to be equipped with a spin recovery drag chute in the tail. Simply because now is the time to do spin recovery tests.

The web site appears to me to be Russian, not Ukrainian. The Russians have every right to badmouth the An-178 since they try to sell their own almost identical (slightly larger) Ilyushin IL-214. Hell, even A and B regularly sling that type of mud across the Pond, luckily most often in an intellectually more refined way.

In any case, this whole issue has of course no relevance to the fully developed production An-178s, when / if they reach the market.

When / if? I think it's a big "if". With head-on competition from Alenia, CASA, Embraer and Ilyushin, and plenty of well worn C-130 around, I am not an An-178 optimist.

To sell multi million $$$, hi-tech, maintenance intensive hardware to last 20-30-40 years it isn't enough to have a slightly superior product. A commercially stable technical support organisation is definitely needed. Sadly Antonov don't qualify for that description today. Instead a lot of people won't get very surprised if they are heading the Fokker / Dornier way.

It' a Russian source about a Ukranian aircraft, it needs to be taken with a grain of salt.

As far as ballart, many aircraft have it. If member serves there is about 200lbs in the nose of a 727-200! Hardly a failure of an aircraft.


Aren't you thinking about the 722F planes re-engined with heavier JT8D-2xx for engines #1 and #3?

They needed some nose ballast for empty flights.

For everyday freight operations the weight and balance calculation was just a little different compared to an ordinary 722F.
Top

The article aready has the response from Antonov which does not confirm existing claims. Indeed it is a bit difficult to know the real truth about current status of the project from Russian or Ukrainian media.

However to talk about the future of the project it is important to look at it from the marketing point of view. For the moment comparison of An-178 with KC-390 is not in favour of Antonov. As from declared characteristics, as from the plane and engines service life, as from maintenance there Embraer is incomparably better than Antonov for the moment and it is not clear there Antonov can rise funds and specialists to develop it.

We have to keep in mind that when the project was launched it was called Ukrainian-Russian project and the major potential buyer had to be RusAF. From nowdays it sounds as something impossible. Another problem is the dependence of Antonov from Russian supplies (was up to 50% by 2014). They had stated that they are going to locolise it or replace by other suppliers but it is not so easy to do shortly.

So sadly for the moment certain scepticism is obvious regarding the future of An-178.


As I understand it, the 1500 pounds of ballast were required all the time, not just empty.
Top

737-400F converted by AEI require 1000kg of ballast (or cargo) in the rear to be inside the CG envelope. Not all planes are withing the CG limits when completely empty, some also have 'minimum flight weight' limits.
Top
Post Reply