looks like the aircraft is still intact on the ground. 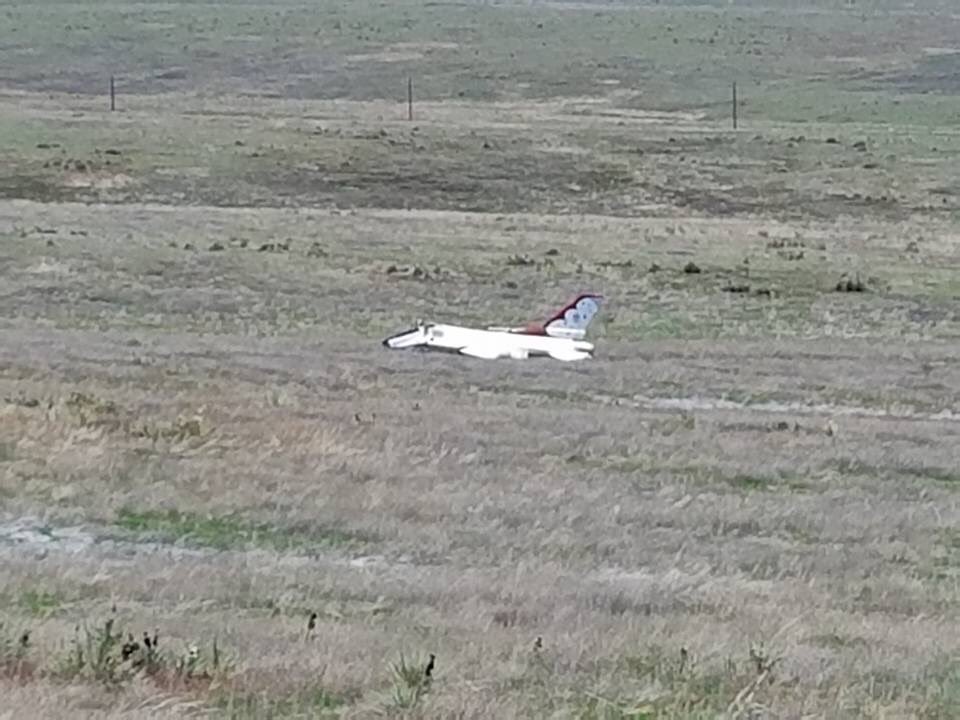 "Keep true to the dreams of thy youth." - Schiller
Top

Reports of a Blue Angel crash in Tennessee too.

What are the odds?
Top

Quite odd to see a fighter jet laying on the ground.
What we leave behind is not as important as how we've lived.
Top

Reminds me of an F106 (or F-102) bailout years back. I think it was in trim and landed in a snowy field out west somewhere. I believe the jet was fixed, and put back in service. Single engine aircraft are fun until your only engine calls it quits, if that was what happened to the T bird jet.
Top


Especially without a pilot in control. Guessing engine failure, but he had enough control to put her in a "gentle" glide and then punched out with the plane continuing on the glide to impact. The ground looks flat so the plane probably "soft-landed" and then slid to a stop.
Top

Some post-crash video "hot off the press", up here in Denver:


From the linked video it slid quite a distance.
I can not tell if the charring on the fuselage is from the ejection seat or was the result of what caused the crash.
I would guess there was no engine turning since there was no post crash fire.
Okie


Local news here in COS reports an eyewitness (yeah, I know) saying the engine made popping sounds before the plane pancaked. Sounds like a compressor stall.
The last of the famous international playboys
Top


Ahh the cornfield bomber. Yep. It was an F-106 The pilot ended up flying it again after repairs too... Not only is he in the rare position of having one more takeoff than landing, he's the only person to eject from an aircraft and then fly the same plane again. 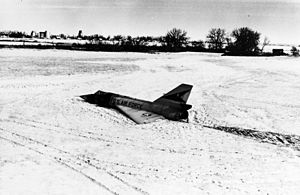 CNN is reporting the pilot ejected safely following directing the jet away from a population center.

Further reports indicate that the President stopped by to check in on him following the USAFA graduation ceremony.
When it absolutely positively has to be there ... at some point.
Top


First reponders in full protective gear. Can never be to careful when hydrozine is involved.
Never take financial advice from co-workers.
Top

The fuselage is broken just behind the cockpit.

How repairable will this be?.
Top

The pictures of the pilot meeting with POTUS after his bailout are pretty cool.
Opinions are my own and do not reflect an endorsement or position of my employer.
Top


I'm assuming you mean Hydrazine? Why would there be Hydrazine at an F-16 crash site?
Opinions are my own and do not reflect an endorsement or position of my employer.
Top


Wow, learn something new every day! I never would have guessed they'd use something as toxic as hydrazine in something as widely deployed as an F-16. Thanks for sharing!
Opinions are my own and do not reflect an endorsement or position of my employer.
Top

Hmmm..... Since this is anet, and people speculate... What scenarios would cause this? The first one that comes to my mind is a lack of go-juice. I would hope the service would have a fairly strict requirement for landing with at least some reserves. I hope the desire to put on the show didn't lead to an error in judgement. That being said, indicator errors can cause the same effect. See >> http://en.m.wikipedia.org/wiki/Tuninter_Flight_1153


Low level? Good chance of a birdstrike.
757 Most beautiful airliner in the sky!
Top


Not. This will be a spare parts source if lucky. Basically assume everything in the fuselage is bent a good half inch or so, engine is toast, wings damaged, avionics damaged or destroyed, landing gear sheared off... They may be able to reuse the vertical fin though.
The last of the famous international playboys
Top


F16s are good at landing on grass with the gear up:


Hydrazine powered EPU's are EXTREMELY reliable and can provide a lot of power very quickly. There's just a lot of safety precautions involved with hydrazine due to the known toxic effects of it.

Newer aircraft omit the hydrazine powered EPU; both the F-22 and F-35 use auxiliary power units that use jet fuel as a backup power source, and to provide engine start capabilities as well as providing cooling air and cooling fluid.
Top

From a friend of mine who flies for the Collins Foundation there is this that he shared on FB:

Rumors abound at BKF. TBirds took off to the south at C.Springs for the show. The Academy is not even 10 miles away so Bingo fuel was low.

The O-bla-bla talked longer than scheduled – some say 45 minutes. Some BKF guys were listening on the radio and heard No. 6 call Joker fuel.

Leader said to quit using burner and continue with the show for another 10-15 minutes. I am sure they were unaware of runway change to landing north and planned a quick turn to base for landing south.

Six went down 20 minutes after the Joker call. After the ejection, the plane landed flat 4 miles south of the runway and there was no fire. Hmmmmm ...

There has never been an excuse for running out of gas - even for Golden Arm TBirds. Looks like maybe 2 new drone pilots after the accident board gets done with them.

Info from the Leekster sez ...

He ran out of gas. They were holding waiting for POTUS.
The whole team was bingo. Boss and pilot fired. Done for the season.

Interesting and quite possible, investigation will reveal probable cause for occurrence of the accident and full disclosure of facts?

Lead would have been fired if he cut the show and might have gotten away with the the alternative...screwed either way... But the safety of his team should have come before satisfying the crowd. If you've ever flown in an Airshow you understand the thought process.. " look good or die" is always said in jest, but unfortunately there is truth behind it.

You're right WF... screwed either way. Only one question and it goes back to the sage old advice we've all been given... "...runway left behind you and fuel left on the ground...". Why did they take off with less than dull tanks? Not second guessing the Boss... simply wondering out loud.


Burner and boards will piss away extra gas.

HaveBlue wrote:
The O-bla-bla talked longer than scheduled – some say 45 minutes. Some BKF guys were listening on the radio and heard No. 6 call Joker fuel.

Sure would've been nice to have the president at my commencement.
Top

hivue wrote:
Quoting zachary165 (Thread starter):looks like the aircraft is still intact on the ground.
F16s are good at landing on grass with the gear up:

NamGunner wrote:
in and around Luke AFB, the F-16 is known as the lawn dart.

I haven't heard it called that in years - 30 years ago, it was a common name for the F-16 all around the Air Force.
KC-135 - Passing gas and taking names!
Top
Post Reply

Users browsing this forum: No registered users and 47 guests