The DND project blueprint website is currently active, with the current status:

The project will develop and implement a relevant, cost-effective, flexible, and efficient aircrew training program to meet future aerospace requirements of the CAF.
Requirements

The project must ensure a seamless transition with existing aircrew training delivered by programs like NATO Flying Training Canada , Contracted Flying Training and Support, and the training provided by 402 Squadron. The project must deliver agile and flexible courses to meet the future needs of the CAF. Aircrew standards and control of training content will be maintained by the RCAF. The training must meet the unique challenges of the Canadian environment, exploit technical advances to maintain relevant and cost effective training, and maximize simulation and emulation to create efficiencies and provide the best value for Canada. FAcT is envisioned as an acquired service contract, though the procurement strategy has yet to be finalized.
Funding Range

The Department of National Defence must maintain a multi-purpose, combat capable air force to meet the objectives of Strong, Secure, Engaged.

The future program will include delivery of pilot training, as well as aircrew training for air combat systems officers and airborne electronic sensor operators currently being performed in-house by the Royal Canadian Air Force.

The Industrial and Technological Benefits Policy will be applied to this procurement, requiring the winning supplier to make investments in Canada equal to the value of the contract. The objective of the policy is to maximize opportunities for Canadian companies, support innovation through research and development, and grow export opportunities from Canada. Additionally, this procurement will leverage the strength of the Canadian industry in areas related to training, simulation and in-service support.
Engagement

This procurement requires extensive engagement with industry. Preliminary consultations began in 2013. In 2016 industry was advised of the new scope of this procurement through a Letter of Interest. Through ongoing engagement, Canada will define its requirements and industry representatives will have an opportunity to provide feedback on items such as procurement approach, schedule, solicitation documents and economic benefits to Canada.

Innovation, Science and Economic Development Canada is involved in this process to ensure Canadian aerospace and defence industries are well-positioned to participate. In addition, the Canadian Association of Defence and Security Industries (CADSI) and Aerospace Industries Association of Canada (AIAC) will be engaged throughout the process.

The Government of Canada has been engaging with 84 companies that have signed on to participate in this process. Based on information gathered through the industry engagement process, Canada decided to pursue a competitive procurement strategy with a qualification phase.

On December 10, 2018, Canada established a list of qualified suppliers that demonstrated their ability to meet Canada’s needs, as defined in the Invitation to Qualify.

Here is the list of qualified suppliers (in alphabetical order):

Only these suppliers are invited to participate in the next phases of engagement and to submit proposals in the competition.

BAE Systems was on the list of qualified suppliers for the Future Aircrew Training (FAcT) program when it was established in December 2018. On April 2, 2019, BAE Systems informed Canada of its decision to officially withdraw from the solicitation process. BAE Systems is therefore no longer a qualified supplier in the competitive process and will not be invited to submit a proposal to Canada for the FAcT program.
Evaluation of proposals

Proposals will be rigorously assessed on elements of cost, technical requirements and economic benefits.

The evaluation may also include an assessment of bidders’ impact on Canada’s economic interests. The new assessment, as well as guidelines for its application as an ongoing procurement tool for major projects is being developed through separate consultations.

All Suppliers will be subject to the same evaluation criteria.
Next steps 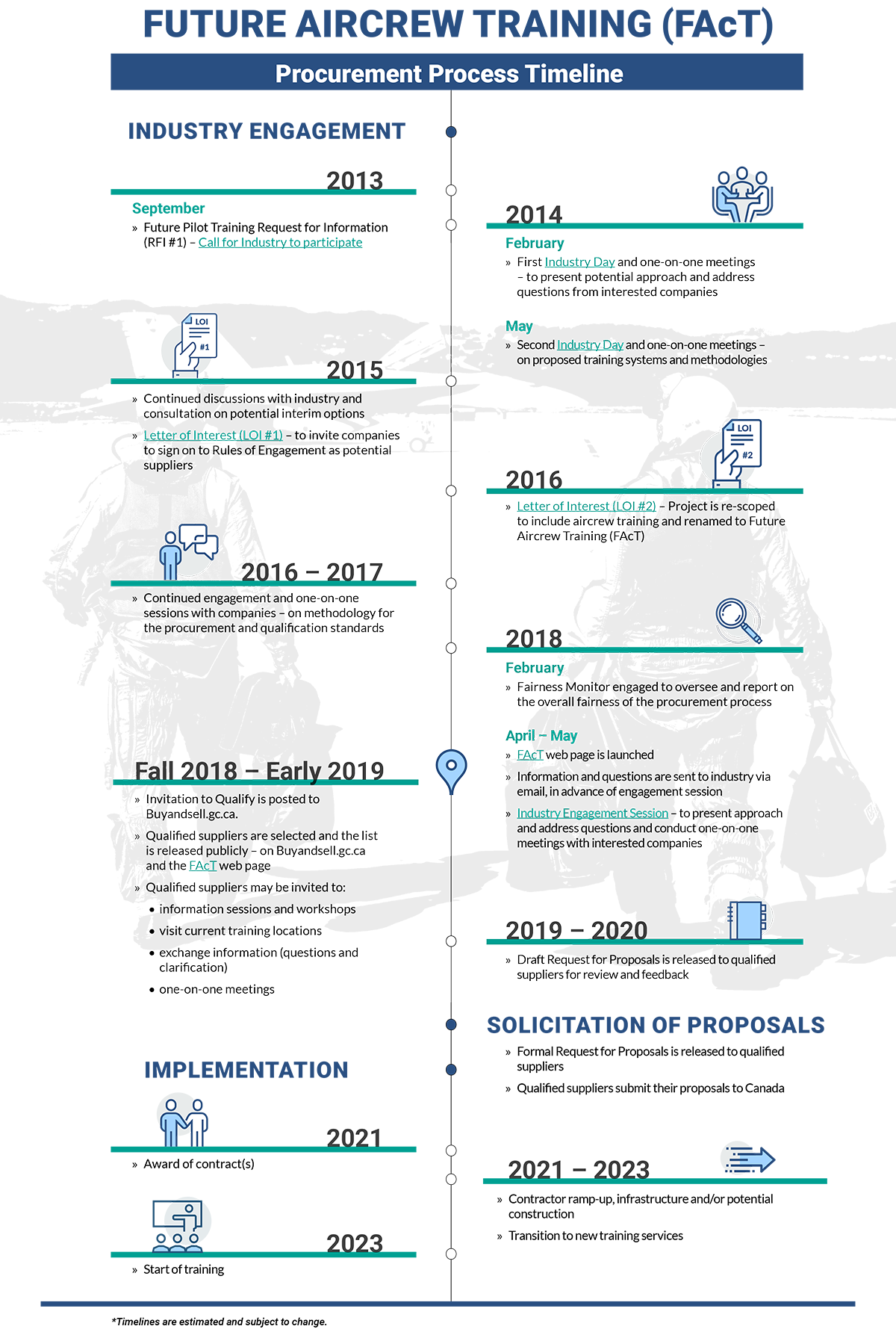 A recent article on the program in Skies Magazine:

Currently, the process for training RCAF pilots is for pilots to get basic air training via the CFTS, which is operated by KF Aerospace at Southport Airport with Grob G 120A trainers.

Then, depending on the stream, they go down the following paths:

Both programs are due to end this decade; the NFTC program will expire in 2023, but has the option of a contract extension to 2024. The CFTS program is due to expire in 2027.

At the same time, the RCAF wants to transition in-house training of its air combat systems officers (ACSO) and airborne electronic sensor operators (AESOp) to the same program as pilot training, a move partially driven by the end of service life of their primary training platform, the Dash-8 “Gonzo” in 2028.

Together, the RCAF wants to annually train 120 pilots, 40 ACSOs and 36 AESOps, plus or minus 15%, to a defined standard every year. The current system delivers about 100 to 115 pilots each year for the RCAF’s fleets of multi-engine, rotary wing and fighter aircraft.

Also, industry has been told not to expect access to the current fleet of contracted aircraft; as noted earlier, the Dash-8 "Gonzo" will reach end of life in 2028, while the current fleet of Grobs, King Air's, Bell 206's, Bell 412's, CT-156's and CT-155's are getting extremely beat up in terms of abuse and flight hours.

There is also some speculation that the RCAF Snowbirds will also have their replacement aircraft attached to the trainer replacement program; I'm aware that Leonardo has been pitching their M-345 jet trainer for that role, and they are listed as an interested bidder.
Top

The Royal Canadian Air Force has placed restrictions on its training aircraft after reports of problems with similar planes operated by other countries.

The restrictions follow a November 21 incident in which a training aircraft flown by the United States Navy and similar to the Royal Canadian Air Force CT-155 Hawk training aircraft had an engine-related incident. This was the third engine incident in such planes since May 2019 in other militaries.

Crews were not injured during the incidents.

But the incidents were significant enough for the RCAF to implement restrictions on the fleet of CT-155 Hawk used by the Canadian military at 15 Wing Moose Jaw and 4 Wing Cold Lake.

RCAF has decided to reduce all non-essential flying like flypasts and support to public displays and boost the training on engine related emergencies so that aircrew are better prepared to handle an emergency.

An article in Skies Magazine expands on what's going on:

Though details of the three incidents were not provided, a U.S. Navy student aviator and instructor pilot from Training Squadron 21 at Naval Air Station Kingsville, Texas, were forced to make an emergency landing in October when their T-45C Goshawk engine caught fire mid-flight.

In May 2019, the Royal Australian Air Force (RAAF) grounded its fleet of BAE Systems Hawk 127 lead-in fighter trainers for three weeks following an unspecified engine issue during a training flight. The RAAF did not place any operational restrictions on the fleet following removal of the grounding, but a spokesperson told Australian Aviation, “aircrew have been advised to be stringent in their application of existing operational controls to ensure any risk is reduced so far as reasonably practicable.”

The RCAF began the analysis of options in September for a future FLIT system that would replace the 18-year-old CT-155. The aim is an “integrated system of training aircraft, ground training systems, training airspace and air ranges” that would be introduced in 2024-2025. Initial operational capability is projected for 2027.