What was the designation of Boeing's CX-HLS Aircraft I know that later became the 747 but what was its official designation during CX-HLS? 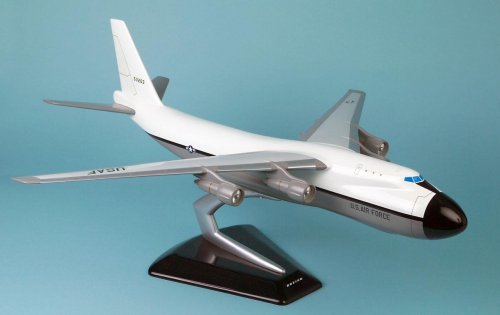 Didn’t have a number, just CX designation. Long ways from being a 747, don’t ya think?
Top

The tail section, wings, engines, and perhaps the upper deck/landing gear components are about all that wound up evolving into/being used in the 747 program. (Well, maybe the nose configuration). The main benefit from this for the 747 was just that the engines were developed to enable such a plane. To hear Sutter describe it, only the engines really were pulled over, but I think he was generalizing a bit there.

The design of the 747 has always been surrounded by a big rumor, in that when Boeing lost the Air Force CX-HLS competition, that ultimately led to the Lockheed C-5, they took their design and converted it to the 747.

“The Boeing CX-HLS proposal would have made a very lousy airliner,” Sutter said. “We started with a clean slate. Pretty much the only thing that survived from the Air Force competition were the high-bypass engines.”

According to Irving, “The development of the airframe was ahead of the engines; however, the engines were themselves a major leap in technology, just as the aircraft was.” When asked if they were given any words of wisdom prior to the first flight of the 747, Wygle said, “Nothing ever really came up. There was no discussion of a Tex Johnson-style roll. It was a very professional approach to the flight.”