Any Model Railroaders Here On A.net?

Any Model Railroaders Here On A.net?

I've always been an enthusiast of both aviation and railroads, as far back as I can remember (got my first wooden railroad when I was 3).

I'm in college right now and I neither have time, space or money for my long-time hobby of model railroading, but I still have a huge collection at my parents' place, and one day when I have a good job and a nice house, I'll build a huge layout in the basement. It has always been my dream, and I'm long past the age where most others give up on model railroading and sell the treasures of their childhood for laughable prices.

I do both H0 and Z scale, and I've specialized on the very small segment of American-prototype releases of the German manufacturer Marklin.

Any other model railroaders here on A.net? What scale, what prototype? Layout or just collecting?

By the way, in case you ever have a couple of hours to spare in Hamburg Germany, there is an absolutely amazing huge H0 layout called Miniatur Wunderland. It's a must-see!

My dad and I used to do model railroading when I was much younger. I got out of it for a long time, but have slowly been getting back into it. I don't have the space either in my current place and I don't have much to spend on it right now due to my upcoming wedding in July. But hopefully once the wife and I move into a bigger place, she will let me build a layout.
Top


That's my story, give it back!


Maybe I'll do the same. The thing is the track we have is all Märklin M (metal) which has gone out of production, and the stuff is pretty worn as well. It will be expensive to replace it.


As said above, I'm in the same boat as you. Years ago I used to put the large chipboard we had for the purpose on two trestles, build an oval with various junctions and extra tracks, a station or two and then use the model houses as decoration. It was all in H0. Of course, every single switch had to be electrified and all the sidings (if that's the word) could be cut off with the console next to the transformer. Additionally, all the lights available had to be put somewhere so I could switch them on and off; that is a given.

As for rolling stock, my pride and joy and also my first major purchase ever was the "Rheingold" train made by Märklin, model #4228. Other than that, there is a bunch of freight carriages from various makers, some passenger carriages and a few steam, diesel and electric locos. Should I ever build a layout, the worst day of it all will be the one when I've got nothing left to build.

edited because I found the picture

This is the one, right? 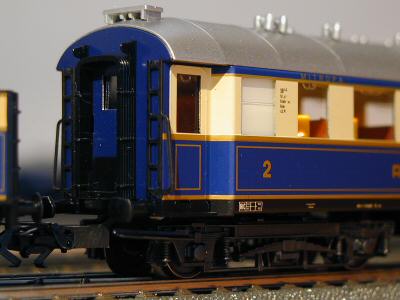 I'd be facing the same problem, I had mixed M and K tracks, but I would never use M tracks on a layout, they're incredibly loud! I think I'd switch over to the new C track, sure it'll cost me but my plans right now is that I'll be a millionaire in about 2 or 3 years, so it really doesn't matter.

Athearn Genesis and Atlas Trainman are the ONLY way to go.
Top

Hehe... I have to admit I was more into LEGO so that's what I got, the BRIO railroad remained quite small in size.


Exactly, a gorgeous train. I can't remember how long I saved my pocket money for that... it must have been plenty more than a year.


Indeed they are. When that Rheingold was making its turns, it was hard to understand anyone else in the same room. Nevermind they'd look like, well, crap on a refined layout.


Those won't look that much better, with K tracks you can build your own track bed which will a) look better once you get it right and b) give you more time until you run out of things to build.


Good plan there, let me know when you've made it.

Don't cry because it's over, smile because it happened.
Top

That sounds exactly like my story, which was about the Amtrak Streamliner train set. They announced it some time in 1996 or 1997 and I stopped spending money on anything, even saved my school lunch money, and started mowing the neighbors' lawns. When I finally had enough money it was Christmas, and surprise surprise, my parents got me the matching double-unit F7 engine!


I used to be when I was younger, my father started it in fact. I still have my cars, locomotives, usw... and have bought one set plus more tracks.


More than twenty years ago, I have visited the Göppingen Märklin Museum. I was just like that:

Where is my childhood ?

I'm not at college right now, but I neither have the time, money & space for that. Later...

Maybe, but that Märklin. It's for ever. Or almost!!


Ah, passion! French author Emile Zola once wrote: La passion est encore ce qui aide le mieux à vivre. In other words: Passion is what helps the best to live. It's increadible what we are ready to do for a passion!


That's a great surprise! I love these "bulldog nose" locomotives. They are the nicest that have been built in decades in the US.


Cheers, and don't forget to release the brakes.

I used to be, sort of still am.

My grandfather had a large collection of HO scale trains. When he died my Grandmother sold them, the tracks, the buildings and even the 5 ft by 9 ft table he customized for the set - tunnels, mountains etc.

I rescued a bunch of his nice trains before he sold them - ie Chessie Steam special,

You guys should come to San Diego to check out our Model Railroad Museum.

Pictures they have online don't do it justice, and I've always been a big fan of trains.

On the subject, I'm looking for my next job to be with Union Pacific or BNSF as Train Service crew. Hope I get the job.
Every problem has a simple solution; finding the simple solution is the difficult problem.
Top

Same here, you're not alone!

I used to have many models...I had my first real model set when I was about 5. Prior to that, I had a (now rare) Fisher-Price ride on train, as well as many other small sets.
Top

My son has rekindled my love of model trains.


Get ready to get a little jealous.


Jr. keeps getting wooden tracks, we can easily use a whole room to set them up


Our Lego train collection consists of:

I can layout a small room with these, have plenty of track and two controllers.


My half brother gave me his set of Marklin trains, the ones he started collecting during his adult years. This is a good setup with two controllers and plenty of stock.