Some of you may remember this thread from about a month ago(sadly NonAv does not keep threads alive for long!!)

A classic TEAC A-450 cassette deck, arguably one of the finest cassette decks ever made(certainly in the top 4-5)

As a young HiFi salesman in 1977 I used the proceeds of my 21st Birthday presents to buy a 2nd hand A-450.. the best I could find, even with the rose coloured glasses of hind sight this machine is in better condition than my last one was 35 years ago.

I cannot believe the condition of this thing.. the instruction manual envelope still has the packet of little “This is a DOLBY recording made on TEAC quality equipment” stickers

Once again...Now for the turntable!!!

Chris
If your camera sends text messages, that could explain why your photos are rubbish!....well that might have changed!!!
Top

WOW that stuff should be in a museum!

Thought this was going to be a thread on how great vinyl is. Don't get me started on that...
Top


It should be.. but right now that museum is my humble abode!!

When I posted yesterday I only knew the thing looked great, have since sourced some brand new(sadly not high end) cassettes, and it works great as well.


Part 3 might be when I get a turntable, though the TT may be a new one so won't fit in the "vintage" category.

Cheers
If your camera sends text messages, that could explain why your photos are rubbish!....well that might have changed!!!
Top

Ill jump in...let me take pics to post tomorrow, still analog and using tubes as much as I can...
The best seat in a Plane is the Jumpseat.
Top

I have a few interesting cassette decks...

to keep things interesting, although they are in storage, I do have an Akai GX-365D Note: This unit sounds absolutely exceptional. It is all the cassette deck anybody needed.

Also an Akai PM-01 walkman my dad got. This was like, expensive back in the day.

Those are some impressive machines you have there.
I like the Akai decks with glass head.
I've owned one similar to the one in your photo.
I currently use a Teac A2340 4-channel tape deck.

Now you need to pick up one of these.

The Akai CR-80D-SS has the best sound quality of any 8track deck because it has a glass head like their reel decks.


Definitely con! Yet to hear anything on vinyl that sounds better than CD. I know people like the cracks pops etc but its not for me. Plus i find it so tinny and lacking guts in comparison.

I guess in a few years time CD's will be a thing of the past (if they're not already) and people will be going on about how mp3's are far superior...
Top


A properly maintained LP will not have any cracks & pops.
Bring back the Concorde
Top

Haha that is great Superfly. Probably a rare unit, but who knows? The only real shame is when people _throw away_ these great Japanese/American hardware. The quality of finish on TEAC or Akai or Panasonic units prior to about 1982 was something we won't see again. To throw those things away is just sad.
Top


Not really. It's fairly common but sought after by quadraphonic 8track collectors. It was one of those few units were high-end audiophile meets mass-produced, cheap portable audio.
The 8track was never taken seriously by audiophiles (high-end audio collectors) because it was made rather cheaply and a vast majority of 8track players were of lower quality and didn't have high-fidelity playback heads.
There were a small handful of units that were of high quality by Akai, Technics/Panasonic, Superscope (Marantz) and Pioneer. The Akai unit pictured above is the crème de la crème of 8track technology.
I'd like to find a broken one and use the head for the Motorola 8track deck that came with my Town Car.
Then my 8tracks played in the car will sound even better.


So true. These new audio/video units today aren't made to last. I was floored when I found out that plasma screen TVs were only expected to last 6-7 years!

Those are so expensive too!
Bring back the Concorde
Top


Plasma and OLED displays degrade relatively quickly. That is inherent in the technology. CRTs also age quite noticeably.


LCDs, on the other hand, basically last forever. Their backlights also age over time, but in case of LED backlights they degrade much slower than the other display technologies do.

Excellent build and component quality also still exists – just not in the ever-cheaper products at the bottom end. In earlier decades you had to pay for higher quality as well; It's not that different today.
Top

Here's the closest thing I have to a "vintage" component.


That's interesting. I don't do analog myself, but mostly because I don't think it's worth the hassle to get a well performing system when competent digital performance is available with much less hassle.

The above preference aside, I've never heard a good vinyl system that sounded tinny or "lacking guts". Most of the time, I find vinyl to be warmer or more robust sounding than redbook CD.


If you're into quality audio (I am too and I know the prices involved), I can't imagine you care much about spending money on a passable flat panel TV. The last time I was in Best Buy they had a 60" 1080p Panasonic plasma set for $899. Based on average prices at the time, it's probably a fair assumption that anyone who doesn't own a flat panel paid $400-500 for their last CRT set. If you don't care much about quality, you can get a perfectly usable set for $400 (that might justify itself on the basis of reclaimed living space if nothing else).
Speedtape - The aspirin of aviation!
Top

Speakers: The tall Magnaplane and or Bose 901 speakers


I don't but products in that price range should be on par with Curtis Mathis and RCA in their heyday - indestructible.


Yes it is.
35 years ago, cheap brands such as Soundesign, JC Penny's, Sanyo, Toyo, Quadrapflex, BSR and Lloyds made robust gear that often still works today.
Bring back the Concorde
Top

As for "vintage," it all depends upon what you are after.

I have an old Sears Silvertone reel-to-reel stereo tape deck, from around 1960 or thereabouts. Looks a little rough (bugs ate some of the wood (!), but still works well.

Also, have a Stromberg-Carlson Stereo console unit from 1959, including the mid-range amplifier, a Garrard turntable / record changer (that may never work again because a couple of required rollers are corroded away, and crafted entirely of Unobtainium), and of course, the top-line Stromberg-Carlson stereo tuner, which means, it has AM and FM tuners which can both be tuned at the same time, with each tuner channeled to only one side, Left or Right. This predated the establishment of the stereo FM standards, although the tuner has a "multiplex" connector which, according to the manual, is for use when the standards for FM stereo transmission are settled. Guess father in law never bought the multiplex adapter, assuming it was ever manufactured.

In newer gear, I have a Concord CR-250 stereo receiver (1973), really mid-fi, but a decent receiver for its time and pretty rare as a brand; and a Luxman PD284 turntable (very nice unit), like new.

From college days, I own a Dynaco integrated amplifier with quad (there ya' go, 'Fly), which requires repair, probably a bad cap in the power supply section, but I have lost such troubleshooting mojo as I ever had, and a Dynaco FM5 FM stereo tuner (actually, I loaned it to a guy about 25 years ago, but I am confident that he still has it, is probably still using it, and would surely return it if I asked).

Oh yeah, and I have a workmanlike Radio Shack (Realistic) 8-Track Recording deck, of which I am confident 'Fly-man would surely approve.
...three miles from BRONS, clear for the ILS one five approach...
Top


Some years ago I would have said the same. But music on CDs is so compressed nowadays and the dynamic range so low as a result, that I am actually sad to not have a turntable anymore. Vinyl records are usually a lot less compressed and therefore probably sound better. Besides the listening fatigue will be less severe after listening to a recording that did not fall victim to that stupid 'loudness war' (that is compression).
I support the right to arm bears
Top


No, of course not. CRTs age as a function of total operating hours (primarily in the electron gun assembly) plus aggregate brightness being used (in the light conversion layer). The high-voltage generation and deflection circuits operate under very heavy load as well and also age accordingly.

Put a CRT that has seen just regular use through a few years (not even close to 24/7) next to a brand-new one and the difference will be night and day. You just get used to the normal degradation over time, so it may not be as clearly apparent.


That isn't a change either. Some of the cheap stuff of today will also survive for many years. Not necessarily in smaller numbers. Most of the earlier stuff has been scrapped as well.
Top


Have to agree with that, Back when I was in the Audio and TV business we had a customer who was replacing his colour TV, must've been late'70s when some of the early adopters were looking at replacing their first CTV(yes we didn't have CTV here until 1974). This gentlemans TV had drifted towards green, he would not accept the new one until we adjusted it to match the old one!!
If your camera sends text messages, that could explain why your photos are rubbish!....well that might have changed!!!
Top

I think this was the pinnacle of the cassette format.....


Still enjoying good, old-fashioned, two-channel sound (after the W&K sequestered my listening spot for their HT setup) ... and demoted my (t)rusty Carver MXR-130 (picked up from eBay) to the bottom shelf. Has a passable phono section and plenty of oomph, but now shows signs of ADD... needing more TLC than I'm able to give. Fronted by Systemdek and driving 2-1/2 way speakers. 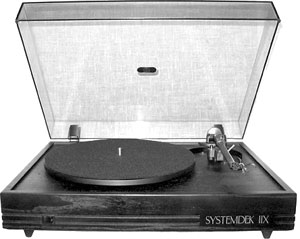 Of late, swamped by sources like computers, flash drives, XBox, PS3 and the web.

"Everyone is entitled to my opinion." - Garfield
Top
Post Reply