As a steam engine enthusiast I was curious about your favorite scenic railroads or railways. My favorite is the Cass Railroad in West Virginia as I am a big fan of geared steam engines. At Cass they have several Shays including a pacific coast shay,Heisler and Climax engines. Also Cumbres and Toltec and Durango and Silverton narrow gauge railroads are among my favorite to ride. This year in the states I am hoping to do the Georgetown Loop Railroad and perhaps the "Skunk Train" out of Fort Bragg Ca.

Having done Llangollen Railway and Snowdon Mountain Railway in Wales, my wife and I are starting to plan a summer trip in europe and are considering Viseu De Sus in Romania,The Harz in Germany or Wolsztyn in Poland. The Viseu De Sus was or is the last working steam logging railroad and have several Romanian built tank engines. However more research has to be done to determine if has scheduled tourist trains or rail fan meets. I am sure I will be able to enjoy some of the local brews and food.

Any information on other railroads or museums that are unique or operate rare equipment would be appreciated.

Democrats haven't been this angry since we took away their slaves.
Top

http://www.youtube.com/watch?v=QiIzUZUGROY
Ain't I a stinker?
Top

Those are some impressive photos.

That's awesome!
I'm going to make it a point to see that next time I'm in The Philippines.

Check out this famous train here in Thailand.

http://www.youtube.com/watch?v=wJpR9n-L680
Bring back the Concorde
Top

My favorite as a kid was the Georgetown Loop Railroad in Georgetown, Colorado. We probably rode it 4-6 times a year in the 1980s. I last rode it in 2007 and still enjoyed it.

I also liked the Combres & Toltec Railroad, in Colorado and New Mexico. I haven't been there in 10 years, but I plan to go again one of these days.

I also really enjoyed the train to Brocken in Wernigerode, Germany.

There is a neat little railway in Leeds, England that is kind of neat. It isn't the most scenic, but they have neat little locomotives that were built in Leeds. The fact that I got a cab ride only made me like it more.

My all time favorite was the North Yorkshire Moors Railway in Pickering, England. I will be heading there in June/July and plan to ride that train again.

My mug slaketh over on Falstaff N503
Top

The 1976 movie "The Cassandra Crossing" was filmed for quite a part on that route. First, the gentle hills between Basel and Delémont for some 40 km...

...then the railway cuts through several gorges...

and then aligns itself with two lakes, Lake Biel and Lake Neuchatel for about an hour.

Then, between Yverdon and Lausanne, you see the Jura hills on the one side and the northern Alps on the other. Between them, magnificient views of pastures. And at each larger city on that route, I recommend visiting the old town or the lake shore. Intercity trains run every hour.


And the best thing is: Despite it good views, it isn't a tourist-infested route!

The Arkansas & Missouri Railroad is a great railroad if you like old Diesels, especially Alcos. This photo was taken at the station in Van Buren, Arkansas in the summer of 2011. The A&M is a working railroad (ex Frisco) that also has tour trains.

Not exactly a scenic railroad, but the Rio Grande Zephyr route from Denver to Salt lake City was one hell of a trip, scenery wise. This was also the last non Amtrak intercity passenger train in the USA. The Denver & Rio Grande Western was one of three railroads not to join Amtrak. This photo (of me) was taken just before the last run out of Denver (the train stopped at Grand Junction due to a mud slide) on 4-24-1983. Oddly this was the same day that the last bond for the Moffet tunnel on the D&RGW was paid off.

My mug slaketh over on Falstaff N503
Top

Paris to Milan through the Alps:

http://www.youtube.com/watch?v=w7iaRf5bT2o
When all's said and done, there'll be more said than done.
Top

This is not a real railway but it is scenic. A miniature steam railway near my house: 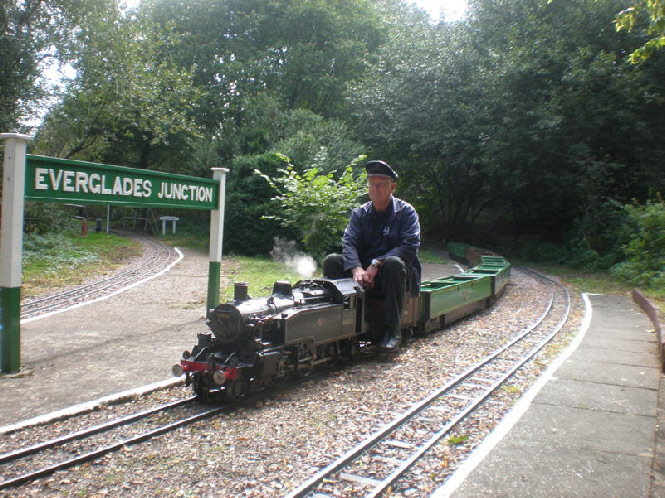 Also the train from Luzern in Switzerland to Stans and Engelberg was really nice. I have had the opportunity to travel on two wonderful scenic railways (using vintage equipment), one in the UK and one in New Zealand, recently.

Whilst I was living in London (2004-2007), I had the opportunity to travel on the Bluebell Railway. I rode on a train pulled by a giant green Golden Arrow steam locomotive and the carriages were all wooden with compartments. The Bluebell is PERFECT for any railfan! I loved it, and highly recommend it. I have lots of photos, but they are all on 35mm (from the Nikon F65 SLR I had at the time).


2) The Taieri Gorge Railway, New Zealand. Located in the Central Otago region of New Zealand's South Island, this vintage, excursion railway is headquartered in the city of Dunedin.

When I went to Dunedin to give an invited lecture at the University of Otago Faculty of Dentistry (April 2010), I had some time to explore this region for a few days before my talk. The most memorable experience I had was my journey on the Taieri Gorge vintage train that took me way into the Gorge. It was beautiful countryside! The train takes a leisurely journey through the Gorge, stopping once halfway and at the far end, before returning to Dunedin. If you go, plan to devote at least a half day for this wonderful journey. The carriages are vintage 1940s (?) wooden stock, pulled by a slightly newer diesel engine. I also took lots of photos of this journey.


Kind of a short trip, but I liked it. It is also a wood burning steam engine instead of a coal burning engine. I rode it in 1999


I rode that in 1996, nice long trip too - 4-6 hours with a lunch stop halfway through. Unfortunately the high altitudes gave me a headache and I couldn't fully enjoy the trip.
Top

The Grand Canyon Railroad is one of my all-time favorites. A trip in the dome cars can be pricey ($200 per adult, no kids under 15 yrs old) but is well worth it - the vistas are amazing as you travel through 4 different micro-climates along the route.

Source: http://www.thetrain.com/index.html
"Those who would give up essential liberty to purchase temporary safety deserve neither liberty nor safety!" B.Franklin
Top


When I was a kid it was oil burning Shays.


The Wabash, Frisco & Pacific Railroad in western St. Louis County, Missouri is a fantastic miniture steam railroad and runs along part of the old (pre 1944) Missouri Pacific right of way, on the Meramac River.
My mug slaketh over on Falstaff N503
Top

The Salzburg-Wörgl route (the historical Salzburg-Tirol route built in the 19th Century) is pretty scenic.

I take the REx (regional express) at 7.30 every morning to work in Salzburg, but the best part lies south of where I live (Hallein, in Tennengau) towards Golling, Pongau and especially Pinzgau.

Between Salzburg and Hallein, it is pretty flat, though the Alps in Berchtesgadener Land (DE) are visible. Once you get towards Golling (S. Tennengau) it becomes much more mountainous.

In Pongau, you ride along the River Salzach and pass through a number of tunnels. Also, the track going towards Pinzgau and Wörgl is along a rather high cliff above the river.

In Pinzgau (which is the best) as you approach Zell am See, you ride along the Zellersee (lake) and it is typically very pretty, especially when the weather is nice.

Unfortunately, almost all the trains to Innsbruck go through Germany now (As far north as Rosenheim, almost to Munich), so only the people on the Salzburg SBahn (sometimes going as far west as Saalfelden in Pinzgau), RegionalExpress get the „Whole Salzburg“ tour (except Tamsweg/Lungau). Trains from Bregenz, Zurich and Innsbruck to Graz and Kärten also use some of these tracks but not all.
Top


Thanks for the link. Looked it up on google and found some really nice pics.


My bad - you are right, they were Shays and oil burning. I just knew it was something other than coal burning - it did have a strange smell and the smell wasn't wood burning.
Top

Have yet to go on this, but really want to at some point http://www.thecog.com/ The Mt. Washington Cog railway (in NH). I've hiked alongside the track at various places before, watched it come into and leaving the stations, but never been aboard, partly due to cost and partly for other reasons.
"There weren't a ton of gnats there where a ton of gnats and their families as well!"
Top


It is a neat little railroad. I lived about 5 miles from it when I was in high school. My buddy's and I used to like to go and ride on it, but it was only open Sunday afternoons. I have been on it a lot as an adult too and my parents like to take out of town guests for a ride. Everyone always enjoys themselves and the place is always crowded.

The area around it was popular with 4x4 buffs and I knew a guy who stole one of their signs, when we were in high school. My buddy Gerry and I, who liked the railroad, threatened him with an ass kicking (he was way smaller than us) if he didn't return it. We took him down there one night and watched over him as put their sign back in the ground.
My mug slaketh over on Falstaff N503
Top

I like the Pikes Peak Cog Railway in Colorado Springs, CO.


FTW! lol, thats my local one, not a rail fan per-se but I love the engineering there and I'm only 4 miles from pickering, I love to hear the "toot toot" when I do my shopping. One of my neighbours is a volunteer on the line so I might go and see if I can get a "backstage pass" as it were.


The friend I stay with, when I'm there, lives in Thorton Le Dale, across from the Roxby Garage, at Pickering & Roxby Road. I like to drink beer at the New Inn, which is next to my friend's house. We should meet up and have a beer.
My mug slaketh over on Falstaff N503
Top

If any of you are in the UK and like railways then a visit to North Wales , so as to ride on their trains, is essential. Most are steam engines and narrow gauge , but there are some with normal gauge. The views from the mountain railway that takes you to the top of Mount Snowden is a must, especially if you get the steam engine puffing away at the back of you.
A couple of years ago a group of us based ourselves in Port Madoc and spent the week riding the different trains and it was great with some wonderful scenery. However I have to say the weather was perfect which is not always the case in Wales

The Flåm Railway in Norway: