Looking to start playing bass guitar. Any recommendations for a good electric bass under $300 or $400.
"The Judge Said 5 to 10, I say Double That Again" The Clash
Top

Laguna LB200 is a very good starter. Have one myself and continue to play it today! As for learning, just watch videos to follow what they're doing. In time, you'll have a good idea of how they're doing it and you'll learn it by ear. Of course tab is always useful as well. Any tab site should be fine. And of you use a pick, don't let "legit" bassists push you around for doing so.
A man is only as big as the amount of strings on his guitar.
Top

Ibanez Soundgear basses are good and fairly cheap. I actually still use them, though I'm thinking about upgrading sometime soon.

Pick, fingers, it don't matter.
I'm watching Jeopardy. The category is worst Madonna songs. "This one from 1987 is terrible".
Top

Go to Ebay. Do not buy new. Unless you like to waste money.
I can drive faster than you
Top

Plenty of used Fender Precession basses made in Mexico, South Korea and Indonesia floating around for $100.
In case you lose interest in playing, you've only lost $100 or you could resale it for same cost or pass it down to your son/daughter/nephew/niece.

Other than that, listen to Geddy Lee (Rush), Chris Squire (Yes), Steve Harris (Iron Maiden), Bernard Edwards (Chic), Stanly Clarke (Return To Forever), Verdine White (Earth Wind & Fire) and Rick James.
That should get you off to a good start.


Forgot to mention that. I've bought most of my guitars, basses, and amps used. Craigslist has been my friend.
I'm watching Jeopardy. The category is worst Madonna songs. "This one from 1987 is terrible".
Top

Get ready for lots of jokes headed your way: 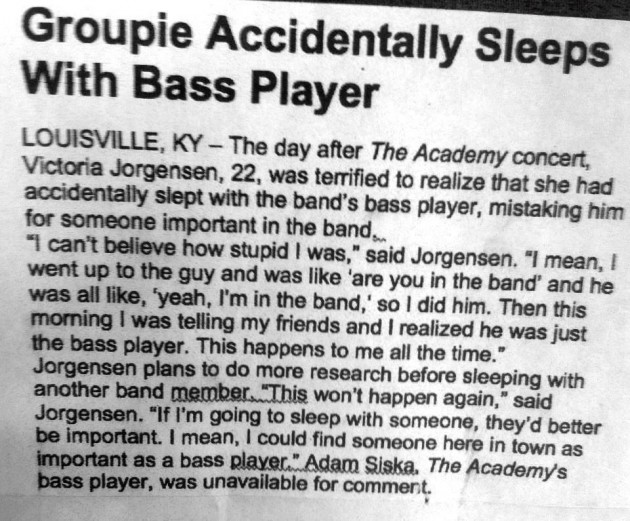 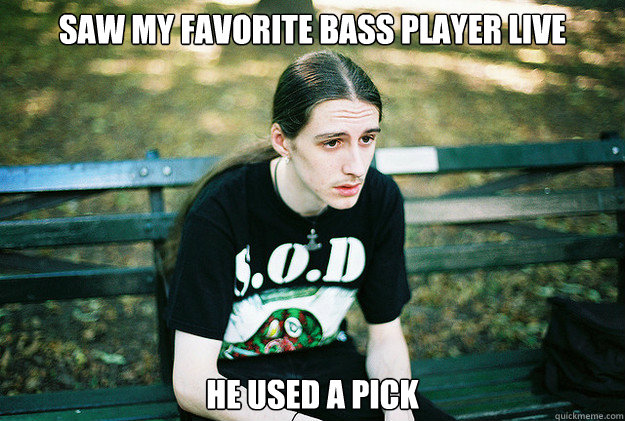 Some important reading for a newbie bassist:

And of course, a cautionary tale:

http://www.ultimate-guitar.com/news/...ng_gig_continues_playing_show.html
I'm watching Jeopardy. The category is worst Madonna songs. "This one from 1987 is terrible".
Top

Avoid Squier, or any bass you can buy from a non-music store (electronics stores like Future Shop often sell bundle packs with an amp, a stand, patch cable, etc for $200 or similar)

I started with an entry level Ibanez, and it served me well. Yahama basses start a little higher than Ibanez, but usually feel nicer and have a clearer tone at the high-end. A Mexican Fender is also a good bet. The two main Fender bass models the P(recision) and J(azz) have a slightly wider and thinner string spacing at the nut, respectively. Which one you prefer may depend on your hand size and playing style. Personally, I don't associate Gibson with basses.

Bass isn't the same as guitar. Don't be discouraged if you have friends, family, or bandmates learning the intricacies and how to shred on a guitar much faster than you're learning bass. I've found that bass is quite easy to get the bare necessities (less strings, hardly any chords, sometimes you'll just play a root note throughout a song) but learning more technical runs, keeping time, and getting the "feel" of bass is harder than learning how to shred on a 6 string.

And that feel is important. It's what makes a bassist rather than a guitarist using a 4 string, lower octave guitar. I'm not big on classical theory (I know a lot of it, but I'm not up to speed and it doesn't interest me much) but learning things like time signatures, what fret coincides with what note, and scales are key to improv / jamming. Often adding a fill, a run, or just mixing up the bassline is what it'll take to be noticed by the treble-obsessed masses. Follow the drummer but add licks like a guitarist.

Start by learning some songs with a noticeable bassline. Otherwise you might start becoming jaded or disinterested if you're just following a simple -4-4-4-4-4-4/6-6-6-6-6-6- for a while song. I have no idea what you're in to, but I started with early Deftones (from Adrenaline, RIP Chi) then onto Kiss (played a set in middle school of Love Gun, She, God of Thunder, and Black Diamond) and on through there. Thriller and Billy Jean are really fun little diddies to play, and only a bar or two each.

Set some challenges for yourself. Maybe you want to do the bass segment near the beginning of The Grudge by Tool, which I use as a warm-up. Maybe you wanna play along with The Trooper by Maiden, or mess around with harmonics like Love Blooms by Mudvayne, or the classic Portrait of Tracy by Jaco.

I much prefer the sound playing with fingers makes, by the way. Smoother and better suited to quick slides. It will hurt though, and both your fretting hand and your plucking hand will get sore, bloody, and eventually callused. Take care of your wrist, too. Experiment with how to use alternate plucking styles, especially when playing on stage. I often switch to thumb picking when my fingers or wrist start to act up, and keep a pick nearby just in case.

Popping and slapping will come in time. It coincides with a particular style and certain genres, for sure, and it takes some time to get down pat. There's a good change you'll break some strings if you're not careful, too, and that HURTS with strings of that gauge. Figure out how to tune using a tuner (and your ear). I once as a kid misread a tuner and overtightened a G string til it snapped, and damn did it whip me good. The strings aren't that cheap either - if you need to you can boil them in a pot to get some of the crud off of them. Others may disagree, but it's worked for me.

It's an incredibly diverse and fun instrument to play, and if you get good at it, you'll blow people away with how enjoyable a good bass player can be.
Top


Agreed.
This song by Rush got me in to learning how to play guitar and bass.


https://www.youtube.com/watch?v=WQgu0MpnKq8
Bring back the Concorde
Top


That can go both ways. It can also be discouraging to try and learn complex bass lines when you're new.

By the way, I should also make one other comment about this:


Though I'm a huge proponent of buying used, I won't buy off of Ebay. I generally won't buy any musical instrument if I can't try it out before purchasing. That's not quite as important for a new player, but you still want a bass that will be comfortable in your hands.
I'm watching Jeopardy. The category is worst Madonna songs. "This one from 1987 is terrible".
Top

Here's 21 rap bass lines to look at. Some of them are very simple and catchy. I've been messing around with these a lot lately. It's gotten me away from the constant Rush, Maiden, Slipknot, Metallica that I've been so used to playing!

http://www.youtube.com/watch?v=NaUJ9Va2WUA
A man is only as big as the amount of strings on his guitar.
Top

Wow, thanks for all of the great advice. I'm into a lot of 70/80s era punk and alternative such as The Clash, Echo and the Bunnymen, Psychedelic Furs, Pretenders, and The Jam. Current stuff I really like are the Black Keys, Arctic Monkeys, Plan B, and Stereophonics. I see the reference to avoid Squiers but a guy in a big US music chain, "GC", said the Squier Vintage Jaguar Bass is good for $199 b/c of the two different types of pickups - any thoughts on this one as it felt and looked good.
"The Judge Said 5 to 10, I say Double That Again" The Clash
Top


There are some good bass players in that genre. Although I'm not a fan of punk, I can get in to some new wave.
Check out Tina Weymouth - bass player for Talking Heads.
John Taylor (Duran Duran), Mark Lickley (ABC), Patrick O'Hearn (Missing Persons) and also listen to The Naked Eyes.
Bring back the Concorde
Top


If it feels and looks good, that's half of it. The other half is how it sounds.

Personally, I don't solicit nor listen to advice from "GC" employees (except for the drum guys, whom I've always found to be much cooler than the guitar/bass guys). In fact, drumsticks are about the only thing I buy at GC.

That said, as a total beginner, I wouldn't worry too much about how it sounds. Playability and comfort are very important, and your amp will have a lot to do with the sound too.
I'm watching Jeopardy. The category is worst Madonna songs. "This one from 1987 is terrible".
Top

1) buy any bass.
2) Put it in Tune with new strings
3) Learn this song: https://www.youtube.com/watch?v=hPAqEQ1_ctQ

Geddy Lee is a maniac! After playing several Yamahas, Ibanez, I ended up with the Squier Jaguar Bass (in transparent red!) $179 all in and got an Ampeg bass amp for the same price.

YYZ is gonna take some practice... I'll keep working on my Funkadelic "Cosmic Slop" which is challenging enough for me!
"The Judge Said 5 to 10, I say Double That Again" The Clash
Top

Keep us informed on how your finger calluses are doing!


Nice, my first bass was a Squier P-bass. Not the nicest piece I've played but for the money you can't go wrong, great low investment way to get into playing. Congrats!!
Top


Congrats. Now do yourself a favor and have a professional set it up. It might cost you a little money but it will be worth it. Have him install a relatively light set of strings (easier for beginners), and then set up the neck relief, intonation, string height etc as close to optimum as you can. There is nothing worse than trying to learn how to play without realizing that your strings are too high (more effort needed) or too low (buzzing), or where the truss rod needs adjustment.
Democrats haven't been this angry since we took away their slaves.
Top
Post Reply