It does look strikingly familiar.

But who buys these expensive dolls ? 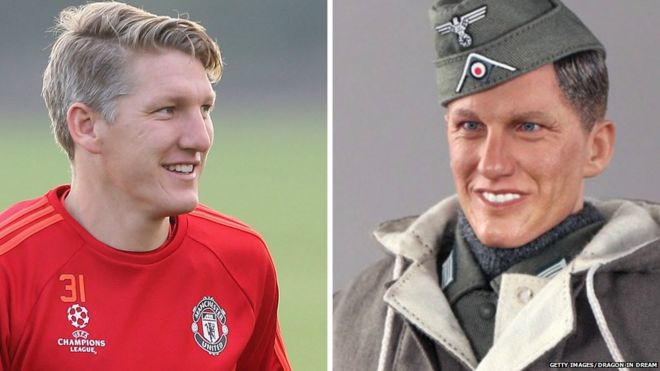 
He *does* look like what the Nazi's imagined the ideal German to look like. Tall, blonde, blue eyed, athletic specimen...I mean come on.
Top


When you're in a hole, stop digging. They need a new PR guy.

Who buys these dolls anyway?

Quick question. If this is a Wehrmacht uniform, did all such army uniforms at the time have the swastika insignia, or was that reserved for members of the Nazi party serving in the Wehrmacht? If it was part of the uniform worn by ordinary soldiers, calling all of them "Nazis" is a pretty ignorant comment by Amelung.
Top

A bit full of himself, isn't he?
Top

The Nazis made their party flag (the swastika) the national flag of Germany quite early, IRC in 1934 (replacing the black-red-gold of the Weimar Republic, which always was the colours of German democracy). From then on all German registered aircraft had to have a big swastika painted on their tails. This was done to make Germany as a nation equal to the NSDAP (and Hitler) as the political party.
All Wehrmacht and SS(Party) troops wore the eagle with the swastika. The Wehrmacht (Luftwaffe (Air force), Heer (Army) and Marine (Navy)) wore the eagle on their right chest. The SS, as a Nazi party militia, wore the eagle on their left upper arm. There were also slight differences in the design of the eagle between the different branches.

The uniform depicted on the doll is a Unteroffizier (corporal) of the Heer (Army).


Yes, but the doll (1) does look pretty similar to him, (2) he is legitimately famous (plays for Manchester United after years with Bayern), so they would know who he is in China, and (3) the doll is called "Bastian" and (4) it's a depiction of a soldier serving the Nazi regime, which can be a very sensitive topic for many Germans.
Top


Well he is German!


Why? Schweinsteiger (I had to google up who that guy is) is taking care of all the free advertising one can wish for.
Top


No, I meant the PR guy at the Chinese toy company with the old "well they all look alike" gag.


Interesting, and completely answered my question. So, reiterating my earlier point, ("To see him as a swastika-bearing Wehrmacht soldier also constitutes a gross defamation and insult," Ulrich Amelung said.) Amelung's choice of words are themselves defamatory as by pointing out the "swastika-bearing" part, but without clarifying that it was part of the uniform for ALL German soldiers.
Top


Anyone who knows anything about football would know who he is.
Top