It would last for 303 days, claim at least 300 000 lives and countless casualties on both sides, and probably end the hopes of victory for the Central Powers. 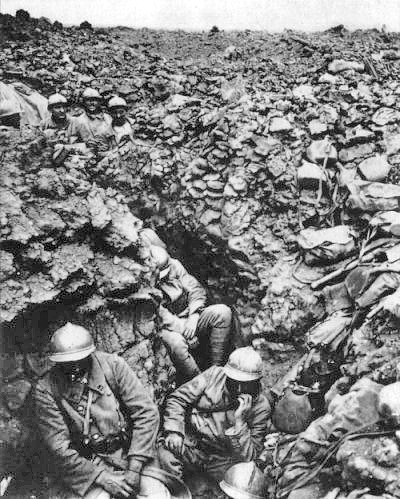 One of the more staggering statistics of the slaughterhouse that was the Battle of Verdun, was the fact that over the course of the 300 days the battle raged, some 60 million (some sources says only 30 million) shells were fired. That's an incredible 200,000 shells fired per day - or a 140 shells per minute. While most of it was obviously concentrated into barrages, the noise must still have been out of this world.

I recall reading a collection of letters and diary entries written by a Danish* soldier in the Imperial German Army, who served at Verdun for a brief period (He also served at the Somme later in the summer of 1916, where he survived a trench collapse which removed him from frontline duty, and had served at the Battle of Champagne in 1915), and one of the things that always amused me was how efficient the field post service was, even in the midst of these grand battles.

* Danish-minded citizen of Northern Schleswig, which was still under German control. 30,000 men from the area returned to Denmark following the war, served in WWI.
Top

I'm watching a show about it at the moment. Lots of archive footage slightly colored, and lots of letters and journals from participants. One woman in German Alsace-Lorraine writes that people are hearing the cannons. They're 200Km from the front !
Top

Danish Radio has also put up a pair of recordings with Danish veterans of the battle, with one of them being wounded so gravely that the doctors thought he wouldn't make it, and so when he finally awoke, he was in the sterbezimmer (room in the field hospital where lost cases were left to die).
Top

Bad year 1916 kicking off with Verdun, then the naval battle to end them all in Jutland, and culminating with the Somme, nearly 1.5MM dead in less than 12 months. This was Europe at its absolute peak of insanity, until 1939 came around.

But I'd take the mobile warfare of WWII over the trenches any day, no question.
Top


After the Treaty of Versailles Ferdinand Foch said "This is not a peace. It is an armistice for twenty years".
Top


Man, WWI was staggering in scale and yet unappreciated by far too many. I agree with you on warfare mobility. The thing that I have the greatest intellectual appreciation about from WWI is how much it impacted WWII. Young officers like George Patton, for instance, who saw the insanity of static trench war and then helped spur a real evolution in fighting doctrine, tank warfare, etc.

And the old line about fighting the last war again rings true.
Top

A few weeks back I caught an episode of Globe Trekker where they toured the battle sites of the western front. What I took away from the episode is the pure insanity of the war effort. While I did know about the trench warfare I did not know both sides undertook massive underground operations -- literally attempting the tunnel under each others position to lay in enough TNT to take it out. On one hand I can marvel at the engineering expertise to pull that off, but the sheer futility of what they did is just mind boggling.

This is the episode I watched -- http://www.pilotguides.com/tv-shows/...ker/series-16/world-war-1-special/


Patton was a cavalry officer, mostly based in headquarters and in training units, except towards the end of the war, when the war became mobile again and never really in the trenches. This, on the other habd, influenced many British officers, who spent WW1 as subalterns (a highly dangerous job) in frontline trenches. Montgomery, for instance, usually made sure that he had a local superiority in about everything before attacking to spare his men (the only time he gambled, during Operation Market Garden, he lost). Others, like Liddle-Hart, de Gaulle, Chukov and Guderian, developed, independently from each other and Patton, mobile tactics involving massive armoured units supported by mechanised infantry, artillery, engineering troops and close support from the air.


Joe Persico wrote a book about the final day of World War I.

He wrote about US General John Pershing, who said something similar. He wanted to continue fighting and not sign an armistice. He wanted to fight to Berlin because, paraphrasing here, "They (Germany) won't really feel that they've been beaten. Eventually we'll just have to do this all over again."
Top


I suppose that reflects the actions of some of the American officers, who ordered their men to advance against the Germans in the final hours and even minutes before the armistice went into effect.
Top


Every November 11th I try to watch this BBC special on the final day of World War I. It does paint a pretty poor picture of American officers who were ordering troops to continue fighting.
Top


When you visit Aarhus I recommend seeing the "mindelunden"


And that is why the European Union, despite its flaws, is the best thing we have and why pure national Solutions are no help.
Top


While WWI did it on a massive scale, this is something that dates far earlier than WWI. You guys had your own battle of the crater 50 years before that:

But it dates way farther than that. One prime example is the siege of Maastricht during the Dutch revolt against Spain where the besieging army dug trenches and tunnels to blow up the walls while the defenders dug their own tunnels to collapse those of the besiegers, or throw boiling water through them, or light fires to burn all the oxygen and asphyxiate them.


It was called sapping or mining and has been in use pretty much since the time people built walls around them.

In Germany, WW1 is Little more than a text book remark. For example, when I visited Ieper, you see british roses everywhere, while the german cemetary is almost forgotten.

IMHO, WW1, especially the Story how it started, must be remembered at all costs. Syria has some parallels.
Top