Very sad. She'd apparently been dead in her bed for a few days before anyone found her. 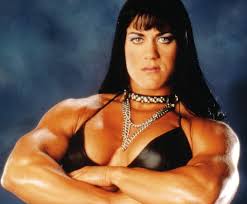 I liked her a lot back during the Wrestling days, and again on "The Surreal Life."

Hope she rests in peace.
I myself, suspect a more prosaic motive... ~Thranduil
Top

She wanted nothing more to be back with WWE and to be a aprt of the HOF. Now that she is dead they will brush all the stuff they didn't like about her under the rug. Look for a DVD to come out soon, and then HOF bound in in 2017.
Top

Lesson: That's what too much anabolic steroid does to you.
Never argue with idiots. They will bring you down to their level, and beat you with experience.
Top


I'm pretty sure she had more than that going for her.
OBAMA-WORST PRESIDENT EVER....Even SKOORB would be better.
Top

Such a shame and what you need to remember is how she was dating Triple-H for a long time and when he shacked up with Stephanie McMahon they gave her really bad angles and eventually forced her out. Heck at one point prior to that it was hinted she could have had a run for the WWF Heavyweight Championship, something that no woman has achieved yet (and given what's happened to the women's division over the last 15 years it probably never will).

She will be in the Hall of Fame, According to various sources they did want to induct her into it previously but were worried she would speak her mind and badmouth the company & now that it won't be an issue they could go ahead.

Phil
FlyingColours
Lifes a train racing towards you, now you can either run away or grab a chair & a beer and watch it come - Phil
Top


She should be. First woman to take the dudes upfront. Absolutely no justification for not including her.
I myself, suspect a more prosaic motive... ~Thranduil
Top


You make WWE sound like a real sport.
Top


Heh, that's what I was thinking.

Nevertheless, sad that she died so young, but can't say I'm entirely surprised.
I'm watching Jeopardy. The category is worst Madonna songs. "This one from 1987 is terrible".
Top


I don't think its a sport in the traditional sense but it certainly takes a lot of athleticism to do what they do. I just don't get the appeal of wrestling but I know I could never do what they do physically.
Top


Which is some sexist bullsh!t, as there plenty of current inductees were involved in sex/drug scandals before.

....que?
I myself, suspect a more prosaic motive... ~Thranduil
Top


This is the WWE we are talking about here...
Top

Glad the OP called it the WWF. That is what it should be called.


Steroid use almost certainly had nothing to do with her death. She died of an accidental prescription overdose.
Mangeons les French fries, mais surtout pratiquons avec fierte le French kiss
Top

The freakin' polar bears and rhinos can go blow it out their behinds... it was the WWF, and will forever remain the WWF to me.

Meaning?
I myself, suspect a more prosaic motive... ~Thranduil
Top


She had a very large clitoris, which resembled a baby toe.


They have had numerous people come forward from both inside and outside the company claiming sexism and the unfair treatment of women within the community. Watching it I don't find this very shocking.
Top

After all these years, have we discovered what The Rock has been cooking?
Top


Come now, you're not seriously insinuating that a 44yr-old man who's twice the size of his 27yr-old self.... is on something that's a little less-than-natural, are you?


WOW! That comparison is insane.

Anyway, does anyone still watch WWE on a regular basis and what are your thoughts on the current product? Has been very stale during the last few years, but with the introduction of NXT and new international talent being brought in (Finn Balor, Nakamura etc) things will hopefully improve with some sensible booking which maybe is wishful thinking with Vince still stuck in the dark ages.
Top
Post Reply