US Jews Advocate For Palestinian Cause.

US Jews Advocate For Palestinian Cause.

Maybe Israel's PR machine will need to work in overdrive from now on to stop this turning tide !

Oh boy, this thread is going to get interesting.

Okay, so a top PLO official says that American Jews are turning to Palestinian cause....Sure, I will go along with that as much as I go along with Trump's " Hispanics love me" quote.

Let's be honest here, the American Jews fall into 2 camps, those who couldn't care less and those who support the country of Israel.

I am still supporting these ultra-orthodox who say that the state of Israel should never have been founded before the Messiah returns.

American Jews have every right to criticize Israeli policy so long as it completely abandons traditional social justice provisos in Judaism. I know many who do just that.
Top


It may surprise you, but there is a lot of descent Jews around and the policies of the Israeli are helping a lot of neutral Jews make up there minds against those policies.
Top

While it is clear from interviews conducted by Pew Research that being Jewish does not mean blind, uncritical support of Israel it remains a fact that the majority of Jews maintain a strong emotional attachment to Israel. It also remains the case that a majority also regard caring about Israel as being part of being Jewish, with 43% stating it as being essential and a further 44% saying it is important but not essential. About 40% of Jews in the US say that they believe Israel was given to the Jewish people by God.

There is a trend that over time while Israel remains important for American Jews, it is not seen as central as it was in the immediate post-holocaust period. This may be due to the more liberal environment in which young Jews are growing up, increased intermarriage with non-Jews, more secular education.

Nevertheless, changes in attitudes towards Israel do not immediately translate into advocacy for the Palestinian cause despite growing belief that a two-state solution is both desirable and possible. Overall, 61% of American Jews believe so but among Orthodox there is greater pessimism - only 30% believe it possible - and only 35% of Jews who state their political affiliation as Republican believe so.

There is growing scepticism among American Jews that Israel is making a sincere effort to bring about a Peace Solution. But again this is not uniform. Older, Orthodox and Republican-leaning Jews are more likely to believe that Israel is genuine in its efforts while younger, Reform or secular and Democrat or Independent Jews are less likely to.

On the question of settlements it appears that the higher the education a person has received the more likely they will believe that settlement policy is hurting Israel's security. That believe is also more common among the 18-29 age group, with 50% supporting the proposition and only 11% saying it helps. Nevertheless, overall 17% believe settlements strengthen Israel, 29% say it makes no difference and 11% don't know.

Of much greater importance may be the attitude of non-Jewish Americans. 76% believe that US support for Israel is either not enough or about right with only 22% saying it is too much. We have been taught from a young age that if anything like Nazi Germany ever happens again, Israel will be there for us.

And I have no doubt it will. I'd rather spend my efforts making sure that nothing like Nazi Germany ever happens again.
Top


Education and sources of information are key for sure. The Jewish diaspora (even those of us who are secular) is typically keenly aware of the various goings on in Israel - either through family/friends or direct personal interest.

The Fox News/Newsmax crowd, in my experience, has a very poor understanding of what settlements are, and why they are so utterly illogical and damaging.


This is somewhat strongly related to the issue quoted above. These people are getting their information from their church pastor, word of mouth, Fox, and WTF knows where else...
Top


Its completely clear to the rest of the world and the UN, that the policy of settlements has to stop. Its been the issue of numerous UN resolutions time and time again over how many years now....

exactly what sort of education do Israelis children get, if they don't understand that basic rational in the equation ?

And more importantly, with the internet and news etc so readily available why aren't they (educated people) reacting more vocally against their Governments policy of settlements ????
Top


What evidence do you have that they aren't? Ever heard of Ha'aretz? Jewish Voice for Peace? etc...

It's also worth noting that a large number of people are voting with their feet, so to speak. Some estimates indicate among the hundreds of thousands of immigrants who have since emigrated, greater than 60% are Jews as well.


The issue is not necessarily the education of Israeli children. Don't forget that Israel has incredibly complex demography - there are hundreds of thousands of Jewish and non-Jewish immigrants from every corner of the globe, including South America, Ethiopia and Morocco for starters.

By far one of the greatest contributions to the sustained influence of right-wing politics in has been the nearly 1,000,000 Russian immigrants since the early 1990s. Yisrael Beiteinu is their most hawkish representative party, with anti-Palestinian psycho Avigdor Lieberman having just recently become Netanyahu's Defense Minister.
Top


It's hard for Israel to take the U.N. seriously on matters of legitimate concern when the institution routinely singles out Israel while ignoring others.

In the most recent General Assembly, 20 resolutions singled out Israel for criticism, while only 3 resolutions were passed against other states. The three resolutions were of the generic variety "ie Human Rights violations in DPRK, Syria, and Iran" whereas the resolutions against Israel were specific.

Here's an example of singling out Israel: resolution A/Res/70/70 which concerned the risk of Israel's non-accession to the Non-Proliferation Treaty concerning nuclear weapons.

Strangely, however, North Korea wasn't called out for it's failure to accede to the Non-Proliferation Treaty, even though it is actively testing it's nukes.
Top


The problem is - nobody reads them. Ha'aretz only speaks to about 2-3% of all Israelis, but abroad they do get quoted often because they're progressive and they write reasonable things.

The population of Israel has increased from 7.4M to 8.5M in the last eight years.

Seems likely much of that is immigration.

This means building more settlements, and expanding existing ones.

Hard to see where a Palestian state of any sort would fit in.
Top


Absolutely. However Israel prides its self on the highest principles, even though the world, and the UN, can see otherwise...

Perhaps this is a reason /
Top


Not the most reasonable approach in the age of nuclear weapons. Dispersal is key...


There may be those that think lasting peace is in the best interest of Israel and that a Palestine state is the best shot at getting that.
I have the feeling the much bigger obstacle are evangelical Christians, thinking that Jesus comes back when the Temple is rebuild....

On average Jews are not the most religious religious people: 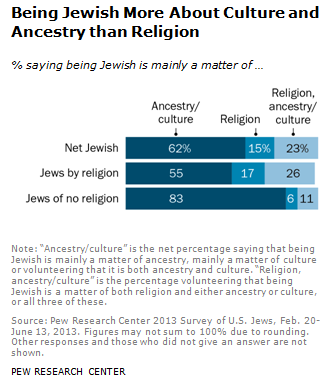 SOBHI51 wrote:
It may surprise you, but there is a lot of descent Jews around and the policies of the Israeli are helping a lot of neutral Jews make up there minds against those policies.

No it doesn't surprise me at all, mostly because I don't see it happening quite that way in my family and those around us.

Of course, my wife served in the IDF so there is some biased there, but mostly it's down to a simple fact, the younger generations are sick and tired of the older generations manipulating situations that cause the loss of life on both sides, this goes for the Israelis and Palestinians, not just on one side.

As I have mentioned in previous threads, two of our best friends are Muslim Palestinians, we have dinner with them a couple of times a month and of course discuss what is going on in the world, they are equally tired of the killing, but they are not naive in the whole thing, they know that it's both side provoking each other.

Now you also have to look at the bigger picture, with the rise in Muslim extremest attacks on US soil, do you honestly think the majority of US citizens could give a rats ass about Palestine ? With every attack they are just making life easier for Israel.
Top

bennett123 wrote:
The population of Israel has increased from 7.4M to 8.5M in the last eight years.

Seems likely much of that is immigration.

This means building more settlements, and expanding existing ones.

Hard to see where a Palestian state of any sort would fit in.

Then do what the civilised world does and build UP not out.
Top

bennett123 wrote:
The population of Israel has increased ...
This means building more settlements, and expanding existing ones.
...

Then do what the civilised world does and build UP not out.

Sure there has been a lot of immigration and that may well continue. But the drive to build settlements in the State of Palestine (West Bank) is largely political and ideological. There is a large part of Israel that is relatively under-populated in the central south and Negev. New cities could be built here but the infrastructure costs might be higher.

Part and parcel of the Israeli "idea" is that the area that is generally called the West bank outside Israel is identified with historical Judea and Samaria. This makes it of vital importance to those who have a religious connection to Israel over and above any strategic considerations based on security.
Top

tommy1808 wrote:
Quoting DocLightning (Reply 6):We have been taught from a young age that if anything like Nazi Germany ever happens again, Israel will be there for us
Not the most reasonable approach in the age of nuclear weapons. Dispersal is key...

Not necessarily. If someone decides to start rounding up Jews in Ethopia (which they did), they can flee to New Zealand, but there's no guarantee they'll accept them for asylum. However, if they flee to Israel, they'll accept them because they're Jews. And that's exactly what happened.

Not exactly a pleasant situation. I'd rather make sure that nobody is rounding anyone up.
Top
Post Reply