I have a quick question, are terminals 2 and 3 connected airside past security? On the LHR website, it makes mention of a pedestrian underpass but it is unclear if this is post security. Does anybody know? All contributions appreciated, thank you.

I have used the pedestrian underpasses between T1/T2/T3 in the past (T1 is gone now of course) and it was landside, providing connections to the Underground and Heathrow Express as well. At that time, buses were required to transit between terminals securely. I believe this is still the case, unless they built a secure underground passage I am not aware of.
Top

The underground walkway is landside only.
Question everything. Trust no-one.
Top

There is no airside passenger connection between any of the current main terminals at Heathrow, except by the Flight Connections shuttle buses.
In the past T1 and T2 were connected by airside walkway as they shared certain gates, but as T1 is now closed this is unusable.
There are walkable connections between Terminal 5 and its T5B and T5C satellites, though most passengers use the shuttle trains. To get between T2 and the T2B satellite you've no choice but to use a passenger tunnel.
Top

Andy33 is there a walkway between T5C and T5B?
I didn't think there was and funnily enough I had a flight from c last week having had a gate change from b to c so I'd looked for it and can't see one. Just curious.
Top

Even when connecting airside on the shuttle busses, you still must clear security at the terminal out of which you will be flying. LHR security can be very slow, as a very high percentage of bags seem to require additional screening and each lane typically only has one person working additional screening (and that person does not have much incentive to move quickly). It is maddening, actually.
Top

There is a connector walkway between T5A, B, and C. 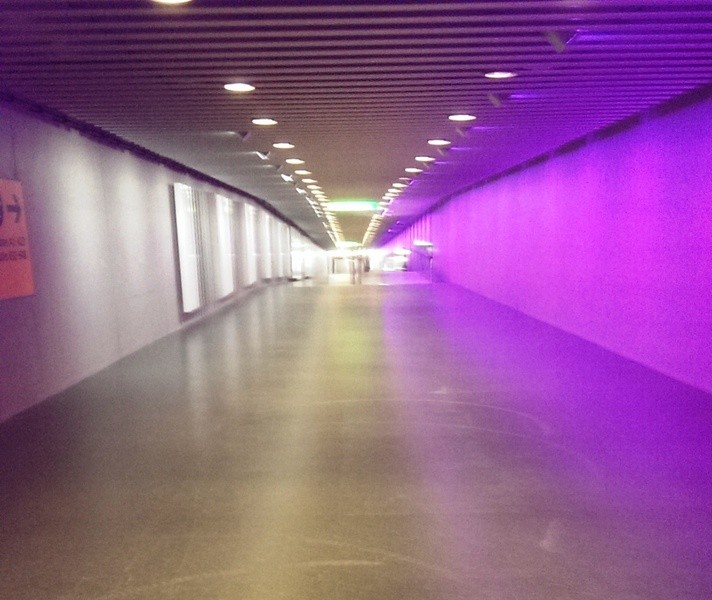 I've walked T5C to T5A and it takes about 10 minutes!
Question everything. Trust no-one.
Top

I love the walkway between T5A/B/C. I take it all the time; it is usually faster than the transit and the exercise is very welcome particularly after a longhaul flight.

Upon arrival, I have had "far too busy and important" people rudely push past me on the airbridge to the terminal in their rush to get out. (You have surely met the type; they are on every flight). Only for me to then arrive at the baggage hall long before they do, as I am either the first or among the first from my flight to arrive in the baggage hall. The pushy types, when they finally arrive, look at me with a puzzled look - clearly wondering how I got there before they did.
I only turn left when boarding aircraft. Well, mostly. All right, sometimes. OH OKAY - rarely.
Top

There are of course two walkways at T5A-B-C, one for departures and one for arrivals. For the Avgeek it allows access to the T5B/C to get close to the heavies and get some passable photos of departing traffic and BA action before heading back to T5A. And as a passenger it just allows some peace and quiet to stretch your legs, especially if arriving back from long haul. It's a much better prep for the UK Border Queue than the train.

You have to look for the walkways - the signs encourage people to take the transit trains.
Top

In all the times I have used Terminal 5 I was totally unaware of the fact that there are passenger walkways as well as the trains, I think on my next return into Terminal 5 I should check them out.
94 Countries, 327 Destinations Worldwide, 32 Airlines, 29 Aircraft Types, 182 Airports, 335 Flights.
Top

It's not advertised, you really just have to know. They were built for staff use but over time were spruced up and are now passenger friendly. To get from T5A to T5B/C, take the lifts down to the basement, not the escalators as they stop at the level above for the transit. Same getting back, you can't use the escalators, lifts back down and turn left back to T5A or right to T5C.
Top

n729pa wrote:
Andy33 is there a walkway between T5C and T5B?
I didn't think there was and funnily enough I had a flight from c last week having had a gate change from b to c so I'd looked for it and can't see one. Just curious.

Oh, there is. It is the continuation of the walkway from T5(A) to T5B. It was originally built for staff use and for evacuation purposes if the shuttle trains became unusable. However at certain times of day the trains are heavily over crowded and to relieve this the tunnels were opened up to general public use, and some sections of travelator installed. Because the shuttle trains aren't overcrowded between B and C (since many get off at B, and hardly anyone ever needs to get on, unless they have a late gate change or they've been using the BA lounge in B) they haven't put any real effort into signing the way to get down into the walkway starting from concourse level at B to C.
In standard UK airport style there is rigid segregation between departing and arriving passengers, so there are duplicate walkways. There's nothing to stop passengers who have cleared UK departure security from walking back against the flow through the departure side walkway tunnels from C to B, and/or B to A.
In fact if you had a gate change from C to B, you'd have to use this walkway since the train in this direction is for arriving travellers only.
Arriving passengers are restricted to their own trains/tunnels, and channelled to either Flight Connections or the UK Border. If you mingle with them, you need to be rescreened by security and immigration before you can get back into departures.

Edited to add: as has been said, these walkways are tunnels directly below the shuttle train tunnels, and are accessed by lifts/elevators -you go down one more level compared to the shuttle train stations.
Top
Post Reply