OE-LVE scedule on it's last day of operation for OS:

If you enter the reg. OE-LFO here:
http://rzjets.net/aircraft/index.php
you get also OS as current owner since 28 Dec 2017 but with new reg. OE-LFA...
...strange

This is your pilot speaking. Welcome to flight one from here to there. We'll be flying at a height of ten feet, going up to twelve and a half feet if we see anything big. My copilot today is a flask of coffee. 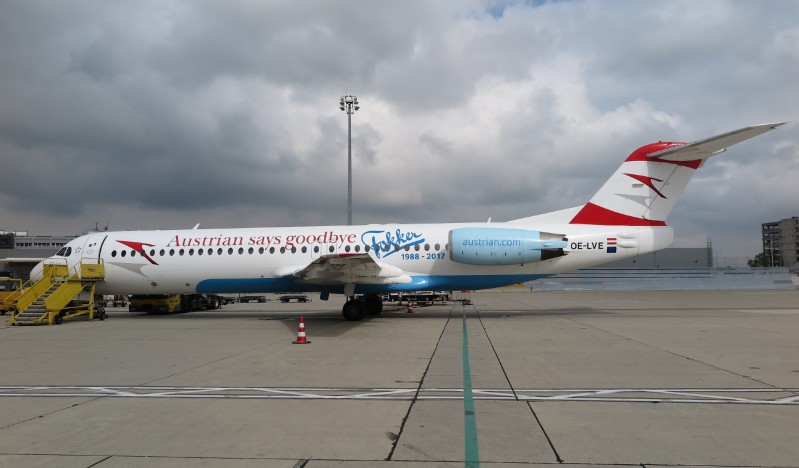 Good bye! Thanks for reminding us to this.

It would have been a nice touch if the last flight could have been to the birthplace of these Fokkers: AMS.
Many happy landings, greetings from The Netherlands!
Top

Fokker (the company) started in Germany says wikipedia, never knew this. Where was the factory?

Anyhow there are still some chances to fly the fokkers in europe. I flew the fokkers from OS ofter between AMS-VIE, loved it.
Top

These Fokker 70's were born in AMS. The company well yes and no, that depends on what you regard of starting a company? Anthony Fokker builds his first airplane in The Netherlands, De Spin, 1910, he flew it on 1 September 1911 above Haarlem. He moved to Berlin in 1912 to establish his company.
Many happy landings, greetings from The Netherlands!
Top

Was hoping to get on the last flight but prices were ludicrous.
Top

Loved flying the Fokker out of INN. Much more comfy than the usual Dash-8. They'll be missed!
Top

There should be a market for these planes, shouldn´t there? Australia, Cyprus, Kasachstan and Iran comes to my mind.
Top

Wondering if 7P will try to get those ex-OS Fokker 100s.
"Insert Generic Signature or Quote" - Generic Name
Top

redcap1962 wrote:
OE-LVE scedule on it's last day of operation for OS:
curious though that planespotters lists OE-LFO again as beeing with OS, though with remark stored:
https://www.planespotters.net/airframe/ ... s/9aRLC28Y

Meanwhile the entry showing the a/c returned to OS has disappeared. Obviously a mistake...
This is your pilot speaking. Welcome to flight one from here to there. We'll be flying at a height of ten feet, going up to twelve and a half feet if we see anything big. My copilot today is a flask of coffee.

Fairwell Fokker. The Fokker 100/70s were very likeable planes and I bet many on here will hold fond memories of these birds with Austrian, KLM etc. I have a photo somewhere at Manchester where there was a BMI Fokker 70 , Austrian Fokker 100 and a KLM fokker 70 all taxing out in a row.
Top

GianiDC wrote:
There should be a market for these planes, shouldn´t there? Australia, Cyprus, Kasachstan and Iran comes to my mind.

The complete fleet (15 F100 & 6 F70) has been sold to Alliance Aviation Services Ltd., Australia. According to OS-sources maintainence will still be carried out by Austrian Airlines Technics (ATB) at BTS. Obviously there are no such possibilities in Down Under and the ferry-flights half across the globe are economically justifiable.
This is your pilot speaking. Welcome to flight one from here to there. We'll be flying at a height of ten feet, going up to twelve and a half feet if we see anything big. My copilot today is a flask of coffee.

I will miss my frequent SZG-FRA and SZG-VIE trips on the Fokkers. Comfortable and a delight to fly in.

I miss flying in and out of SZG generally, too!
Top

Dutchy wrote:
[...]Anthony Fokker builds his first airplane in The Netherlands, De Spin, 1910, he flew it on 1 September 1911 above Haarlem. He moved to Berlin in 1912 to establish his company.

Those early Fokker years were really extremely dramatic. Keep in mind that Fokker had been a supreme league player at that time, only to be compared to Boeing and Airbus today.

Anthony Fokker moved the factory from Berlin to Schwerin. Here is a photo from the ceremony when Fokker had been awarded the the Cross of Honor by Frederick Francis IV, Grand Duke of Mecklenburg-Schwerin.

After WWI Fokker started a courageous coup in order to prevent the Entente allies from confiscating his property. By establishing a mock-up coal trading company in the Netherlands, he could transfer all of the Schwerin, Germany based equipment to the Netherlands by rail. This way everything had been saved from being grabbed by the governments of France, the UK or the USA.

The historicall Fokker sites in Schwerin had been wooden constructions with loam basements and their actual condition is really bad. However, the local/state of Mecklenburg government has promised to restore them as historical monuments.

GianiDC wrote:
There should be a market for these planes, shouldn´t there? Australia, Cyprus, Kasachstan and Iran comes to my mind.

At this juncture, the airlines that would have bought Fokkers have newer more efficient options.

Really sad to see them go. When I heard that the Austrian Fokkers would be retired, I booked a short trip to BEG in August, specifically to be able to fly the type at least once in my life.
A splendid adventure, with my seat chosen specifically next to that beautiful Tay 650. I was not disappointed at all and I still feel tat the F100 has so much more character than the E195 that brought me back home again.

I flew on OE-LVM which seems to have been retired a while ago as well. 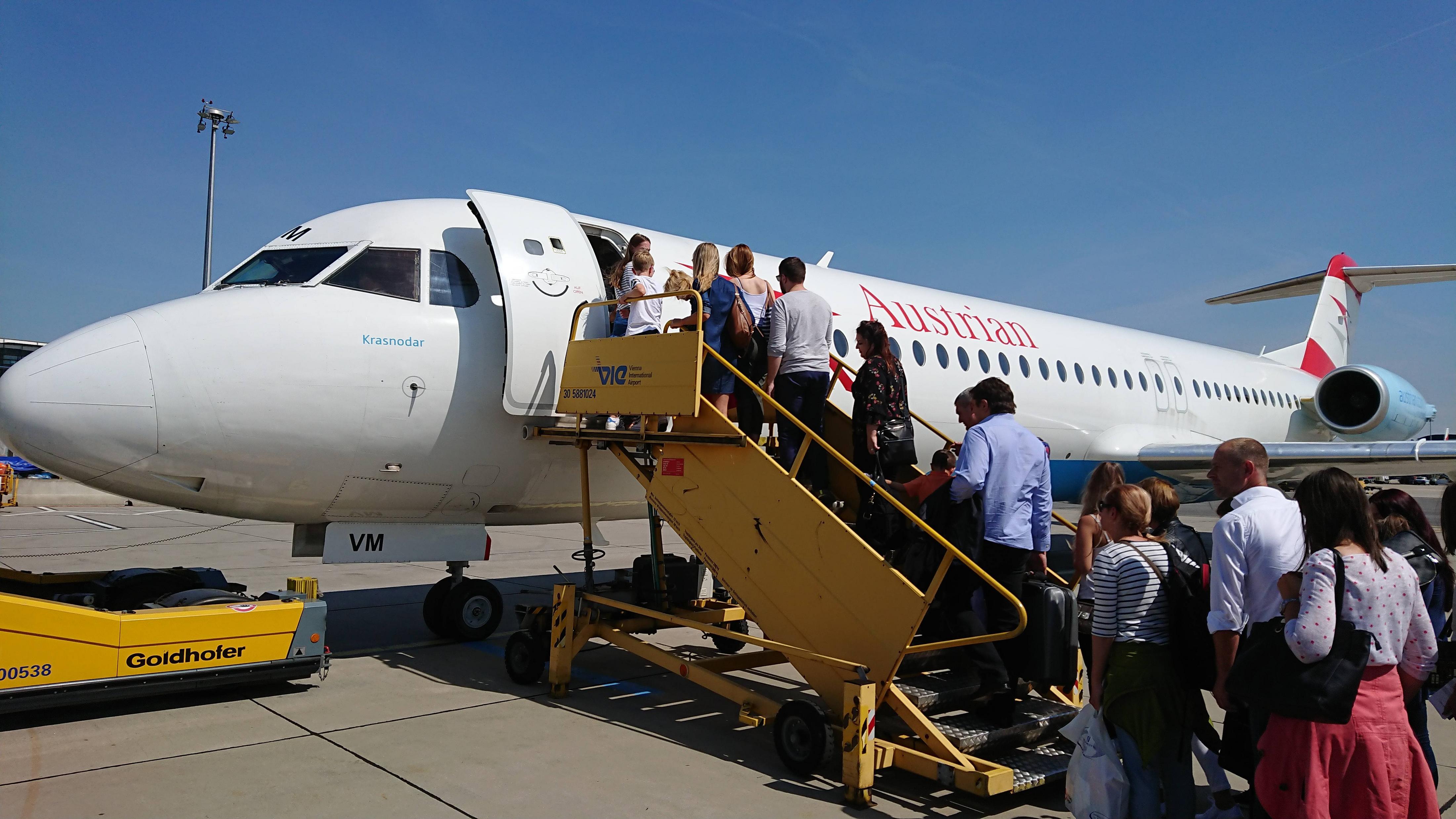 Flew them on AA a few times in the early 2000s. Comfortable enough planes, and enabled mainline service on routes like OKC-ORD which have been all RJs since.
Top

devron wrote:
Fokker (the company) started in Germany says wikipedia, never knew this. Where was the factory?

There is already an excellent reply from @kilopond, with some interesting and curious detail, to which I would like to add a little more.

Fokker was originally primarily known for it's WWI fighter aircraft, such as Baron von Richthofen's Fokker DR.1 "Dreidecker" Triplane, which as you can see featured a non-standard bright red camouflage 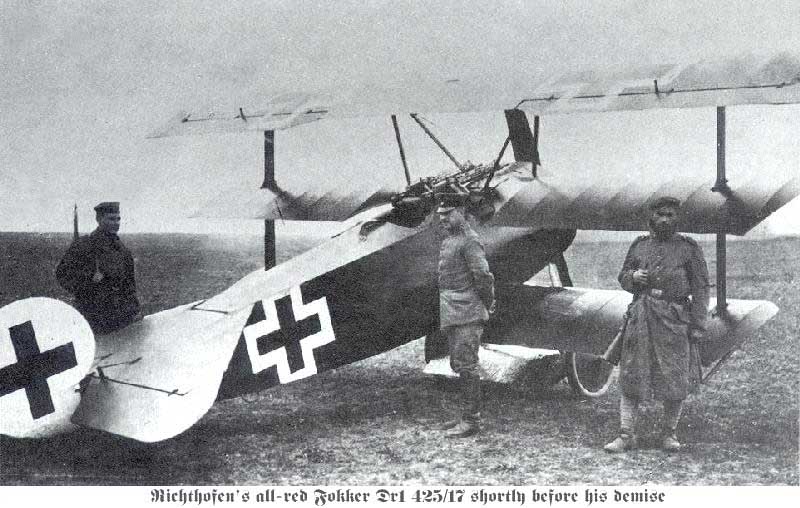 Possibly less well-known was the Fokker D.VII, which appears less striking, but was a real wolf in sheep's clothing. To put things in perspective, Germany produced around 3,300 Fokker D.VII aircraft in the second half of 1918, which is a ridiculous production rate for what was a new design. Fokker's contribution to WWI aviation was immense.

After the war, as @kilopond mentioned, escape to the Netherlands in 1919 allowed the company to continue with civilian aircraft, which eventually brings us up to the Fokker 100 which is the subject of this thread..

ps. Fokker are of course totally unrelated to the manufacturer of the FW.190 & other fine WWII aircraft, Focke-Wulf. Some of their designs even had civilian applications, such as
the four-engined Fw 200 airliner which flew nonstop between Berlin and New York City on August 10, 1938, making the journey in 24 hours and 56 minutes.

I also suspect it is Focke (as opposed to Fokker) who are indirectly responsible for the origin of film title "Little Fockers", harking back to an old, old WWII Battle of Britain joke, re-told here by Stan Boardman somewhere in the 1980's. It's not the best telling of the story I have heard, but it's the only version I could find on youtube
https://www.youtube.com/watch?v=-8Yf5B6GbYk
(warning - if you click on this link, you are going to hear the word "Focke", numerous times)
Nothing to see here; move along please.
Top

Are there any other Fokker operators?

Still sad to see the jet go. I assume the E-Jets OS is getting will replace the Fokker aircraft?
Top

NichCage wrote:
Are there any other Fokker operators?

Network Aviation, also in Australia, is a big user of 100s with 16 in active service and 1 in storage. It operates for QantasLink and on large range of charters.

Alliance is a big acquirer of Austrian's Fokkers: http://australianaviation.com.au/2015/1 ... ker-fleet/
"Everyone writing for the Telegraph knows that the way to grab eyeballs is with Ryanair and/or sex."
Top

OE-LVE, the last Fokker in service for OS, was transferred to BTS on Jan 18. On this occasion it made what seems like a photo-flight incl. a low pass at VIE (FR24-data seem to be slightly incorrect regarding the exact flight-path regarding the latter though...).
https://www.flightradar24.com/data/airc ... e#10290b45
This is your pilot speaking. Welcome to flight one from here to there. We'll be flying at a height of ten feet, going up to twelve and a half feet if we see anything big. My copilot today is a flask of coffee.

Although inevitable, it is still sad to see Fokkers dwindling away from the skies in Europe, having been gone in N.Am. for quite a time. One of my favorite short hoppers were the F100/70, and I will have many happy memories of them: BD BRU-LHR; OS VIE-FCO; KL more than I can remember (MRS, BLQ, BRU, GLA...). I even recall one trip in the from BOS-BUF on an aging US F28 in the early 1990s and being on AA F100 just weeks after 11 Sept. restart of flights. They'll be missed :-/
On topic however: How did Alliance end up being so Fokker-friendly? I wouldn't have expected that from an Australian regional carrier.
Oh stewardess, I speak jive
Top
Post Reply