According to Skyliner, VS's former G-VFIZ is currently on it's way to SZB Kuala Lumpur from LDE. Reason ?
Would this flight have VS crew drafted in to operate it ?
Top 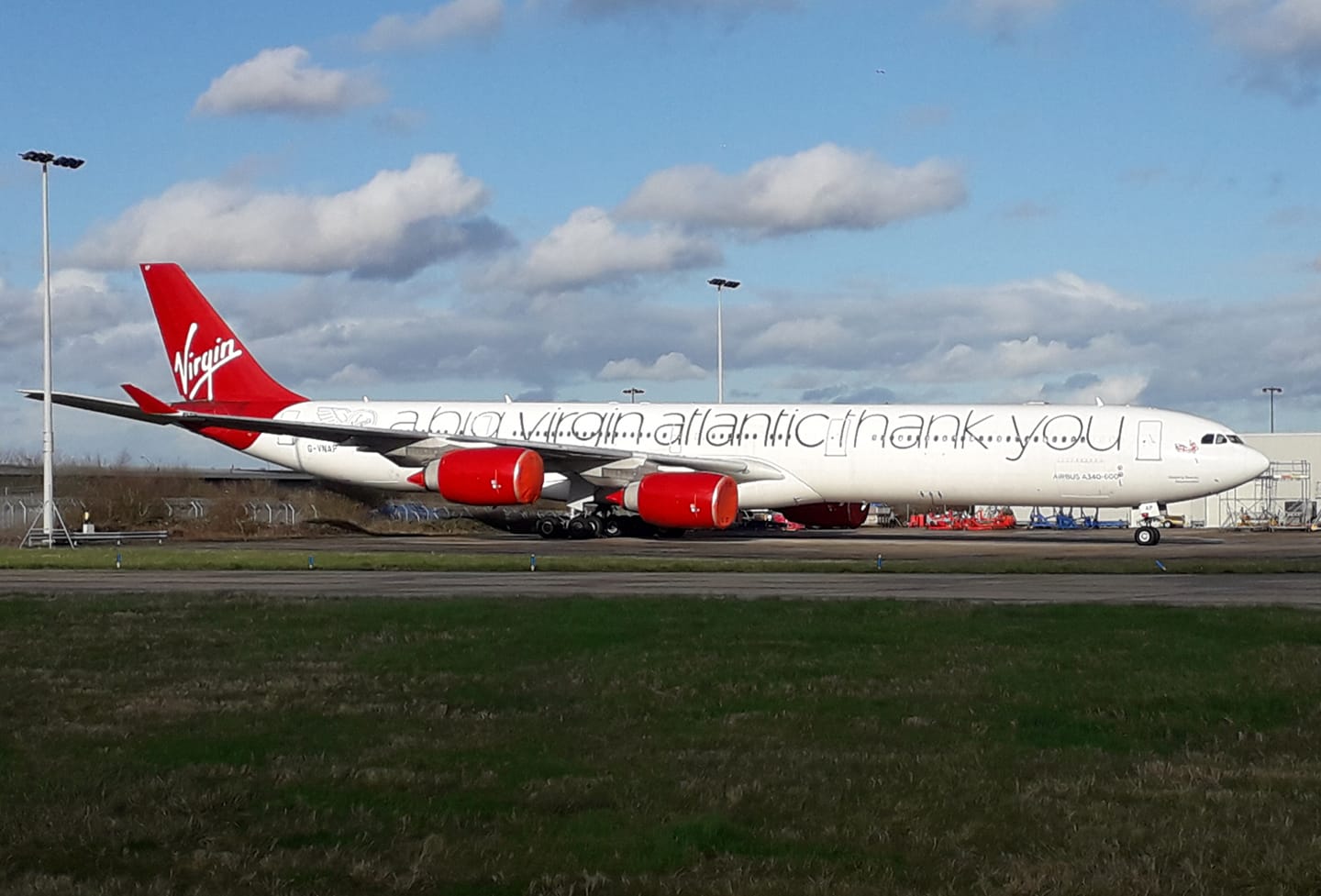 I'm going to miss these beautiful, elegant planes. We used to see these here in MCO on occasion as temporary substitutes for the usual B744's.

Now the coundown starts to the eventual retirement of the B744's. It has been great seeing these big, old planes coming to our town every day. Does anyone have any insight when these Y-heavy 744's will be retired for the A350-1000's?
Top

I remember having a look around VSHY when it first arrived. The cabin seemed to go on forever.
Top

When was the last plane in the four engines for long haul livery repainted?
Top

VFIT is still like it. It just had the slogans removed.
Top

Well the good news is, after the mass hysteria is over and people have had enough and start living again, the Airlines left standing may find Jet A at $1(US) a gallon. It's already over 30% down from this time last year.
Top

I'm going to miss these beautiful, elegant planes. We used to see these here in MCO on occasion as temporary substitutes for the usual B744's.

Now the coundown starts to the eventual retirement of the B744's. It has been great seeing these big, old planes coming to our town every day. Does anyone have any insight when these Y-heavy 744's will be retired for the A350-1000's?

Starting next year when the final batch of A350's come in.
Top

A few shots of the A346 in her various VS liveries: https://flic.kr/s/aHsmJg3n44
Top

I think because his airline was operating two types of 4-engined aircraft and he wanted people to feel safer flying on them irrespective of the improvements in engine reliability! I don't think it was a statement of principle so much as a tactic to win over public opinion in Virgin Atlantic's favour. Virgin are certainly fine with twins now even though "you're only one engine failure away from an emergency".

Personally I love 4 engines around me when I'm going somewhere. Branson didn't need to advertise to me - just as well, since he wasn't!

I only ever travelled in VS's A343 and A346 in cattle class and preferred the A343, possibly because the VS entertainment fit in the A346's seats really gave me the sense that I was being strapped into a pod and that the windows were almost optional, it was horribly claustrophobia-inducing and not a great way to spend over 11 hours. I half expected there to be a tube to stick into a vein for sedatives and nutrients, and a stimulant for waking us all up at the other end. The upside of the A33x and A34x is obviously that for couples travelling, you get the seat pair to yourselves and can become comatose in private.

We get all our impressions of an airliner's virtues from the cabin fit unless we're geeky or tribal enough to have a prejudice.

I got to have a final trip in a VS 744 in late February, BGI-LGW. Best 747 trip ever, up in the top cabin and half empty, with open seat rows in front and behind, and with 4 engines yet well away from the noise. Nice also to be close to the yaw axis, for someone very motion sensitive like me that can make all the difference. I made great efforts never to be right up at the back of an A346, getting stirred around by the autopilot!

For me, the "lookers" in the A34x series were the A343 and the A345, where the proportions just look right. I never really got along with the look of the A346, which felt like a stretch too far to me. Yet when I was a kid the DC8 was only sexy in the 70-series models.

Ah well, next time we get to fly VS it'll be all twins whether we "approve" or not!
No society can call itself civilised when the sick are denied for lack of means.
A Utopia worth the journey
Top

G-VFIT has also just arrived at PIK. As I understand it, the secondary runway will be used for temporary storage purposes.
Top

There is always the option of buying back maintenance items.

Also some items are required to be returned with full life or half life... if full life required the operator may nego to return with half life but pay xx amount.

Don't know if this is the right thread for it, but today a Virgin Atlantic A330 (G-VINE) left London Heathrow LHR for storage at Ciudad Real CQM.
Top

jghealey wrote:
A few weeks ago an ex-VS A346 was delivered to Azman Air in Nigeria from BOH (in an especially weird configuration), might this be what's happening to the others?

Out of curiosity, what was so weird about the configuration?

Loads of hand-me-down VS economy seats (in various different styles if I remember correctly) and just TWO business class recliner seats at the front on the aircraft, exposed to the rest of the cabin:

I believe they got the A346 to use for seasonal Hajj flights like Max air uses their 744s for. For those flights I doubt they are particular about the interior look.
Top
Post Reply