During the Summer of 1992 Seville Spain hosted the World Expo, Expo '92. Some US airline, I'm not sure which but it could be TWA, had service to Seville that Summer.
Eastern Air lines flt # 701, EWR-MCO Boeing 757
Top 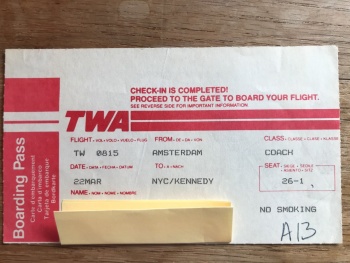 AMS and BRU were mainly served with the L1011 but subs were not uncommon. CPH and ARN were also mostly 762s but also saw some L1011s.
Top

Coexstud wrote:
AA didn’t have any 747 on property in 91 they were either sold or wet leased to other carriers or governments by then

American had the 2 747SP's until 1994. One went to Kazakstan Airlines N601AA. The other, N602AA went to the United Arab Emirates Government.

Those SPs were leased from TW. At the end of the lease they went to MCI to sit on the apron outside the TW overhaul base for a couple years until they were scrapped onsite.
Top

Karabu covered the entire network but excluded tickets sold via codeshare including those on TWExpress. A lot of the Mexico flights that TW launched were essentially pre-sold charters with only ~10 sets for sale in Y. That's what made them profitable. There was a lot of effort in the end to get a codeshare deal with America West which likely would lead to a merger as Karabu ended. But the money didn't last long enough.
Top

It was one of those situations where TWA sold the flight as "direct" from another U.S. city to an international destination with a scheduled change of aircraft.

However, TWA also sold flight 888 which was one-stop service from Boston to Athens. Departing Boston at 3:17pm on a narrow-body aircraft switching to the 747 at JFK.

It was sold as a thru-flight despite the change of aircraft.

Interestingly, the narrow-body flight from Boston to JFK at 3:17pm was actually flight 927 UNLESS you were continuing onto Athens, in which case, the same flight was 888.

It was all about being able to sell it as a direct flight. Pan Am was another carrier that did this a lot.

AA did the same. For example in 1989 AA98/99 was JFK-BRU-HAM and return. But AA also sold and marketed an ORD-BRU-HAM direct flight, flight numbers AA2816/2811 all the way through. But even with that one flight number AA2816 on the ticket you would end up on the ORD-BRU-DUS aircraft for the first segment (with a different flight number) and change to the aircraft flying JFK-BRU-HAM under the flight number AA98 for the last segment.
My Instagram Account: Instagram
Top
Post Reply