No one has a definitive answer about the initial berths?
Top

I suppose there might have been more opportunity for shenanigans in a sleeper berth than a regular seat, but I don't think that's what you're really intending to refer to.

Very interesting thread though, I wish I would have been born earlier so I could have experienced these old piston birds first-hand.

I was referring more to the experience- It was sensual; the food, the service, the giant bathrooms. Maybe a better word would be indulgent, but the idea remains the same.
Top

Thanks to an article I bought on eBay introducing the PAA 377, the answer is now clear. It was dependent on the sleeper vs non sleeper flight as to how many passengers were loaded.

If the berths were going to be in use, they limited the passengers to 3 per group of 4 seats in a berth. That math checks out as there were 9 berths total x 3 people per berth setup which equals 27.

Very interesting and obviously was rectified with the sleeperette seats which came into the picture relatively quickly. 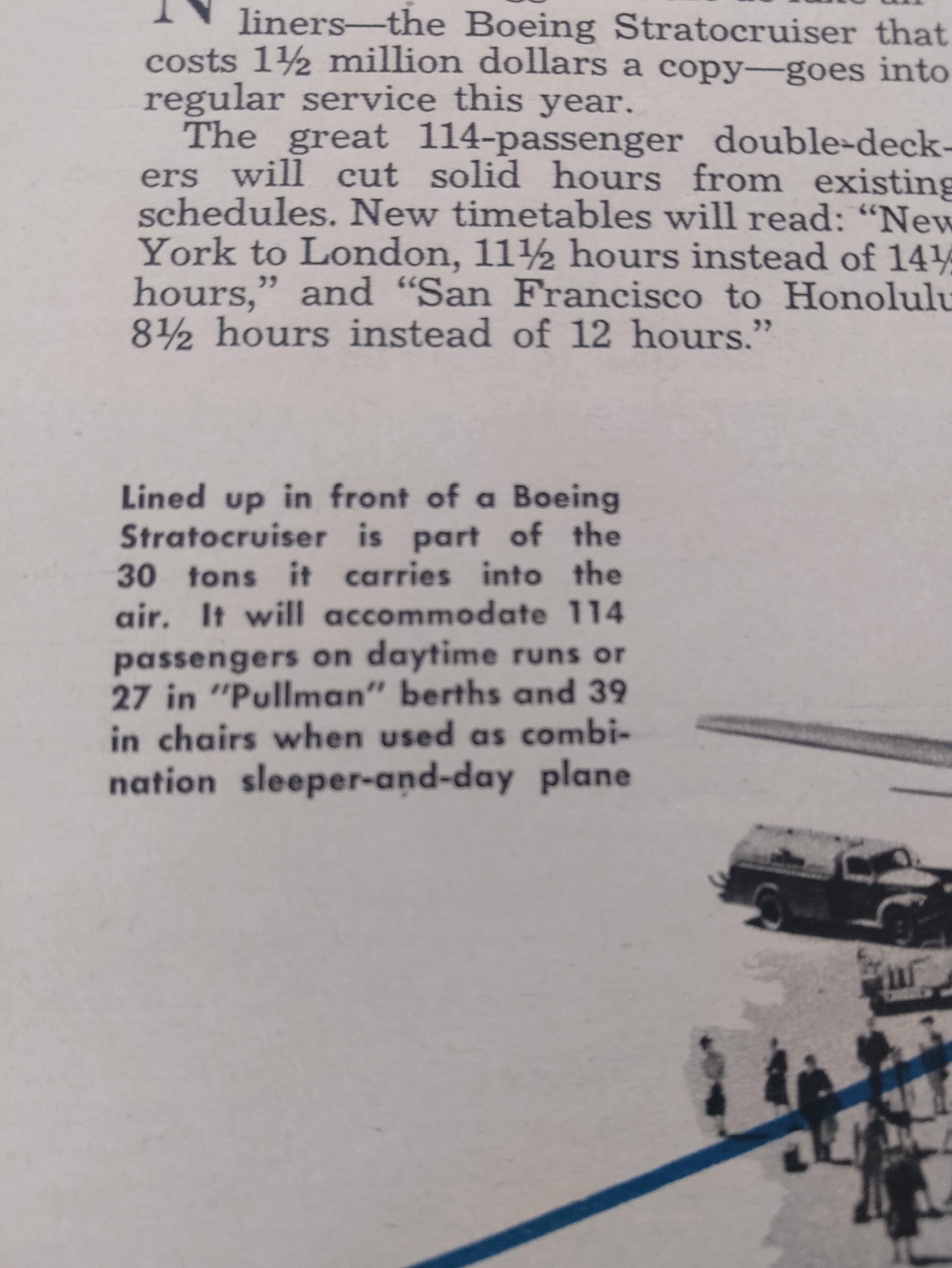 Also interesting to note that the article says the 14 lounge seats were saleable which was where they got the 39 night time chairs- 25 non berth chairs and 14 lounge. We know the lounge seats would ultimately not be sold though.
Top

wernerga3 wrote:
I’m still curious about the pre-sleeperette 4 seat bed setup situation that was not in the luxury suite up front. I would imagine that the Bottom berth pairs of 4 were sold to up to 3 people since the bottom slept 2 to a 4 seat bed conversion and the the top slept 1. Which just seems strange.

Two possible answers. One is just that flights were never that full and, on the initial configuration, they could put all the folks who didn't pay for the berths in the back, and then space out the people who did in a way that would use the space most efficiently. Second, my guess is that they sold the flights differently depending on time of day and stage length. So on true sleeper flights, they couldn't sell all the seats forward of the stairs. But then if there was a shorter daylight tag-on, they could then sell every seat as sleeper service would not be offered. That is how TWA did it with the berths on the Super Gs and 1649s. Flight 102, for example, was LAX-MKC-STL-DCA. They offered sleeper service only on the red-eye first leg and the STL tag-on. The berths were put away for the morning STL-DCA leg. Overall it looks like Pan Am fixed it with the sleeperette concept where they sold the seats and berths separately.