QinetiQ 1 launch now set for Wednesday 3 September.
Pilots Andy Elson and Colin Prescot and the QinetiQ 1 team have just announced that the launch of the QinetiQ 1 balloon mission has been postponed for 24 hours, due to weather conditions, until the morning of Wednesday 3 September.
The delay is due to unfavourable cloud formations at 6,000, 9,000 and 16,000 feet. These would have posed an unnecessary risk to the mission.

Good Luck to Andy and Colin!

Interesting to note that the reason for todays delay, the lower cloud, would probably have made the balloon wet and as it got higher would have caused the water to freeze adding about 4 tons to the weight. This was likely to restrict the altitude to 90K.
Top

Should be lifting off at 8.30 tomorrow morning live on BBC1

Im also going to be watching!!
Finally, a British Record?????

I'm surprised there isn't much interest in this... it hasn't been mentioned once on GMTV.. only the BBC seem bothered about it 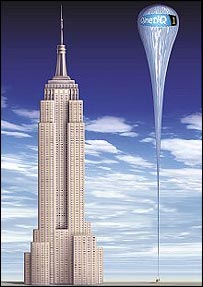 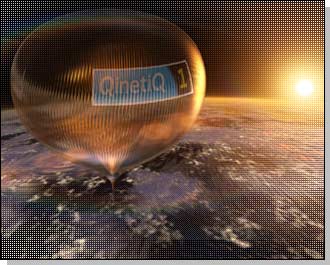 I remember posting about this a year ago to a total lack of interest!
As it turned out, the weather was never suitable for a 2002 launch.
But here is a link, and it has many good other links too, about this project, the ultra-light unmanned aircraft that will film them, the history of ballooning at high altitude and more;

Getting good coverage here (Farnborough Hants) as Farnborough is the home of QintetiQ (what a stupid name). I have my reservations about this project as it is essentially a publicity stunt to try and get the QinetiQ brand some worldwide attention. From what I can gather there is going to be very limited scientific or engineering knowledge to be gained from this effort - only major embarrassment (or worse) if things go wrong.

I am all in favour of record breaking - I was right behind Richard Noble and Richard Branson (what is it with "Richards") in their various projects. But they were individuals fulfilling personal dreams and putting their own heads on the block if things went wrong. QintetiQ is a former government defence agency (previously DERA, DRA and Royal Aircraft Establishment) and is still part funded by government money (the bulk of its income - 80% - comes from MOD contracts) and I don't think this is the kind of activity they should really be engaged in.

All the same, I hope all goes well.
Top

Just to let you know, the inflation process has been halted because a serious tear has developed in the envelope.

Is the effort doomed?
Top

To answer my own question - yes. Attempt has been abandoned for the year.
Top
Locked