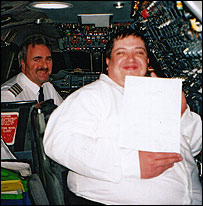 Wow! What do they mean by stone? Any why pay $300 for shampoo when buying a ticket might be cheaper?
Life is better when you surf.
Top

Good for him! A dream realized...and a healthier lifestyle to boot.

Of course, if he were American he would have been preparing to sue BA if he didn't fit into a seat, rather than realizing he needed to lose weight....

What do they mean by stone?

Are you sure it wasn't pies ?
Young and beautiful and thin and gorgeous AND BANNED ! Cya at airspaceonline.com, losers
Top

The Captain looks alittle freaked out there....
Top

Wonder if that Concorde was weight restricted on take off?

I'm wondering how he boarded - you have to go between the galley and the toilet and its quite narrow (I'm what you might call comfortably built, and while I wasn't exactly a Wedged Bear in Great Tightness, a certain angling of the shoulders was required).

Still, good luck to him - GBP300 for a Concorde ticket, can't be bad - better than Hotlines even !
Young and beautiful and thin and gorgeous AND BANNED ! Cya at airspaceonline.com, losers
Top

Punch Drunk Love the movie has a similar story.

The Captain looks alittle freaked out there....

wouldnt you be? This guy gets up for the restroom... and the whole trim shifts!
Faire du ciel le plus bel endroit de la terre c'est impossible sans Concorde!
Top

"Because of my size I feared I wouldn't fit in the seat and I certainly couldn't afford to pay for another one."

Too bad BA didn't adopt Southwest's policy of insisting that passengers who usurp 2 seats must pay for them, they would've raked in extra revenue for it. But good for this guy who realized he had a serious problem and took action, unlike the whining fatsos challenging Southwest who flaunt their hugeness. This is an example of how inspiration can make one rise to the challenge to change their situation, rather than wallow in excuses. Let's hear it for Justin!
Top
Locked