GUANGZHOU, China, August 28, 2006 - China Southern Airlines, (NYSE: ZNH, HKSE:1055, SHA: 600029) - www.cs-air.com/en - with the largest and most technically advanced aircraft fleet in The People's Republic of China is pleased to unveil a chic new collection of Flight Attendant uniforms that would turn heads from the catwalk of any Paris or New York fashion show.

Starting August 28th, China Southern will “send an unmistakable message to the airline world that we have arrived on the global stage … and we are here to stay,” said Mr. He Zong Kai, Vice President, China Southern Airlines.

Mr. He added that, “gone are the old days of Militaristic-style uniforms of one solid color. China Southern has arrived on the International jet set and our new look is a bold statement to say this is who we are in our China Southern Airlines and we are proud of our airline and our people. And we have every right to be. The more than 40,000 staff of China Southern has worked diligently to build our airline company into one of the world’s best … now is the time to strut our stuff!”

More at China Southern Airlines via AdMail
Anyone can fly, only the best Soar.
Top

not too crazy about the scarf, but i like.
Top

I think they look good. Can someone verify what red & blue stand for?

MCOflyer
Never be afraid to stand up for who you are.
Top

drool.... gotta give them a go next time =) I've been brought up on a diet of Singapore and Cathay girls and I have to say this uniform and the flight attendants wearing them don't look too bad at all. Although the homogenous China Southern look is reminiscent of JAL and ANA from a few years back.
Top

A bit Stepford Wife-ish, but better than the polyester blue sacks worn by FAs here in the US.

Besides, those pretty Chinese women would look great in anything.
Atheism is Myth Understood.
Top

Doesn't really do it for me compared to what was on display at China's Fashion Weeks recently. 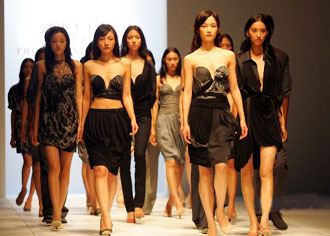 I am not blown away... Maybe I am too used to SQ/MH/GA/TG etc...
Welcome to my starry one world alliance, a team in the sky!
Top

I love it, minus the scarf. The scarf doesn't go. But I love the retro-style head wear. Kind of symbolic for FAs, I wish more airlines had them. China Southern are definitely on the rise. Can't wait for them to join SkyTeam!

Much nicer than the 'ambulance driver' uniforms they wore when I flew with them a year ago.
NZ747
Top

There was nothing wrong with the old one if you ask me:

The new uniform in combination with the trousers looks very strange.
Top

Add another 50 to 100 pounds and add about 20 more years of age and that's what we get here in the states.
Top

Flew them domestically throughout China on a holiday, and they were actually quite enjoyable. Don't know why I remember this

but the skirts are very similar in pattern to their In-flight blankets.
Above and Beyond
Top

Being very frugal perhaps; cutting from the same cloth.

That won't happen in China. There the girls must be very young and beautiful to be given future consideration for the job. China is still very much male dominated, and woman are valued mostly for beauty, not ability. If FAs gain a little weight or start to show a little age and they are out the door. They are paid good money compared to most jobs in China. But their tenure is very short.
Top

Those girls are too young for any other description.
"Who's to say spaceships aren't fine art?" - Phil Lesh
Top

Lee
Sometimes You Can't Make It On Your Own
Top

I find it surprising that there are no F/A uniforms for male F/A's. Does China Southern not have any male F/A's?

The first photo in the opening post shows them off best - you can't see the dodgy 80s skirt fabric...

what's up with those stripes on the skirt?
Top

I think that it looks vile and dated, not retro, not vintage, just old. The hat is disgusting and don't even get me started on that neck scarf! Truly disappointing for a new uniform.

Now Korean Airlines have got the right idea. Their new uniform is so sharp and stylish.
Top

Best laugh I have had all day.
Thanks.
:D
Top

the stripes i think work well with the whole idea...

just imagine 18 of these girls walking together through the arrivals hall, and then theyll stand out...they will then look stylish, sophisticated, and BEAUTIFUL!!!!!


PS: Who has the purple uniform within China?? is it China Eastern?? Whenever im in SHanghai i see them walking through...it looks nice but dated!
Top

Personally, I don't really like the new design, especially the skirts. They've recognised that the old uniform sent out the wrong message of 'old' China, but haven't incorporated much character into the new one. It looks like they've thought about what might be perceived as attractive in the west but haven't left any hint of their heritage in it. In my view, the result is rather plain. CX have done a great job of retaining Asian touches in their stylish red uniforms.
Cathay Pacific, Now you're really flying
Top

My thoughts exactly. It's all a bit blah and mediocre IMHO. The skirts are just wrong, and the jackets are too 80s. Agreed however that it's a step up from the navy pant-suits worn by grumpy american FA's.
Top

u mean this?
MU. nothing really flash but i like the details

CZ's uniform?
nah. it looks like that both CA and MU have better uniforms than CZ. the scarf is just wrong.
i know that both CA and MU tried to introduced a chinese styled uniform aomewhere in the past but neither worked. the issue is that the traditional chinese colour elements are too out standing and bright red and bright gold are not something to be introduced to a confined environment. and traditional women's wear just somehow lacks the look of professionalism
Top
Locked