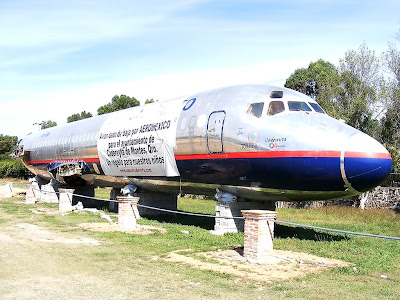 Today it's become an educational tool and donated to the city of Cadereyta, Queretaro, Mexico


What used to be: 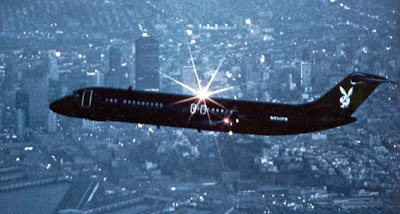 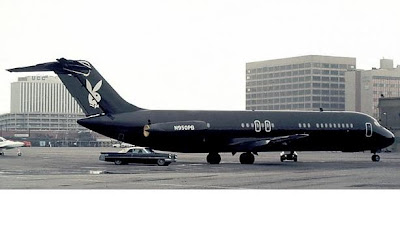 I guess we should be happy that it's still around, having some form of life. It was scheduled to be completly chopped up back in 2008. I wish someone with money, interest and love would bring it back to it's former glory, both inside and out as the Big Bunny.

Wonder if it would actually be possible at all ? Would be the ultimate project !


The aircraft last flew as a regulare passenger aircraft for Aero Mexico in 2004.


Thanx to the webpage below for the info. You can read more about thr aircraft on this page:

Video of the Big Bunny:

I don't get what is sad about it. Playboy is not the misogynistic company the link you posted tries to make it sound like. I am sure Hugh would be happy to know that his former plane is being used to help promote education. Besides from clips I've seen on the shows he and his various girlfriends have done it seems they use chartered BBJ's quite often anyway. And to be perfectly honest Playboy isn't the brand name is used to be.
Top

I used to see this plane at ORD by the Butler Aviation hanger quite a bit. When you saw it coming in on final, even from far out you knew what plane it was. And CO trained the "bunnies" that worked on the plane as F/A's.

Does anyone remember where it was based?

I don' think women today would allow anything like this. They'd probably picket it wherever it turned up.

Not that sad at all really, I'm no fan of Mr Heffner or his company, not really against it either but at least the rest of the frame hasn't been chewed up by a bulldozer and hauled away in several skips to be recycled. A good portion of it survives and is being put to good use.

How much would one pay for half a gutted airliner? I want one in my back garden!!!!!!!!!

Wasn't it also the very first plane to light the tail up with logo lights? I thought I read that somewhere.
Fly HI
Top

The electronically-dimming window shades are quite cool.. I've never seen that before.

No wonder the 787 is the "Dreamliner" with all those rainbow LEDs. Maybe the Bunnyliner one day!
Fly Delta (Wid)Jets


It was an iconic plane for it's time and I would still say it is one of the most iconic private / business jets ever made.Back then not alot of people flew around in private planes as large as this and boasted their image.

Considering that many have strong feelings about preserving older civilian aircraft of various airlines, I'm a bit surprised that people seem to be negative in having a go at this. Would have been a nice adittion in a museum.


I think there are many more interesting or historically significant jets which should be considered before this one. I'm a little lost as to what's special about it....

Then again I'm perhaps a little biased, as speaking from a personal perspective I'd be happy for them to turn every commercial jet thats been saved into beer cans if they could make just one Concorde airworthy...
Top

I saw the DC-9 several times at the old West Imperial Terminal at LAX. back then it was an impressive and rare sight. Anyone know if Playboy contracted with a commercial -9 operator for flight crews and maintenance? I noticed that the captain in the YouTube clip wasn't wearing shoulder epaulets or a traditional uniform shirt. Were these guys freelancers or line pilots flying the Bunny on days off, or maybe full-time Playboy employees?
If it's new and quiet, I don't want to fly it.
Top

I always liked that jet. You don't get to see black aircraft too often - for obvious reasons. But at least now we have the ANZ 77W, A320 and B1900 in the "All Blacks"-livery.

Btw I remember the Bunny Huey from Apocalypse Now:

Does anybody now if something like that ever existed in reality?
Top

I used to live in Saint Louis right across the street from Lambert Field in 1974 and saw the plane out my apartment window all the time. The Bunny Jet was based at STL and was actually owned and operated by Ozark Airlines and was under lease to Playboy.
Top


I think it's because it's Hugh Heffners, or however you spell his name. In America, there's just some things/people that people always faun over. Hugh and Playboy is one of them. People in my classes think he's so great, and I don't see why.

This aircraft was maintained by Purdue Airlines at the Purdue University Airport.
I met my wife on Airliners.Net!!!!
Top

Fan or not, that was a pretty cool video.
Unable.
Top

By all accounts Barbie's efforts at boyfriend modification were only partially successful. In the six-year span from 1970 to 1976 that Playboy owned the aircraft, it made but 191 flights. Nearly all were between the Chicago headquarters of the magazine and Hefner's newly discovered digs on Charring Cross Rd. in the Holmby Hills. As for the Big Bunny, it spent many long days on the tarmac in front of Butler Aviation in O' Hare and at AirResearch on Imperial at LAX, waiting for its owner to fly to those exotic destinations Barbie fantasized about.

The Big Bunny made a couple of transatlantic flights during its service life with Playboy, one to fly the owner to the opening of the London club and casino, and another much-hyped trip to Europe and Africa where Hefner did his best to look the part of a happy and cosmopolitan millionaire tourist on holiday. But after some weeks of hopping from Hilton to Hilton, Hefner concluded in the end, like Dorothy, that there was no place like home.

Reviewing those on-board publicity photos and videos that were taken by the Playboy photographers, one has to admire their amazing talent for creating illusion. The entire scene is almost like the greatest party that never was .
Top


From what I understand, Hef bought the plane primarely for his weekly commute between Chicago and Los Angeles and the taping of his TV series Playboy After Dark. The other destinations were secondary.
Top


I don't know if Purdue maintained it for a time or not, but Ozark did for a number of years at Lambert, but the airplane was not owned and operated by OZ, it was just maintained by them.
Top


Also, the Big Bunny safety card in the link by the OP appears to be an OZ DC-9-30 card with some minor changes.
This plane is built to withstand anything... except a bad pilot.