I wouldn't have thought DEN would have that many trees in the distance, and presumably BN didn't schedule any DC8-62s into DEN, but AAS says a few appeared there 1976-78. If it's not DEN, what's more likely?

If you look at the next half picture in the series, you see a Toyota pickup with a checkerboard flag. Could it be Mexico?
Top

I can't exclude KDEN (Stapleton) looking southeast from the terminal.
The "forest" in the distance could easily be the suburban areas off in that direction.
Top

My guess is somewhere in South America....

I'm going to guess DAL. The background in the picture looks similar to the background of other shots taken at DAL.

Even though BN did not serve DAL on a revenue basis in 1977, their DC-8-62s were still maintained there. After BN's shutdown, the -62s were flown back to the old DAL base for storage.

I think the photo could have been taken when the aircraft was visiting DAL for a maintenance check.
Top

I'm pretty sure this is Stapleton. The hangar opposite should be the one Combs used in the 60's. And the water towers to the left should be Rocky Mountain Arsenal/Fitzsimmons Army Hospital....

That could be DEN (Stapleton).

As noted above, the camera would have been pointed to the southeast, across the east-west runways.

As someone who was based at Stapleton for a long time, I believe this photo is of DEN.
Top

Has anyone read the caption below the picture that says:


I believe that was recently added, possibly after the discussion here. It was not on there when the post first came out.

Dnever Stapleton. The aircraft is taxiing Southeastbound. You can see the water towers at Lowry AFB in the background.
Top


That looks like the truck is flying a Mexican flag. So this is either in Mexico, or someone very proud of his heritage is flying a flag from his truck.
Top


It isn't a Mexican flag. It has too much red in it and the red stripe is facing the wrong way.

It is DEN for sure.... I spent a great deal of time in my youth at DEN and watching planes with my dad land there. We used to like to eat lunch at the 94th Aerosquadron. Those were the days.
Top


YES! You could stand right next to 26L and hear em growl. The North end of the 35s was accessable just outside the arsenal's gate. I have great video from that spot.
Top

I remember the viewing area in the terminal that had theatre type stepped seating!
Top


Mexican ground vehicles are supposed to have a checkerboard flag or one painted on.

I'm gonna confirm that it's Stapleton. Check out the blacktop "stairstep" in this photo. Seven stairsteps total. 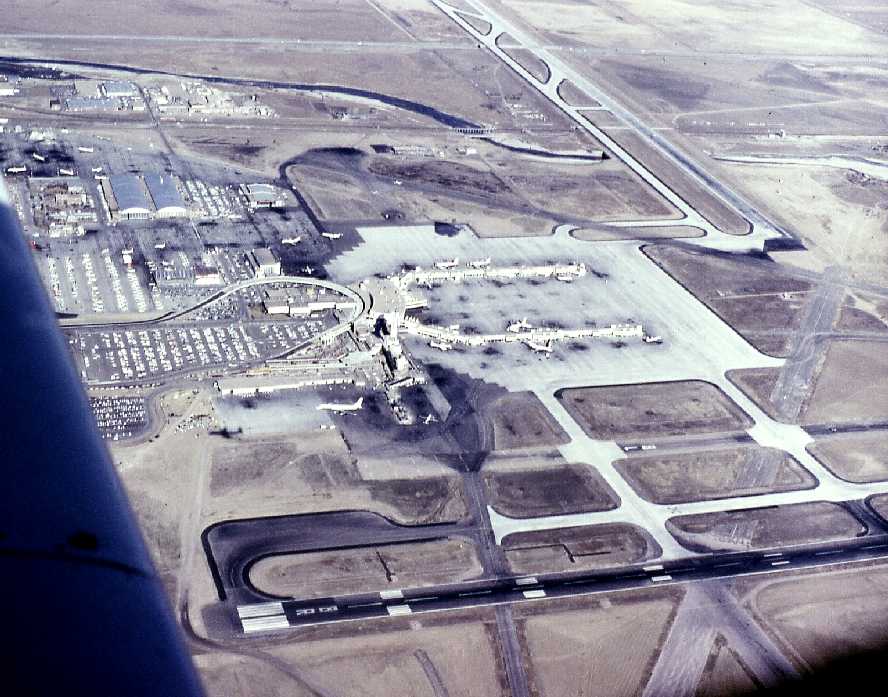 Those things look like the classic Ralston Purina logo.

That topper on that Toyota pickup is kind of odd. It doesn't look like a regular pickup shell.
Top

Just an aside, the pickup isn't a Toyota. It's a Ford Courier/Mazda B-series, most likely the Ford version. I can't remember off hand if that truck was offered in Mexico at that time, but I'm pretty sure it was.
Top


I *loved* that place. Used to beg to go there as a kid. Haven't thought about it in years!!
Top

That picture was taken from inside the B Concourse where BN had a couple of gates and the rest was UA. Lowry AFB was south of the airport. You entered Stapleton on 32nd Avenue, and I think the south boundary was about 25th Avenue. As I remember, the main entrance to Lowry was on 6th Avenue, due south of the airport. Lowry's runways were closed in 1966 after several serious accidents where planes crashed into populated areas. Fitzsimmons Army Hospital was located on Colfax, which is 14th Avenue, southeast of the airport in Aurora Notice the reflection of the glass in the photo from the windows. When I was in college at CU, BN used to have one DC-8-62 flight per day to DAL that departed around 2:00 pm. I took it once. The rest of their flights to DAL were either 720-027's or 727's at that time. They also operated DC-8-51's into DEN in 77-79 period when they grabbed all of the dormant routes and needed aircraft and picked up four or six -51's.
Top

You're right it is. It is the 71-76 model. The bed threw me, because Toyota had a bed like that too. When I think of a Ford Courier I think of the later 70s version. I remember I once worked on a JATCO transmission from one, but the tranny was no longer in a truck, but part of a childrens train ride.
Top


It was certainly there in 1981 when I went for the first time!
Top


Definitely Stapleton...and if you look just to the left of the rudder, you can actually see the Fitzsimmons Army Hospital (which is now part of the University of Colorado school of medicine complex).


I lived there up until about 1982, and it was open until at least then...my brother and I used to beg our father to take us there every Saturday, and it seemed like we did!


We were probably there at the same time! If I remember correctly, the restaurant was decorated/designed like a WWI-era command bunker or something, and there was also a replica of the famous Red Baron (a.k.a. "Snoopy" from the Peanuts cartoons) on his trusty tri-plane (his dog house!) out front as well. I distinctly remember that the tables by the windows facing the runways had headsets you could put on and listen to the ATC communication between the tower and the arriving aircraft. I'll never forget standing out in back of the restaurant next to the fence after dinner and seeing two streams of lights of aircraft on approach to runways 26L/26R...sometimes there were five or six aircraft lined up for each runway. Wish I could go back and live those days again!
Top


That was the place.... I remember they had sand bags stacked all over the place.


That was so cool, when I was a kid. It still would be.
Top


Too bad it doesn't exist anymore...it burned down before Stapleton closed. In April of 1993 I was visiting the area so I drove to the south side of Stapleton hoping to have dinner there one last time. I circled around the neighborhood several times but I couldn't find it. After about 15 minutes a Denver police officer pulled me over and asked me what I was doing in the area. I explained to him that I was looking for the restaurant and with a slight sigh, he pointed to the empty lot across the street from where I was stopped and said, "it used to be right there!". Since Stapleton was going to close soon anyway, there was no point in rebuilding it I suppose. Someone floated the "conspiracy theory" at the time that perhaps the owners burned down the restaurant, making it look like an accident of course, to get the insurance money instead of what would have inevitably been a slow death once Stapleton closed and DIA opened...who knows how long the restaurant would have bene able to stay open without the attraction of the adjacent airport.

On a side note, I once thought that had the 94th Aerosquadron restaurant been rebuilt near DIA, a good place for it would have been on top of the "hill" on the western end along the rental car access road that parallels runways 7-25. Thoughts?
Top


It was. According to my logbooks I overnighted at Stapleton 22 and departed 23 November 1986.
I liked it better than the new airport in just about every way.
Top
Post Reply