For the first time a Boeing 737 lands at the Norwegian Troll research station in Antarctica.

In late November, a Boeing 737 landed for the first time at the Norwegian research station Troll in Dronning Maud Land, Antarctica.

So far the Hercules C-130 transport aircraft has been used to transport people and supplies to and from the research station.

Boeing 737 aircraft were tested to try out a more modern, secure and environmentally friendly alternative, says director of operations and logistics, Øystein Mikel Borg at the Norwegian Polar Institute.

- Boeing 737 aircraft with more modern equipment that improves safety, but also reduce our footprint in Antarctica because it reduces the need to transport fuel to the Troll.

Now the Norwegian Polar Institute will evaluate the flight.


Check out the pictures in the articles:


Troll is a research station located at Jutulsessen, 235 kilometers (146 mi) from the coast in the eastern part of Princess Martha Coast in Queen Maud Land, Antarctica. It is Norway's only all-year research station in Antarctica, and is supplemented by the summer-only station Tor. Troll is operated by the Norwegian Polar Institute and also features facilities for the Norwegian Meteorological Institute, the Norwegian Institute for Air Research and Troll Satellite Station operated by Kongsberg Satellite Services.

Very cool (pun intended). Believe the Kiwi's have been running an A319 to their "airport" in Antarctica for a couple of years. Must be special landing a commercial airliner, with relatively little in the way of modifications, on the ice. In Antarctica to boot. Lucky guys

PS
And here she is (gurgle was my friend): Signature. You just read one.
Top

Privatair looking to expand thier business? Maybe charter flights one stop from US or europe to Antarctica.

Which C-130 have they been using so far? Norwegian Air Force? If so that would also free up some transport capacity in Norway.

How long of a flight would it have been from CPT to the research station at Troll?
Top

Very cool to see commercial aircraft operating in such an environment (though my inner tree-hugger says we should leave the whole continent untouched).

How do they manage to de-ice aircraft in such environments? Do they have the infrastructure there to de-ice, or do they have to bring specialist equipment with them on each flight?


It is probably so cold and dry that they don't need to. I doubt they would fly in bad weather.
Why do Aerospace Engineering students have to turn things in on time?
Top


Wow it seems strange seeing it out there but it looks great anyway, also has the perfect livery too haha.
3 words... I Love Aviation!!!
Top


Yes, if you read artcile number 2 ( In Norwegian ) you can see picture of a Norwegian C-130 of the Royal Norwegian Airforce


Not sure about this. But it is the personell at the Troll who manages the operations at the airport ( Snowplowing, luggagehandling, fire and rescue etc )


The airport is not open for commercial or other private flights.

You can read more about the airfield here: 
Actually it's Australia who run the A319 down there, out of Hobart - NZ runs several NZ air force C-130 flights from Chch, along with the other deep freeze flights into McMurdo station. A few NZ air force B-757 flights have occurred also, but not sure if they're going to become regular.

Why to paint it white and not in another distinguishable color?
JDM's
Top

Awesome that they are able to do this!


As per the wikipedia article, it take up to 5.5 hours in the Hecules, so it probably isn't much different in a 737. I don't know the speed differences between the Il-76 and the 737, though.

Wow thanks for sharing, very cool!


Dry and cold, probably no need. Up here we mostly de-ice in late fall/early spring, and once winter has fully set in there's often no need. Also it might be too cold to de-ice even if they wanted to, my de-ice training isn't up to date but -32c sticks in my head as the cutoff for spraying de-ice fluid, so below that the only way to de-ice is the old ladder and a broom anyway.


Probably just happened to be the colour of the aircraft that was available. Though I do agree with the idea that more colour would be better for safety, easier to spot if it goes down. That and I hate plain white aircraft no matter what the backround, everything (airplanes, trucks, houses) looks better with some colour and variety to it.
HS-748, like a 747 but better!
Top


The US Navy used to paint their DC-3s in a black and orange paint scheme for use up north for precisely that reason. The planes looked hideous though.
Why do Aerospace Engineering students have to turn things in on time?
Top

Do we know who the owner/operator of the 737 is?
Top


If I'm reading the registration correctly from the photo, I believe it could be HB-IIQ, which is a 737-700 owned by PrivatAir.
Boeing 777 fanboy
Top

I say they should sell tickets on it, not for anyone to get off the plane there but for people who want to see it out the window and say they have been on all continents!

I would buy a ticket!

It would also help subsidize the costs!


They've been doing it in the Canadian Arctic region for decades. Example below of a Pacific Western 737-200C combi operating a charter to an oil drilling site on the sea ice in March 1986. Temperature at the time -46C. 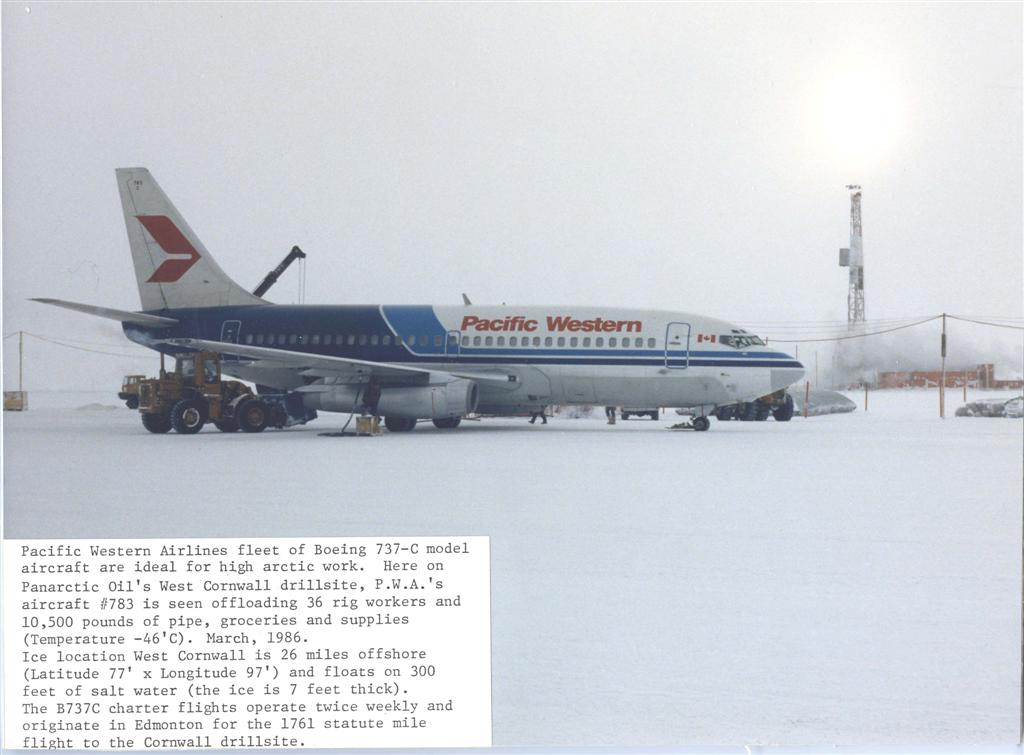 That gravel kit-equipped 732 combi is still hard at work at age 31, now with Canadian North. 
Lol ... exactly how many flights do they have to this location? The population could all comfortably fit on a single B737 I believe!

Normally, I do not like white planes. But, here I think the photo of the white 737 with just a square of red on the tail is quite stylish looking amid all the white of the landscape. The plane with its winglets looks clean and bright.
Top


On the 737 it consisted of a deflector plate behind the nose wheel and a device that protruded out in front of each engine through which bleed air was blown downwards to keep gravel out of the engines. I think that some 727s were also fitted out for gravel runways, but of course only had the gravel deflector since the engines were up out of the way already.
Why do Aerospace Engineering students have to turn things in on time?
Top


Oh, good old PW in PW colours before all the 'modern' mess-up of the industry. Woe for CP, woe for PW, woe for WD...

Here's a gravel deflector closer up...
On a Canadian North aircraft: And even closer, on an Iranian government B737