Just read this extraordinary article about a Glasgow bound A320 having a near miss with a UFO.
Anyone care to shed some light on this?

Odd that they say it was "bigger than a balloon". That's like saying it was longer than a piece of string. I'd say a balloon would be the most likely explanation.
Top

What's a "near miss"? Does that mean it hit the UFO, but almost missed it?


They actually had a "near hit". Indeed, a collision is a "near miss" :P
Quantos,


"although the radar at Prestwick did spot an "unidentified track history" 1.3 nautical miles east of the A320's position 28 seconds earlier."

Which surely should have been relayed to the A320, no?
Top


I don't understand why someone has to bring this up every single time. It was a miss and it came very near to the object it missed. Seems clear enough to most people.
Top

If you nearly miss something, you hit it. I have to call my insurance company when I nearly miss another vehicle while driving.
Always looking for the longest route with the most transfers.
Top

Erm, just to clarify, a 'near miss' DOES NOT mean you hit it! Near miss means you missed the object but were very close to hitting it. Maybe it is just an English saying?
Every Achievement Starts with a Decision to Try

What is an A320 doing at 4,000ft some 20km East of GLA? Isn't that a little low that soon, there must still have been around 30km left to run before landing.


It's not. This joke was made very popular by the (American) comedian George Carlin. Yes, it's a slightly odd way of saying it, but the meaning is clear. People just like to feel witty when they point out the oddity of it.
Top


It's one of those subtleties of the English language were two separate words put together take on the opposite meaning of the individual words.

To be fair, one of the definitions of the words 'near miss' is for ordinance (missiles/artillery) that land far enough from their target to be considered a miss, but near enough to still contribute damage to the target.

The English language... you have to love it.
Always looking for the longest route with the most transfers.
Top


Here is Carlin setting the precedent:


Ah, but alas, "nearly" and "near" are different words despite the same root. "Nearly" is used as an adverb used to clarify the verb "miss" when you "nearly miss" something, whereas "near" is an adjective that describes the noun "miss" when you have a "near miss."
Top

This is a strange story. Most of the UFO sightings you read about are from unreliable sources.

But two airline pilots, I can believe that they saw something.

This is an aviation forum with members from all over the world with many speaking English as a second language.

Near miss? Near hit? It doesn't matter. Was there little green men inside the UFO?
Top


And considering the term has been used in the aviation field for decades to denote two aircraft coming in close proximity with colliding, and this is, after all, an aviation web site, you would think people would understand the meaning...

Quite large, blue & yellow? MOLs ego might have managed to take flight of its own accord...


Oh, they understand, some people just want to be a smart aleck. But it's the people who constantly feel the need to bring this up that end up on the wrong end of things. "Near miss" does not mean "nearly missed" - it means a miss that was near. They're confusing an adjective with an adverb.

"Near hit" (the proposed alternative) would be redundant and incorrect. A "near hit" would be a hit that happened near to the object being hit - that's nonsensical. And "near hit" as opposed to what, anyway? A far hit? That's impossible.

If you add a dash to these terms ("near-miss"), then you could argue that it means something else, but *that* actually becomes a little confusing and would require explanation each time.
I'm tired of being a wanna-be league bowler. I wanna be a league bowler!
Top


Darn Canadians - you always have to be so technical and precise!

Yes, it's an oxymoron. It is a quirk of the English language and it does not make any sense, or at least any more sense than "pretty ugly" or "feeling numb"...but the generally accepted usage of a "near miss" is to describe an event that almost results in a collision but does not actually result in a collision. Let's move beyond English-language nuances and talk about the near collision with the UFO, please.
None shall pass!!!!
Top


This is the direct distance, if you are over that position you still have a minimum of 30km left to run, more realistically around 40km/20nm, before you arrive at GLA. Perhaps it isn't, but it seems a little low to me - I don't recall being much below around 6,000ft at that point when I've flown into GLA on that runway.

Wow you people surely know how to turn a thread upside down. Knock off the stupid technicalities and get back on topic. 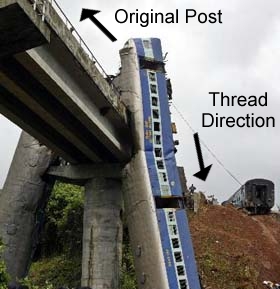 
Priceless! Not even a MC would get that..


I don't pass info on every ghost trail to pilots. I'd be more busy giving traffic information about a truck on a highway or a ship, or high-level traffic breaking through the target filter due to erratic mode C reporting than I would be separating or vectoring my traffic.

If it's obvious that its an aircraft that could possibly be in my sector and it has no transponder for altitude verification (often VFR's fly low level with no transponder turned on), I will give essential traffic info. But often due to the low level nature the targets are often intermittent etc If its a constant return then i know its not low level and caution should be taken. But traffic loading always plays a factor too...

EDIT:
And further to your quotation is this from the BBC article "The controller stated that he was not talking to anyone else in that area and that nothing was seen on radar.

Search action was taken with no result and the A320 pilot stated his intention to file a report to Airprox, which investigates near misses.

Air traffic control said they had no trace of any other objects in the area at the time of the incident, although the radar at Prestwick did spot an "unidentified track history" 1.3 nautical miles east of the A320's position 28 seconds earlier."

Bold/underline mine. The radar processor might not have actually presented the information to the ATC if the targets were too weak... RDP's and Track processors are complicated things. It might have been a subsequent look at raw radar data...

I know what happened:

The A320 occasionally met the top secret Boeing 737 successor Prototype plane 'Next Gen Narrow Body'.
:D
Due to a temporary error in the stealth mode function, the A320 crew had a sneak preview of this top secret development.
It is obviously so secret that even Stich didn't get in the info loop yet.

Guess Airbus is quite nervous now.

LOL, wow..... I never thought about it but a near miss doesnt make sense at all.

If you nearly missed something, it means you almost missed it... which means you probably hit it.

It should be near collision or even close call....

Anyway.... lol.... Good that the plane DID NOT hit whatever it was that was buzzing around.....
Top

I'd like to see the pilots draw what they saw, that would give us a good explanation. Was there any some sort of footage? There are some airports that film the planes as they descend, mostly from the tower from what I can see.

The "as large as a balloon" bit really doesn't help give us an idea of what it is. We'll know more as time goes by....
Flying is my life. It's as if it were in my blood.
Top

It was Marvin hot rodding in his little saucer again. He likes to buzz planes for some reason. We've tried to talk with him, but he just telepathically takes control of us to let us know he's in charge...


Lightsaber
IM messages to mods on warnings and bans will be ignored and nasty ones will result in a ban.
Top

What I am wondering is if the UFO is required to fill a near-miss report?
After all, the A320 was recklessly crossing their fly-path.
Not surprised from people who wash their engines with volcanic ashes or put ice cubes in their tanks


The pilots were most likely using the more literal meaning of "UFO". When most people hear UFO they imagine flying saucers from outer space with little green men inside. But it really just means "unidentified flying object." They say an object, it was flying, and they couldn't identify what it was, therefore they saw an unidentified flying object. I don't know if UFO is a standard term pilots use when they see something like that, but maybe an actual pilot could shed some light on that.
Top

The UFO was probably a IFS (Identified Flying Shark).


This is the most likely explanation.
This must be one of the most unusual aviation events ever, a plane almost colliding with a shark!!
Top


Those were for sale a year ago at a local toy store. But there were quite bit more expensive than 15 quid... Little Billy has a bit of explaining to do.

Lightsaber
IM messages to mods on warnings and bans will be ignored and nasty ones will result in a ban.
Top
Post Reply