After few delays the groundbreaking is taking place right now.
Name still to be decided, PM suggests 1st phase will be completed October 2017 with a capacity of 70-90 mil pax annually.
There are plans for it to grow up to 150million pax annually with total 6 runways in 4 stages;
This is a very ambitious project which eventually cost the LIMAK consortium over 22Billion Euros rent for 25 years.
It is being built in tandem with a 3rd bridge over the Bosphorus straits, new highways, rail system in the Northern part of the city which I am afraid will get rid of the last piece of untouched green areas of Istanbul.

It is helpful to revisit earlier threads on this issue:
NY Times: New Istanbul Airport In Jeopardy? (by yeogeo Jan 31 2014 in Civil Aviation)
Top


That would be sad. A civilization should be aware of the importance to protect such areas in their own interest.
Dedicated to the MD-80, MD-90, MD-95, and DC-9: www.MD-80.com
Top

Here is an aerial view of the site today;
https://www.youtube.com/watch?v=57UKRtLCS6I
Top

I was in Istanbul a few weeks ago and was impressed by the immense speed the 3rd bridge is coming along. Already the pilings are complete both on land in the sea, with work commencing on the bridge truss.

In addition I observed some of the preparatory road works including tunneling which will connect the future airport area with European side of Istanbul.

Oct 2017 is indeed extremly ambitious! They work very fast in Turkey, but so fast? The opening is just a few months after the new Midfield Terminal in AUH which is set to open in July 2017 (and that is "just" a terminal, not a whole new airport!).
Top


Why the perpendicular runway? If they are planning to build 5 parallel runways I can't imagine that there will ever be a need to use the single "cross wind" runway.


It's a lot easier and faster to build from a clean sheet than it is to build within the perimeter of a fully functional airport, and especially one that is open 24x7.
Top


It will be a fantastic airport for sure. And might threaten the positions of Dubai, Abu Dhabi and Qatar.


This is a hell of a lot of money, but Istanbul does deserve this airport — IST can't handle all of this traffic anymore!

Airport will have 88 passenger contact gates with 165 jetway bridges plus apron capacity for another 200+ aircraft.
From the desert to the sea, to all of Southern California
Top


this is only the first phase of the project that is projected to be finished in less than 4 years. This fact alone is worth a thread IMHO.


Don't worry! Aviation is growing at more than 20% in Turkey each year. So in your case, staying away from Turkey for what ever ridiculous reason you might have will not really hurt the figures!
Top

That is an average of about 13% growth average. Impressive, but a far cry from the lies of 20%

I suspect 2014 won't be breaking any records.
Top

88 jetway gates is plenty to start with -- to put things in perspective - IST today has 26 international jetway stands plus 12 domestic ones.

Anyhow by phase 4, the plans call for upwards of 500 parking positions between the terminals and apron positions.

Istanbul Ataturk is already the 3rd busiest airport in Europe having just past Frankfurt and Amsterdam in enplanements.


Should also remember there is a lot more to Turkish aviation growth than just IST airport.

The country has 50+ commercial airports that registered some 150 million odd annual enplanements and has become one the worlds largest aviation markets.

When one considers the Istanbul market with its 2 airports already today register traffic of 70mil passengers, designing something to open with 90 million capacity is not that ambitious after all.

Plus besides all the huge organic domestic demand growth, Turkey has also become the 6th largest tourist market globally, passing markets like the UK, Germany and soon getting close to 5th place Italy.

This is overdue. Replacing IST with its two crossing runways with an initial 3 runways will be a dramatic step up.


There will be many threads on this airport.

You're neglecting the geometric progression. You're also neglecting that most mature airports grow 5% to 7% in Western nations. So even if the average is only say 11%, that will be a growth rate twice (or more) of the European competition.

Adding over 20 million pax in 4 years is impressive.

Without the congestion of the current IST, growth has potential for even faster growth.

What amazes me is that the #3 airport in Europe is at #17. Now some of that is due to the incredible growth of KUL, PVG, and other Asian airports pushing their way into the top 20. An airport that will have impressive growth if they can add runways & terminals at CGK. That is one of the few airports that might significant outgrow IST.

And what are the plans for IST and SAW after this airport opens??
Top


Still, a 13% annually growth means the airport is growing at a similar rate as Emirates does.


-SAW is not going anywhere, adding a second runway. Istanbul is a very large city. From some parts of the Asian parts of the city it might be easier to fly to Frankfurt than driving to the new airport, using SAW. SAW will find itself in the top 15-20 (if not higher) list of Europe's busiest in a few years.
-IST on the other hand supposedly will be a more private jets airport and exhibitions and such. But knowing the current government that has based Turkish economy's 20% on construction, it will eventually be built up with housing and malls.
Top


2014 projection is 60M pax, so that is adding 30M pax in 5 years. And all this is achieved by a smaller fleet in 5 years going from less than 150 to just about 250 frames.
Now, imagine TK when it receives the already ordered 245 frames in the next 7 years.
Top

Oh look another discussion on whether this airport will be viable or not. How refreshing.


Not contact gates you can't. Go ahead and try.
But as others pointed out, even though this is only the first phase it will still be 3x more than what the current IST has to offer in number of gates, terminal area, and runway capacity.


They can't because they are operating at max capacity already, hence why the new airport is needed. I wouldn't be surprised to see YoY growth, shrink until the new airport opens. Even a 5-10% growth at the current IST airport will be a huge achievement considering how full it is.
Top


This was announced last week, a 100M Euro terminal addition to the current IST till the new airport opens, an additional 10Mpax capacity:
http://news.airwise.com/story/view/1401799531.html
Top

"You can't be a real country unless you have a beer and an airline." Frank Zappa
Top


100% growth in 5 years in incredibly impressive.


There's nothing concrete about that. It merely states that the airport operator "is in talks" with the airport authority. No dates yet or confirmation that it will happen. There's also no forward movement on building the 4th runway. With the new airport opening in 2017 (only 3 years away), I doubt very much that there will be any financial motivation to expand the current airport.
Top 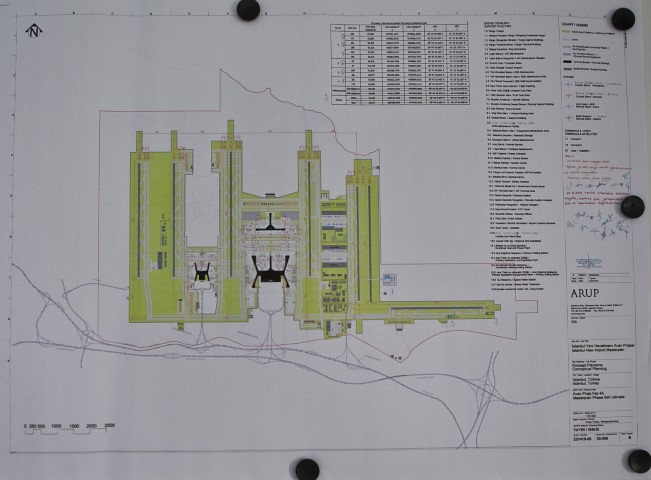 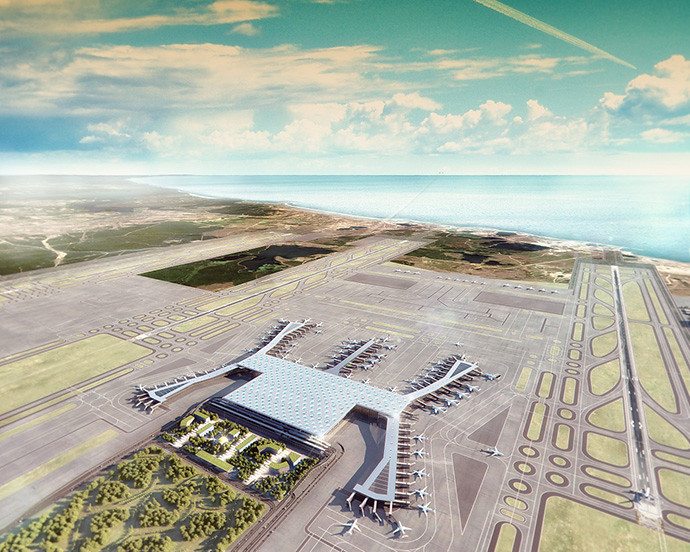 
Is it me or are those gates not spaced to scale? They seem way too close together.
Top

Today was again an interview with the Director of Turkish CAA, stating that the current Cargo Teminal will be demolisched once the new one is operational.
Immediately the existing terminal will be extendet to meet the demand.

I guess TAV can build it within a year as they did with the first expansion.
to remember, the existing terminal first stage was build in 22 month.
Top

TAV (the operator of IST) in 2008 decided to expanded the terminal by 6 gate positions. Project took less than 14 months from contract signing to facility opening.
With closure of the old cargo facilities, I can see similar quick project which could be operational by late 2015.
From the desert to the sea, to all of Southern California
Top

Where will the fabulous spotting locations be located at the new airport?

Ambitious project, but I think they can pull it off.


There's a huge difference between building a mere 6 gate addition to an existing terminal, vs. building a brand new International terminal with capacity for 10 million passengers. For example, BOS just built a new 10 gate addition to terminal B, for UA, in a little over 1 year.
Unless the term "International terminal" is being used very loosely here, and what they really mean to say is a satellite terminal similar to ZRH, I don't see it happening that quickly.

I think there is confusion.
According to French media reports (remember Aéroports de Paris owns portion of TAV), there is no concept for a new terminal at IST being built.
What TAV is speaking about is "enlargement" of international terminal towards where the soon to be vacated cargo ramp is located.
Basically repeat of what was done in previous years.

Lets visualize this a little. Cargo terminal in red

Yes the idea is to expand the current and only international terminal, not build a new facility from scratch.

For fun, the last time a new terminal was considered at Ataturk it was around 2010-2011. Here was the proposal.

Basically doubling up on the international terminal would help landside, but things would still be strained airside with runway capacity.

From the desert to the sea, to all of Southern California
Top


Thanks for the clarification. That makes more sense.
That's exactly the same thing they did at LIS. I think it took them about 2 years.
Top
Post Reply