Qatar Airways A380 In Qatar!

Qatar Airways A380 In Qatar!

Media invites are being sent out right now to attend the arrival in Qatar of the first A380 "the newest aircraft in its fleet" on the afternoon/evening of Thursday September 18th, at Hamad Int'l Airport.
After the arrival and the reveal, the lucky ones will get to have a tour of the aircraft.
Top

The frame is OK now ?


Yes, and apparently another QR acceptance team approved the cabin changes. The aircraft made two acceptance flights on September 9 and seems to be ready for delivery next week. 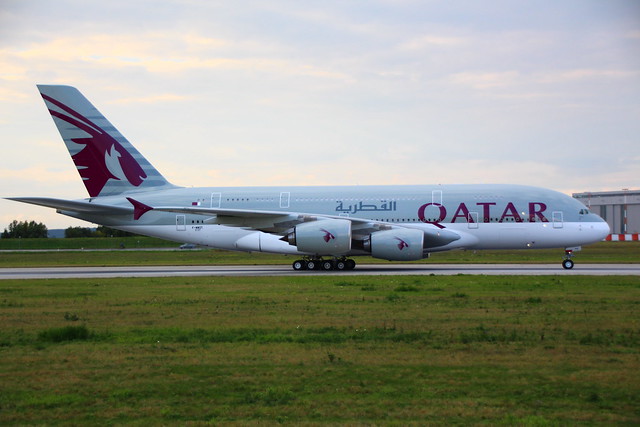 A380 Qatar A7-APA by XFW-Spotter, on Flickr
What we leave behind is not as important as how we've lived.
Top

AAB happy with the carpets now is he ?


Apparently yes, as per this -
https://uk.finance.yahoo.com/news/airbus-spokesman-says-plan-fly-153548400.html


So fortunately that issue has been resolved now. The A380 in QR's livery look very, very good imho.

But for those of us who don't know, what caused the delay?
Top


Source
http://tinyurl.com/opkp8kg
What we leave behind is not as important as how we've lived.
Top


Number 1, 2 and 3 should be delivered this year. Number 1 will open LHR service in October while number 2 will open CDG service in November. Number 3 will enable daily rotations.
What we leave behind is not as important as how we've lived.
Top


Many thanks KarelXWB, can not wait to see A380 also in service with EY & watch how ME3's will battle it out each with their own A380!


Yes, the shagginess/thickness ratio is now within .001% of tolerance.
I'll do my own airline. With Blackjack. And hookers. In fact, forget the airline.
Top

i would love to know if the reasons cited above are the real reasons why the a/c was not accepted...if i can refuse delivery of an a/c for so long i probably don't need it...let's see what will happen with the a350...airbus will probably be prepared this time

On other news, QR delayed CDG to 1 November.

*That is a big shock*

Certainly the best looking A380,IMHO .
"Suspicion is a matter of opinion"
Top


Wow,
I wonder if Airbus locked the doors after the last flight and told everyone not to even look at it

Good news.
Where ever you go, there you are.
Top


Paris service will start with the arrival of the second airframe.
What we leave behind is not as important as how we've lived.
Top


Do you think there will be other shorter duration destinations being placed in between the two airframes?
لا اله الا الله محمد رسول الله
Top

Qatar Airways now officially confirmed the arrival of the A380. 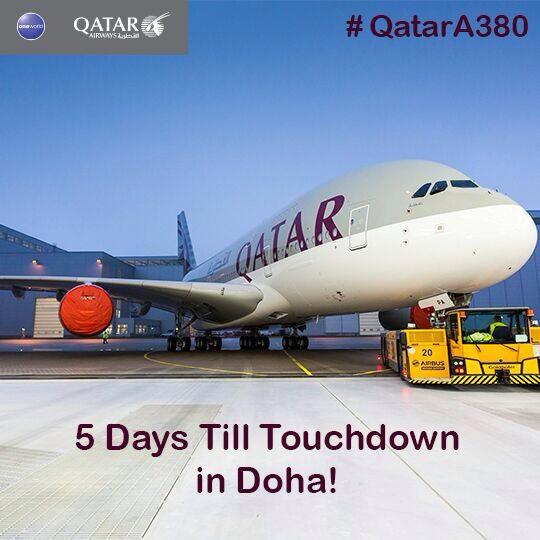 In my mind, this is the best looking A380 out there.

F-WWST by air-spotter.net, on Flickr
Aviation is proof that given, the will, we have the capacity to achieve the impossible. - Eddie Rickenbacker
Top

Looking forward to giving a try in November. I am wondering what (if any) enhancements there is in the J cabin not in the 787 cabin?
Top 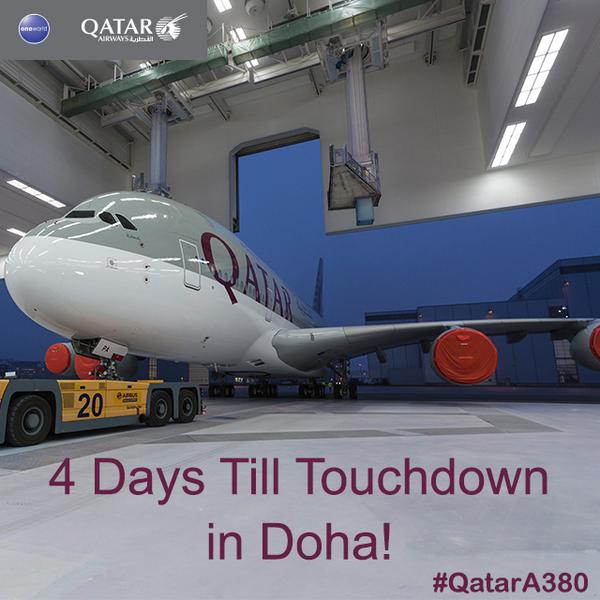 The jet was pulled to the XFW delivery center today. 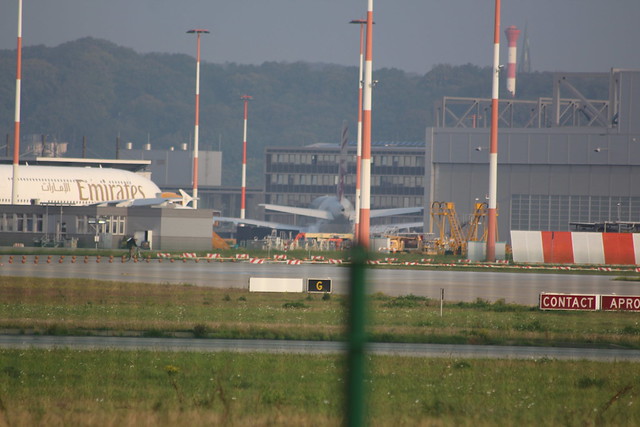 A380 Qatar A7-APA by XFW-Spotter, on Flickr
What we leave behind is not as important as how we've lived.
Top


They have to be one of the most worked areas of the aircraft, spot a problem before delivery is better than taking out a year later to fix.
you don't get a second chance to make a first impression!
Growing older, but not up.
Top

Someone else is blaming Zodiac Aerospace for the delay:

Anyway, it doesn't matter anymore. Airbus addressed the cabin issues and Qatar Airways accepted the airframe afterwards.
What we leave behind is not as important as how we've lived.
Top 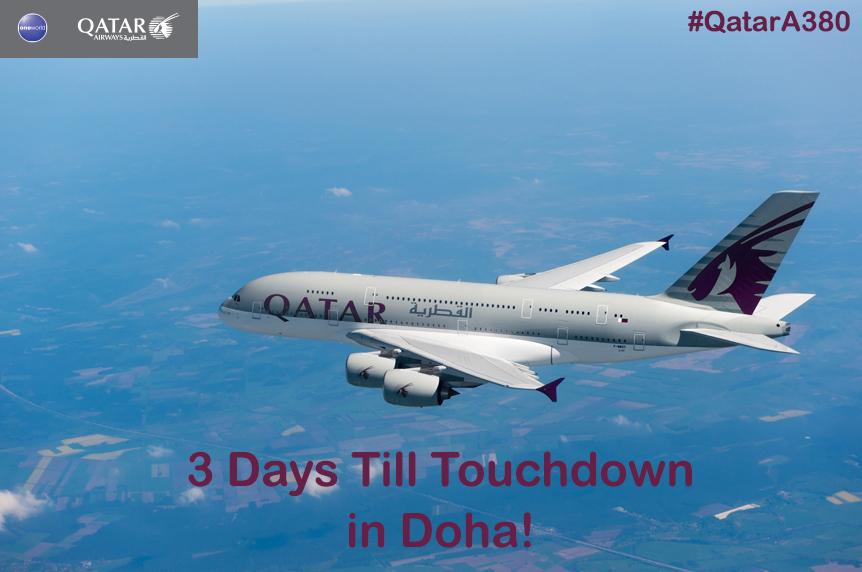 Somehow, this countdown promo feels like the countdown to #TheHungergames #MockingjayPart1 trailer.

Super excited and can't wait to be on the upper deck of #QatarA380 LHR-DOH late October.
Let's just blame it on yields.
Top 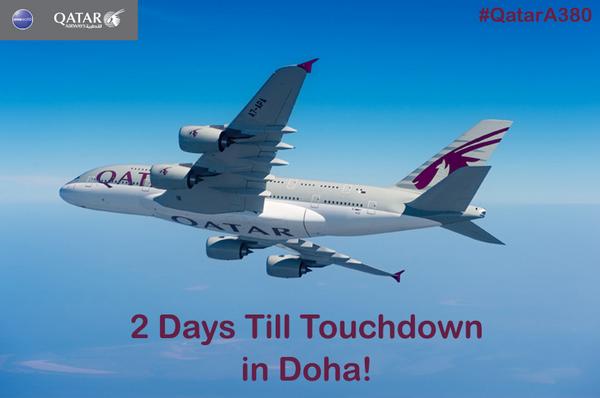 
That would be me

Well, the cabin is almost exactly the same, perhaps wider aisles as the A380 is wider than the 787. The lounge access for J passengers is a big bonus as well.
لا اله الا الله محمد رسول الله
Top

Qatar Airways executives just arrived in Hamburg with a Global 5000 jet (A7-CEV) for a big celebration party today.
What we leave behind is not as important as how we've lived.
Top


So it is finally going to happen.

The QR livery really is one of the best looking liveries on the A380 so far.

How many A380's are they picking up tomorrow?

I thought they had 3 or 4 ready to deliver?
Top

Video of the painting:
http://www.youtube.com/watch?v=nOARY...ASfo&list=UUi8xUU_lg3zr8UcBXLdEheQ
Top


Supposedly one; but from I was told by an insider, there will be double surprise! (I do not know, but I am thinking it might be more than one)

They are supposed to have 4 by the end of this year. In addition, to two A350s, and a few 777's--a great capacity increase. Perhaps, we should be hearing about new destinations/upgrades shortly.
لا اله الا الله محمد رسول الله
Top


There are two QR A380s parked in front of the XFW delivery center. However, I do not know if that means a double delivery (AFAIK the 2nd A380 has yet to make its acceptance flight).


Maybe they are going to order more of them, for an airline the size of QR and with the expansion plans and ego, I think they need more of them, I don´t know where will they fly them, but slowly we can see more and more in the network.


Actually I was talking today with one of my friends in QR and he told me that they are having issues because the lack of A320 planes, they are short, so maybe we will see upgrades in long flights, like we have seen with RGN, maybe we can see NBO, MXP, WAW or DAR going to A330 or B788.
Top


Photo of the arrival:

http://www.netairspace.com/photos/aviation/photo_56286/
What we leave behind is not as important as how we've lived.
Top

From the ceremony in Hamburg.


I can see that happening. Although, I don't understand why QR would end 3 A321 leases with CIT and give them off to UL, if they were starved of narrow-body aircraft.

BTW, that A380 is just frickking beautiful!

Just read article on the QR A380 delivery in Flight Global and AAB said QR hope to firm up the 3 remaining options plus hinted at a top-up order too.....if the aircraft exceeds their expectations.
No pressure then.........
Top

Cabin photos have been released: 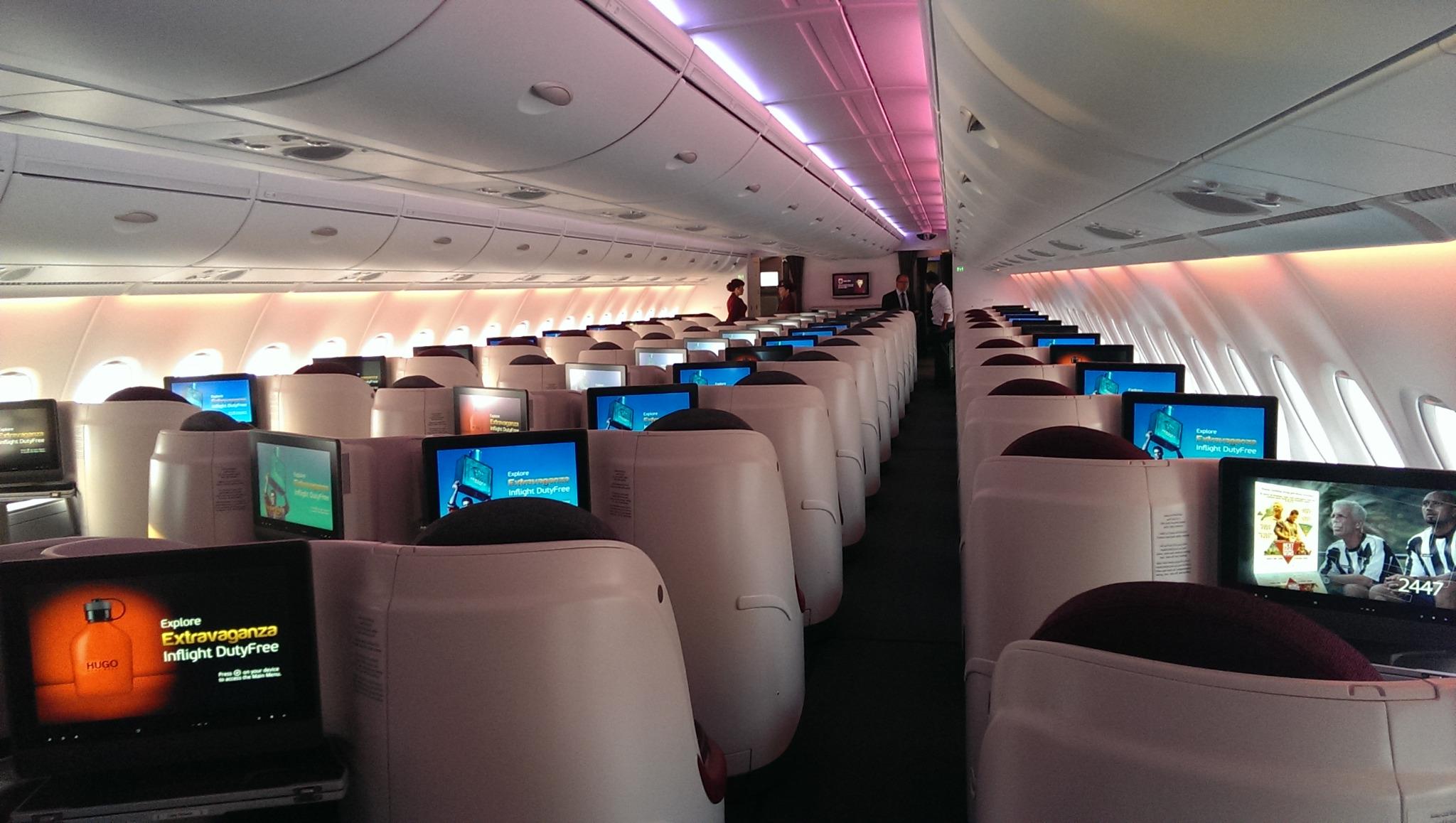 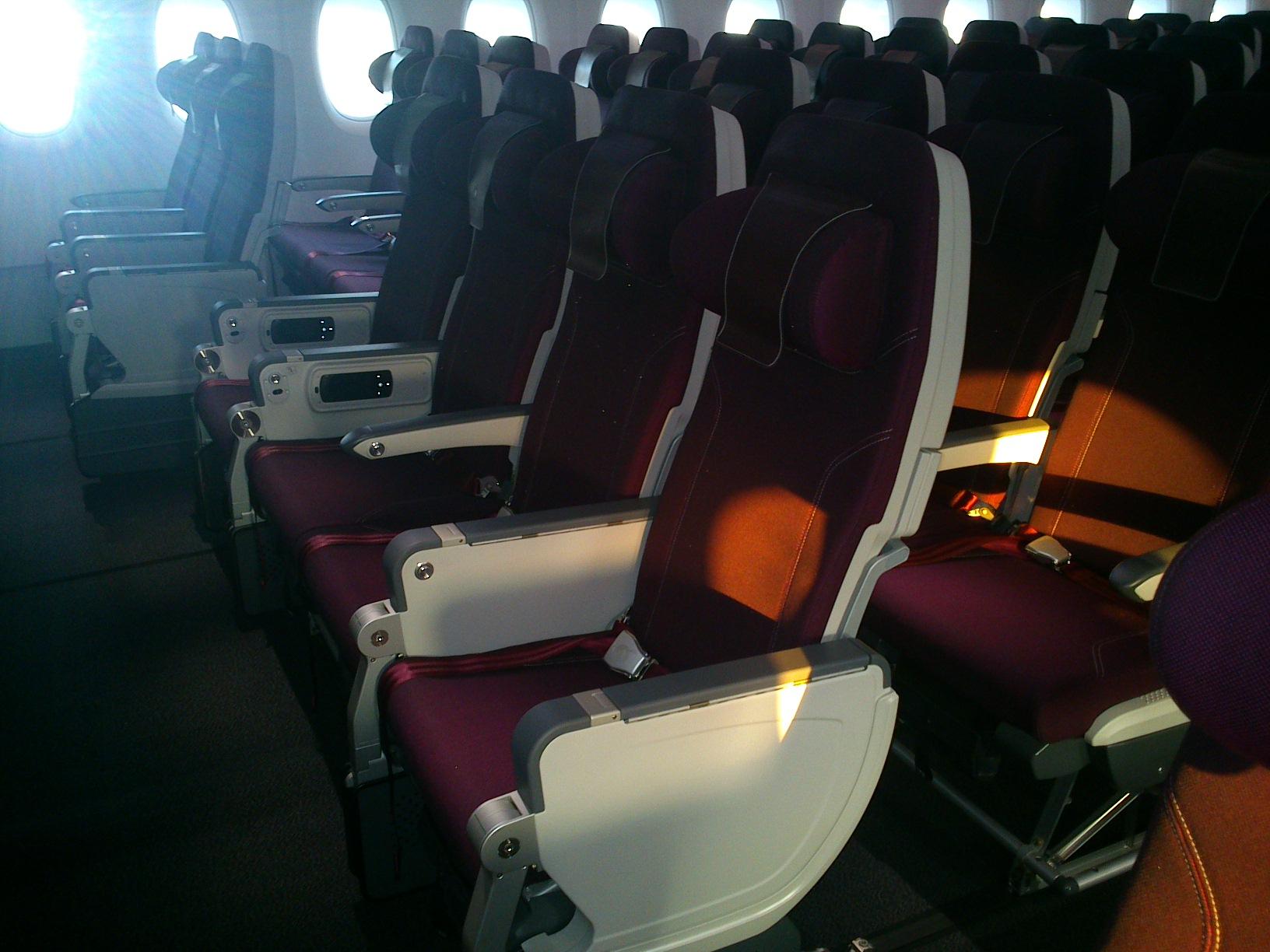 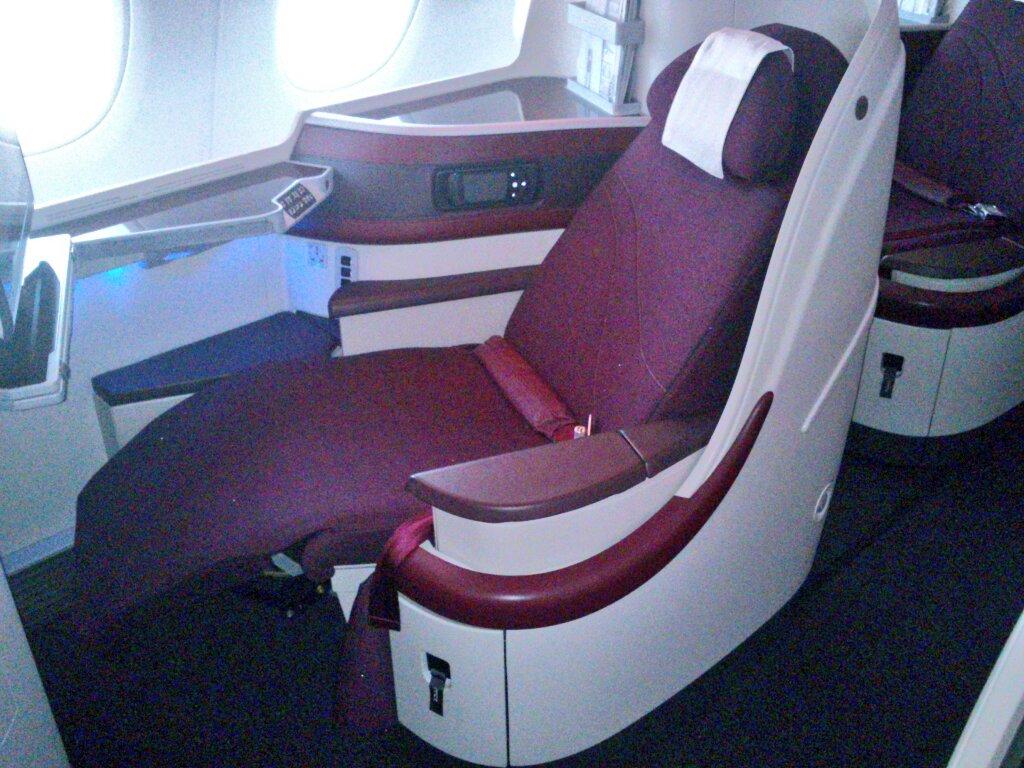 1) http://www.ausbt.com.au/photos-qatar...s-airbus-a380-first-business-class
2) http://twitter.com/flynewsmagazine
What we leave behind is not as important as how we've lived.
Top

Here is the link. Quotes:
"Once delivered, we will see its performance and, if it exceeds our expectations, we will firm up the three airplanes and maybe take some more," he said at a press conference ahead of the delivery ceremony.

Al Baker refused to blame Airbus for the failure of Qatar's first A380 to display at July's Farnborough air show - the first aircraft was supposed to be delivered before the event. With the airframer's chief executive Fabrice Bregier beside him, he said the delay in delivery was down to Qatar's high standards. "It's from us because of our very stringent demand for quality. No [other airline customer] would have delayed it for the reasons we did."

Al Baker described taking delivery of the A380 as a "proud moment", describing the aircraft as a "masterpiece which transcends anything the aviation world has seen before".

In a sideswipe at his Gulf rival Etihad's A380 recently-revealed cabin product, he apologised for not offering "residences, butlers or suites", but said that instead, Qatar's interiors had "class."
Top


Regarding new A380 routes, here's what Al Baker had to say about it:


http://www.flightglobal.com/news/art...80-hints-at-further-orders-403756/
What we leave behind is not as important as how we've lived.
Top

It will fly to DOH 18/09 and will fly to LHR on 10/10. i think it is a long time to keep it on the ground ?
will they fly it to regional destinations for crew familiarization ?
Top


AFAIK nothing has been announcement (yet).
What we leave behind is not as important as how we've lived.
Top

Great picture. I really like the Qatar livery on the A380. 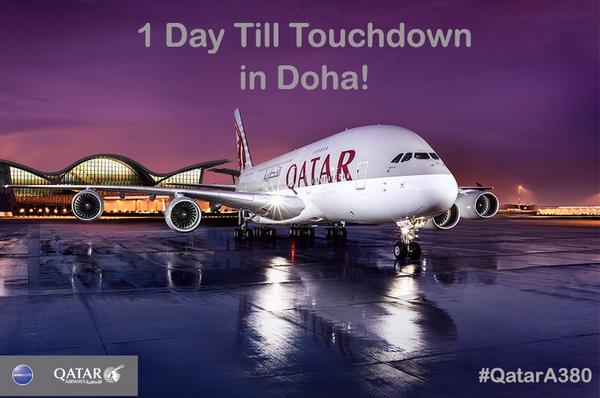