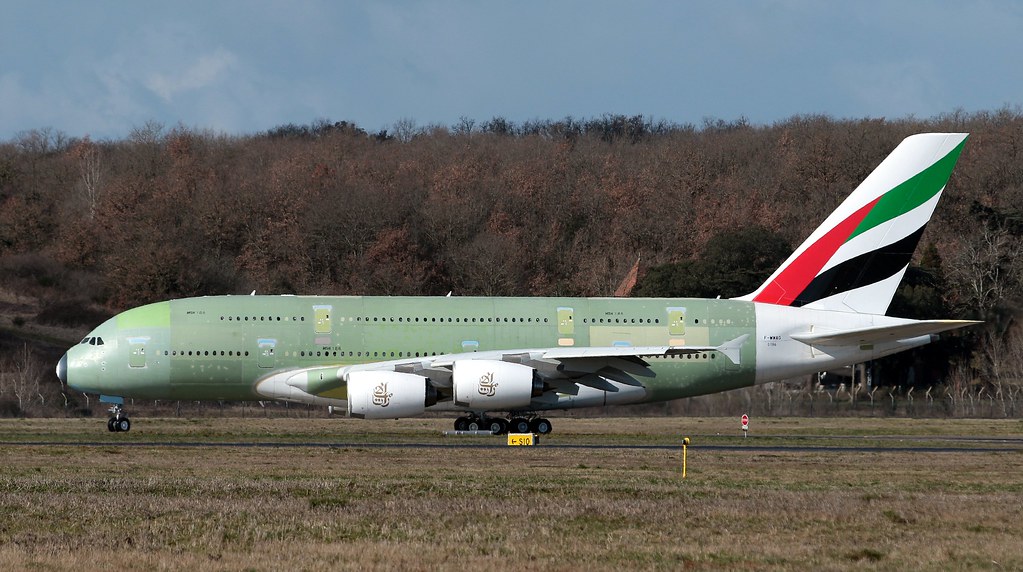 A380 NEO thread is archived so I'll stick this flightglobal article here as info.


Thank you for the article. But I do not really understand the pessimism. You have a plane which is now reaching break even on production costs. You have a risk-sharing partner in RR which might cover most of the development costs. You have a customer committed to 100 more of the type, and by 2024 probably interested in ordering 100 more to replace the earliest frames.

So stopping now would make less sense to me than continuing with the NEO.
Top

Some good points in the article, art.

My own feeling is that increasing engine power means that four engines are rapidly becoming 'out-of-date.' Two engines increasingly look like being 'enough' - the B779X looks like being capable of carrying over 400 passengers, at much lower cost per seat than any sort of four-holer?

That already looks like putting the B747 out of business. It seems to be just about certain that it will shortly 'call time' on the A380 as well?
Top

Rgds,
PW100
Immigration officer: "What's the purpose of your visit to the USA?" Spotter: "Shooting airliners with my Canon!"
Top


When you say over 400 seats, are you talking about the unrealistic Boeing numbers? The current 77W has over 400 seats in 2 class configuration but the 779 might struggle in a 3-class layout to reach 400 seats.
Top


The fuselage of the 777X will be nine feet longer, enzo011, and wide enough to allow ten-across in 'cattle class' - 400-plus looks very possible.

Also interesting that Emirates have ordered 150 of them? Against only 50 A380s?


Indeed. One question which was partially covered already - Airbus does take first flights from TLS directly to XFW? So they do RTOs and check all systems, and then first flight goes directly to Cabin outfitting?
Top


Fair enough, enzso11. Except that all I was basically pointing out was that there now appears to be a clear 'divide' between the two main manufacturers. Airbus is 'sticking with' the A380, whereas Boeing seems to be confident that a 400-plus-seat B777 will be competitive. Twin versus four.......


Your A380 views are well documented and understood. Surely such diversions can be off limit on a thread focussed on model specific production.
Top

Emirates is talking about the next 100 frame order for the A380. Tim Clark is pushing for the neo.

The open question about, if Emirates will be using A380 after they start receiving the 777X seems to be solely in your mind.

I think the order numbers in the last years have somehow addled the brains of some posters on A.net. A 100 frame order, even a 50 frame order from Emirates would be enough to get the neo out of the starting holes. Quite a few versions of widebodies, also Boeing widebodies, have been started with fewer orders. And quite a few widebodies have seen an advanced version with new engines before the production reached 100 frames.

Others reached above 100 frames but not 200 before being uppgraded.

Others never reached 100 frames and had no direct upgrade

What is so strange if the A380-800, after a production run of above 250 frames gets a new engine?
Those numbers have been normal in the past decades.
Top


Indeed they have. But it is not only the total number of copies build, but also the timeframe within those copies were build.

The current A380-engines are designed and developed roughly between 2000-2004 with first flight on the A380 in 2005. Since the B777-X program is profiting hugely from a totally new engine with technology from the 2015-2020 timeframe it is only logical to have a competing engine of a comparable technology standard on the A380, which has to be a neo of course.

The RR-Advanced is the engine which almost certain will be selected if a neo-version of the A380 is to be launched. And that will keep the A380 very, very competitive to any other large wide-body airliner. But the numbers need to add up before a positive decision can be taken on developing an A380-neo.
Top

MSN202 EK #70 is confirmed on convoy #6.
What we leave behind is not as important as how we've lived.
Top 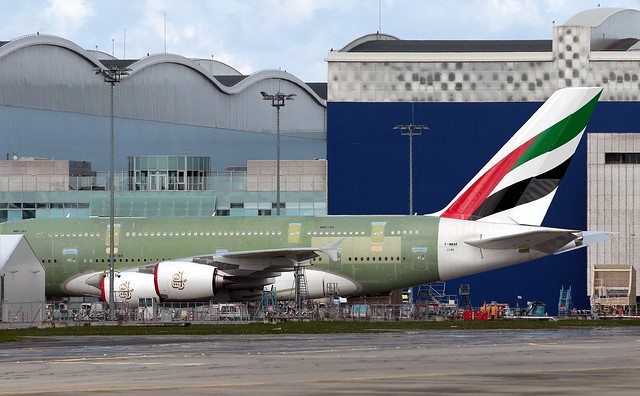 Whilst Qatar sing praises of A350 introduction, richly deserved, I hope their A380 record also of note. Little evidence of any hiccups, consistently ahead of schedule (arrival times)with moderate work rates over first twelve weeks in service. Albeit a much more mature product still commendable.
Top


mostly, yes. however, there have been cases (recently about 1 in 7 roughly) when after the first flight the frame returned to TLS
Top

Tim Clark hints that the remaining 50 A380's on order might be powered with RR instead of EA.

So from that article EK would " look at an possible order for 200 A380neo's " to replace the existing fleet.
That will be fascinating to see how they will dispose of those 140 existing frames then !
Top

MSN201 EK #69 finished body join and was towed to the next phase of assembly.

So from that article EK would " look at an possible order for 200 A380neo's " to replace the existing fleet.
That will be fascinating to see how they will dispose of those 140 existing frames then !

200 changes things abit! Phew there is just no stopping this guy! If true then the NEO is a slam dunk. And RR do get the extra 50 CEO's then they will be well up for it!
I noted he referred to a RR XWB derivative. I got well told off for suggesting this - unless 'the advance' can indeed be viewed as an XWB derivative.

Disposing of existing frames.
No one has suggested it (perhaps because its a bad idea dunno). But soon (2020) they will have the 2 international airports as a home base.It seems to me that their 'center of the World' geographic positioning is just as good for cargo as it is for Pax - no?
If so why cannot these 'old' (well they are not really) frames have a cargo door put in them - it was planned and designed originally anyway.And turn them into giant cargo planes. Granted they wont have the maximum lifting ability of the original 388 cargo plane. But the total weight that 388's can lift has been pushed up and up over the past 10 years. It is a pretty efficient aircraft in that respect - being slightly 'overwinged' becomes a positive advantage in that scenario.
Could Emirates do to the cargo market what they are doing to the pax market?
Imagine having a 100 'Free' 388 cargo planes positioned right at the center of the geographic World.Interesting I would have thought.
Top

It has been said on here before by those in the know that the pax A380 can't ever be converted to a 380F due to weight limitations on the two floors.
Top

Reply 223.
But are they right?
Airbus have to my knowledge said nothing on the matter. I will leave them to speak first personally. Other aircraft are built to be pax carriers but get converted to cargo - what is so different about them?
Not suggesting it will be able to carry the densest/heavy loads - not even the origonal 388C was designed to do that (leave that job to the 748).But that is not the only cargo that is carried - in fact that is the minority.

I still say 'watch this space'.But I accept it is speculation at this stage.
Top


Other P2F conversion programmes include the strengthening of the floor beams, IIRC. Why should it be impossible for the A380?
Top


Bad idea... Unless, you think Fedex-ing my overnight package from NY to Florida an extra 15 thousand miles by air is cost effective?


Dazzling numbers if they can make that work.


There are many candidates which could make an A380 work, especially if they do not have to pay the full price for a new version. Perhaps even some US-carriers.......

I think Airbus needs to stay strong and hold out a little while longer.


It's the 777X all over again. About 1 year before Boeing launched the 777X Clark started talking about 50 aircraft. Then it was 100 aircraft. Eventually he ordered 150 777X jets with another 50 options.
What we leave behind is not as important as how we've lived.
Top

Cabin First Flight for MSN177/ Lufthansa D-AIMN is currently under way.
Aviation is proof that given, the will, we have the capacity to achieve the impossible. - Eddie Rickenbacker
Top


Existing cargo hold for "cargo"
Top for light stuff - electronics, documents, flowers, .... you get the idea

And then, the main deck for fish! Heck, you could even have manned processing on-board = raw fish uplifted, sushi unloaded! Why waste valuable time when travelling?
Top

MSN177/D-AIMN, has returned to Hamburg after a 3 hour and 52 minute flight.
Aviation is proof that given, the will, we have the capacity to achieve the impossible. - Eddie Rickenbacker
Top

To quote sassiciai from the last post in the closed thread:

And then, the main deck for fish!

Has anyone considered proposing that plane to Icelandair? I thought they make a living from flying around fish. 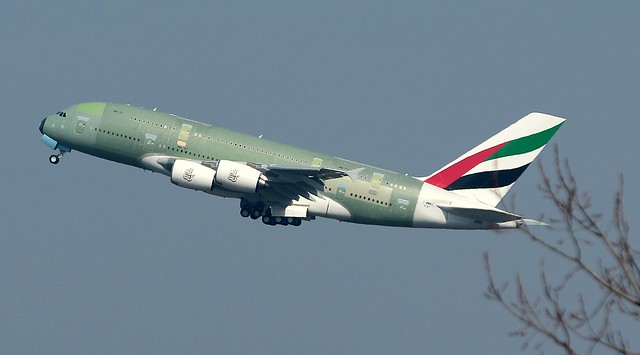 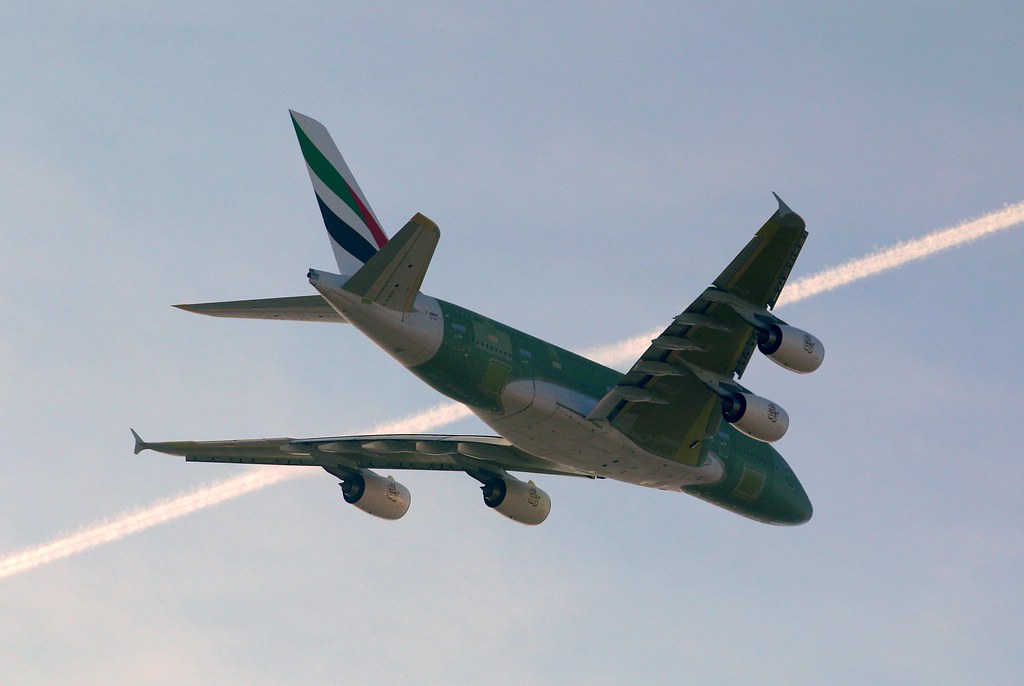 Ferry flight msn187 F-WWAH 10/3/2015 by A380_TLS_A350, on Flickr
Aviation is proof that given, the will, we have the capacity to achieve the impossible. - Eddie Rickenbacker
Top 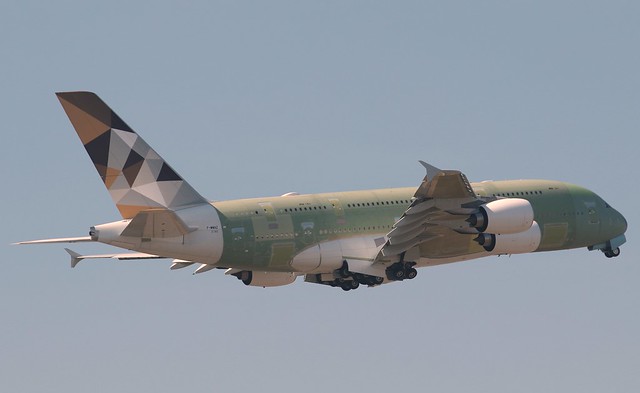 
Despite the white engines I like that new livery of EY more and more when I see it.
Top

MSN203 EK #71 is confirmed on convoy 7.
What we leave behind is not as important as how we've lived.
Top


That is halfway on the number of copies of the A380 EK has ordered. 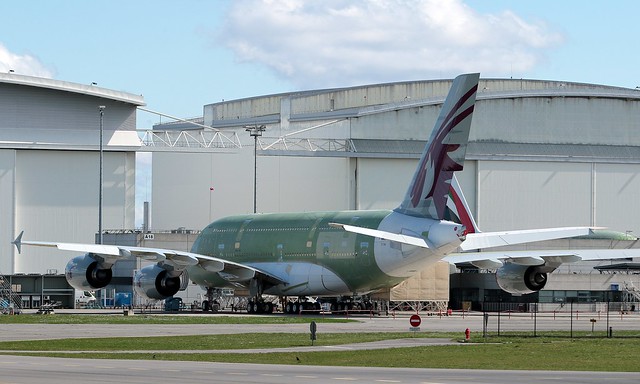 Emirates (EDG) just departed Bordeaux after completing door modifications.
Aviation is proof that given, the will, we have the capacity to achieve the impossible. - Eddie Rickenbacker
Top

Korean Finance Lease will finance the second A380 (MSN 170) for EY.

http://www.arabianaerospace.aero/kor...0-financing-for-etihad-s-a380.html
http://www.eturbonews.com/56713/etih...airways-a380-korean-financing-deal
What we leave behind is not as important as how we've lived.
Top 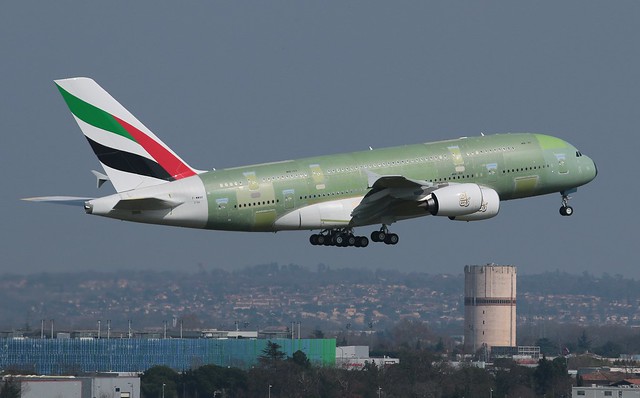