A350 Tour Of The Americas

United employees, invited guests, VIPs, and other industry press insiders are getting a very early sneak look at ORD at the A-350 because the airplane is en route to the annual Oshkosh air show in Wisconsin


http://www.bizjournals.com/chicago/n...ak-its-newest-model.html?ana=yahoo
"Those who would give up essential liberty to purchase temporary safety deserve neither liberty nor safety!" B.Franklin
Top


I'm not disputing what you're saying. You're missing the point though, this is a new bird UA is buying and you'd think UA would want to show it off. Look at the picture above, ATL (DL) places it at the concourse, ORD, (UA) a remote hangar.
Top


She will be in a hangar at DL TechOps for most of the visit to ATL as well. The only reason the plane was brought to a gate was so that all on board could clear customs.
Top


As my flight to SFO was taxiing passed TechOps yesterday evening, I was able to catch a glimpse of her inside the hanger with the red doors, as I could just make out the markings on the rear fuselage! There was only about a ten foot opening between the hangar doors!
Top


Show off a plane that has absolutely no UA livery on it, and not even any UA titles on it? Most people are not going to see the plane and go "wow look at United's (or Delta's) new plane!"

Hence why once everyone clears customs both airlines are just parking it in and by hangars.
Top


I doubt the airlines are the ones deciding where to park it. This is Airbus' tour and I bet they're parking it wherever it's most convenient/cheapest to accomplish their goal (interior tours with airline reps and other partners).
Top

This tour is only for a select few. Saw it today at the TOC inside bay 10. The tail was sticking out so they could run the apu, likely for a/c. Us common folk were only allowed to stand in a little roped off area forward of the plane. I didn't even bother with a picture. The light was really bad from that angle. Too bad they would not let us walk around the outside even.
Top

Got to tour it today. Absolutely amazing. Can't wait for Delta to get some.
Top

Why is it going to Newark as well as Chicago? And why Milwaukee?
Top

Also got the opportunity to walk through her today. Beautiful bird. Can't wait to see those engines at TechOps...


When Boeing brought N7771 to DL in 1996, everyone could walk through the cabin and the engines were open for inspection. Test flights were also conducted with invited guests.
This plane is built to withstand anything... except a bad pilot.

The A350 is online in Atlanta and preparing for its flight to Newark!

In other news, AirwaysNews ran a piece this morning on the Americas tour.


AirVenture is at OSH, not MKE. It's apparently spending a couple of days there and a couple of days before that at MKE. So same question: why Milwaukee?
"You're sitting. In a chair. In the SKY!!" ~ Louis C.K.
Top


During flight performance Airbus can only have two pilots and two engineers onboard. The aircraft will be in Milwaukuee to drop off the 30-40 Airbus employees going to Oshkosh. They will drive to Oshkosh from Milwaukee.
Top


Will it ever land at OSH or will it just take off from Milwaukee, do the flight demonstration over OSH, and then go back to MKE?

Because if it was going to land in OSH, it seems to me that it would make more sense to drop off the employees there instead of MKE.
Top

Since it is doing flying displays at OSH, I'm sure its more than just people that need to be dropped off.

While on the tour, I'm sure they are carrying AOG equipment, catering and other additional supplies and baggage for those other Airbus employees. I sure they remove all non necessary equipment from the aircraft while performing those aggressive airshow maneuvers.

It's better to remove and store those items in MKE than OSH.

Just a thought.
You can't beat the Experience.
Top


The Beer is better.


I agree. The Airbus security guards are just a little too proud of their company's new invention to the point that they turned me off to their new product. From what I witnessed many of the tour invitees fit a skinny low cut dress quite well as well the welcome on-board Airbus hostess. Dog and Pony show at the least. Would have liked to have some of the freebies handed out though. Just another flying machine to be had. Not impressed. XWB= ability to add another seat to the row.


Yes it will land in Oshkosh. It will be on static display for two days with tours given.
Top

A small update, this aircraft will be gated at B16 upon arrival at ORD this morning then eventually moving to UA's hangar.

ORD's in a westflow configuration currently, so hopefully they'll be landing 28C then taking the tour route of ORD. But knowing UA, they'll press the Feds for 27L so it's an easy landing and taxi into the B gates.
Top

A new video from Airbus about the first half of their tour: South America


Great. Thanks for sharing.
Top

"Goin' up to the spirit in the sky"
Top


I don't often quote myself, but here she is... 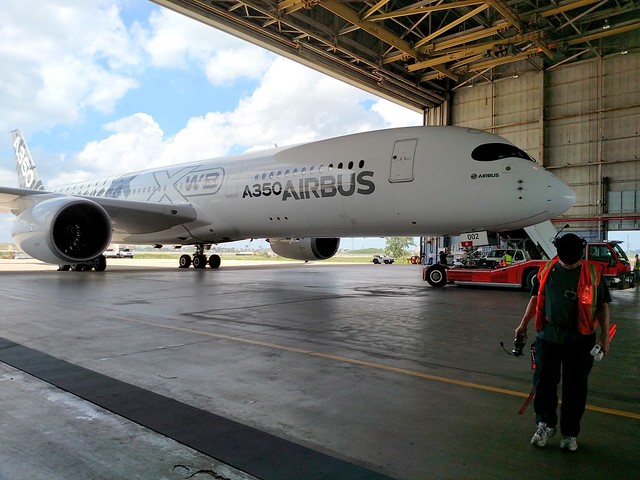 I saw the A350 in DUB last week. It's a beautiful aircraft, but I'm looking forward to the stretched version. Hopefully with bogies similar to the 777 (same tilt, 6 wheels)
Top

Is the paintjob on the rear and the tail a reference to carbon fibre?
After Monday and Tuesday even the calendar says WTF...
Top


Yes it is. I think even the registration (F-WWCF) is a reference to carbon fibre?
Like a thunderbolt of lightning the Dragon roars across the sky. Il Drago Ruggente
Top

Of course they will prefer customer (or potential customer) airline facilities (that determined where they even stopped on the tour after all), and of course within those facilities the facility supervisors will be involved. I was just pointing out that this wasn't United's tour, so it isn't United deciding unilaterally whether it stays at a gate or goes to the hangar.
Top

Airbus is also dictating how many people are getting any or all access to the plane. The airline gets to choose who but not how many.
Top

From an article I saw on Thursday, this plane did visit EWR, apparently for a show off to UA. it was on BOG the article noted to test ops in high altitude locations.
What will the routes UA will use this new a/c when they get them - maybe in part to replace 777's out of EWR, ORD, LAX and SFO for Asia destinations ?
Top

Here's a video of the A350 taking off from EWR from inside the aircraft:


Was at the EAA AirVenture Oshkosh today. Public was able to go in the aircraft. Flight deck was off limits to general public though.
Top

http://www.youtube.com/watch?v=MSzr1bpRf90
Like a thunderbolt of lightning the Dragon roars across the sky. Il Drago Ruggente
Top