Thanks for posting. Very quiet inside indeed.

The A321neo is being ferried back to TLS from PGF, They're not going above 10000ft which suggests that they're not presurising the cabin and the frame likely needs more repaires at Toulouse.

Story has now reached the media:

And more info on the engine cooling issue:

Startup time of 150 seconds, versus 50 seconds on the LEAP.
Top


I was amazed how quiet it was. Now some will be due to the plane being very lightly loaded. But the noise reduction is very significant.


There is question if the LEAP is 50 seconds total or per engine. The Pratt number is for two engines.


He's talking about 150 for both engines, LEAP said 50 seconds for one engine

From that same article:

For completeness, the LEAP quote:

OK. Then the difference is not that big.


So I guess this means quite a few airlines are already operating for years with comparable start-up times. Meaning it won't be a big issue but still CFM has a small advantage here.


The whole issue was totally exaggerated by media people which did not understand that there is pure physics behind it.
Also P&W did a bad public relations job about this issue.
Top

That is a massive performance considering they are the first delivered engines and FRA-HAM or FRA-MUC are very short hops with barely any cruise time. Let's see how it performs in maintenance & reliability over time, but so far fuel burn is certainly not a problem. No wonder PW was so confidently promising a 2% PIP for 2019 - IMO that looks more or less built into the current engine already, and will be unlocked as margins are removed.
Top


Airbus has recently fine tuned the A320CEO for single engine taxy
That can help the Purepower i guess.


Sure it is integrated in the NEO
Top


Most likely yes. Thanks for the info.

Photo of the CFM A321neo slamming the ground during a touch and go:


Ouch! Poor A321, it's a rough life after all! The wheels are off the ground so hopefully the wing is at flying speed otherwise we know why there will be "weeks" of repair work.

A Google translation of one paragraph of the article:

The spotters to AéroSpot66 were present at the time of the incident. "On landing the aircraft was prancing and part of the tail of the plane touched the runway. The aircraft" bounced "a couple time " . AéroSpot66 even has a photo of the incident that they decided to broadcast only after the official communication of Airbus. "We asked ourselves the question of dissemination because it could harm the driver as well as Airbus."

Maybe this is old news, but PW says they will deliver repaired engines for A320neo in June,

The engines were recalled to make "minor changes." Qatar Airlines, one of the first customers of the A320neo jet refused delivery of the planes due to the problem with the engine. While Pratt & Whitney will not comment, Qatar Airlines said it will demand compensation for an anticipated 'very huge delay" in receiving the planes.


But since they could accept the planes and live with the performance hits, I suspect they could claim at best only the losses due to those performance hits. That they could fully espect being launch customer.
Of course all depends on what is written in the contract, and how much Airbus (or P&W) will be willing to give up extra to save face, but I do not see him getting a mountain of gold this time. Makes a lot of fun for us, though, I am going to get my popcorn...
Top

Lufthansa will keep its A320neo jets close to home, for now.


I wonder what they mean with 'by April, most of that will be solved' ?


Maybe for April most will be solved but only in June all could be perfect and shiny, as AAB wants, carpets included.
Top

Just one more photo to demonstrate the size of the engines: 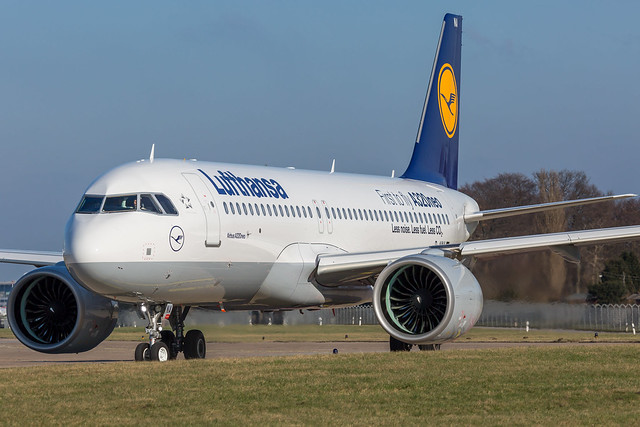 
they may now work perfectly just yet, but they do look simply gorgeous on the A320neo!
Top

MSN 6849 for IndiGo is airborne on its first flight:
http://www.flightradar24.com/AIB01II/
Top

MSN 6819 too has been equipped with engines. 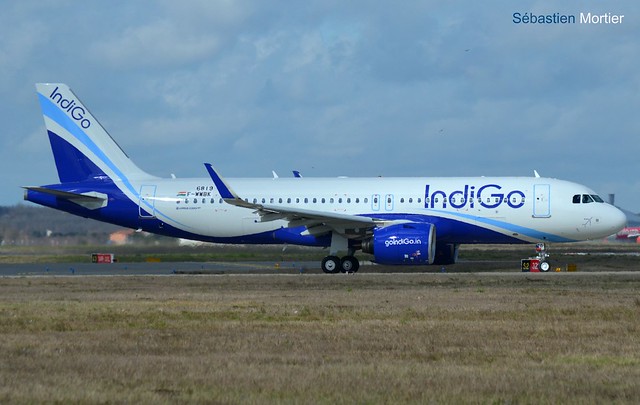 And MSN 6819 made its first flight several days ago:


Actually it did four flights until today. First flight was January 20.
Top


Indeed, looking at FR24 AIB05BK even departed from the delivery center in TLS, so there are now 2 IndiGo planes at the DC

Looks like IndiGo is close to getting approval from the Indian CAA (DGCA) to start neo operations:

Me thinks (dual) delivery around the same time, as there are now 2 IndiGo neo's at the delivery center in Toulouse


At least one plane is visible in this photo of the delivery center area:


Indeed, but I've seen both F-WWBK as F-WWDM depart from the DC on flightradar24 for a testflight

Had a quick look back in time: Both seem to have departed from the same spot at the DC, which could mean #1 went back to a hangar for some touch ups or changed to the other side of the DC or the frame in the pic is #1 and #2 switched places

The third LH A320neo has been fitted with its power plants.


We sure it's the third? I mean I can't read the registration on the tail... LH's second neo is still at XFW, it could very well be that one being readied for delivery

Hmm, somehow I believed the second one was delivered during a ceremony some time ago.
Top


Yeah it was a nice ceremony with two aircraft D-AINA and D-AXAX (Future D-AINB). But the delivery flight with the journalists was done by D-AINA and the other was left at XFW.
Top

It ended up being this option: 
This picture from XFW-Spotter confirms that story, see NB on the tail:
http://www.flickr.com/photos/xfwspotter/24621338894/ Has anyone heard details about what happened?
Top


It's all in the article: a bearing had seized within the main oil pump.
Top


Thank you, I wondered why Flightradar had not yet mentioned any flights with D-AINB.
Top

The F-WNEO and D-AVVA are clocking hours the last days, more time in the air than the LEAP frames.
Top


D-AVVB has not flown for about three weeks now...
Top

IndiGo is scheduled to receive its first A320neo in March with another 23 to follow in the next 24 months.

Although unable to see if the engines are fitted, the second A321neo was outside at XFW on the 25th
http://flic.kr/p/DXmtEn

But anyway, it's on the move and we might see more soon since it's due to fly in March as Fabrice Bregier said

what is the DLH A380 doing there; haven't they all been delivered?

Close-up on the engineless A319neo:

Looking at the orders for the 319 we see that both A319 airline customers (Frontier 18x and Avianca 19x) chose the CFM option, the only ACJ and 12x Undisclosed are still unknown.
Would there be a chance that MSN6464 is converted to CFM and there will be no (or a very late) P&W prototype?
Top
Locked