She has made daily flights for the last few days. But watching the flight tracks, man is she all over the place. Is that typical in flight testing? rbavfan wrote:
Did anyone notice when she braked, that there was a puff of tire smoke. Should not have done that with anti lock brakes when main tire never left the ground.[Edited 2015-11-07 01:137:45]

That is a misconception, for optimum breaking performance you need some slip, just not wheels locking up, so there is still some rubber to be converted into puffs of smoke.
So this is either not fully optimizer yet, or that is the result of optimum slip.

Best regards
Thomas
Well, there is prophecy in the bible after all: 2 Timothy 3:1-6
Top

I've noticed that when she lands, the engine cowlings don't open like they do when reverse thrust is engaged. So either they don't reverse thrust or her new engines don't need to open. Not sure which.
Top

Anyone know when deliveries to Trans States are supposed to begin?
Top

From the observatory deck at NKM, it's pretty clear another one left for Moses Lake. Celebrations and such occurring. Aircraft has the three stripe livery, so definitely #4.
rocketPower 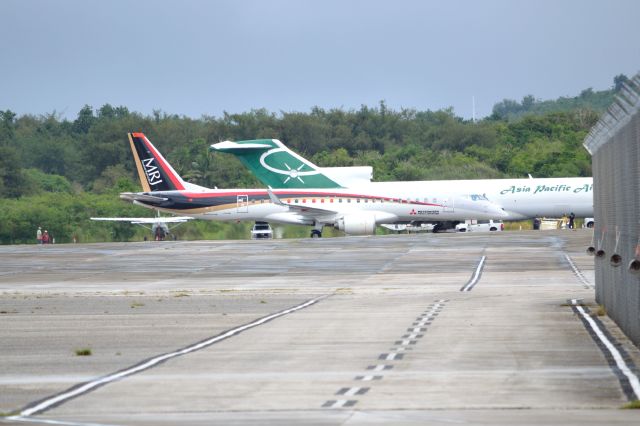 So what about #2 and #3, why is #4 going first?
What we leave behind is not as important as how we've lived.
Top

I haven't a clue.
I don't know how the MRJ can manage a non-stop Guam to Hawaii flight, a distance of 3800sm.
It could stop at Marshall Islands Airport, I suppose.

Also wondering why they are taking the southern route to get FTA-4 to the U.S. Has weather in the north Pacific near Alaska gotten that rough?
Top

ordell wrote:
Also wondering why they are taking the southern route to get FTA-4 to the U.S. Has weather in the north Pacific near Alaska gotten that rough?

It is possible that the aircraft has not been tested in icy runway conditions that are likely in Russia and Alaska.
Top

Very possible. Nagoya, where it was based, is warm. I never once saw that bird land in snow.
Top

One last hope to the mainland then. LAX, I presume?

BTW the YouTuber updated on the other planes:

It is reported that a part of the cover of main wing parts was damaged by a test flight of October 13 in FTA-2.
FTA-3 cancels maiden flight by some kind of troubles on November 1.
It is reported that the movement completion to the United States will be delayed until the next year.
Top

She appears to have left Honolulu. No idea of her destination.

Landed in SJC about 45 mins ago.
The red zone is for the immediate loading and unloading of passengers only, there is no stopping in the white zone...(Ai
Top

Ok I didn't expect that one. I figured LAX or OAK. But here it is.

Aircraft 3 (black stripe) just took off for the first time just now. Looked quite uneventful so congrats to all! This program is finally starting to get some real momentum.

I just have an ugly cell phone camera so I won't bother posting anything. I'm sure the spotters will have something good up soon.

FTA-2 is back flying after some wing damage in October.

Mitsubishi released a graph that shows what parts of the aircraft had to be reinforced.

With all the delays I can believe it.
Top

I'm very interested in knowing how the reverse thrust operates on this aircraft, is it through the core?
Top

Read an article on the fourth MRJ arriving in Moses Lake and saw this interesting quote:

“We brought the first jet in through Russia and Alaska,” Iwasa said with a smile. “But no one wanted to go that way again. So this time, No. 4 came here through Hawaii.”

I'd love to know why they felt that way.
Top

From the MRJ newsletter:

On November 1, we completed the static strength test conducted at the MRJ strength test station at Nagoya Airfield. The
static strength test is one of the airframe tests to inspect that the aircraft meets safety standards in strength. We have
carried out dozens of tests since October 2014 with the life-size static strength test aircraft. During the testing, the
maximum load calculated from simulation of all flight conditions was applied to all or part of the test aircraft. These tests
confirmed that the airframe had no deformation that might inhibit flight safety, also could withstand 1.5 times the maximum
load to be exerted for the specified time. The completion of the testing confirmed that the MRJ airframe has the structural
strength required for type certification. All of the technical data necessary for certification was also successfully acquired.

Going forward, we will continue to develop the high-quality aircraft that our customers can operate with confidence
Top

MRJ has passed the 150% wing bend test sometime during November 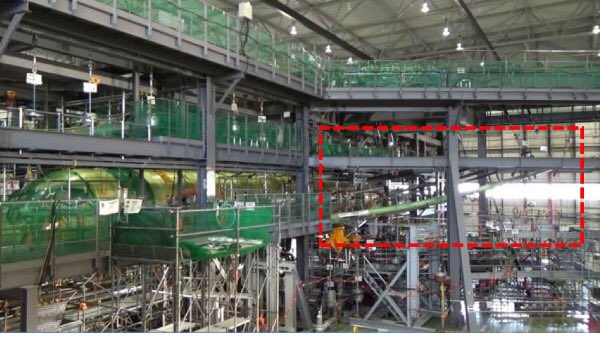 Aircraft 2 should be at Guam by now. Took off at 910 JST this morning.

FlightRadar has her in Hawaii as of noon PST.

Aviation writer Issac Alexander reports the ferry was suspended. he doesn't know why. So for now she's sitting in Hawaii.

I figure the pilots stepped out of the plane into Hawaiian weather and said the hell with going to Seattle.

Pic of her on the ground. 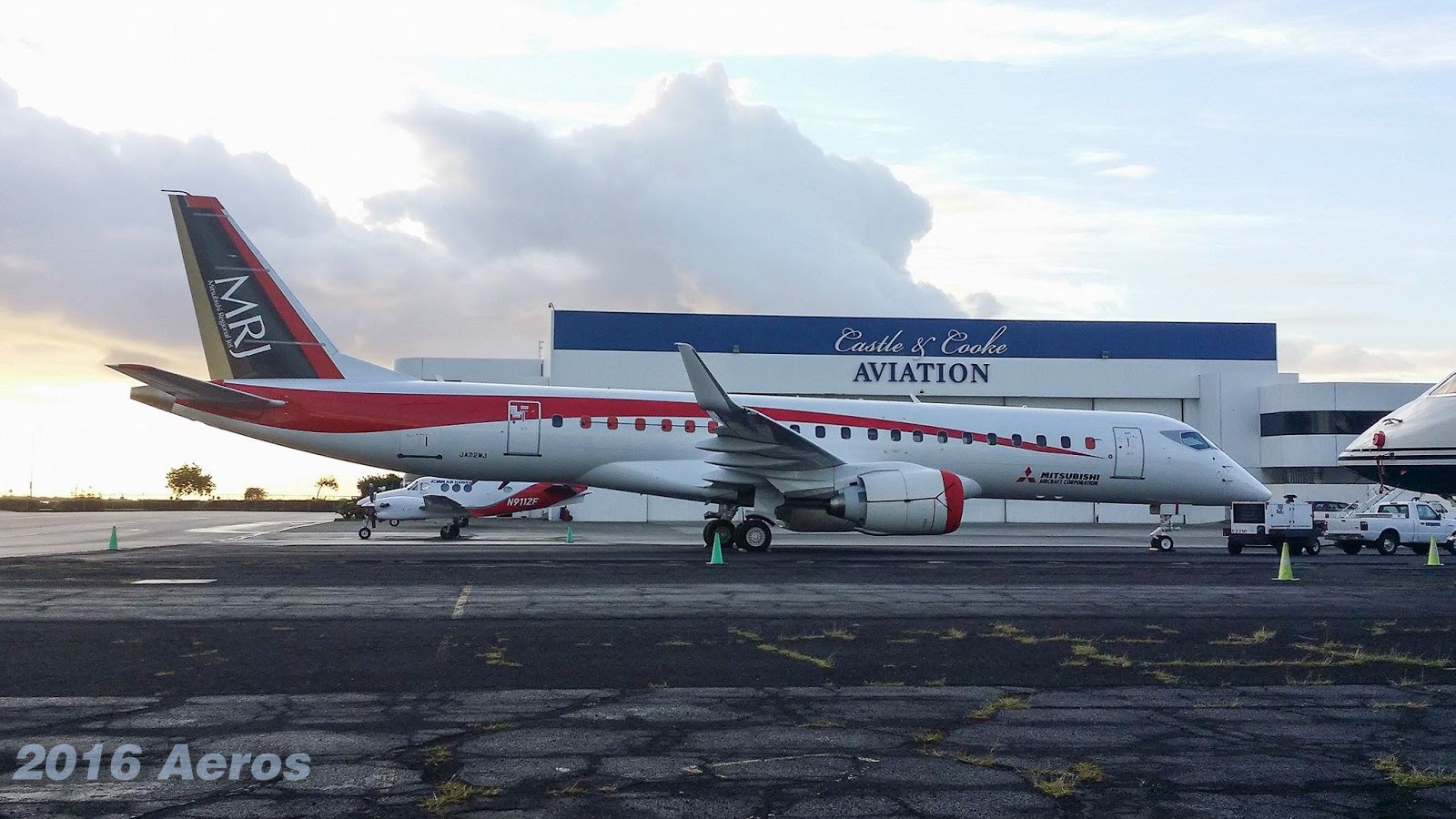 And she's in Moses Lake. Nice shot of all 3 MRJs together.

Here we go again. Another delay.

The Mitsubishi Regional Jet is facing yet another delay and is unlikely to meet its mid-2018 delivery date target, the president of Mitsubishi Heavy Industries Ltd. said in a recent interview.

“We are not yet in a situation where we can achieve” the delivery date, MHI President Shunichi Miyanaga said in an interview Thursday, citing difficulties in passing the safety tests.

Miyanaga did not say how long the delay might be, but it would be the fifth since the manufacturer started hawking Japan’s first home-made passenger jet. His remarks underscore the difficulties the contractor has encountered in building a jet in Japan.

The MRJ will is the first domestic plane since Nihon Aircraft Manufacturing Corp.’s YS-11 turboprop plane was rolled out half a century ago.

Miyanaga also said development cost have been higher than expected and might grow further.

Last December, Mitsubishi Aircraft Corp., 64 percent owned by MHI, put off initial delivery by a year to mid-2018 as it wanted more time to strengthen the wing design.

After flying three prototypes to the United States, the company has been conducting full-fledged test flights since late this year to get safety certification for the plane from the Japanese government.

“It is difficult to know when we can receive” the safety certification, Miyanaga said, indicating the tests are behind the delivery postponement.

“Procedures to scientifically prove safety have become far tighter than before,” he said.

ANA Holdings Inc., the parent of All Nippon Airways Co., will be the world’s first recipient of the MRJ.

“We are now explaining (to ANA) what problems we are facing and how we will deal with them,” Miyanaga said, declining to say exactly what they are.
Top

A plane spotter in Japan who has made many videos of the MRJ test flights says the last plane, the one with the black stripe, might head to the US next week.

That should be JA23MJ, which should have been ferried to the US at the end of last year.
What we leave behind is not as important as how we've lived.
Top

The 5th test aircraft (FTA-5 / JA25MJ) seen outside the assembly hangar, without engines:

Mitsubishi Heavy Industries is expected to announce another MRJ delay. Entry into service to be postponed until mid-2020.

Mitsubishi Heavy Industries has confirmed that the delivery of its Mitsubishi Regional Jet will be postponed yet again, this time to mid-2020. The delivery deadline was scheduled for mid-2018 for an order from ANA Holdings. The heavy machinery maker plans to announce the delay, its fifth, on Monday.

http://asia.nikkei.com/Business/Compani ... r-delivery
What we leave behind is not as important as how we've lived.
Top

Not good man, so many delays
Top

Wow... What was the original EIS?

It goes to show how hard coming up with a clean sheet design is these days.
I'll do my own airline. With Blackjack. And hookers. In fact, forget the airline.
Top

According to Reuters, they will announce more about the MRJ at a news conference on Monday, 23rd January. http://www.reuters.com/article/us-mitsu ... SKBN1540LW

With the new delay, the number of aircraft required to be sold to break even will be over 1000 - and almost certainly unachievable. Let's see what they say on Monday.
Top

Francoflier wrote:
Wow... What was the original EIS?

It goes to show how hard coming up with a clean sheet design is these days.

According to the latest schedule, first delivery to ANA was planned for mid-2018.

With 4 test aircraft in the air, what on earth could they have discovered that needs to delay the program for another 2 years?
What we leave behind is not as important as how we've lived.
Top

TOKYO -- Mitsubishi Heavy Industries has confirmed that the delivery of its Mitsubishi Regional Jet will be postponed yet again, this time to mid-2020. The delivery deadline was scheduled for mid-2018 for an order from ANA Holdings. The heavy machinery maker plans to announce the delay, its fifth, on Monday.

The MRJ, Japan's first homegrown commercial jetliner, has been under development by group member Mitsubishi Aircraft. A design modification that requires changing the location of some electronic equipment on the aircraft has forced the manufacturer to re-examine the delivery schedule.

In the fall of 2016, the Mitsubishi group informed parties involved that delivery would be postponed. Speculation put the new deadline for 2019 at the earliest.

The Mitsubishi group has spent billions of dollars on developing the commercial airliner, but the ever-growing time frame is becoming a financial burden. To further push the project, the group plans to set up a committee that will exclusively promote the project and report directly to Mitsubishi Heavy President Shunichi Miyanaga.