Airbus has announced that the A330neo is joining the A350 in its distinctive cockpit windscreen design.

I thought the point of the raccoon eyes on the 350 was to mask the questionable aesthetic appeal of the space shuttle/A380 style windows.

The 330 has perfectly fine looking cockpit widows so I'm not sure why they'd raccoon those up.

Love the standardisation on those winglets though. Them's sexy.

Oh it's only paint? I thought they would actually redesign the cockpit exterior to match the 350.
Top

will also have raccoon eyes

I'm not sure why Airbus thought this was worthy of an announcement. While Airbus might paint the "raccoon eyes" on the A330neo test aircraft, there will be no requirement for their customers to do so. With that being said, I am a bit surprised that Finnair and Qatar have painted the "raccoon eyes" on their A350s. I wonder which customer will be the first to defect and not paint the black border around their A350/A330neo cockpit windows.
First flight: NW DC-10 MKE-MSP December 1996
Most recent flight: DL/9E CRJ-900 LGA-MSN January 2020
Top

"Shades?!?"
I'm an aviation fan and I didn't know it had another name than "raccoon eyes."

When I talk to other people who are aware of it, "bandit mask" (and similar) are the only other responses I hear.

Hey, a reason: "The mask is there to facilitate change of cockpit windows. The windows go in from the outside and one has to detach the window surrounds to do it. To avoid having to paint with delicate airline livery colors the window surrounds come in “any color you want as long as it is black.”"


Except the cost of touching up the livery around the window. If the windows come from the factory black... Airlines will do what they must to save money. However, is there any reason older (white) A330 windows couldn't be substituted? Is there any difference (other than frame color)?

I actually find it a refreshing change. It rejuvinates the basic A300 design the A330 is based upon.
Sometimes the only thing more dangerous than a question is an answer. - Ferengi Rule of Acquisition 208
Top

http://margaretperry.org/wp-content/uploads/2013/07/mask-logo.jpg
"Everyone is entitled to my opinion." - Garfield
Top

PIA did something similar with its A300 fleet back in the 80s. I always thought it looked pretty neat, and I think the new "shades" make the A350 and A330 look neat too. Hmmm, makes them look so distinctive compared to their Boeing rivals. I think it looks great!

I just can't make the raccoon reference only to the 350 anymore.


Good to read that Airbus have mastered the Shades technology and matured it to such level that this technology can now be adopted by the A330 neo versions.
Immigration officer: "What's the purpose of your visit to the USA?" Spotter: "Shooting airliners with my Canon!"
Top


I agree. It looks very distinctive and I like it.

It's pretty obvious it's done to freshen up the look of the A330neo and differentiate it more from the A330ceo, as well as tie it closer to the A350.

As Airbus themselves put it:

“The A330neo complement the A350 XWB in the new Airbus Long-Range family, so it was only natural that the A330neo should have the same cockpit shades design than its larger sibling” said Eric Zanin, Head of A330 programme.

The new A330neo share the latest innovations and technologies matured on the A330 and the A350 XWB with composite Sharklets, new generation engines and systems. Both complement each other in terms of capacity and range - they address different payload and range requirements and operate together seamlessly. A common type rating allows A330 pilots to qualify on the A350 XWB in only eight days and fly on both aircraft under a single license – thus offering unbeatable cost efficiencies for airlines."
Top

I must say, the Raccoon Eyes on an A330 look really good!

Yes, it's just paint, but it's gives the A330neo and A350 a distinctive feature and appearance.

From afar, the windscreens look aggressive and athletic, as well as modern.
United Airlines: $#!ttin' On Everyone Since 1931
Top

On top of the similar look will there be further commonality between the A350 and A330NEO in terms of cockpits similar to the 757/767? Would a pilot trained on the A350 be able to fly the A330 NEO as well?
"The strength of the turbulence is directly proportional to the temperature of your coffee."

Rather like it! I thought on another thread A350 mention was made as to how the cockpit windows are fixed. I think they are externally fixed and the black frame holds the inserts. By being black it does impinge on livery paintwork during replacement.
Top

Does anyone know if it serves as purpose besides just looking different? I find it weird that Airbus would include it on the A330neo if it's just to look pretty.
Top

Kinda curious as to why they make a press release about it. Maybe they're bored at the PR department in TLS, who knows...


There is a rumor I am trying to start that talks of using the raccoon look on the NEOs; the CEOs will have a painted-on lorgnette to signify "classic".

Hideous, the eyeliner makes the A350 look horrible, and now they're ruining an already good looking aircraft.

Do operators have the option to not do this or is there going to be a pointless fuss like AA's chrome/grey A300's? I've wondered what UA in particular was planning to do when their A350's arrive, because I'm sure they're as concerned as I am about the "black eye" this will put on their livery...


I'm equally sure they're not concerned.

Here's an up close look on a model: 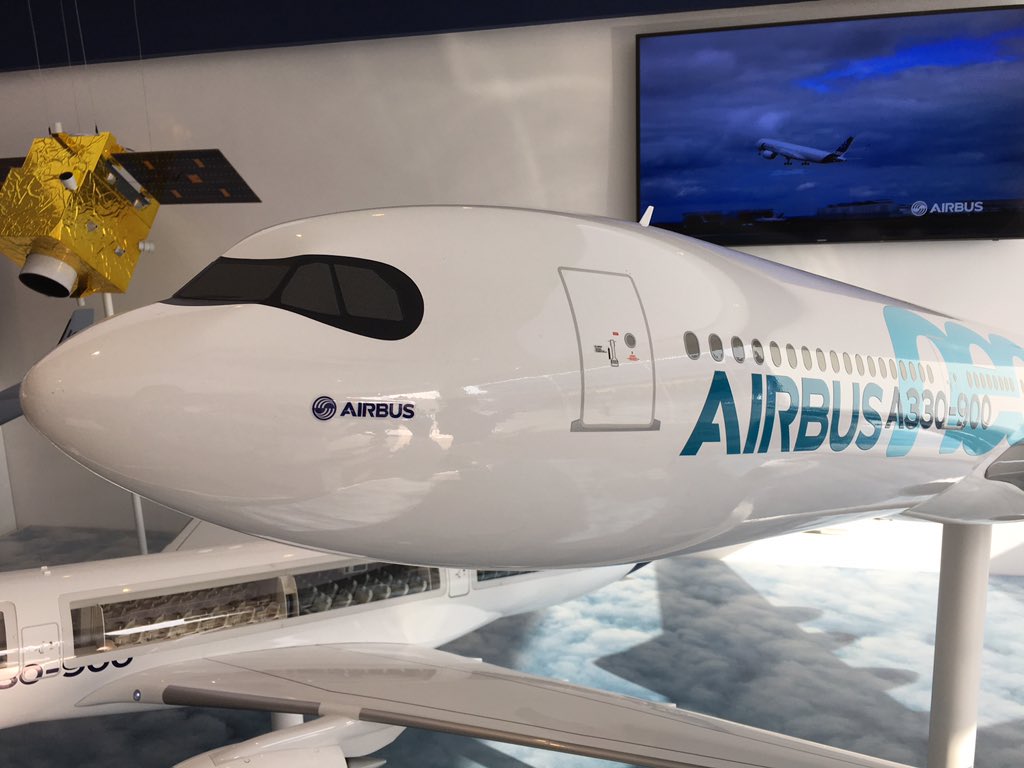 Its not even just teh frame but literally painted A350 style, kind of stupid.
Top

King of the racoon look will always be: 
I agree. It might look OK from a distance, but looking at that model indicates that it will look even ugly up close.

It even feels fake to me. The plane is supposed to look like something it's not.


Reduces glare in the cockpit, that's why its black.Lots of airliners used to be painted similar just not the entire window. If you ever notice some sport players put black lines under there eyes to reduce sun glare to there eyes.
Top

This will mean that half of Airbus' models wil have shades. Why not put them on the A320neos as well and make tem an Airbus hallmark. Then when the A380neo eventually comes around, it can get it too.
Top


I'm pretty sure the A350 cockpit windows - the same (I believe) as the A380's - are aesthetically challenged when left unpainted. But I agree it looks pretty pointless on the 330.


Hrmmmm sure if it extended on to the nose cone, but it doesn't so I doubt that expanation.

I really do think it's just down to the ugly.
Top


That looks ridiculous but not as ridiculous as the fact that they felt the need to make an announcement about this.
Top

I saw the announcement on Airbus's facebook page, and figured by the time I made it over to Anet, there would be a thread about the 330neo receiving the racoon mask. I, like many of you, am a bit nonplussed as to why Airbus deemed this of enough importance to publicize it to the extent they did. My best guess from the theme of their advertisement is to highlight the similarities between the 330neo and the 350.


Of course only people on this forum care. Is this a serious question? No ne is suggesting it will affect sales.

But please by all means put forward an alternative - we've had the window maintenance suggestion. Mmmmmmaybe but Airbus has never confirmed this when it would be very easy to do so. Which leaves us with... what, exactly? If there was a technical reason, Airbus could clear it up very quickly, particularly if putting the raccoon on the 330NEO warrants a media release.
Top

With how quiet things have been most of this year with the A330neo, I guess Air us had to do something to remind the public it exists.
Top

I like the retro but contemporary feel of the 'raccoon' eyes.

I also liked it back in the 70's as part of airline liveries. 
It was not a serious question. I was trying to prove how stupid the idea is that the racoon mask would be painted on for looks only. The looks of an airliner matter for absolutely nothing, so why would Airbus spend a single extra penny painting something to make the 330neo and 350 look better. Especially when a decent portion of the only group of people who care about airliner looks hate the mask.


Yeah, so that makes all theories about as equal as each other then.

It's rare that a manufacturer doesn't explain something on its planes - but in this case Airbus has chosen to stay mum. Why? And what about the operators? What's the big secret?


Yet you can't provide an alternative with proof either. Boeing hired a designer to make the 787 look all swish and inspiring. They scaled that back eventually but there was originally someone hired for aesthetics. Fact. So manufacturers do invest in these things.

You're also assuming there's a cost involved. Marginal, if anything, but maybe take a look at a rendering of the 350 without raccoon eyes and let me know how that works out.


That's true. I guess I meant any area forward of the cockpit windows. The 350 is really only raccooned around the edges of the window rather than covering the surface directly in front of the cockpit. Maybe because of the steeper downward angle of the nose.