The a/c is gray. The picture of it coming into a gate in sunshine shows off the white outlines around the doors. And no glare reducing dark paint under the cockpit windows. I wanted to give them the benefit of the doubt but the bulk purchase of AA stickers for these retro planes, and just mistakes/ omissions make the aircraft look cheap.
Top


I was trying to look back at my correspondence from that time. I ran across a youtube video from when TWA celebrated Randy's 75th birthday in 1999. Just google Randy Kramer TWA 75th. It's not super-professional, but it shows clearly how much everyone loves Randy, and what a true gentleman Randy is, doing everything he can to deflect attention from himself and put it instead on his coworkers and others, and to promote the airline. Everyone from the EVP of the airline, to the DFO, etc., all sent missives of congratulations, and it memorializes that that is when they dedicated the club to him, and spent some actual money on a nice display at the entrance. Randy and his brother both flew in the War, and his brother went to fly for American, and Randy to TWA, where he flew for 30-something years, appearing on the cover of the TWA timetable and elsewhere while he was still flying.

So when, after AA took over and some nitwit decided to do what they did, it was a disgraceful act that got a lot of attention from those who knew -- and therefore loved -- Randy. He very quickly asked everybody to chill, gentleman and positive person that he is. He had no sense of entitlement about what he was doing, and his sincere attitude was that it was absolutely their right to do what they did and that he had had a great run. I don't recall the exact sequence but, IIRC, the whole thing -- waaaay too late -- eventually came to the attention of somebody very senior at AA who had the ability to recognize the significance/stupidity of what they had done. I don't remember what apologies or invitations were extended, but in the end, Randy moved on.

I was so happy to see a photo of him in the paper from 2014, his 90th year, working with the Condor Squadron and looking like what most 65-year-olds look like.

And I also realize that Captain Randy wouldn't have wanted me to say a single word of this, so in deference to what I know would be his wishes, I will now shut up about it for yet another decade.
Top

Right so I can admit when I'm wrong - definitely grey. And it's that awful drab AA grey that they went with.

Strange and a shame.
Top

Didn't US Airways go back and redo the PSA retro jet after a good number of people pointed out the first attempt was not quite accurate? Perhaps they will do this now with the TWA plane, although I doubt it. White fuselage please and put the registration in red as well, as was done on TWA.
@dfwtower
Top


The black paint was removed by TWA in the late 80s.
This plane is built to withstand anything... except a bad pilot.

I know there are A.net photos, but I caught this jet at the gate yesterday from the Skylink train: 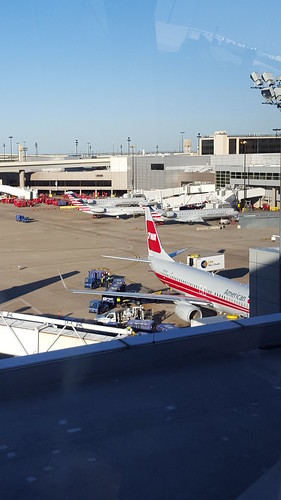 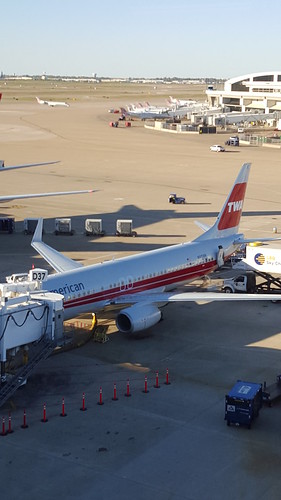 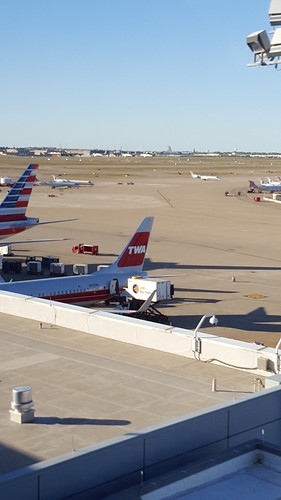 Thanks for the pics. I guess it depends on the lighting, but in most pics I have seen so far the gray is light enough to where it pretty much looks white enough. Yeah I know it's not perfect or how anyone else would have done it, but it's already done. We know American obviously isn't the best at executing old liveries.
I have been tracking the plane trying to see it fly over, but every time it comes to Chicago it's been dark


My question is - why?? It makes no freakin' sense.
Just when I think you've said the stupidest thing ever, you keep talkin'!
Top

That is one ugly plane. I know the livery is 'retro' by definition, but it doesn't look retro at all. Way too much red on the tail. Just ugly.

^^^ yeah you're right no matter what color scheme they went with, no matter what airplane they used, you're gonna have people crying and moaning one way or the other. Even though I think we can all agree AA didn't do the best job executing the paint jobs, I would still rather have what we have now rather than nothing at all.
Top

Yeah, it's grey. It's awful. Shame on AA. Same with
the Reno Air heritage jet.

If you're going to do something, do it right!

You know, there really isn't any excuse for AA to be painting these planes with a grey base coat.

Has there been any statement from AA explaining this?

It's disappointing that AA is doing a half-arsed job on these new heritage jets. I'm with everyone else in that you either need to do it right, or not at all. A faithful recreation is not that difficult.

Also, having seen that AA has a monochromatic version of the new logo, they really should use that and do what US did: color-match the logo to the livery.

To be honest, I think what's happening here is that the "Branding Gods" at AA are imposing their will upon these heritage liveries, and imposing completely arbitrary restrictions on what colors they can/can't use because it would "hurt the brand" (or whatever buzzword terminology they use)
I'd take the awe of understanding over the awe of ignorance any day.
Top

I'm surprised they didn't even bother putting the American flag above the TWA logo on the tail.
Top


Yes, I emailed AA about it and got a response - I have put the response on my website. Basically, it is indeed in the standard grey paint. The explanation was that with radomes, cargo doors etc being swapped out it would look odd to have a white fuselage with grey doors or radome.

The AirCal plane will have a grey base as well.
@dfwtower
Top


Pathetic excuse. Not to mention that the LUS birds are not grey.
Top


I saw it today in person and was trying to be open-minded about it, but it looked awful, especially because it was gray against a gray sky.


I'm hoping AA does this too.
Top


But minus the pearl clear coat.
Question everything. Trust no-one.
Top


Meeting or medium for an exchange of views. That is the definition of forum.


That's a pretty bad excuse they gave you, quite frankly. If they replace a cargo door on the Reno jet, there is still going to be a break in the cheatline. If they replace a radome on the TWA jet, those cheatlines will have a break as well. And seeing how their planes were bare metal with gray composite components that gave off a patchy appearance for all these years, I don't buy that reasoning at all either.
Top

Not bad at all. If only it was in white: 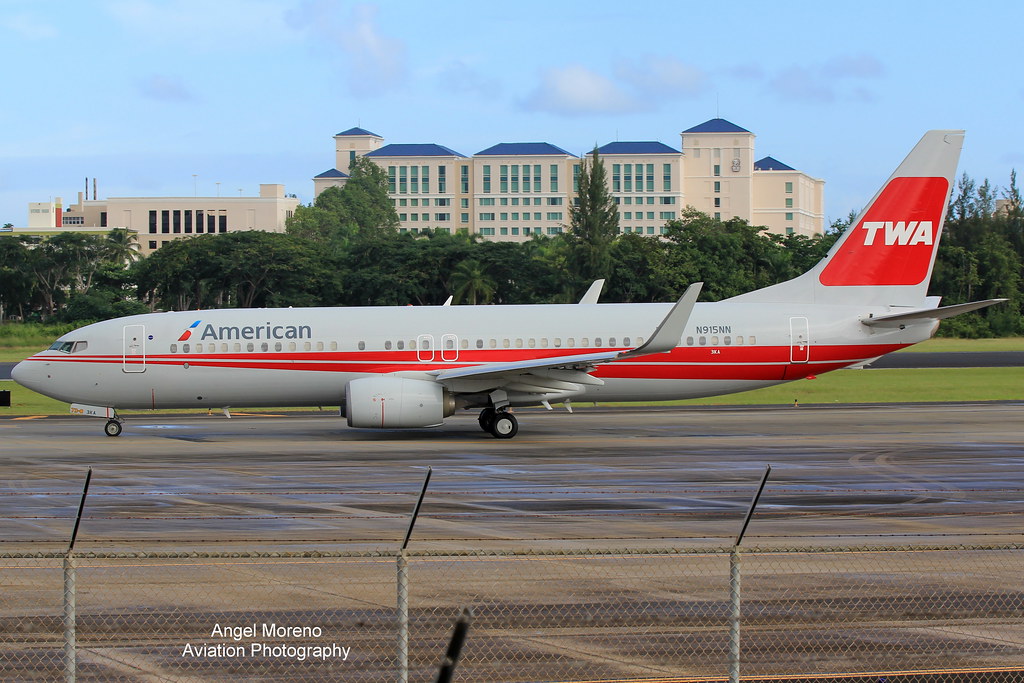 American Airlines (TWA Heritage Livery) / Boeing 737-823 / N915NN at TJSJ, by Angel Moreno, on Flickr
Aviation is proof that given, the will, we have the capacity to achieve the impossible. - Eddie Rickenbacker
Top

And they should've put red stripes on the winglets.
Top


Yes, I do remember those renderings. IINM they were up on the wall for a pretty long time at CHQ when you first walked in. To this day I think the reasoning for the A319s is still valid; while they 321 has surpassed the 319 to become the largest subfleet of the Airbuses, they're not as pervasive throughout the system, especially in smaller/seasonal stations.


Absolutely; the 737 classics were not long for either airline's fleet. This was reaffirmed back in 2009 I believe when US firmed up their last big narrowbody order with Airbus after reportedly evaluating 737NGs.

I just think it's funny to see comments like "this would have looked better on 'X' aircraft," especially the MD80s and 757s. Two aircraft that are in the process of being phased out, and are increasingly limited in where they're being flown.


I think it's good they decided to split the heritage jets between two fleet types, LUS/LAA roots notwithstanding. It did suck for a while to be in the western half of the country and only get to see the HP heritage jets regularly as the others were all (and still are) on EOW 319s. That double whammy meant that they were not only limited by the ongoing contract dispute, but were also more heavily deployed within the old PMUS network that needed those capabilities. At least now it's more of an even spread.


They started retiring those already.


We'll see if they do that again on the next retro jet, which will probably be Air Cal.
Ben Soriano
Top


They said they were. I imagine it's in paint now and will show up this week.
Top


Yes, the email from AA directly said AirCal will have the grey base rather than white.
@dfwtower
Top


Line number 722 is rather youngish. Are we sure that isn't for paint?
Top


Don't know, but it flew there as AA1002, which is the flight number it operated the day before between MIA and DFW.
Top

These retro liveries just make me sad...so many great carriers swallowed up over the years. I flew on one of TW's last flights...was from STL to MCO. Very senior crew and it was their last trip together. To learn after what AA (and APFA) had in store for those proud TW crew made me feel so badly for them. Seems like salt in the wound to paint a TWA retrojet.
Top


I disagree. Too many stripes is overkill. I never did like it when they added stripes to the engines of the 767s.

Yeah I think winglet stripes would have been over the top for this particular heritage livery.


When US Airways originally did those, weren't the planes white?
Why do Aerospace Engineering students have to turn things in on time?
Top


Yes but they just recently repainted them. Must have been after the repaints that they decided to make the 737 retros grey.
Worked at: CV62, RJTA, KNLC, CV63, KNFL, OKAJ, KTRI, CV67, KMGE, KNQX, KVPS, KPIT, KCVG, KTYS, KATL
Top
Post Reply