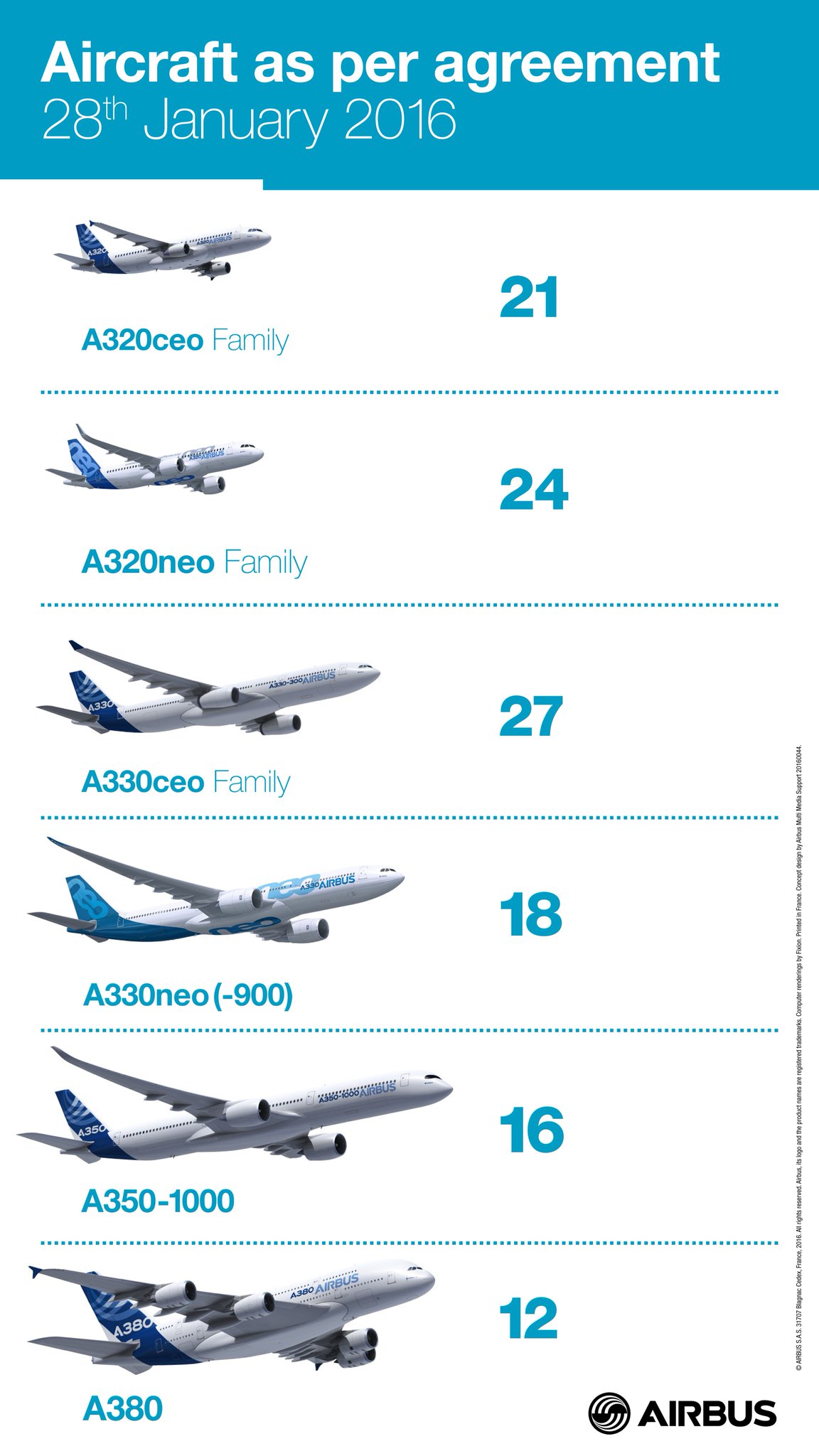 from the horse's mouth

Deleted, I was late on the button for the official press release!


Nice mix of ceo and neo.


Again, nice mix. Must admit, I thought there'd be more A320s, but what the heck, that's a very nice order in anyone's money.


12 A380s. Some people will be choking on their dinner tonight!

So, are these all for Iran Air? Struggling to see where Boeing long-haul planes would be needed with that mix.


All -1000s. I just updated the first post.
What we leave behind is not as important as how we've lived.
Top

Congratulations to Airbus Industrie on this historical order. I'm keeping my fingers crossed that all of these aircraft are delivered without any obstructions, political or otherwise.
The queen of the skies is dead.
Top

I was expecting the A359 here.
Top

Incredible!!
Who would have thought the next 380 customer would be Iran last year ?
Congrats to Airbus
Top

Its a funny old world isn't it.

Well done Airbus, Iran and RR for being progressive and looking to a co-operative future.

I'm going to assume that RR are going to sew up the WB engines on this which gives them a count of 170 plus spares a good day for them.

No ATR's so the 100 seat and regional "jet" order is still in play, lets hope that Canada can free Bombadier to start a C-Series sales campaign.


That could very well be the case. PM and RR will be pleased when that happens!

Iran officials have signed two agreements with Airbus covering new aircraft orders and a comprehensive civil aviation co-operation package. The agreements were signed at the Élysée Palace, Paris, during Iranian President Hassan Rouhani’s official visit to France with French President François Hollande.
Iran Air has signed an agreement with Airbus for the acquisition of the full range of new Airbus airliners (73 widebodies and 45 single aisle). This includes pilot and maintenance training and support services to help the entry into service and efficient operations of these new aircraft.
In parallel the Minister of Roads and Urban Development, Dr. Abbas Ahmad Akhoundi, has signed a comprehensive co-operation agreement as part of the country’s modernisation of its civil aviation sector, to support the development of air navigation services (ATM), airport and aircraft operations, regulatory harmonization, technical and academic training, maintenance, repair and industrial cooperation.
These two agreements took place as part of the implementation of the JCPOA (Joint Comprehensive Plan Of Action) on January 16th 2016, and its associated rules and guidance.
The agreement for 118 new aircraft signed by Mr Farhad Parvaresh, Iran Air Chairman and CEO, includes 21 A320ceo family, 24 A320neo family, 27 A330ceo family, 18 A330neo (-900), 16 A350-1000 and 12 A380.
"Today’s announcement is the start of re-establishing our civil aviation sector into the envy of the region and along with partners like Airbus we’ll ensure the highest world standards,” said Mr Farhad Parvaresh, Iran Air Chairman and CEO.
“The skies have cleared for Iran’s flying public and Airbus is proud to welcome Iran’s commercial aviation back into the international civil aviation community. Today is a significant step in the overhaul and modernisation of Iran’s commercial aviation sector and Airbus stands ready to play its role in supporting it,” said Fabrice Brégier, Airbus President and CEO.
Airbus is the world’s leading aircraft manufacturer of passenger airliners, ranging in capacity from 100 to more than 500 seats. Airbus has design and manufacturing facilities in France, Germany, the UK, and Spain, and subsidiaries in the US, China, India, Japan and in the Middle East. In addition, it provides the highest standard of customer support and training through an expanding international network.
Iran Air, we take you there, we take you back!
Top

Great for all involved can't wait to see how Iran Air emerges.

This is a huge order. Will be interesting to see how the financing plays out. This is an EK size order. With a book value in the tens of billions of dollars. Iran state media is reporting that the planes will be paid for within 10 years. http://news.yahoo.com/iran-delivery-...four-years-082413259--finance.html

Will be interesting to see what is made public about financing. This just seems like too much money for Iran Air in the short term.
Top

It must have been discussed in other threads, could anyone do a recap of possible routes for the 380s.
Thanks in advance.
Top

Hell of an order! Any info on delivery schedule for different types ordered?
Top

Bregier had spoken late last year about two orders in the pipeline - one for 10-12 frames and another of upto 20.
I guess this is the first one, who's the second? Surely it can't be tomorrow?!?
Top


LAX, JFK, LHR, CDG and KUL have been speculated on.
Down with that sort of thing!
Top


My feeling is TK for this.
BV
Top

It will be interesting to see when these aircraft are going to be delivered.

Any news/update on the rumored used A340's for intermediate lift?

how about all the other Iranian airlines, that order is for Iran Air only?

Good news for Airbus and Rolls - Royce.
Why endure the nightmare and congestion of LAX when BUR, LGB, ONT & SNA is so much easier to fly in and out of. Same with OAK & SJC when it comes to SFO.
Top

Wow, what an incredible order. Fantastic news for Airbus!

There will be a lot of A380 doom-sayers eating large portions of crow tonight (although they will probably be eating it behind closed doors very far from Anet!)
Top

This is not the end of the story, just Iran Air order list !
We may expect Mahan Air, the largest Iranian airline today, to move also, as well as the inception of Iranian LCC.
Top

Iran should have gone all the way and purchase "NEO's". Leave the CEO's behind.
Why endure the nightmare and congestion of LAX when BUR, LGB, ONT & SNA is so much easier to fly in and out of. Same with OAK & SJC when it comes to SFO.
Top

Tehran is the new Mecca for Airbus and Boeing

Is there any possibility that IranAir will launch IAH?
Always look on the bright side of Life!
Top


If they need planes _now_, ceo is still the best option.

In similar fasion, I expect Boeing to give a killer deal for 777-300ERs, if US government permits the sale.
The queen of the skies is dead.
Top

Wow! Congrats to Airbus and IR on the HUGE order. I'm most impressed with the -1000XWB and A380 orders!


Looks like Boeing will lose out on this one..guess Donald Trump and the other idiots in Congress are happy Boeing will be losing out billions of dollars in revenues/income.

I guess this is his way of "making America great again"..

Once again, CONGRATS to Airbus & IR!
"Up the Irons!"
Top

Great news for Iran Air especially considering that the youngest aircraft in their current fleet is 12.7 years old according to https://www.planespotters.net/airline/Iran-Air.

Anyone hear anything as far as first deliveries?
Top

Impressive deal for Airbus. It will be interesting to watch from a deliveries perspective as this represents a massive expansion of Iran Air in a region with some serious competition. Either way, congrats to all involved.
Regards! JDief
Top

Do they say if the planes are only for Iran Air or some other airlines could get some of them??


Maybe they can sign that one in Italy, at least the ATR. Italy is a big partner in ATR. Italians are covering naked statues to please Iranians so they really predict good deals.
Top


Considering Trump is not in office, I do not see how he would carry any weight on this discussion. Boeing was never in the running on this one, they just kept Airbus honest and ensured they got a good value for their money. IMO it doesn't matter who wins in the US in November, Iran was never sending any of the recent re payment of funds anywhere near Boeing when it came to an aircraft order. Its going to be a while before any major US-Iran trade becomes normalized.
Congrats to Airbus on this one, they also inked a nice deal for auto production in Iran as well...big day for transport over there.
Top

Now they have some new planes maybe they can get a new website :p


Yes, this order is just for Iran Air.

From the Airbus PR:

Superb news. 12 X A380 is a much better result than expected.

Shame they didn't take up the, much anticipated, A340s, to tide them over, but I guess we can't have everything.

Disappointing that domestic politics is going to play a hand in, possibly, preventing Boeing being able to land a similar order, as I'm sure they'll have some products that would be perfectly suited to requirements the Iranians might have identified.

Though I am wondering if there's going to be reports of random explosions, on the 18:00 news, as all those who predicted another year with no A380 orders explode?
Ubique Quo Fas et Gloria Ducunt
Top

The CEO of TK said just a few days ago that they weren't considering ordering any A380s: WSJ: Turkish Airlines Chief Predicts Growth Despite Terror Attacks


It's even more impressive than an EK order as they ordered models from the entire product family.

IR is the flag carrier, no way those A380s would end up with another airline.