I know this is old news but who still misses AA's older and much more recognizable livery?
Cíao
Top

Meh, whenever I see an old AA livery next to all the new ones it just highlights how very old fashion and out of date it looks. I wouldn't say it is more recognizable than the the new one's tail (which I personally love, especially when they are all lined up at the gate). I do like the old eagle logo better than the eagle mark or whatever they call the new thing though.
Top

Like most people I was pretty shocked when the current livery was unveiled. We all knew something new was coming, but I don't think it was what anybody was expecting. It's really grown on me, though - as Polot said, when you see all the tails lined up, it actually looks quite striking, and up close the detail on the flag tail is pretty cool.

The few remaining planes in the old livery definitely look tired when you see them, and I always found the old eagle had a somewhat militaristic feeling to it. I appreciate the heritage behind the 1968 livery, but AA was in desperate need of something fresh - they had been trying to "spin" the old logo and livery for years to make it look modern, and weren't really pulling it off well by the end.
Top

I personally would like AA to keep the new livery but put the old eagle on the tail.
Top

Not only that, but the increasing amount of composite materials being used in modern airliners meant increasing amounts of gray patchwork paint that all but ruined the streamlined look of bare metal throughout the airframe (case in point, AA eventually made the minor revision of completely painting the tails grey on all aircraft for consistency because so many newer airframes used more composites in the tail).

If anything, I liked the Eagle livery more than the mainline livery because the stripes were bolder and more pronounced on the smaller fuselage proportion, and the Eagle logo looked better as a standalone logo than within the AA.

As for the new livery, I don't mind it. The flag motif on the tail is overly cliche', but it IS also very striking and stands out quite well. The peeled sticker Eagle-like logo leaves a lot to be desired, though. The scissor eagle might not look bad in that spot, but I'm not sure if it would work, either.
I'd take the awe of understanding over the awe of ignorance any day.
Top

I am one of the people, quite possibly in the minority, that like the new tail.

That said, I loved the bare metal approach AA had. The livery itself, I could take or leave, but the bare metal was great and, to me, iconic. But with the introduction of non-metal planes, they had a choice that had to be made. I don't necessarily love the exact color they chose for the planes, and the titles are not great, but I am a fan of that tail.
Top

ty97 wrote:
I am one of the people, quite possibly in the minority, that like the new tail.

That said, I loved the bare metal approach AA had. The livery itself, I could take or leave, but the bare metal was great and, to me, iconic. But with the introduction of non-metal planes, they had a choice that had to be made. I don't necessarily love the exact color they chose for the planes, and the titles are not great, but I am a fan of that tail.

I love the new livery, I thought it was executed well! The tail is absolute magnificent, especially in direct sun

2 ears for spatial hearing, 2 eyes for depth perception, 2 ears for balance... How did Boeing think 1 sensor was good enough?!
Top

The new look has grown on me though I do wish they had retained the 1968 eagle in it somehow. I bet in future decades it will return.

There are/were a few gate podiums around DFW that haven't been or weren't yet rebranded with the new look (Maybe in D?). Gosh it still looked handsome, though.

As for American Eagle, I think the new look did wonders for that fleet. They look upscale and modern to me now. The white just didn't look good with the striping.
Top

Not me! The old livery was horrible, definitely one of the worst. The new one is one of the best. All personal opinion of course!
Top

I personally loved the look of the forever old polished livery on the MD-80 series and oddly the A300 looked super sharp (even with the random composite pieces)
But the new livery is worn very well by the wide body fleet! Personally I love the boldness of it, however I respect those who don't. I also liked Delta's wavy gravy but that's for a different topic!
Top

The old livery originally had issues, but were quickly refined and became one of the most recognizable brands in its 45-year history.

It's hard for me to condense my opinion on the new brand, but simply put: it was a disaster in development from start to finish and the end result was something nowhere near worth the price (estimated to be $1.5 million), a major disappointment on the part of the designer's firm behind it (they provided incomplete guidelines, forcing the company to make their own), and a tail, love it or hate it, that did not meet the goal of a mostly positive consensus (31% voting to keep it, 29% voting to replace it).


No doubt the old livery looks dated in comparison to modern gradients, typefaces, and logos, but the horrendous choice for coloring the exterior of the new livery eliminates all benefits. Boeing 778X mentioned that the paint looks good in sunlight - which is fitting, because it was *only* tested on a beautiful sunny day, neglecting the look of it in any other weather condition. This resulted in the gloss serving no benefit on grey days, giving it the appearance of a cold battleship set off-balance with a color-heavy tail.

Is it fresher, newer, and trendier than the old livery? Sure. But from a design perspective, it looks desperate and rushed. I can't wait until it's replaced with something competent.
Top

What, you mean this?

Just saying, this is all relative. Nobody ever likes things to change from what they're used to. But in 30 years AA will change their livery to something else and you'll have a bunch of 20 and 30something aviation geeks saying HOW COULD THEY? It's an old story.

I personally think the livery above is a lot more attractive than the previous one, which always had a very 70's look to it. But the current one's a lot more appropriate for the current era than either of those past schemes.
I'm tired of being a wanna-be league bowler. I wanna be a league bowler!
Top

The last livery looked old and dated way back in the in the 80's. Thankfully modern production materials have finally brought an end to it.
The new tail stands out a lot better than the old Alco Anon.
Top

Even though I worked for a competing carrier back in the Nineties, I loved American's scissors eagle logo & their bare metal livery. At the time, one of my cousins was an AA FA, and American was almost always the first choice of my family elders back then when they flew to Texas to see about one of my great uncles who had cancer. When the shiny American aircraft landed or took off, their bare metal reflected the sun so that the planes made their own arrival / departure announcements! (Unless, of course, it was nightime or raining.)

The one big drawback to the new livery is the new logo, the diagonal blue & red slash with a white bird's head between the colors. While I'm sure that the people at American think that the bird's head is that of an eagle, to me it looks more like the head of a pigeon!
"Tough times never last. Tough people do." - Dr. Robert H. Schuller
Top

I actually like the new livery and don't like the old livery, no real explanation except that the old one is ugly IMO, also, I never liked any of WN's liveries.
Top

I don't hate it, and I don't disagree that AA was due for a change. But what they ultimately came up with is not the direction I would have gone in.

The current livery looks nice, though it does already look dated by about five years seeing as it's already out of date with the flat, simplified, and durable designs of today that are in many ways a renaissance of 1960s design.

Just look at another client of FutureBrand, the firm that designed AA's livery. They also redesigned UPS in 2003, ditching their 1960s logo. They came up with something that had a lot of gradients, bevels, and 3D effects. Now, UPS is already revising that version of the shield logo with one that is much flatter, and they've already redone their livery to match it.

Geminijets101 wrote:
I know this is old news but who still misses AA's older and much more recognizable livery?

I do, but I do like the current livery.

The first recorded reg# in my logbook was on N144AA: 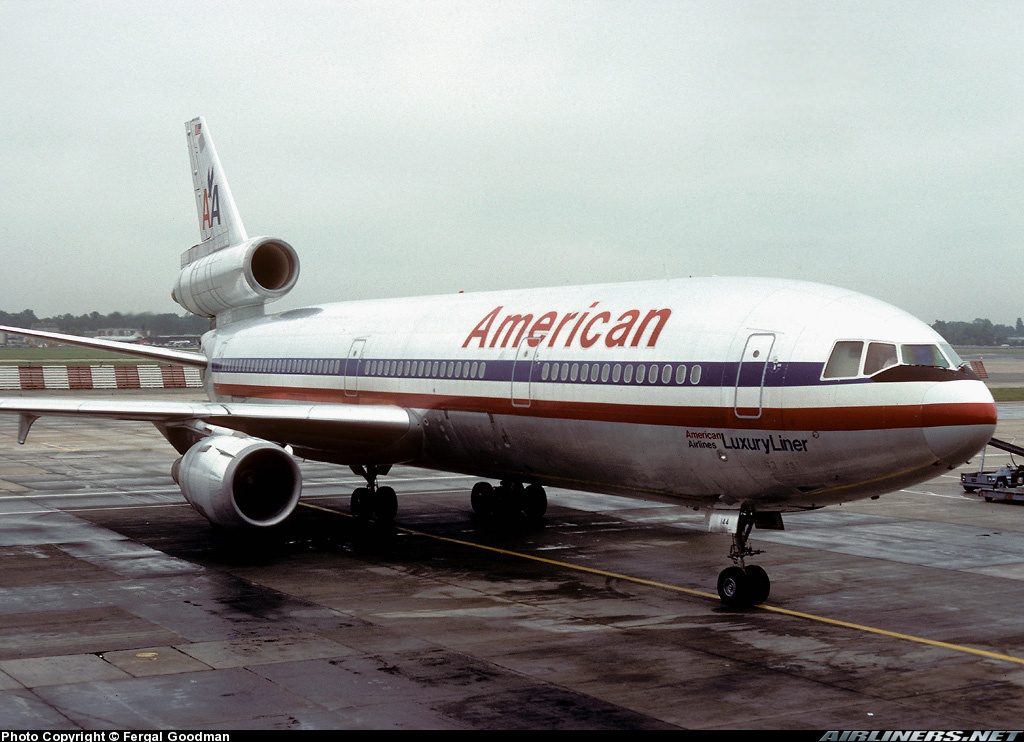 I am not a nostalgic man, I much prefer the new one. Even though I don't love it, it's above average. The old one was, well, old, obviously, and I tend to dislike cheatlines (a heresy for anet)
You killed a black astronaut, Cyril! That's like killing a unicorn!
Top
Post Reply