I was on an A300 flight the other day and it was pretty turbulent! It was just an hour flight, but the last 35 minutes were pretty turbulent. I was sitting in the last row (45C).
I saw and heard several people throwing up! It was disgusting...

Once we landed, many passengers were happy and I thought: lets see how many used sicksacks I can count while I am walking through the airplane. So, I left the airplane last and counted: 15 (!!!!) used sicksacks, being on the ground, seat and some people even missed the sicksack... It was gross.... Poor F/As and cleaning staff! Lot of work I guess....

Don't want to jinx myself, but in many years in the air -- only came close once and was holding the bag. . . .

Sometime in the 90's on a biz trip -- was flying from DFW to Killeen, TX on a DL ASA - EMB 110. It was a blazing hot Texas day and I had made the mistake of stopping with friends to have Tex-mex and margaritas on the way to the airport to hop back down to Killeen. Crystal clear, but horrible turbulence --- a roller coaster all the way. I had both air vents blasting on my face and clutched the airsick bag the whole way. Pale, clammy, sweating. . . I made it without using it, but just barely.
Top

Yeah a lot of people did the same! some were lucky keeping everything in, but others - well....

I felt sorry for them! it must've been horrible!!!! 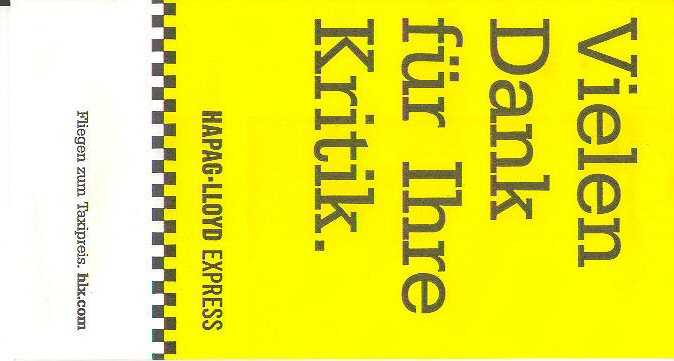 Thank you very much for your critique,

You should better keep that for yourself,

Yeah I can still remember them when I used to fly for them!

good ones!
But the LH ones were just blue...

Back then: Ever thought about how many of them have been used when you "slam dunked" the poor B737 onto the runway with 2G ?

And that wasnt the day where anybody threw up! Only during 2 approaches people were throwing up: VOR/ DME approach runway 12 into BIO! Jesus, it was so damn windy and turbulent! Horrible! And another approach: visual runway 22R into NCE! Hell of a ride!

I havent been to SPain too often in the 737, but during summer it was always pretty turbulent due to the heat and the unstable air then...

These "colleagues" are now with LH-Cargo, they only flew the 737 for a pretty short time, so maybe this was only a phenom during summer, who knows

After Monday and Tuesday even the calendar says WTF...
Top

Very heplful what Mr. Bean is doing there to calm the boy down

After Monday and Tuesday even the calendar says WTF...
Top

One of his best ever.

) and there must have been dozens of sick backs used as you could constantly hear people throwing up. After we passed by the turbulence and the storm I was on of the very few ones to eat.

80% of long haul flights I've taken in the past have resulted in myself chucking my guts. Finally I've found an airsickness med that works

Now I have no problem at all!

It is May 1991. The location is Canaima Camp in Venezuela (CAJ).
We are on a 2-week tour of Venezuela with flights on AVENSA's B727 every second day (but with up to 3 sectors a day), which was rounded-off with a one week stay on the beaches of Cumana.
Having flown in from Caracas-Maquetia around noon, we went onto a trip with a longboat in hot weather in the afternoon.
In the evening the rhum (ron) flows a bit too heavy, so there is a slight hangover the next morning.
Breakfast consists of solid food and some Orange Juice (the acronym OJ was not known to me back then).
All is fine - at least so one thinks, but trouble is brewing in form of a single-engined Cessna that is supposed to take us onto a sightseeing flight "to" (as it was advertised) Salto Angel, the world's highest waterfall - however, as the pilot undoubtedly must have been a fighter pilot in the Venezolanean Air Force in earlier life, the smooth ride evolves into a rollercoaster ride with twists & turns and positive & negative G-forces along and across the plateau of Auyan Tepui.
The remainder of the story better remains untold, but be assured that the appropriate lesson was learned by the poster ...

Thankfully there were some hours off after this incident before our flight out of Canaima to Ciudad Bolivar on a Servivensa DC-3, so I was able to enjoy my first ride in a DC-3. After disembarkation at CBL and a short stop at a hotel, we took a ride in a boat upstream on the river Orinocco before landing on a sandbank in the stream. A picknick is served there and alcoholic drinks are offered. Guess who is sticking to softdrinks ... ?!
-HT
Carpe diem ! Life is too short to waste your time ! Keep in mind, that today is the first day of the rest of your life !
Top

One time for me, last February on a LH flight FRA-DFW. But it wasn't turbulence. I attribute my sickness to food poisoning. I tried the salmon. Never again! Most of my mess ended up on my car's floorboard as the wife drove me home. I was sick two days!
Top

Well, pretty basic. Transatlantic flights, a bunch of turbulence, a kid walking to the galley (probably in search of a lav), gets stopped by an F/A who asks if she can help him. The boy then starts to throw up. Not a normal vomit, mind you, this is "Old Faithful"-style, head swinging left and right, puke going basically everywhere, including the F/A. I was staring in disbelief at the scene. When the boy was done, the F/A told him to hang on, she left the galley, back to the rear of the plane, and was replaced by two doting F/A, who were not in shock (or furious with the boy), and they take care of the boy, and start cleaning up best they can. Luckliy, the only smell (I was sitting two rows away from where the events unfolded) was from the puked-on F/A.

Cheers
Mats
Sure, we're concerned for our lives. Just not as concerned as saving 9 bucks on a roundtrip to Ft. Myers.
Top

That must've been horrible for the FA. I wonder if they have an extra uniform or some sort.
Top

Hopefully, yes. Still, I didn't see her for the remainder of the flight

Cheers
Mats
Sure, we're concerned for our lives. Just not as concerned as saving 9 bucks on a roundtrip to Ft. Myers.
Top
Post Reply