As a plot device, would it be possible to use a hollow shaft harpoon with fuel hose to spear a fuel tank on a large passenger plane in flight to add fuel?
Assume there is a coagulant foaming agent to seal any leaks around the harpoon and it disengages the hose with a cut off valve.

Part 2 question: What type of plane would this work on best and approximately how long should the harpoon be?

Much thanks to anyone with any plausible answer.
Top

The probe would have to be longer than that of an Air Force tanker. You create a leak issue after probe extraction and might pierce the lower wall of the tank.
The Harpoon must have a plate or other device on the shaft to prevent over-penitration and the tip would have to remain to fill the hole it created.

The best planes would be those with fuel systems that can easily spread the fuel one wing to the other (spearing the centerbody tank would certainly damage the wing box).

Issues are missing wing spars and ribs in the wing.

Air to Air refueling took decades to perfect. The valves, purge system, distance between aircraft, avoiding buffeting between aircraft (still present in some air to air refund, hence why for some aircraft, emergency only).

Good luck not leaking and starting a fire. Most likely, this will happen.

Lightsaber
Flu+Covid19 is bad. Consider a flu vaccine, if not for yourself, to protect someone you care about.
Top

lightsaber wrote:
Good luck not leaking and starting a fire. Most likely, this will happen.

Unless fuel drips onto something hot like an engine (which is pretty unlikely in flight but can happen after landing), you'll just leave a slightly annoying trail of fuel droplets in your wake.


Distance between aircraft should be in the order of one wingspan. More will create large aero forces on the harpoon/hose, less will lead to nasty aerodynamic interference.

The best place for unscheduled refueling would be either the overwing refueling port (since that's designed to let fuel in) or the horizontal stabiliser trim tank (for aircraft that have it). Wingtip tanks could also work for aircraft with very thin wings like the early Lear Jets. The fuel tanks in the wings are inside the main wing spar, so you could end up with catastrophic damage if you made a large enough hole in the wrong place.
Top

The “harpoon” would need to be 3”-4” in diameter in order to transfer any meaningful amount of fuel quickly. The hose would also need to be the same diameter.

As noted, the probe would have to be fairly long, and the hose, even longer.

Further, you’re not talking a garden hose here. The hose would need to be thick-walled and reinforced to handle the speed, buffeting and weight of fuel being transferred.

As for aircraft, you’d look for one that can move fuel from one tank to another, without going through cockpit control gymnastics. The MD11 does it as a matter-of-course. Not sure about later Boeing’s, but on the early ones, the crew can balance the fuel, but not transfer it.
When seconds count, the police are minutes away, or may not come at all.
It’s hard to win an argument with a smart person, but it’s damn near impossible to win an argument with a stupid person. ~B. Murray
Ego Bibere Capulus, Ut Aliis Sit Vivere
Top

It’s fiction, go for it !
The best contribution to safety is a competent Pilot.

If you want realism, you should explore the Air-to-Air refueling variant of the F-117 that's similar to the one used in Executive Decision. It was used to hook up to various aircraft and perform LO refueling similar to how the variant in the movie offloaded passengers.

Here's a shot of a boom operator going airborne during a mid-flight break up. 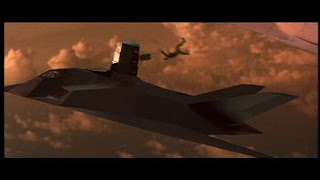