The smell of flying!

The smell of flying!

I do vividly recall the smell of jet fuel as a kid through the 1970’s and perhaps 1980’s. You could smell the jet fuel from the car as you drove into the airport (JFK for me) and even inside the terminal and aircraft when boarding. It would finally disappear after take off.

Today there is no fuel smell at all. How did that change? How did the engineers and petroleum or aircraft manufacturers get rid of the smell- as I fairly sure it was considered pollution?

The fuel is still smelly. You can smell it on the water check "puck".

I think it the decrease in smell level is due to a combination of two factors.
- Nowadays pretty much all airliners are pressure refuelled so you don't get much vapour escaping. In the past, many airliners might still have been using overwing refuelling, which is more like refuelling a car.
- Fuel spills are much more tightly regulated. 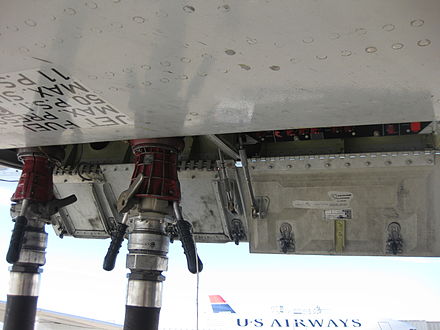 Last edited by Starlionblue on Sat Dec 12, 2020 7:52 am, edited 1 time in total.
"There are no stupid questions, but there are a lot of inquisitive idiots." - John Ringo
Top

I drove down the Perimeter Road past the FedEx ramp at IND the other day, and was reminded how much I love the smell of jet fuel in the morning. Maybe where you're at they've switched to that new organic, free-range jet fuel?
Top

Ahh, I love the smell of JET-A1 in the morning!
"Tell my wife I am trawling Atlantis - and I still have my hands on the wheel…"
Top

Never employ grandios verbiage when the utilisation of diminutive phraseology will suffice.
Top

As a boy in the 1950s my dad worked at Heathrow and i would often go with him to watch the aircraft . Now on the north side in those days, which handled long haul aircraft only, as soon as they got rid of baggage and passengers they would be towed off as space was short on the north side. Now every now and again the tow crew would say I could sit up in the aircraft while it was being towed across the airport and then give me a lift back. To this day I can still remember that unique smell inside these pro long haulers and I think it was a combination of, engine oil, hot electrics, cigarette smoke, and some strong liquor, pure heaven to aircraft mad boy of about 12 years old
Top

Yeah, I remember that smell of lore, me too…
"When I find out I was wrong, I change my mind. What do you do?" -attributed to John Maynard Keynes
Top

Quoting VC10er (Topic author), "Today there is no fuel smell at all. How did that change?"

If you remember in the "old days," 707s, DC-8s, early 727s, and other early generation jets taking off with plumes of black smoke trailing the aircraft and the smell of jet fuel pervading the aerodrome. Obviously, not the case any longer.

I think this was about the same time (mid to late 1970s) that we started to transition from leaded gasoline to unleaded gasoline in automobiles--environmental issues and improvements to air quality.

Regarding your question, "How did the engineers and petroleum or aircraft manufacturers get rid of the smell?

There is considerable information available on the internet that discusses improvements to jet engine combustion (fuel efficiency), hush-kit adaptation (noise reduction) and other enhancements.

Hi VC10er, were you referring to the smell of Jet fuel (kerosene), or the smell of the exhaust from the engines that were burning jet fuel at the airport?

As Starlionblue pointed out, there's probably less raw fuel fumes around these days for just the reasons he suggested, more careful handling of the fuel and less "overwing" refueling taking place. I also agree with him that the fuel is still very smelly, it smells exactly like diesel fuel if you've ever had any experience with that, it's more viscous than gasoline and the fumes linger on your hands/clothes longer (I'm an AME so I have plenty of exposure to Jet fuel both burned and un-burned).

If you're talking about exhaust fumes, there's less of that due to more efficient engines, and less ramp equipment using it as well as less use of the APU when parked at a stand. These days, electric GPU's are used extensively and gate-based air conditioning is very common.

To clarify about ramp equipment, I mean things like GPU's, and Air conditioning carts all of which used diesel fuel that produces exhaust fumes that smell almost identical to burning Jet fuel.

In the old days, Revere, MA on the east side of Logan smelled of jet exhaust to the horror of residents.
Top

Where does the vapor in the tanks go when the fuel gets pumped in from below? Is there any sort of vapor recovery system?
I am a patient boy ...
Top

Burning jet fuel and coffee....as your board your flight in the jetway...
Carpe Pices
Top

I'd imagine the wide range use of ground power vs APU reduce the exhaust emissions.
Top

GalaxyFlyer wrote:
In the old days, Revere, MA on the east side of Logan smelled of jet exhaust to the horror of residents.

True. And to be fair, Revere Beach on a weekend night had a lot of worse smells than jet fuel.
I am a patient boy ...
Top

Where does the vapor in the tanks go when the fuel gets pumped in from below? Is there any sort of vapor recovery system?

That's a very good question, there is no vapor recovery system (at least not on any aircraft that I've worked on), so I'm guessing the reason you don't smell it as much is it's coming out below the wings and quickly settles to the ground (fuel vapor is heavier than air). The NACA vents are always below the wings and let air out of the fuel tank when refueling and let air in when consuming. Also, whats coming out of the vents is mostly air, not fuel vapor.
Top

You can still smell it mildly at airports where the parking is close to the aircraft, like at LAX. Jet Fuel smells much better than 100LL, which I've had the displeasure of inhaling a few times when fueling my plane.
Mangeons les French fries, mais surtout pratiquons avec fierte le French kiss
Top

Yes, I wouldn't say its dissapeared....I live near Gatwick airport in the UK and you do get the odd whiff off jet fuel if the wind is right. You can even smell it when you get off the train nearby. Lovely smell.

Also you get a nose full if you happen to be on an aircraft in a taxi queue...gets right into the cabin, can be quite alarming for some passengers.

Even though aircraft engines are alot cleaner than they used to be, they are still firehosing the stuff into the engine....your always going to smell the exhaust...
Top

I still get to experience the jet fuel smell as a maintenance tech at the FedEx IND hangar. You can definitely tell when fuel panels are opened and the fuel leak crew is working, it's over-powering at times. Also, when we taxi a ship from the hangar to the flight line, you can stand at the hangar doors and get a blast of JP. You will definitely smell it all day long if you happen to get even one drop on you, it will last for quite a while and if you don't have a change of clothes, you will carry home in your vehicle.
Gregory
Top

I find a huge difference between the smell of jet fuel and the smell of jet exhaust. Single point refueling keeps the odors down to a minimum but when I walk past the wing fuel event It smells pretty rank. Don’t stand downwind. There’s no doubt the fuel is going into the tanks.

Now, the smell of jet exhaust?...I like that smell. Sort of a sweet smell compared to the smell of raw fuel.
Top

Smells much like diesel fuel burning which a college instructor of mine used to call "the breath of life". I like that smell as well, although my wife doesn't. She tells me that she can tell when I've been around running airplane engines because she can smell it on me. The CRJ apu is one of the best places to get blasted by jet fuel exhaust, and it warms you up in the winter, just don't get too close and wear hearing protection, that thing is loud!!
Top
Post Reply