This picture shows a thrust reverser of a 737

In a nut shell
How does it work?
Are there any more pictures?
Thanks
Mark

On this particular engine (JT8D), when the pilot applies reverse thrust, so called "clamshell" doors that form the rearmost section of the engine cowling actually pivot up on top and down on bottom (they open sort of like a clam's shell would, hence the name). During flight, the doors are closed, allowing exhaust from the engine to flow straight out the rear. When deployed, the doors deflect the exhaust up/down and slightly forward. On more modern engines, (such as the CFM56 used on 737 models from the -300 and later) much of the air flowing through the engine is ducted through "cascade vanes" out of the side of the engine. In this case, part of the engine cowling slides rearward, allowing air flowing from the cascade vanes to flow to the sides and slightly forward).

Hope this helps a little.
Every flight counts.
Top

That does help but are the any other pics if this happening because i couldnt find any?
Top

http://www.flightlevel350.com/video_streaming.php?id=254
NO URLS in signature
Top

Good LINK
regds
MEL
I may not win often, but I damn well never lose!!!

Just an issue of names really, but aren't 'Clamshell' reversers those ones with semi-hemispherical 'eye lids' that close together, but totally enclosed in an engine tail pipe - like BAC 1-11's and some (not all) 727's. Concorde also has them - but external and visible.

I've heard the above 737-100/200 reversers called 'Target' type reversers as they have articulated blocker doors that swing out, back then together.
...I watched c-beams glitter in the dark by the Tanhauser Gate....
Top

Thanks for the pictures MEL.

Presumably - not visible, there's some internal blocker doors (the semi-hemispherical 'eye lids' I talk about, above) that block off the gas flow in the tail pipe, because as the external doors which open in that picture don't actually block the tail pipe but just form a forward deflecting 'nozzle' ?
...I watched c-beams glitter in the dark by the Tanhauser Gate....
Top

Can't find an Inside view of the Blocker doors.
regds
MEL 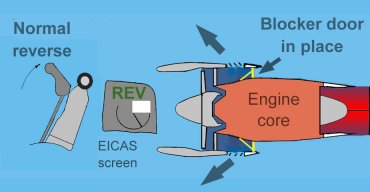 here is another conversation in general about reverse thrust if you are interested:
Reverse Thrust: How Often? (by HighFlyer9790 Mar 31 2006 in Tech Ops)

It should also be noted that on the cascade-style reversers (as found on the 777) and the petal-type (dunno if that's the correct name - I mean the ones on the A340), only the bypass air is reversed. Core air still goes out the exhaust.

~Vik
I'm watching Jeopardy. The category is worst Madonna songs. "This one from 1987 is terrible".
Top

The Actuators are on ither sides connected to the T/Rs by Two Links each.
regds
MEL
I may not win often, but I damn well never lose!!!

So many misconceptions exist about reverse thrust.

Net propulsion is calculated based on the sum of the mass, pressure, temperature, and direction of all the air and other matter entering and exiting the engine. The engine means everything attached to the engine, including external reverser doors -- everything that touches the mass of air going by. For calculations' sake, thermodynamicists (the lucky guys who study jet engines) just draw a circle around the exterior of the engine, and then draw little arrows to show the air going in and out of it. That's called a mass-flow diagram.

The fuel added to the air as it's going through weighs so little compared to the enormous volume of air, it's pretty much negligible. So, for simplicity, the mass of air entering the engine is equal to the mass of air exiting the engine. So the propulsion is just generated by increasing the entropy of the air. In its simplest form, entropy is defined as randomness. Thermodynamicists think of entropy as "energy that can do work." The cool, still air that enters the front of the nacelle has relatively very low entropy, and the extremely hot, high-velocity air coming out the back has relatively very high entropy. On the mass-flow diagram above, you'd draw a short, thin arrow going into the engine, and a much longer, thicker arrow coming out the back. Even at idle, the arrow coming out the back is longer, so the engine is producing thrust.

Now, close the reverser doors. The thick, dark arrow doesn't point straight back anymore. It doesn't point straight forward, either. It only has to point at an angle so its forward component is equal to the length of the arrow pointing in the front of the engine. That cancels out any thrust the engine is generating in the direction of the airplane's travel. Any further angling forward of the thrust vector will generate positive forward thrust, very effectively slowing down the airplane. Even with the engines at idle, some forward thrust is created, and all residual rearward thrust is cancelled, so this can be effective (and quiet). It has the benefit of doing all the complicated moving of reverser parts, so if more reverse thrust is suddenly needed to make a closer-in taxiway, you just have to wait for the engines to spool and not for all the mechanical parts to move again.

The moral of the story, as best as I can possibly explain it, is that thrust reversers do not require the thrust to point directly forward to be very effective. The difference in entropy between the front and back of the engine is so great that the forward angle only has to be a few degrees more than perpendicular.

Now, if someone can please explain to me the eternal fascination with reverse thrust, I'll be very happy!
Position and hold
Top

It's a moving thingy-bit that's diff'rent on diff'rent plane types

QED
...I watched c-beams glitter in the dark by the Tanhauser Gate....
Top

Okay, say 10 degrees past perpendicular. How would that compare with turning the air all the way thru 180 degrees?
Top

Are you being serious? There are so many variables between engines, and even doing the computation for a single engine type under one set of conditions would be a ton of work. It's clearly going to be less effective. The point is, it's effective enough, without having the additional weight and complexity of turning the air around 180 degrees. There is no need to develop the full thrust available for takeoff for reversing.
Position and hold
Top

I can't guarantee i'll make you "happy" with my explaination, but here goes:

Landing is exciting, and the big rumble of reverse thrust, combined with the sudden deceleration upon touchdown (which isn't actually caused by reverse thrust) brings all sorts of curiosities to the minds of those interested in aviation while not actualy a part of it.

By the way, I think Timz has an honest question, that, while obvious to someone who knows that no reverser redirects thurst 180 degrees, might be less obvious to someone (like myself) who's curious about the relative effectiveness of various types of reversers.
Dassault Mercure: the plane that has Boeing and Airbus shaking in their boots.
Top

I guess the Noise accompanied by Rapid Deceleration generates the Interest.
regds
MEL
I may not win often, but I damn well never lose!!!