Vee's, Radials, And Recips In General

Vee's, Radials, And Recips In General

I donno why, but I was on a piston engine kick tonight, and spent too much of my free time researching various WWII engines online. The questions began to mount.

Messerschmidt's ME-109 was particularly interesting. I was reminded of its inverted V12, and wondered if an inverted engine suffers power losses because its power stroke must work against gravity. My armchair engineer imagination tells me that working against gravity on a power stroke is no less costly to overall power than doing the same on a down stroke in a right-side-up engine, to say nothing of the tiny impact gravity might have on the powerful power stroke of an inverted 1500+ engine. After all, some WWII submarine diesels were inverted for some reason, and those things were slow revving and must have had very heavy pistons and rods. But perhaps some of the REAL engineers here can confirm my imagination.

Radial engines have always puzzled me with their seeming complexity. What is the advantage of having, say, 9 cylinders arranged in such away as to have essentially 9 separate banks, thus requiring and equal number of separate valve train and lubricating components? I suppose compact packaging is a major plus, and even necessary with engines over 12 cylinders. And i suppose it would also be impossible to air-cool a many-cylinder V engine.

But still, I'm curious about the inherent advantages and disadvantages of V and Radial designs. Are their any unique solutions to either that have been employed in little-known recip engineering experiments? Thanks for your replies.

Surely the entire crankshaft & piston assemblies are balanced - so the issue of gravity acting doesn't arise?
...I watched c-beams glitter in the dark by the Tanhauser Gate....
Top

Hi Speedracer, Buzz here. A V-banked engine can be air cooled, take a look at the Flying Heritage Collection's Fieseler-Storch. She's an inverted, air cooled V-8.
There's an interesting web site, Aircraft Engine Historical Society and an interesting book "Allied aircraft engines of WW2" that you might enjoy. It's got a lot of the background to aircraft engine engineering - solving the problems.
g'day
Buzz Fuselsausage: Line Mechanic by night, DC-3 Crew Chief by choice, taildragger pilot for fun
Top

As far as I have read in various publications, the inverted V came into being to improve forward visibility, both on the ground and in the air - since by this token, the bulk of the engine would be lower, not blocking the forward view. In the end, as far as the Bf.109 is concerned, the material I've read stated that there were no major practical differences in the end, but since the production lines were geared to inverted Vs, they continued to be produced.

The V engine in general was used since it gave more power per frontal area than a radial, but it's disadvantage was the added system of water (or otherwise) cooling, which was vulnerable to attack (indeed, the only way to bring down the Ilyushin Il-2 was to target its prominent oil cooler).
Hawkeye: "It doesn't make any sense."
Radar: "Well, none of it makes any sense. You just have to send in the right number of forms." - MASH 4077
Top

The valve train for a radial is wonderfully simple. The cam is typically a drum, rather than a shaft, and rotates concentric with the crankshaft forward of the cylinders. There is one track of intake lobes and one track of exhaust lobes. The number of lobes is not equal to the number of valves, but rather, the speed of rotation is matched by geartrain to open any given valve at the correct point in that cylinder's cycle. Timing is apparently done to the entire drum at one time.

From the cam, it is a simple pushrod and rocker arm to the valve stem just like any OHV engine.

Lubrication is often routed externally (most of the oil winds up on the outside anyway!) You can see external oil plumbing around the banks.

Firing order is simple too. For a single-row of nine it would be:
1-3-5-7-9-2-4-6-8
What's simple about that? It is just every other cylinder all the way around twice. That is why each row has an odd number of cylinders.

About the only thing that is somewhat complicated is the crankcase castings with their internal oil passages and so forth. But these are normally cast in halves and bolted together during engine build so even they are not as bad as they look at a glance. The accessory section appears to be rather complex but it is not much different from other engine layouts. Just gear trains.

One advantage is the ability to change out one cylinder at a time, on the wing. Another is cooling air flow is pretty clean.
Happiness is not seeing another trite Ste. Maarten photo all week long.
Top 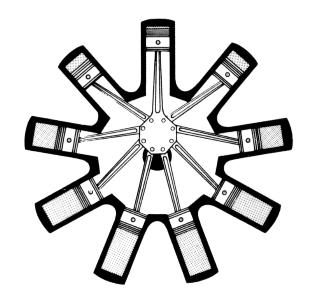 The most intriguing engine by far I've ever seen is the one used in the B36, the Pratt & Whitney R-4360. It is a mix between a radial and an inline engine I guess you could say, with the cylinders in a corkscrew shape. There is one on display at the Pima air museum at TUS. It is "disected" , and you can press a button and everything starts moving. 28 cylinders, 4300 hp. A really impressive engineering masterpiece

The 'corkscrew' shape is for adequate cooling.
'Tis called, cylinder offset, and is very necessary.

Yeah, the rear row runs quite warm, at least on the Stratocruiser that I flew long ago.

On the photo of the R4360, you can just see the supercharger (blower) just forward of the pressure carburetor.

What you cannot see are the two General Electric turbosuperchargers fitted with this engine installation.
Quite massive these.

Don't forget the Ranger 12V770....air cooled as well.
If you believe in coincidence, you haven't looked close enough-Joe Leaphorn
Top

Remids me one time I was at the air show in K'zoo and Miss Budweiser was there. One of the crew was refilling the oil tank on number 3 with a 5 gallon tin (gluck*gluck*gluck*) so I asked him how much they used and he said "Well they prestage the stuff at every place we're supposed to be and I'm getting worried because we've only got 200 gallons here."

If you dig really big motors


If you believe in coincidence, you haven't looked close enough-Joe Leaphorn
Top

That guy in the white jumpsuit and goggles is a total badass.

Do inverted Vee's (and inlines, like the Ranger?) suffer the same maladies as the lower cylinders on big radials, where you need to walk the prop before starting to prevent potential hydraulic lock from oil leaking past the rings and into the cylinder?

Something I've always been curious about,

Yep! Getting ready to put the mid-sized engine in my weedwhacker.

I saw that engine at Silver Hills a couple of years ago. It is very impressive!
Happiness is not seeing another trite Ste. Maarten photo all week long.
Top

Well, the engine is anyways.

I'd be inclined to think that the prudent and cautious operator would walk the prop through a couple times for that very reason if it was sitting somehwere for more than four hours. I've worked on a couple Rangers and I liked them...

Musta kept the crews busy on the Bf109s.

Now.....the most outrageous piston engine of all time musta been the Napier Sabre.

this guy's got some good information about the Sabre and the Hawker Typhoon. Just my friggin' luck I was born forty years too late.