While watching "Airport 1975" I noticed the movie takes place at IAD. In boarding the 747, they used what I assume are mobile jet bridges. It looked like a very lengthy boarding process since it seemed each one only held maybe 60-80 pax. Was this a normal process at most airports? Were jetways not installed yet except for major airports then?
"But this airplane has 4 engines, it's an entirely different kind of flying! Altogether"
Top


Don't forget that in 1975 the B747 was still a relatively new aircraft and didn't fly to that many airports. Usual passenger requirements were probably half that for a B747 so the mobile bridges made sense.

Also, jetways are a major infrastructure investment, both in time and money.

LGA probably introduced them in the early 1960s. JFK had some around the same time on IAB TWA terminal, in the background The mobile transfer lounge was a novel idea adopted from the outset at Dulles. Instead of very long concourses, then the norm at major airports, the terminal would only have ticket counters, baggage claim area, and one large lounge area. Instead of long concourses and gates designed for one or two type of airliners, the planes would be parked and serviced in large open areas and passengers transferred tot he main building using the mobile lounges.

The concept didn't prove as efficient as originally thought. IAD today has several concourses, many departure lounges and conventional jet bridges. However, they still find use for the mobile lounges even if just to transfer people around the airport.

The use of mobile stairs to load and unload passengers who will walk across the ramp to the aircraft is now somewhat rare. Jet bridges were introduced in the early '60s at places such as LAX, SFO and JFK.

Just last week, I was on a BA flight departing EDI. They use a jet bridge for the passengers in the front half of the plane while those assigned seats in the rear must go downstairs, walk out on the ramp, and board through the rear door after climbing mobile stairs.
Top


Te same concept was used at YMX (Mirabel, QC, Canada) from the onset. The airport served mostly international flights with a good deal of widebodies back in the '70s and '80s. I think some if not most of Mirabel's people movers ended up in IAD.
"For radar identification throw your jumpseat rider out the window."
Top

In 2001 I had visited Hochiminh City, Vietnam for a month vacation. On arrival, I was bussed to the terminal. On departure, we left via air bridge. For some airports, it takes a while to catch up to the rest of the world.

And yes, I did go on one of those mobile transfer vehicle once (sometimes between 1995 and 2005). I could not recall which airport though

MEX used to still have mobile lounges not long ago, I used to ride them frequently. Mainly used when the planes had to use remote parking stands in a busy day. Nowadays with the demise of Mexicana and an overall reduction in traffic I don't think they're used as frequently. 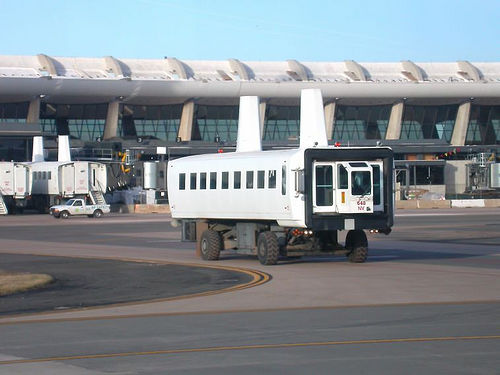 Dulles transitioned to a gate-driven infrastructure and began using the lounges to transport people between concourses. With the new train, the number of mobile lounges doing transport duty has decreased. Nonetheless, you can still see them working at IAD every day. Several airports have one or two mobile lounges to service special needs aircraft, charters, and the like. BWI, for instance, had two mobile lounges used mainly on a DC-8 combi that came in regularly. With pax seats in the back and a cargo compartment up front, it wasn't suitable for a traditional jet bridge, but the mobile lounges were seen as being much better than traditional airstairs from a passenger comfort, efficiency, security, and safety standpoint.
CFI--Certfied Freakin Idiot
Top

I can remember boarding flights via mobile airstairs at ELP through the early 1980's...that's when all of the gates became jet bridges.

About two years ago, I flew on AK from PEN to KUL (and back). They board their A320's with mobile airstairs-both front and rear (i.e. two airstairs per plane). This is to avoid paying extra fees that are assessed in Malaysia for jetway usage...
Celebrating the birth of KELPkidJR on August 5, 2009 :-)
Top


They're going away with the introduction of the train system. The only place you can usually take them from is the concourse to the D terminal. Everything else is via train now.

Sad because the history of the airport is dissapearing. Nice because riding one of those things in 90 degree heat without A/C wasn't fun.
DMI
Top


The lounges used to park at the main terminal at the base of the large windows facing airside.


The planes were parked where the current concourses C/D are located today. There used to be ramp offices where the concourses are today. Planes parked on the north side of the offices faced eastbound and those on the south side faced westbound.


Here is a couple pictures of the original mobile lounge. One end was literally driven into the terminal building and the other end had planks which were movable to reach the door of the airplane.

In the early 1990's these mobile lounges were converted so either end could be driven into the building. The planks were removed. These were used as the "people movers" between the main terminal building and the concourses. You could cram almost 200 people in one of these.

IIRC they were also using the plane mates at that time to board planes. The entire lounge would move up and down and be driven between the terminal and the plane. These had more seats than the mobile lounges and you could get about a hundred people in one.

Fly2HMO has a picture of the same type of mobile lounge in the lowered/driving position.

The boarding process took a while when boarding directly from a lounge. It is impossible to board by row number or zones so everyone is tripping over each other getting to their seats. Also, if the flight required more than one lounge, it was very possible you had a seat in the front of the plane and the lounge docks to the back door while people sitting in the back are on a mobile lounge which has docked at the forward door. This creates head-on traffic in the aisle.


The temperature in one of those things was very hot or very cold. These was no in-between.
Top

i got to use a mobile lounge to board a delta flight this summer- at JFK T3
i believe august 18, 7pm flight to BOS. the plane was parked out in the remote stands and it took 2 busses to fill up an almost full 738
Top

Yes, I used these in the 80s when going into and out of IAD (although I did enjoy one on the nose-in from in front of the terminal, and saw the Powerbacks

)
Let's just say, it wasn't one of the easiest ways of getting on and off the aircraft... logistically.
Plus after a long flight, trying to convince people that need to cram yourself with 99 other people in this thing, wasn't exactly fun.


Another problem is safety, especially during de-boarding, when 1 mobile lounge pulls away, before another come comes in. If no jetbridges then stairs for me thank you!

Even jetbridges can take longer for narrowbodies... a jetbridge + stairs combo or 2 stairs can do the job MUCH FASTER. For widebodies, 2 jetbriges vs 2-4 stairs becomes a bus availability issue!

PHKO/KOA still uses old-school stairs exclusively. Everyone walks down the steps and across the ramp into the terminal.

With 777 and/or 747 service daily it's the only airport in the world still doing this with the widebody types I've been told.
Top

Any Interior pictures of this Vehicle?
regds
MEL.
I may not win often, but I damn well never lose!!!

In 2005, I was on one of those mobile lounges to board a CRJ of Independence Air (when it was still in business) at IAD. I thought it was a big waste of time.

LGB still uses "turboways" or "airstairs" to enplane/deplane aircraft. Our terminal is level with the ramp and PAX walk up to board the aircraft. Unless it is raining, this is my preferred method of boarding.
Top
Post Reply