In cruise on Jets we typically have pitch of approx 2/3 degrees nose up. Can someone just clarify that this is indeed the AoA of the wings? and at this pitch attitude is the body angle of the aircraft exactly level? If obviously the wing AoA is most efficient at this pitch why not just alter the Angle of Incidence between the body and wing i.e. rotate the wing pitch up in relation to the body. Is this related at all to the nose down pitch of the A330 when it is on the ground and that the cargo one had to be altered?

Many Thanks
Steve
Top


Because the fuselage also produces lift I guess. So if you made the angle of incidence zero you'd be flying even more pitch up.


The nose pitch down on the (pax) A330 is purely related to the length of the nose gear. Shorter nose gear means less weight. It has nothing to do with flight. The cargo A330 has an extended nose gear in order to make loading easier/practical with a level deck.
"There are no stupid questions, but there are a lot of inquisitive idiots." - John Ringo
Top


Yes, but it is the effective AoA of the wing. Taking wing twist (geometric and aerodynamic) into consideration, the AoA may vary between the root and tip.


There are other considerations, like landing gear length and takeoff performance that need to be balanced against having a flat pitch angle in cruise. Furthermore, the most efficient AoA to fly at, and therefore pitch angle, required for level flight can change based on the weight of the plane. You might have a nice flat floor at the beginning of the flight, but by the time you've burned off a lot of fuel, you are now flying at a negative pitch angle.
Why do Aerospace Engineering students have to turn things in on time?
Top

Most aircraft have a marked pitch down on the ground in order to keep the wing at the zero-lift angle of attack, minimizing the amount of induced drag, during the take-off roll. This way, the wing only starts generating lift (and induced drag) when the aircraft rotates.

Cheers,
Fred
I thought I was doing good trying to avoid those airport hotels... and look at me now.
Top


Just a slight nitpick: Most tricycle gear aircraft have a marked pitch down on sitting the ground. Conventional gear (taildraggers, for the laymen) on the other hand, due to their design, will always have a positive AoA while sitting on the ground.
Two all beef patties, special sauce, lettuce, cheese, pickles, onions on a sesame seed bun.
Top


To answer your question as I read it:

No, the pitch angle during cruise is not the AOA (they COULD be equal at times, but they are still different variables). Unless your airplane has an AOA display in the cockpit, you really won't know what the current AOA is. What you will know is the deck angle of the airplane. I think that's what you're referring to as being 2/3 degrees (by the way, is that 0.666, or 2 or 3 degrees?).


The airplane might be most efficient at this deck angle. It will probably be close to your L/D_max (where the ratio of lift to drag is maximum). This involves more than just the AOA; you have to take into account all the sources of drag, including friction, induced, and Mach, and all the sources of lift. The fuselage can contribute a not-insignificant amount of lift as Starlionblue said, so that could be one reason.


You basically said it, but may as well mention that it's also useful on landing, so that when you de-rotate (is that the right term?) you reduce the lift generated by the wings substantially, and therefore put more weight on the wheels. More weight on wheels = increased braking ability.


Now I'm waiting for 2H4 to come up with a photo of a taildragger with a nose-down pitch angle on the ground!


A nose-down deck angle on a taildragger shouldn't be hard for him to find, but I'm sure it would look look quite funny in the air. Also, most likely, it'll be of Russian persuasion. Of course, knowing how good 2H4 at these things, he'll find a pic.

However, it was AoA I was talking about.

Even on my glider, which is a taildragger, the canopy line sits level on the ground, and the AoA is up at around 10 degrees. In the air, it has a pronounced negative deck angle in the cockpit while flying "level", and the AoA is only a degree or two negative (due to its nature as a glider.)

This is best pic I could find to show what I'm talking about, but it's showing a climb, and not level flight. : 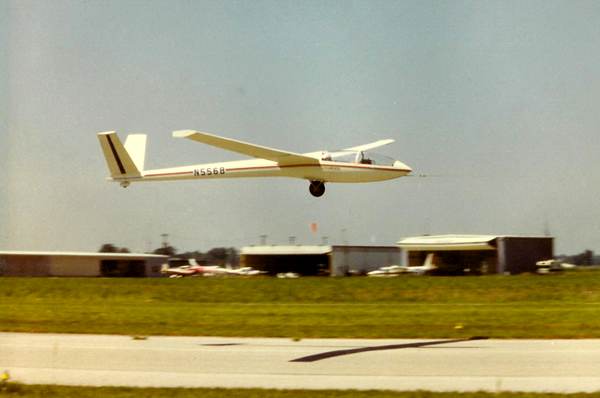 
Yeah, you're right. I'm still having my coffee today. Anyhow, yeah, the wing has a slight negative pitch angle, but the AoA is still positive compared to the path of flight. Of course, this is a super-critical airfoil, so that has something to do with it as well.
Two all beef patties, special sauce, lettuce, cheese, pickles, onions on a sesame seed bun.
Top

Learjet adjusted the cant of the tip tank to avoid excessive drag during cruise.


Since cruise mach is usually the constraint, weight varies, and incidence angle is fixed, there will only be one altitude for a given weight and speed that gives you an exactly level deck (zero pitch). For other reasons, you don't want the fuselage dead level anyway, so the whole thing is a careful balancing act to give the overall best performance for the range of flight conditions the airplane will see.