I just saw this photo on the Top 5 and wanted to know, what's that tin thing in the lower back part of the fuselage, like a tail wheel. I know it is not a tail wheel but something related to tailstrike. It's a tail skid. It protects the tail in case it should touch the ground during take-off or landing. Better for the skid to sacrifice itself than for the tail to hit. It's just a little peg with a hydraulic (I guess) actuator. 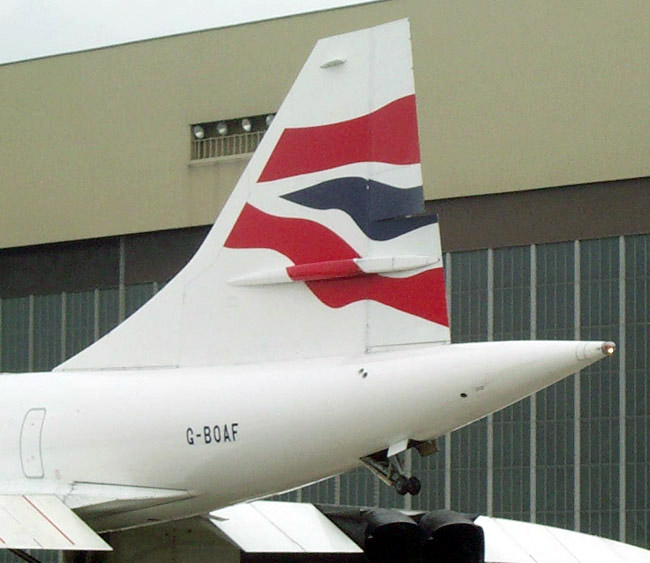 
Well, this is the first time I see that -tail skid- in a plane instead of a Concorde. Is it common for it to be dropped? I mean, do is it always dropped? Or is it automatically dropped according to plane's weight and any other variables (IE: Rwy Length, temperature, etc)?


AFAIK it comes down with the gear but I'm not really sure.
"There are no stupid questions, but there are a lot of inquisitive idiots." - John Ringo
Top

The recent LoT gear up landing utilized it well.


Yes it does. During other phases of flight you don't need it.

The 757-300 and CRJ-900 have tail skids as well. On all of the 737NG series (not sure about the 600 though... and maybe someone can clarify about classics) they have a skid kinda thing but looks more like a hump, and it's fixed (does not extend/retract).

The Tristar had a retractable tail skid. As usual on the Tristar a clever device that extended using hydraulic power and then used the same fluid as an oleo device. It was meant to cushion the impact. But I have only seen one contact, and it nearly ripped the whole strut off the fuselage.
Top


727 tailskid visible in these photos.

As I recall some of the 707's were fixed and did not retract.. and at one point the skid surface was oak... that didn't last long (no pun intended)
Top

The 707's were not tailskids in case there should be a tail strike. They were "ventral fins" for aerodynamic purposes. To my knowledge, no 707s had tailskids.


-100's are electric and the -200's are hydraulic. It's a fairly big fuel hit if it gets stuck out for cruise, 10% increase in burn comes to mind.
Too lazy to work, too scared to steal!
Top 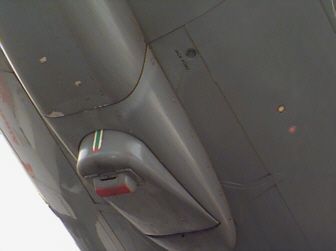 The SFP (short field peformance) 800 and 900ER's skid extends due to the increase angle at which the aircraft approachs, rotates, and flairs due to its lower approach speed. 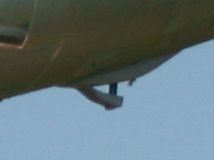 ATCT
Trikes are for kids!
Top

The 727 skid had a one-time crush material inside the strut to absorb the energy of the strike. It appeared to be something very like tightly rolled cardboard, lacquered to a very rigid state. I have seen one of these that was compressed less than half an inch in a tailstrike. The remaining energy transferred up to the attach point and did damage to the aircraft structure almost equalling the value of the plane. Some complex sheet metal bits had to be drilled out and replaced, in some cases new ones fabricated because the plane is out of production.
Happiness is not seeing another trite Ste. Maarten photo all week long.
Top


None of the -800 SPF equipt planes at my airline have the two position tail skid. It may be a option or a very recent running change.
Top

It is, (or at the very least was) an option. Two position skids are more expensive and slightly heavier.
The light at the end of tunnel turned out to be a lighted sing saying NO EXIT
Top

The 707's were not tailskids in case there should be a tail strike. They were "ventral fins" for aerodynamic purposes. To my knowledge, no 707s had tailskids.

I thought that the ventral fin was introduced on the B707 -400 at the request of the British CAA who thought it was lacking in fin area, and so Boeing built the B707-300 with a larger fin area to overcome the need for this ventral fin

Could be wrong though

As mentioned, the 737NG tailskid contains a crushable cartridge which is meant to absorb the force so it does not (or does minimal) damage to the structural integrity of the aircraft. In the photo above you can see a green/red sticker. When the green part is visible, the tailskid is serviceable. When only red is visible it requires repair/replacement of the crush cartridge. For some reason, the green part is much larger than the red which is the opposite of the ones I have seen in person.

Anyone know how they change the "tail-wheel" on the Concorde? Is it small enough to replace by hand (like a wheelbarrow wheel)?
If you flew today, thank a Flight Dispatcher!
Top


I didnt know we had SFP -800's, learn something new everyday.

ATCT
Trikes are for kids!
Top

Thanks for all your responses. Now I'm wondering, if most of Boeing aircraft have the tail skid, what about Airbus. Which models have it, if they have it.
JDM's
Top

The picture above is of a 737-400. The apu firebottle overtemp/pressure and discharge indicators are the giveaway. Your right, the NG's have much less of a green area.
Top


During an off board walk with a pilot below a 767, he explained me it was tied to the frame and not only externally for better shock forces distribution over the airframe instead than on the external panels. That did make sense.
Top


You are completely correct, the CAA were not happy with the Dutch Roll characteristics of the B707 and insisted on a fix for certification, initially this was achieved with a Ventral fin for versions sold in the UK.


Later, this problem was addressed with a taller fin and the ventral mod was not necessary.
The best contribution to safety is a competent Pilot.


Thanks for the Clarification Viscount, I got that a bit mixed up !
The best contribution to safety is a competent Pilot.