Considering these a/c are being used only by the manufacturer are they designated experimental or do they go through the full rigors of the certification process required for commercial use ?
Top

Neither are experimental. The 747LCFs have considerable use restrictions in their certifications (only Boeing airplane parts, basically), because of the lack of a cargo fire suppression system. The Belugas do get used for non-Airbus stuff.
Top

I imagine they only operate when not required for their primary mission.
Top


slightly off Topic, but are we going to see an A346 ´Moby Dick'?? Any News on the proposals??
some you lose, others you can´t win!
Top


and here i was hoping for a double sized A380

The Boeing 747 LCF's are only certified to carry 787 parts and nothing else.
Top


Indeed, here some examples of freight carried by the beluga: The Belugas are to my knowledge not fully certified.
They require some sort of special allowance to land somewhere.
The possible successor is based on the A330-200, apparently due to the tough take-off requirements at Broughton.
From a structural standpoint, passengers are the worst possible payload. [Michael Chun-Yung Niu]
Top

I know looks does not matter when carry cargos or when designed for specific roles but the Belugas must be ugliest thing flying now, more so than the Super Guppy or the Dreamlifter. I hope the version 2 Beluga, based on the A332, looks better.
Top


I hope that there is a typo here somewhere. The dreamlifter looks much more 'industrial revolution' and less graceful than the beluga. It reminds me of a python that has swallowed a pig.

I believe that the beluga is 'experimental' and needs new certif paperwork for each new cargo configuration.
Top


I don't think anybody has ever used the words "graceful" and "Beluga" in the same sentence before. Even the Beluga's mother wouldn't call that thing more graceful than anything.
Anon
Top

Did i read "Graceful"? Huh...ehmm not really! Both planes look "functional" & nothing else.

Btw, is the Beluga based on the A300 or A320? They look underpowered judging by the pictures above but that could be an optical illusion!
Top


Please correct me if I'm wrong, but I thought the current runway at Broughton was A330-200 limiting, but I believe there is some runway extension underway at Broughton at the moment which might provide enough room for a A330-300 based aircraft??


Are we sure about this? a recent thread here that I cant find again now clearly showed conceptional drawings based upon a 346, so 4 engined (anyone rember the thread in question)??
some you lose, others you can´t win!
Top

SA7700
When you are doing stuff that nobody has done before, there is no manual – Kevin McCloud (Grand Designs)
Top


They are certified, restricted. Not sure why they would need special permission to land, it is not that heavy normally. they parts a bulky, low density.


The way to fix that is to derate the takeoff.


That concept is somewhat old, the newer concept is A330 based, however I think that also assumed manufacturing in the US would not require parts to be flown.

The Beluga and Dreamlifter carry large bulky cargo. They do not carry heavy cargo.

The Beluga is quite a bit lighter empty than the A300-600 series freighter - but it's MTOW is still near 70,000 lbs lighter than the commercial version.

The extra body shape takes a huge toll on fuel efficiency. The Dreamlifter range is barely over half the range of the B747-400. The Beluga range is not listed but is definitely much less than the regular aircraft.
Not all who wander are lost.
Top


The heritage of a A300 can be seen clearly from this scheme. 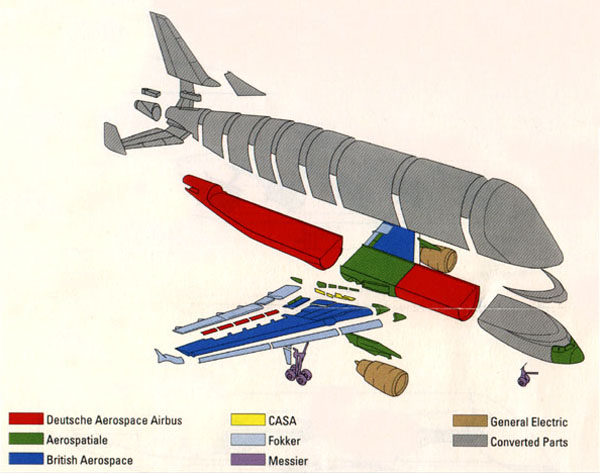 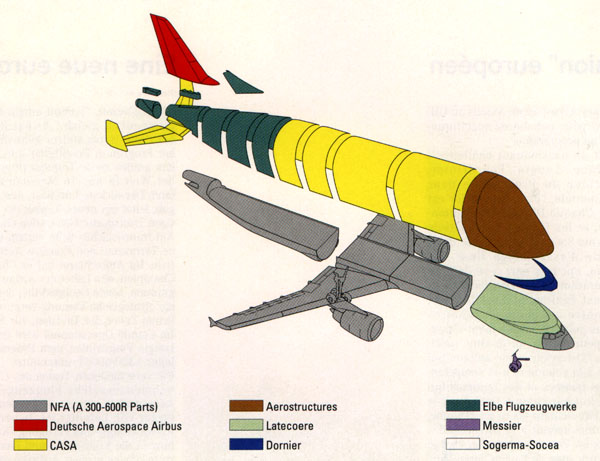 I imagine the A330 based Beluga would be made by the same companies.


Thanks to all of you

Very interesting! I didn't knew all that stuff about the Beluga! That's exactly the reason I'm here on A-net! Learning everyday new things about aviation.
Top


The A340-300ST and A340-600ST Super Transporter concepts date back to the mid-2000s and were commissioned by SATIC, the Aerospatiale/DASA joint venture responsible for the design and construction of the A300-600ST.

In August 2011, Airbus inadvertently posted pictures of a Super Transporter based on the A330-300 on their website. They formally denied such a program was in development, however it did seem the most likely option to replace the A300-600ST fleet and Airbus created a PowerPoint for a New Beluga based on the A330-300ST in 2012.

I saw the dream lifter at Oshkosh a few years ago. Up close it is UGLY, more rivets than a WWII battleship. I don't even want to think about the parasitic drag. This image gives a good idea of what I am talking about: https://www.airliners.net/photo/Boein...47-409(LCF)-Dreamlifter/1471515/M/
Opinions are my own and do not reflect an endorsement or position of my employer.
Top


According the TCDS in the reply above this one, "Only cargo that supports Boeing corporate lines of business is
allowed for carriage," so couldn't it be used to transport items for other Boeing projects?

Also, I see the Dreamlifter here at JFK all the time, often for a couple of days at a time, so I assume it's not simply a refueling stop. Any reason for the frequent visits? Maybe picking up cargo that is coming into the area via ship?
Top


Indeed the A300-600ST fleet is certificated. And they don't need special permission to land.
The TC is actually handled by Airbus Transport International, which gives flexibility for modifications that may be required for specific operations.

The "new" Beluga will actually be a closer to an A330-250.
This is to correct a CG issue, the A300-600ST often has a forward CG condition that requires 1 or 2x 800kg weights to be placed in the aft cargo hold in the rear pallet position.
The draft proposal is the rear section of a -300 and the front section of a -200.
Top


The LCFs are operated by Atlas. Atlas is based at JFK. It's also their main pilot base, IIRC.
Top
Post Reply