by CaptainKramer
Many have heard of the Human Fly, if not check you can check it out under, "Clay Lacy and the Amazing Human Fly" on YouTube. Well I just finished watching the trailer for Mission Impossible - Rogue Nation, which featured amongst other things a brief scene from the film in which Mr Cruise, slides of the wing of a taxiing A400M Military Transport, (taking product placement to a whole new altitude/level) managing to get a hand hold in the circular cut outs of the baffles or blast doors, (which stick out at an angle, deflecting the airstream when Paratroopers egress from the rear side doors) just before take off. So I am watching the footage of Tom Cruise, holding onto dear life as the A400M takes off, gaining altitude, and I'm thinking, mmm, very convincing CGI/Green Screen/Wind Machine/Full Scale Mock Up of A400M, type Special Effect, but no way would they, i.e. Tom's Mum/Studio/Insurers ever let him. But amazingly, he did the stunt himself, not once, but 8 times!!! Don't believe me, go to BuisnessInsider.com, type in "How Tom Cruise did plane stunt in new Mission Impossible", and you too will believe a man can fly, in this case while strapped to the side of an Airbus, A400M. Simply A-MAZING! (Sorry I didn't type in paragraphs, it wouldn't let me). 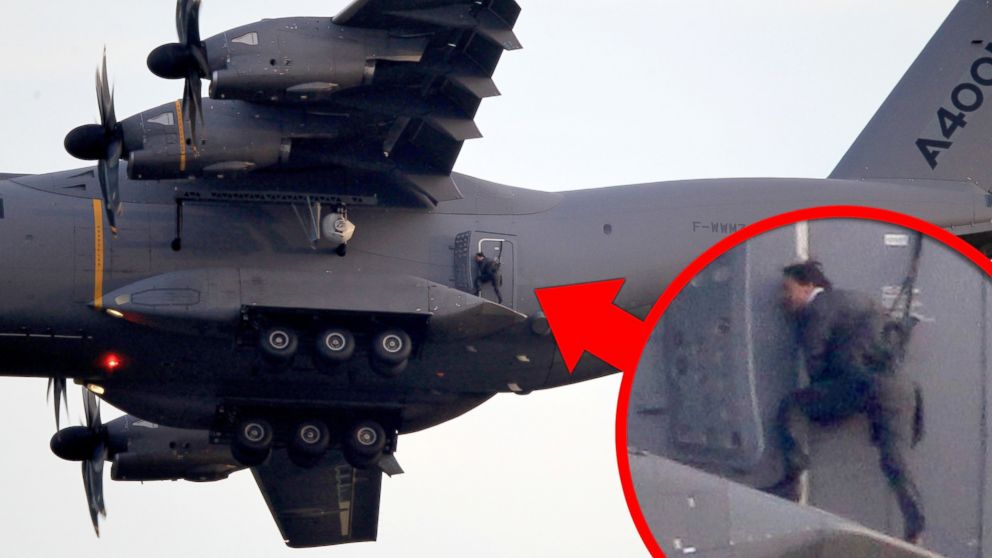 Got to give it to him, he's got them well attached...

by CaptainKramer
Thanks for the photo francoflier. It looks like the baffle or blast door is deflected out in the photo you posted, providing some relief between takes, from the relentless 150 knot winds (or there abouts!) he would experience up there. The photo also shows flaps deployed, allowing the A400M to fly low and slow. You can also see the camera pod mounted under the wing running on a dolly track, no doubt capturing the moment in IMAX. Tom Cruise is well attached, I am imagine the stunt team and aviation engineers would have wanted at least three anchor points for redundancy, two of which, concealed under Mr Cruise's Jacket, the rear door next to him would also be opened up, allowing him back inside, if the perverbial hits the fan. However you said, "he's got them well attached", meaning Tom has, in that sense I am in total agreement with you. I just hope cinema goers who eventually watch the film, don't think the scene was shot using CGI, Mock Ups and Green Screen, the worst thing to happen to movies involving live stunts, in the history of cinema. I listened to the commentary on the Bond film, Skyfall (Yes I know, I am that "Sad"). The Director, and Producers were recounting how the tube train that came crashing through the brick wall trying to crush James Bond, under London City, was actual filmed on the 007 Stage at Pinewood Studio's, no models or CGI were used, 2 full scale sized replica tube trains actually came crashing down into a cavernous basement set, that they built and filmed the actors on. Unfortunately there was no one in shot, so no scale, so I immediately thought model, along with alot of other people who told the Producers and the Director the same. My point is and the real kick in the head, is that 2 million dollars was spent staging a sequence the audience thought wasn't real, in the sense that it was like magic, a slight of hand trick.

by Max Q
They just told him Oprah's couch was outside.

by CaptainKramer
Recently saw the film. I was only joking about product placement, thinking they were going to remove the Airbus A400M lettering from the side of the aircraft in post production, but no there it was in plain view on the side of the bad guys European Transport, or which ever country it was meant to represent. I wonder if anyone in the audience bought one on the back of seeing it in the film?

No, but maybe they felt better about their government sinking a considerable portion of their taxes into one...

by 777X
An A380 also appears somewhere in the movie.
All times are UTC
Page 1 of 1
Powered by phpBB® Forum Software © phpBB Limited
https://www.phpbb.com/