With the end of the year rapidly coming closer (or already behind us for some), how about your personal top 3 of photos you took in 2019? Let's see those rare or meaningful photos. If you have time, a good story can make a nice photo even more awesome.

I'll kick off with the following 3:

Since 2013 we are able to receive widebodies, but it took 5 years to finally welcome the first one. As such, a full stop widebody is still a relatively rare occurance for anyone at the airport. This year, we welcomed our second one (both were operated by Atlas Air B747's). Whereas I took it upon me to collect photos last year, this year I was the chosen one to marshall it. A very cool experience for sure! I put my GoPro to good use as well, if you're interested you can see the video here: https://youtu.be/0IPbLvFlpFA

2019 was also the year that I finally nailed a proper mooncrosser. A very clear sky, lots of tracking on FR24, freezing my ass off outside and a bit of luck all paid off in the end. After cropping, I was left with just over 1024px. Although not the best quality, still a pretty decent result and very happy with that.

The third photo was a tough choice between this one and an An-74, but in the end the story and thought behind the photo was the deciding factor. Early June, I went to Normandy for the 75th anniversary of D-Day. A lot of Dakotas were scheduled to come, from all over the world. Some of the original D-Day squadron birds were also present and a huge para drop was organized at one of the original dropzones. Several passes of DC-3's overhead, paras everywhere. What a sight.

Oh man, I’ve got too many to choose, all of my photos have a story behind them in some way or another.

#1: Not a shot in the anet database but it has a story behind it. So it’s worth sharing non the less. https://flic.kr/p/2i7Y8ib

In 2014, a man decided one evening to grab his weapons and shoot at every single police officer he saw, and managed to kill 3 officers, and severely injure 2 others. It put the entire city on lockdown for I think 3 days. We were just outside the “zone” where the police looking for him thought he was hiding. Police were up and down our street constantly, armed to the teeth. The entire time he was “loose” we were in the basement, watching tv and playing video games. They eventually caught him and people could leave their houses again.
For those wondering: he’s currently serving a life sentence with zero chance of parole.

The photo shows the RCAF Snowbirds preforming the Missing Man Salute over the statue/memorial of the terrible event of 2014. That was pretty special, most of the city came out for that flyby.

This was taken on a day that I’ll remember forever, a close friend whom I hadn’t seen for over a year and I spent the entire day messing around, making up for the year we were apart. :p

Him also being a spotter, we headed out to CYYZ that evening for some golden hour shots.

We rolled up to one of the many FBOs at CYYZ knowing before hand that the Swedish Airforce G550 was parked there, though it was rather close to the fence, trying to work out how to shoot it (to close for a wide lens without all kinds of fence in the frame), one of the employees opened the gate and beckoned us through the gate and said to take photos from inside the fence. We couldn’t walk right up too it, but being on the other side of the fence allowed for some more creative shots.
The look on our other friends face (who abandoned us to go shoot something else) was priceless when we told him what happened.
Karma!

After years of standing next to it taking photos, I finally got to take photos from the top of the CYQM ATC tower, the aircraft parked on the main FBO ramp made it just a touch more special

I look forward to reading other people’s posts!

2019 has been a big year for me. I have faithfully browsed Airliners.net since 2004 (joined in 05) and never dreamed of having any photos on the website. Last year, I finally tried my hand at photography and have learned so much over the past year in particular. Lots of growing pains, frustration rejections, and "oops duh" moments on my part, but it's all part of the journey!

Choosing only 3 was difficult, but.... here they are.

Super 80 Send Off: A somber day for us in the DFW area in particular, and very much so for myself. It has always been my favorite airliner since it was my ride of choice as a kid between PDX-DFW. Each MD-80 that departed DFW for the boneyard at ROW put on a heck of a show, departing in memorable fashion one last time!


This was a "right place, right time" photo. Tinker AFB air show back in June. Around 11 AM, a large squall line of thunderstorms was rolling in from the west as the sun shone behind our backs. Despite the incoming storms, the WWII bombers flew and I got B-29 "Doc" showing off it's massive wingspan with an amazing contrast to the incoming storms.


A personal favorite of mine this year. I get to not only witness such a legendary airplane, but also my best friend in the right seat (seen looking ahead) as they performed a currency flight at AFW. I really feel like it shows the complexity and human factor, rather than simply only the machine.

I look forward to seeing everyone elses top 3!
Top

An enthusiast of aviation from China
My photos:
https://www.airliners.net/search?keywor ... lay=detail
Top

The luckiest photo of the year for me. The 787 banked gently around the track giving me literally dozens of good frames.

First ever photo of this airline on the database. It has never happened to me before, and I doubt if I ll manage to accomplish something like that again.

And finally, a photo that was taken the Sunday when Thomas Cook collapsed, quite a feeling taking pictures and not knowing if this is the last time. Eventually it wasn't the last time for the Scandinavian branch...
My Photos on Airliners.net: https://www.airliners.net/search?user=201240
Top


Hard to not include the Seattle fall foliage. This day was pretty crummy weather wise but the sun popped out for this shot luckily!


Dreams Take Flight, not sure I need to say much more!

Love this livery and a ton of things had to work out just perfectly for this shot to come together. Timing of arrival, availability in my schedule, traffic not being too bad, weather somewhat cooperating, and other variables lining up. It was very satisfying to have all that work out!


Got to throw some love to this old classic. Supposedly this frame might see service with Everts, but at last check it was still in FAI in a somewhat-dismantled condition. Hopefully we have another Maddog in the skies again soon!
Hey, thanks for stopping by! My photos can be found here: https://www.airliners.net/search?user=17 ... lay=detail
Top

Could we make this a Top 5 instead? So tough for me to pick.


In April, British Airways resumed service to PIT with a 4x weekly B788 - the first scheduled nonstop flight between Pittsburgh and London since 2004 and the first on BA metal since 1999. I had a ramp visit for the inaugural flight arranged several weeks in advance, but I was really worried if the it would make it in time before sundown. Turned out the flight arrived at the absolute perfect time in some amazing evening light. Couldn't have asked for anything better.


After only visiting here a single time in 2018 (and in terrible light), Condor's retro livery visited us four times in 2019 - including twice within the span of a week. I made damn sure I would catch it in good weather this past year and I'm happy I accomplished that. Took this shot from our employee lot which is very close to the end of the concourse where the flight parks.


My first time seeing Space Shuttle Atlantis back in August. This was a very tough shot for me to pull off and I was quite skeptical of it getting accepted. Fortunately, I was able to get it in. I had to wait for what felt like forever for people to clear out of the Atlantis exhibit and allow me to get an obstructed view before the next group of visitors came in (those who have been to KSC know what I'm talking about). Seeing the Space Shuttle in person never fails to amaze me.
Top

Evan, your Atlantis shot is very well done (especially in that kind of mixed-lighting environment!). I also particularly like Kas's Dakota and Dylan's head-on shot of Fifi, and I'll continue those themes: 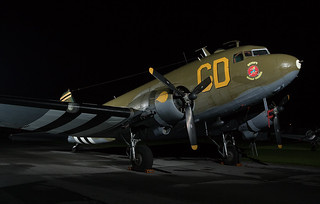 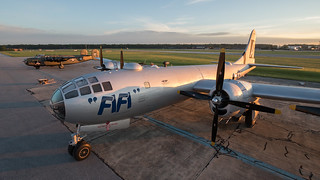 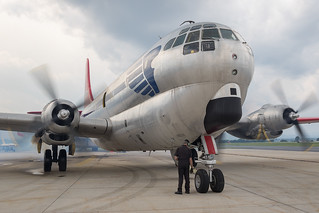 On Flickr
"That's so stupid! If they're so secret, why are they out where everyone can see them?" - my kid
Top
Post Reply

Users browsing this forum: No registered users and 37 guests