Ok, so im looking for some help.

Im going to be spending a few hours at SZG on Sunday January 7th before my flight home.

What is the deck like? Is it shootable at this time of the year? What time does it get dark? Is it worth bringing a tripod for some night shots?

Two photos from January 2006 from the terrace:

Here's the official airport link where you'll find a 1 week forecast of the arriving and departing aircraft:

Photo from the deck: The deck is however closed if it is covered with snow and/or ice; if it is open it's definitely nice for some close up shots of the aircraft on the apron. The 18-200mm lens is perfect for that!

I don't have a link ready now for a map of the airport but it's not necessary anyway as the airport is small enough that you'll find everyting you need in no time. The deck is accessible directly from the front side of the terminal.

Depending on my working schedule and the weather I might be there as well.

It was 'officially' closed for my visit on 12th Jan this year, however everyone was still going up there and shooting. It's a pretty good deck, with everything to your left being photogenic early mornings. The situation improves as the day goes on but you'll struggle to shoot stuff at the far right of the terminal...

...unless you exit the building, turn left and left again by the coach park. Follow the footpath past the old DC-3 and you'll find a handy mound from which to shoot.

Nice shots you have all posted! Thanks for the links too.

Also, to what extent do the Russian aircraft visit? I see the 154 there but are there any other common Russian AC that visit in January?

It will be different next year as the Russian carriers acquire more western-built aircraft. Some say that this year was the last for the good quantity/variety of Russian movements, but we'll just have to wait and see.

Tu-154s and Yak-42s are by far the most popular 'Ruskies' used to fly to SZG, however there are several flights a week by Il-96s. Unfortunately there are now more 737s and A320s flying into SZG than ever before.

This year all the action happened on Thursday 12th January, and below is a list of the Russians which operated that day:

The majority of these turned up in daylight hours. Add to the Russians the local Austrian Arrows Dash-8s, CRJs and Fokker 70s, Lauda 737-800s, SkyEurope, HLX, Norwegian and Ryanair 737s, Malmo 146s and lots of British charters.

I totally agree with GertLOWG, check out our local spotters website http://www.salzburgspotters.at

Nevertheless some links of interest for you:

Movements forecast for the next 7 days. Interesting flights are marked!
http://salzburgspotters.at/airport.php?lang=de&id=Aktuell

If you need further information send a mail to [email protected] and i'll anser your question ASAP!

See you at LOWS 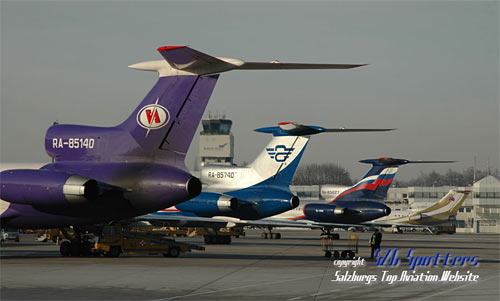 Crikey, yes, I forgot about the Continental Airways Tu-154 that day. That pic says so much; it's almost as though I'm back there.....