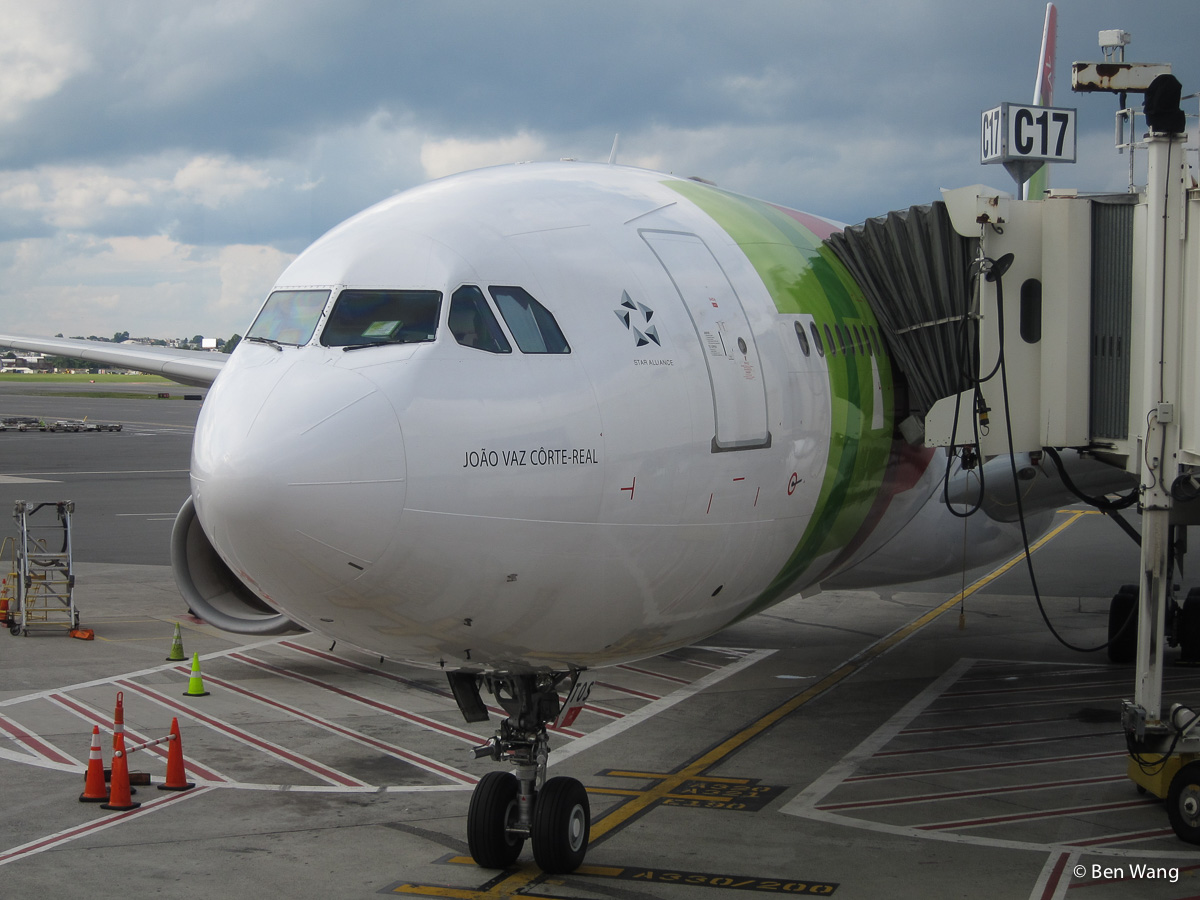 I originally did not intend on writing on a trip report on this flight. But given the relative rarity of long haul TAP Portugal trip reports – especially on an unique A330 with original Azul Business Class seats – I decided to share with you the small number of photos I took as well as some thoughts of the flight.

I arrived in Boston directly from San Francisco on board JetBlue’s excellent A321 Mint service. Connecting to TAP was as simple as walking from gate C9 to C17. No re-clearing through security, no inter-terminal transfer hassles…nice! 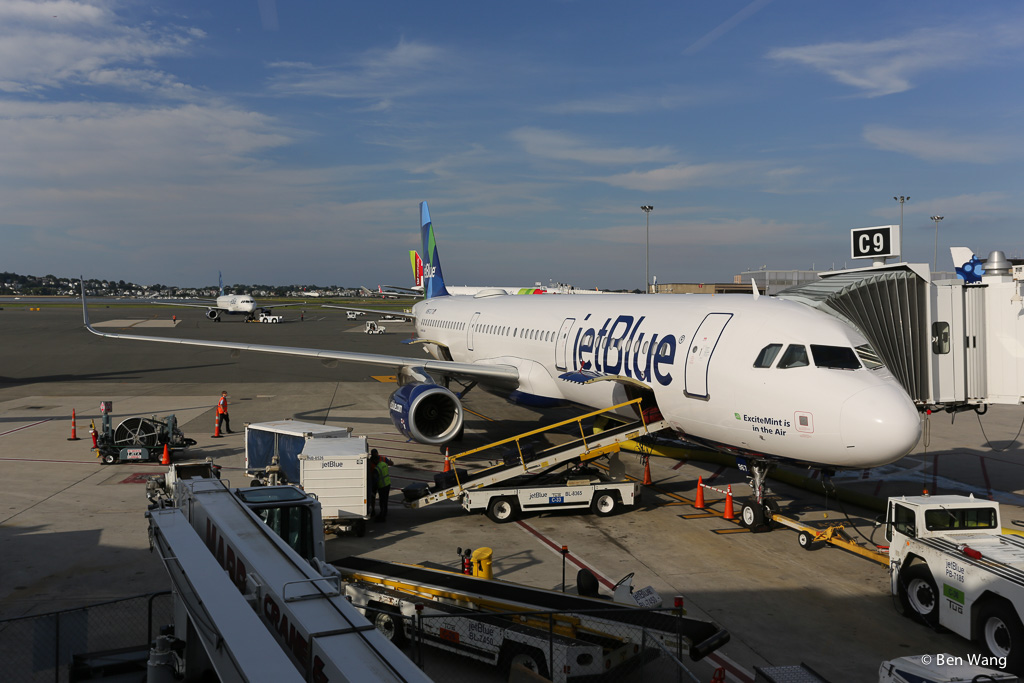 I had about one hour before scheduled departure. Gate agents were announcing over the loud speakers that if you had arrived from a connecting flight, you had to re-check-in at the gate for documentation verification. In additional to passport check and reissuing of boarding passes on TAP ticket stock (my airline geekiness was thankful for that), gate agents were strictly enforcing the carry-on size limit using the bag template. Despite them telling everyone that the bag would be checked for free, people were still reluctant. When it was my turn at the counter, I immediately offered my bag for gate check. Agent gave me a TAP luggage tag. I pointed out my bag already had a name tag. She replied matter-of-factly: “it’s not a TAP tag”. Whatever. With my new boarding pass and bag receipt issued, I was invited to “The Lounge” just a couple gates down.

“The Lounge” is a common premium class lounge used by all airlines. There was a decent selection of hot food and alcohol. A second and separate non-alcoholic beverage counter alleviated any potential crowding. Despite it being a busy afternoon with a number of international departures, I did not have a problem finding a table.

I went back to gate C17 a few minutes before 5:50 pm boarding time and there was already a queue at the door. Gate agent were telling people not to line up and they would be called up in order of grouping. The holding area was small and it got rather crowded (hence the announcement). It was unfortunate that the agents’ pleas went on unheeded.

Prior to embarking on this trip, I knew TAP was in the process of renovating its Business Class product. At check-in, I was happy to see a staggered Business Class seat map, indicating an aircraft with new seats. Or so I thought. Unbeknownst to me until later, my A330-200 CS-TOS was the only one in TAP’s fleet leased from Azul in Brazil. The aircraft is still flying with Azul’s original “Xtra Business” seats. (Sistership A330-200 CS-TOT was also leased from Azul for a short period between summer 2016 and spring 2017.) 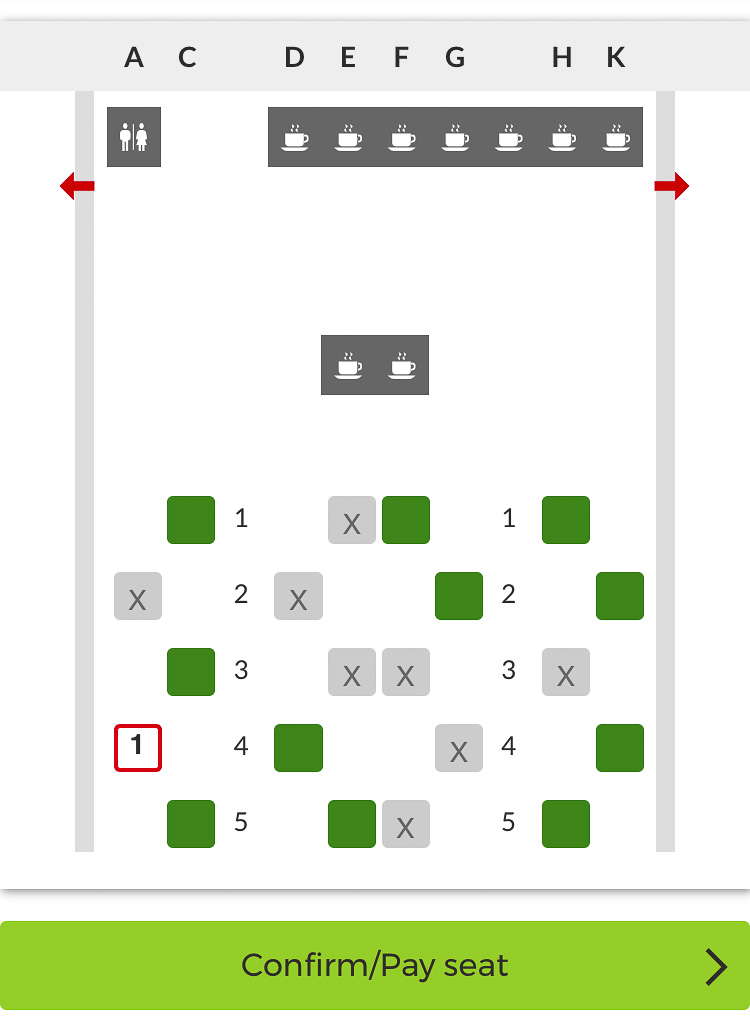 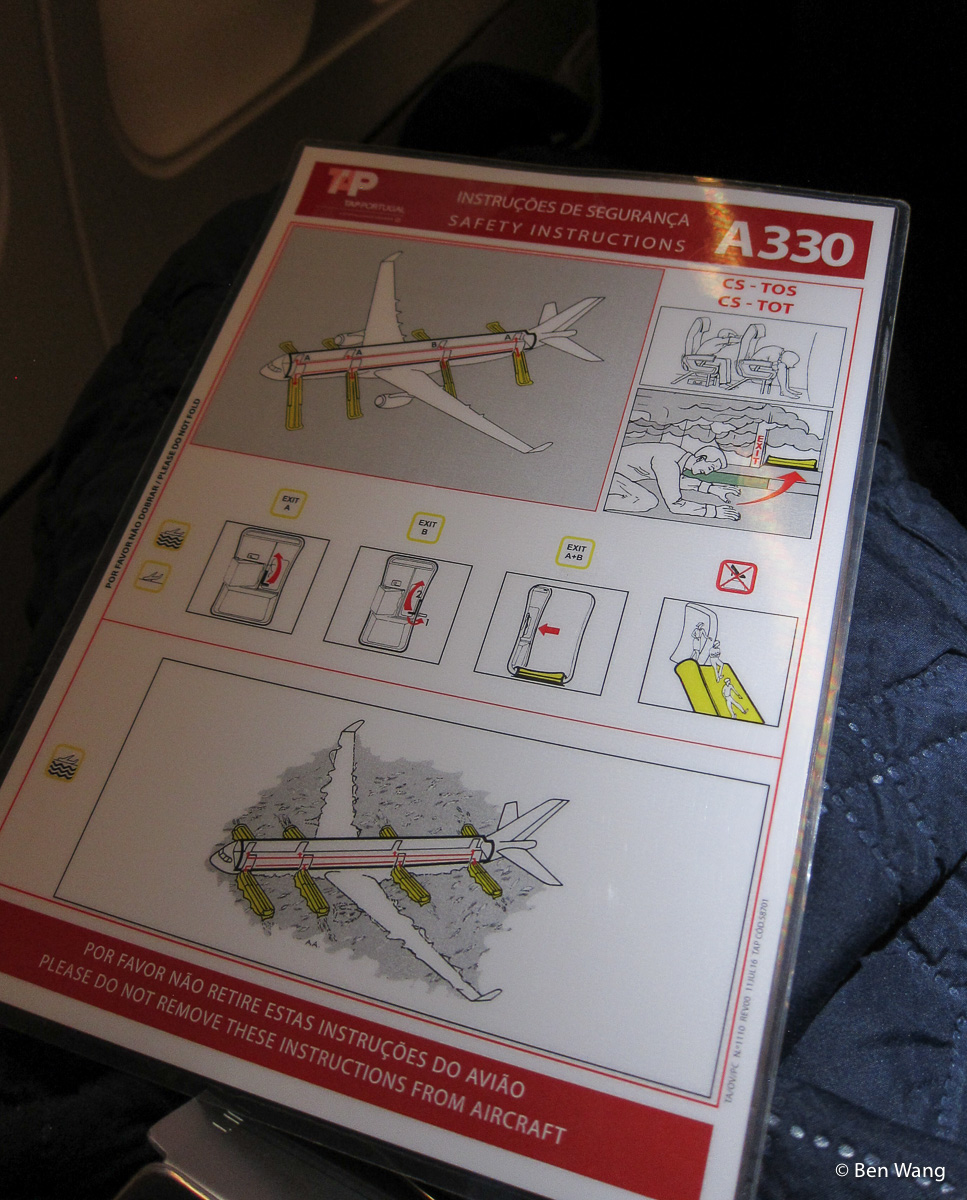 TAP’s own new Business Class product, already rolled out on other A330s, features a similar seat and it is seen here: 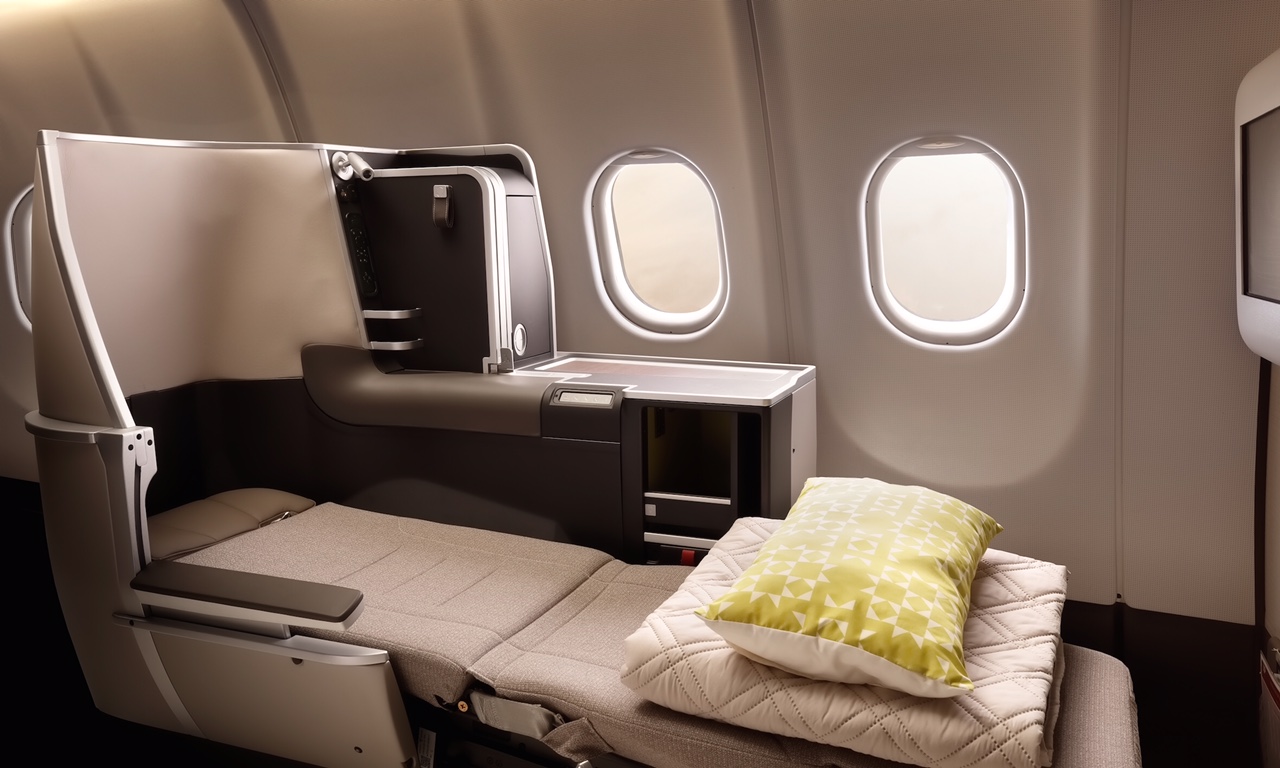 
I am all too familiar with these popular staggered Business seats made by Stelia. I had experienced them previously flying Asiana, ANA, and Thai. While this arrangement offers direct aisle access and maximum privacy, the staggered design is certainly not my favorite. The window seats are simply too claustrophobic for my liking. 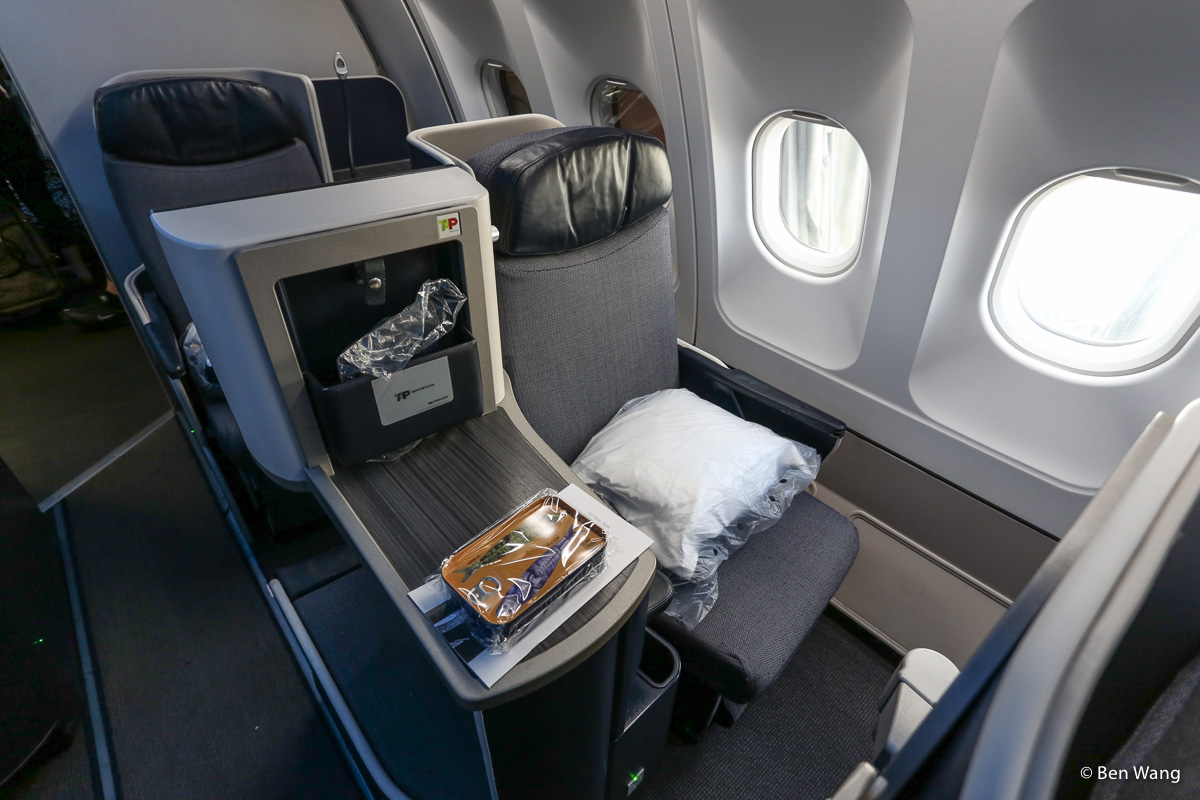 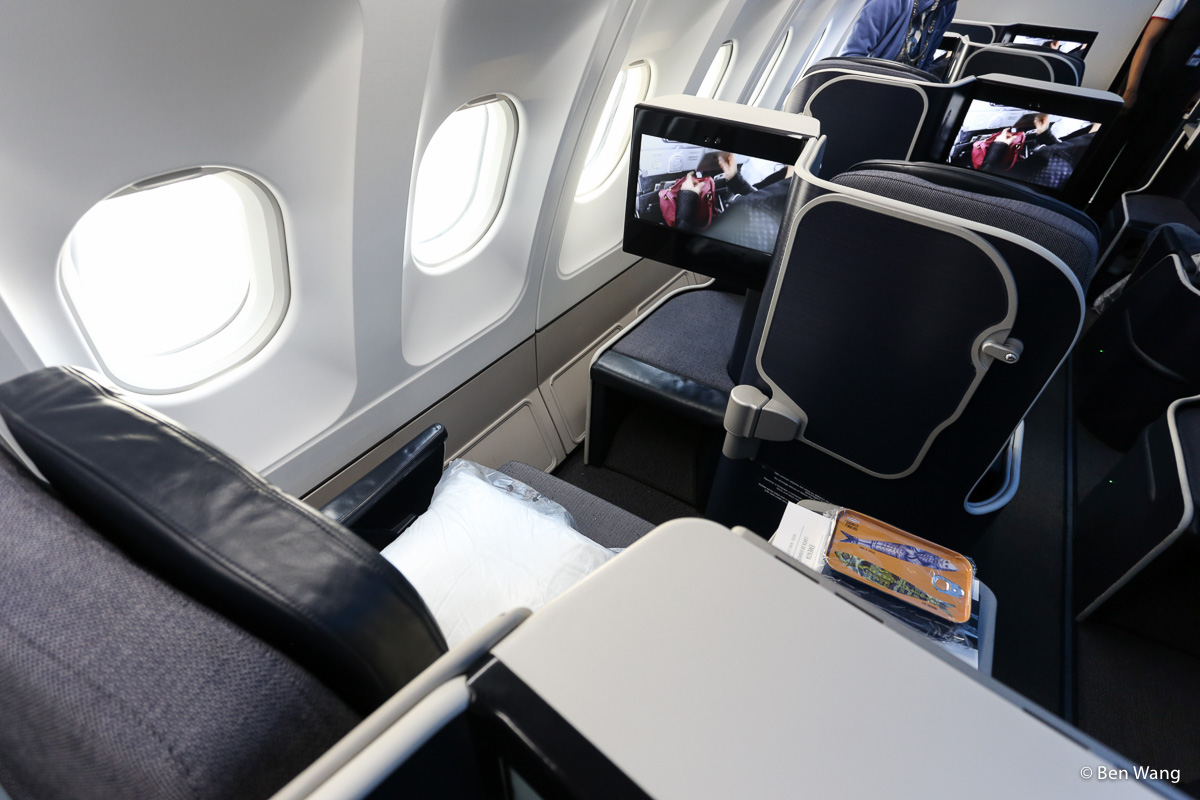 Pillow, blanket, headphones, amenity kit, and menu were already placed at each seat. The amenity kit was in a rather creative sardine can. I chuckled when my neighbor across the aisle opened his can and disappointingly said, “awe, no sardines!” 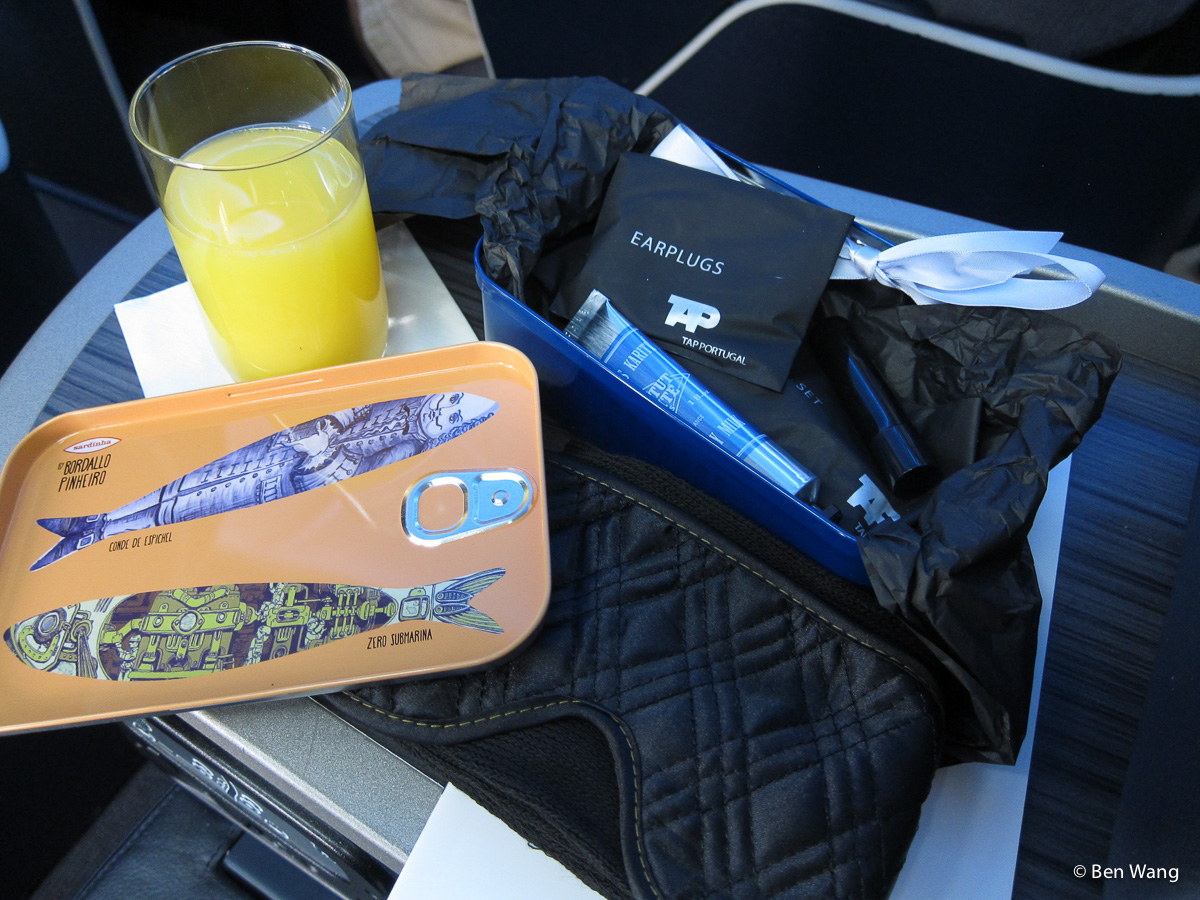 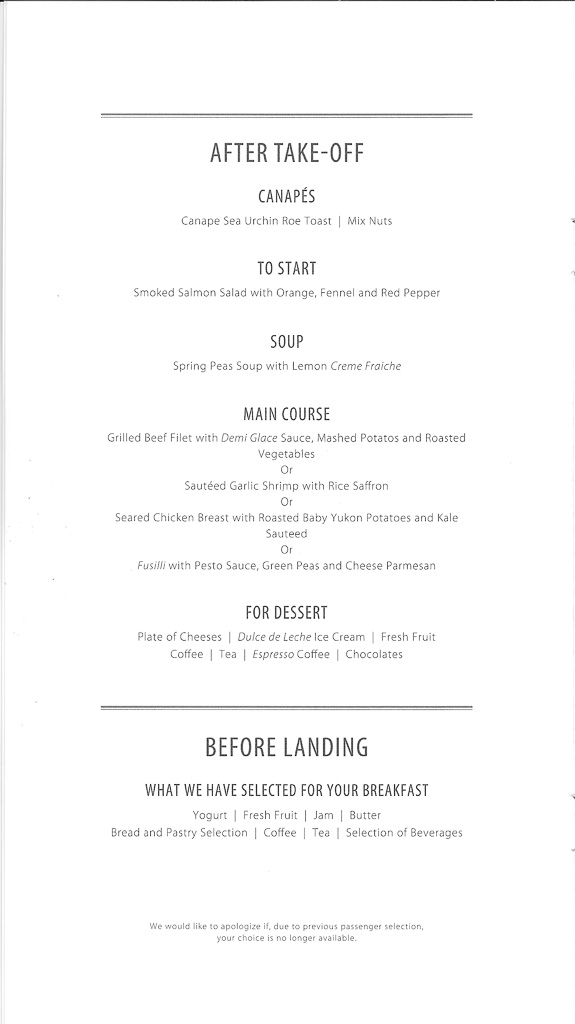 Flight attendant offered pre-departure drinks, I went with orange juice. The purser followed with a selection of newspapers. Apparently, they were not restocked while on the ground in BOS. All except for one was in Portuguese. I went with the only English choice – European edition WSJ.

That was also my first interaction with the Portuguese crew. Language barrier was not an issue at all. Flight attendants spoke perfect English and understood everything I said. I found this to be the case in general while in Portugal as well. A pleasant surprise! 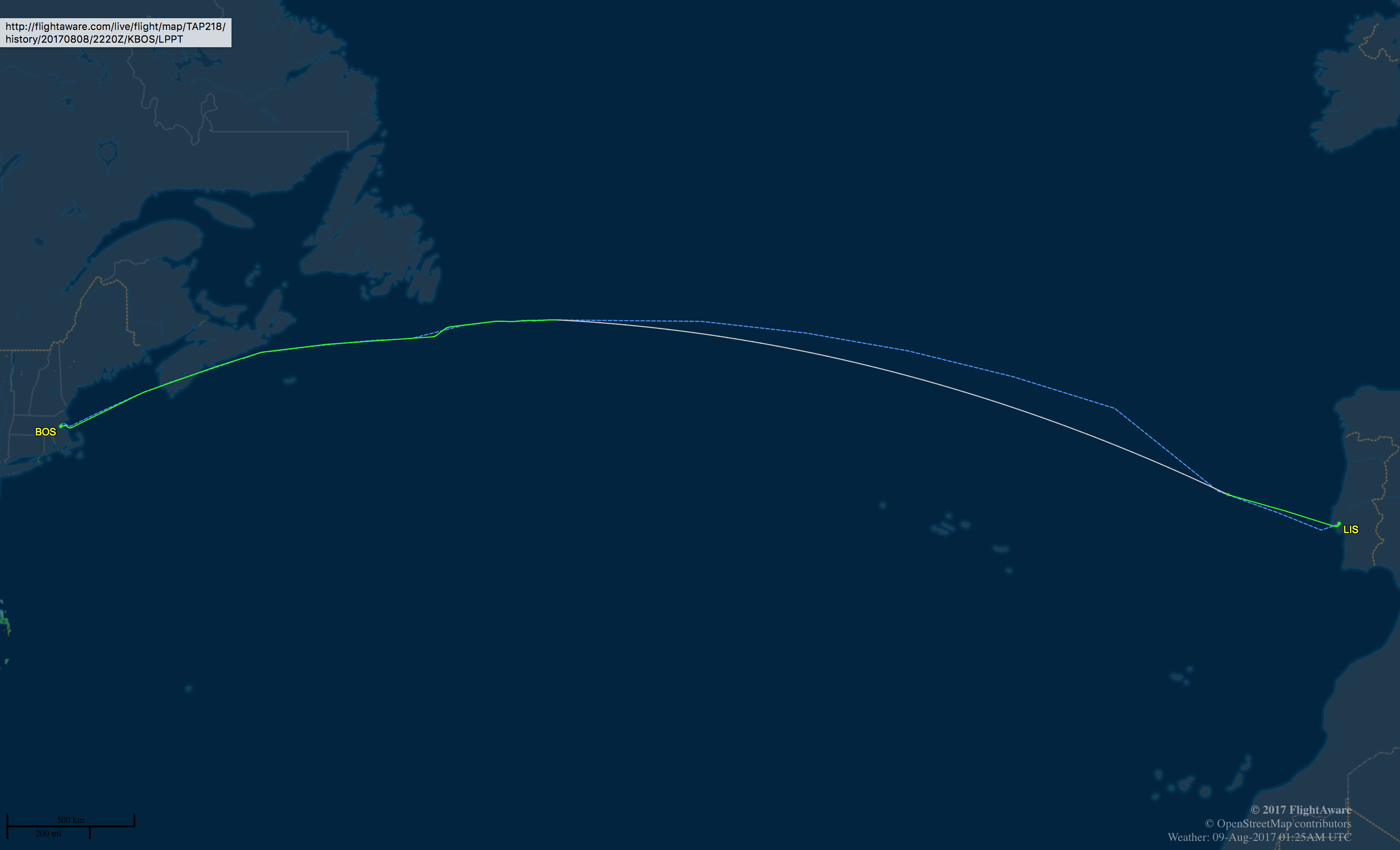 At 6:20 pm, we pushed back from gate C17 right on time. Some 20 minutes later, we took to the air from Runway 09 and continued eastward to Lisbon. 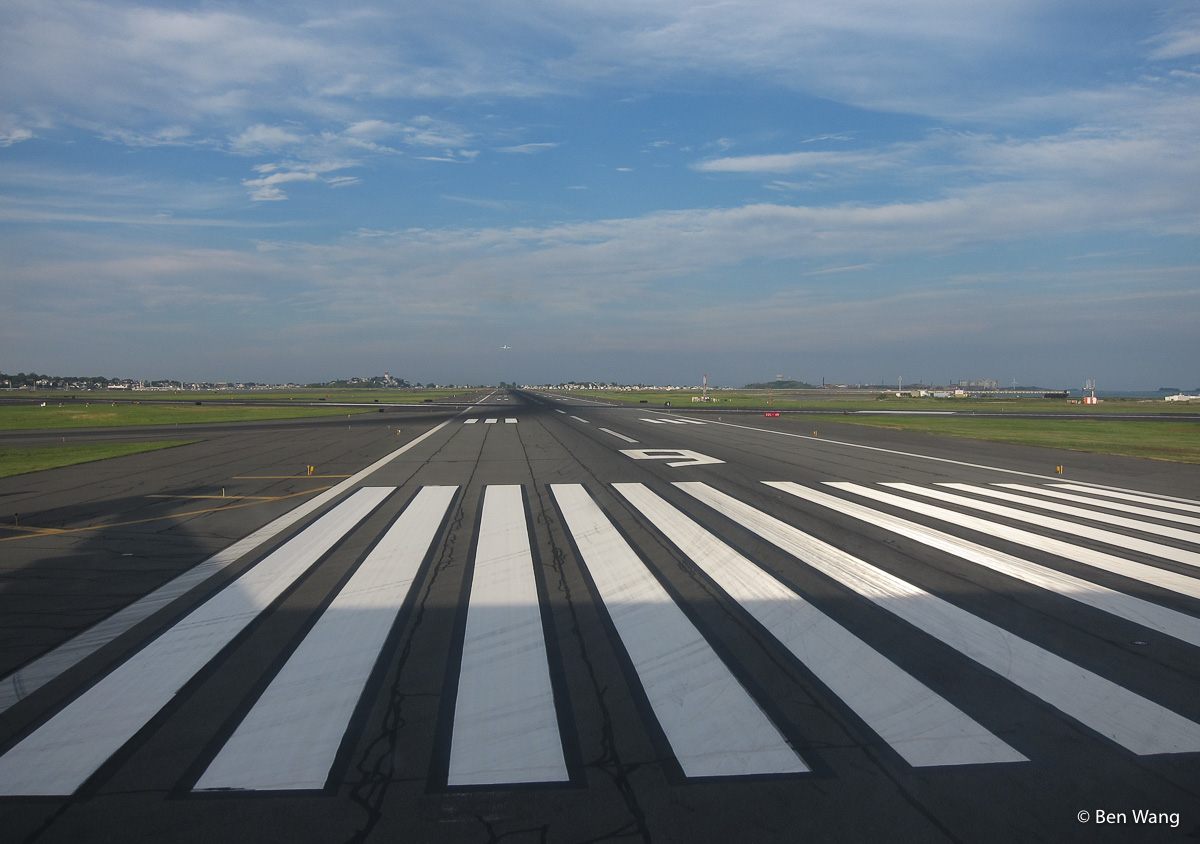 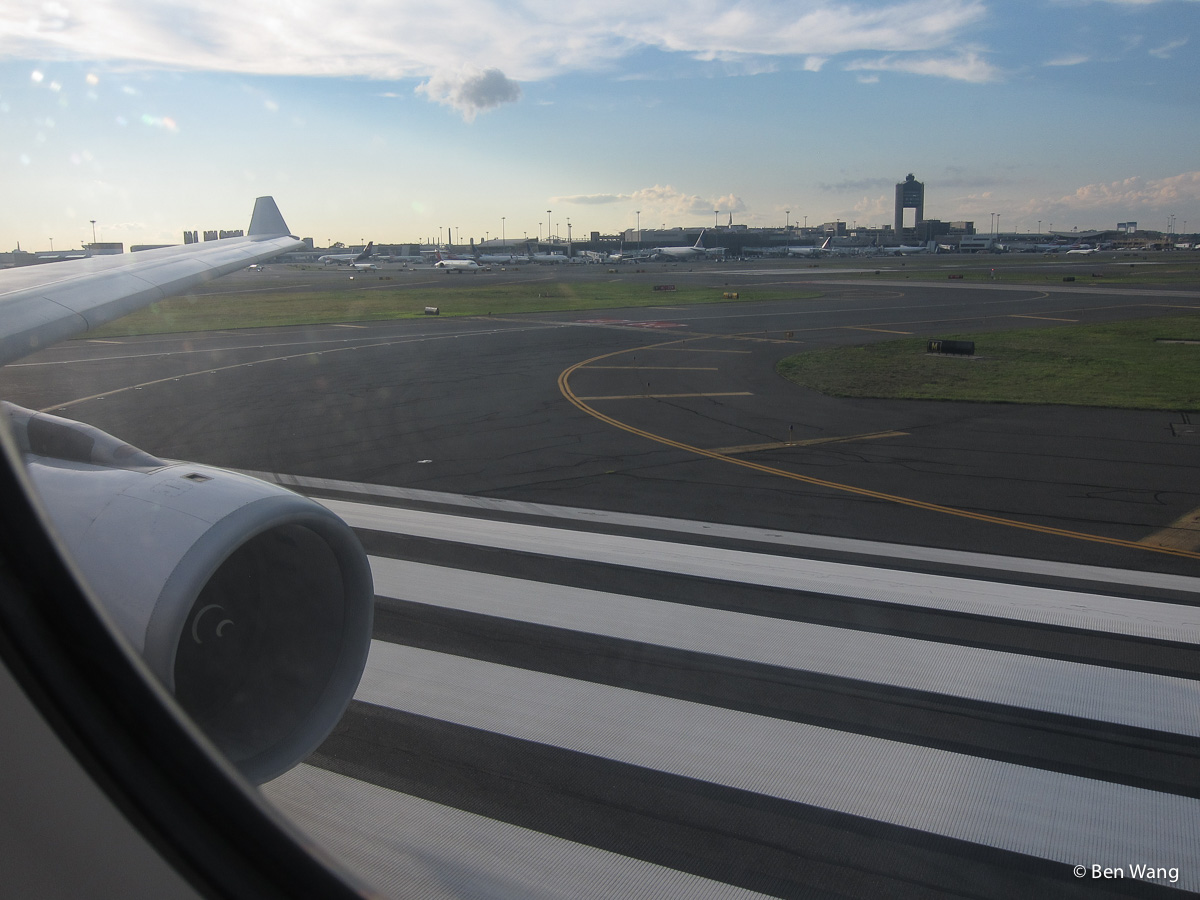 With the sun setting behind us, the crew expediently began dinner service. With a total flying time of six hours, there would not be much time for rest in between dinner and the pre-arrival meal. 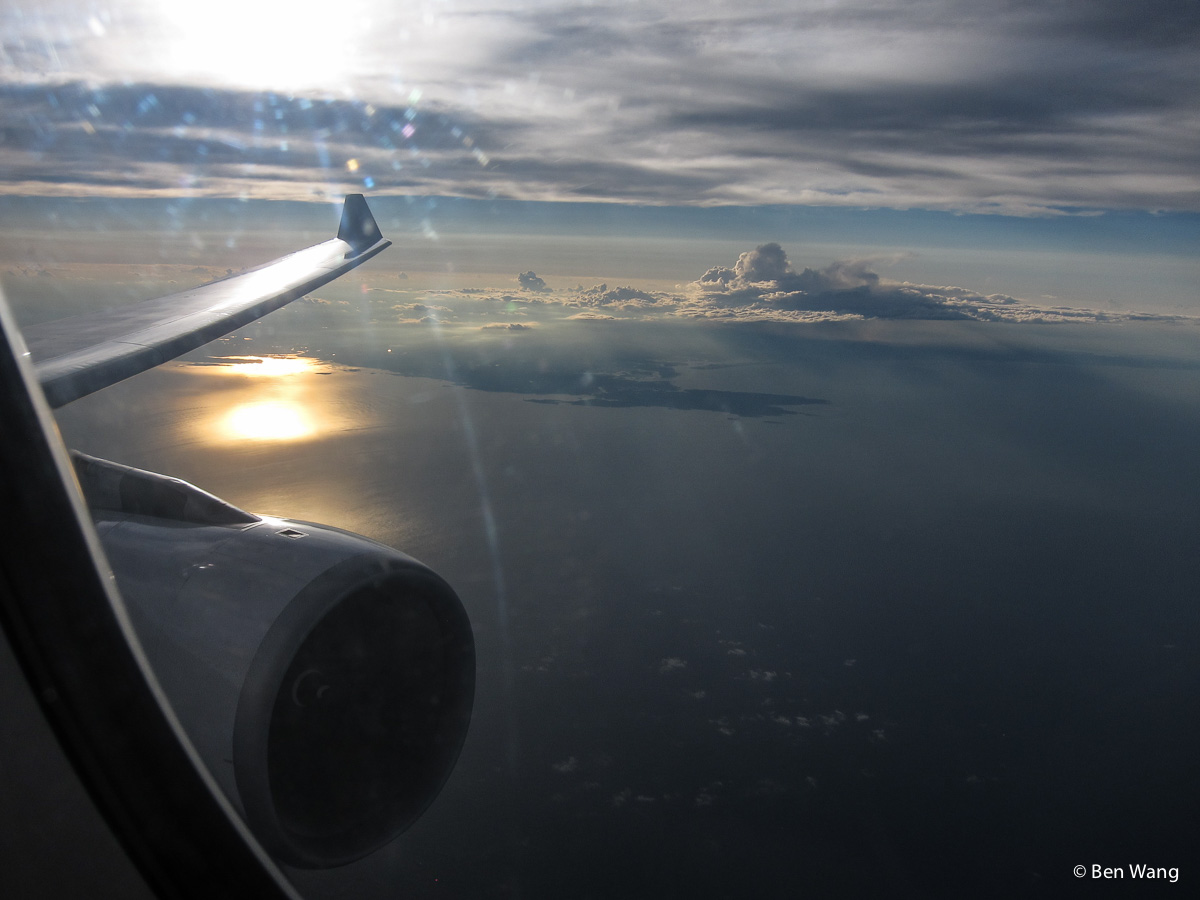 To go along with the canapé, I went with my usual drink: Coke Zero with lemon. I was given the full can (large can for European standard) as well as ice with my Coke. Take that BA and Air France! That's the way it should be done! When I took a bite of the canapé, it had an unexpected pungent fishy taste. I had forgotten what was on it. With a sour look on my face, I checked the menu and realized it was sea urchin roe. 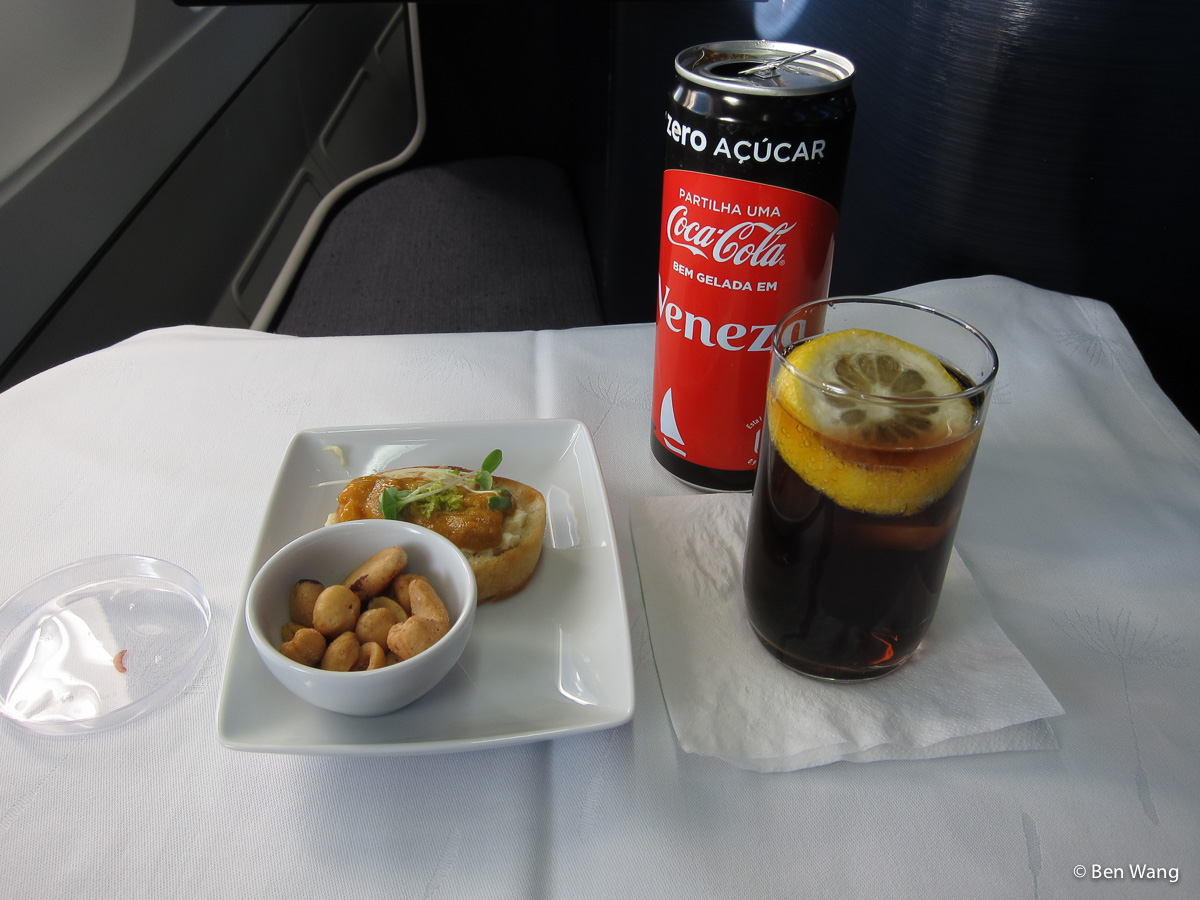 Meal and beverage carts quickly returned with the starter – smoked salmon salad. I was offered soup, which I accepted. It was poured from a rather unattractive thermos that looked like someone’s morning coffee bottle. My drink was swiftly replenished with another can with more ice in my glass.

The smoked salmon salad tasted very unique but the soup’s temperature was tepid, though not unusual among all the soup I have had while flying. 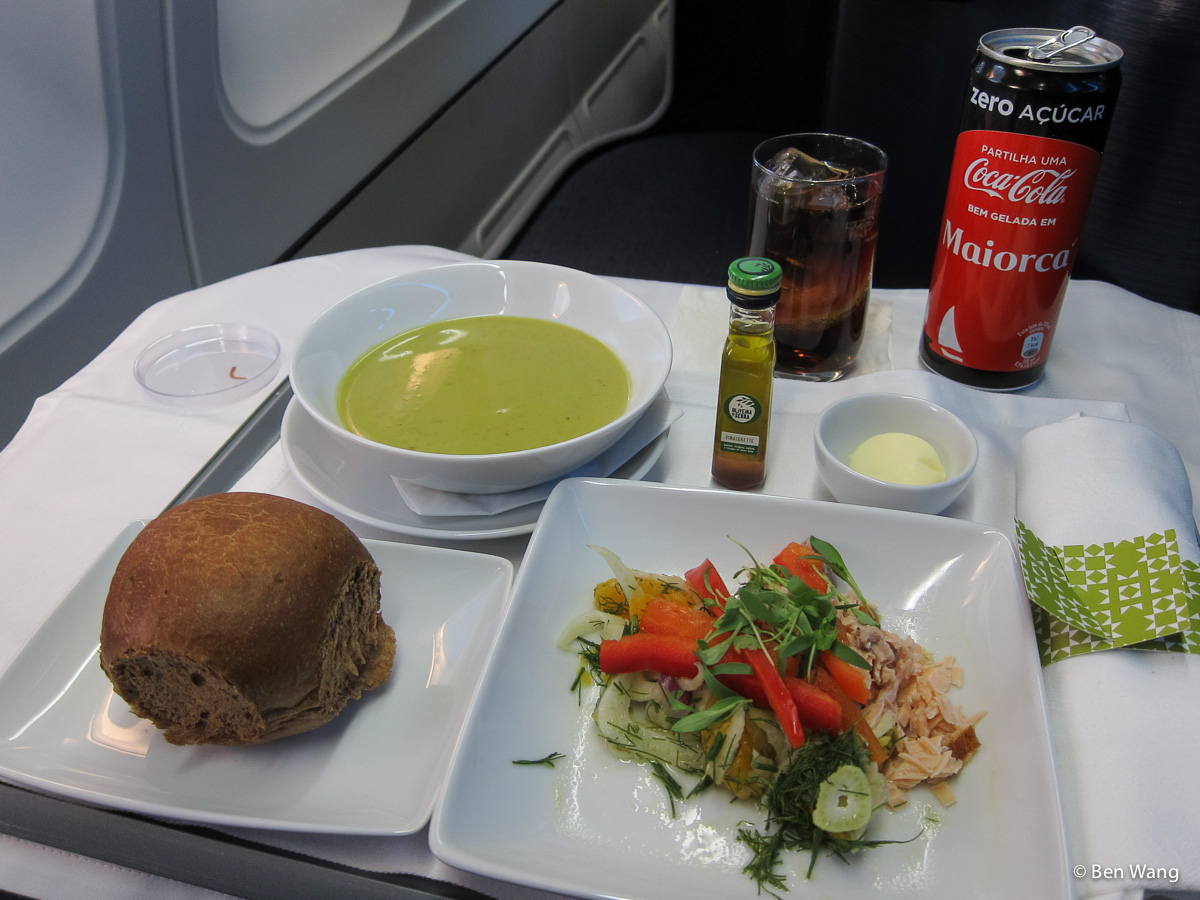 At this point, I could tell the service pace was going to be quick. No sooner after the meal cart went past, the purser returned with the clean-up cart. It was like an orchestrated merry-go-around: meal cart – drink cart – trash cart round and round! 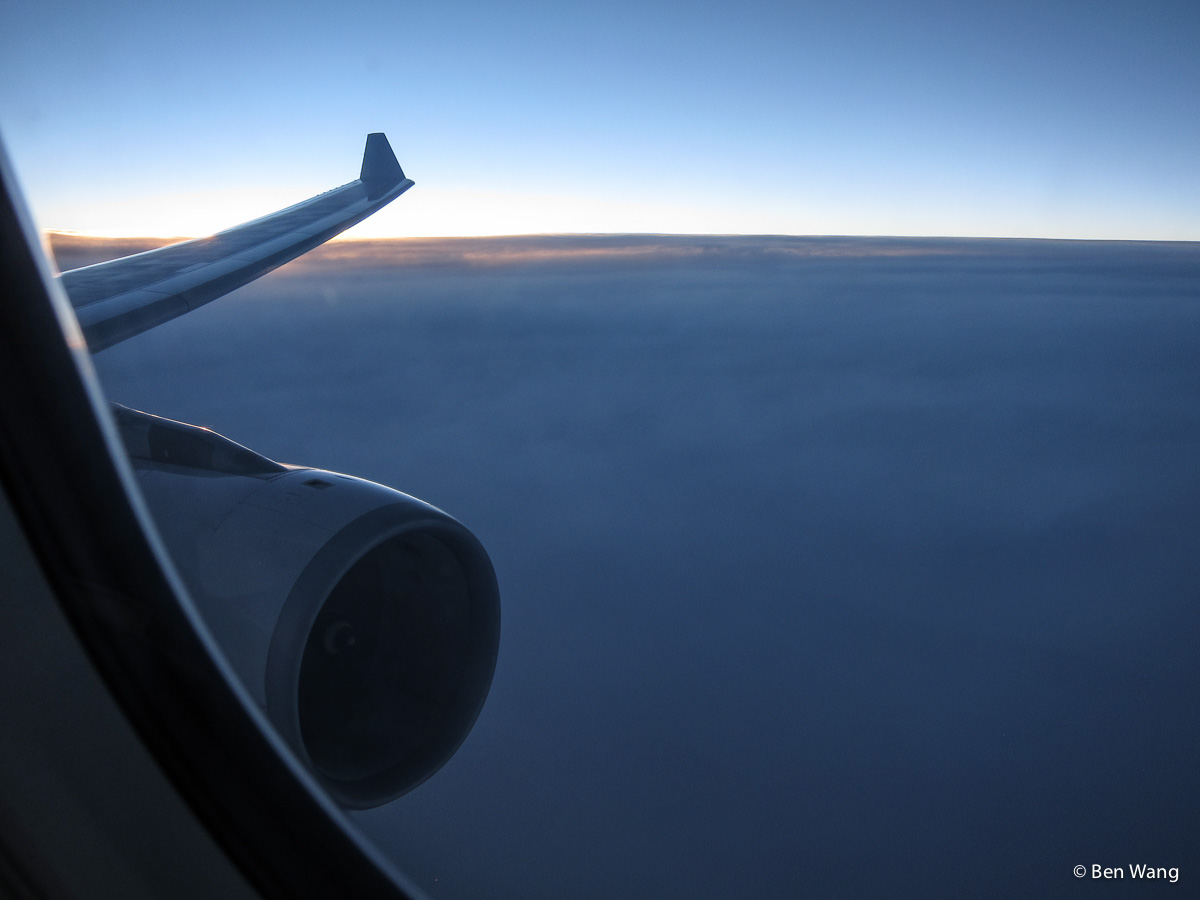 Meal cart returned with my main: chicken breast with Yukon baby potatoes and kale. I took a peek at my neighbor’s dish from across the aisle. The giant shrimp with saffron rice looked like a tastier dish. Oh well. There was nothing impressive with my chicken dish. It was just your standard meat and potato with overcooked vegetable airline meal. 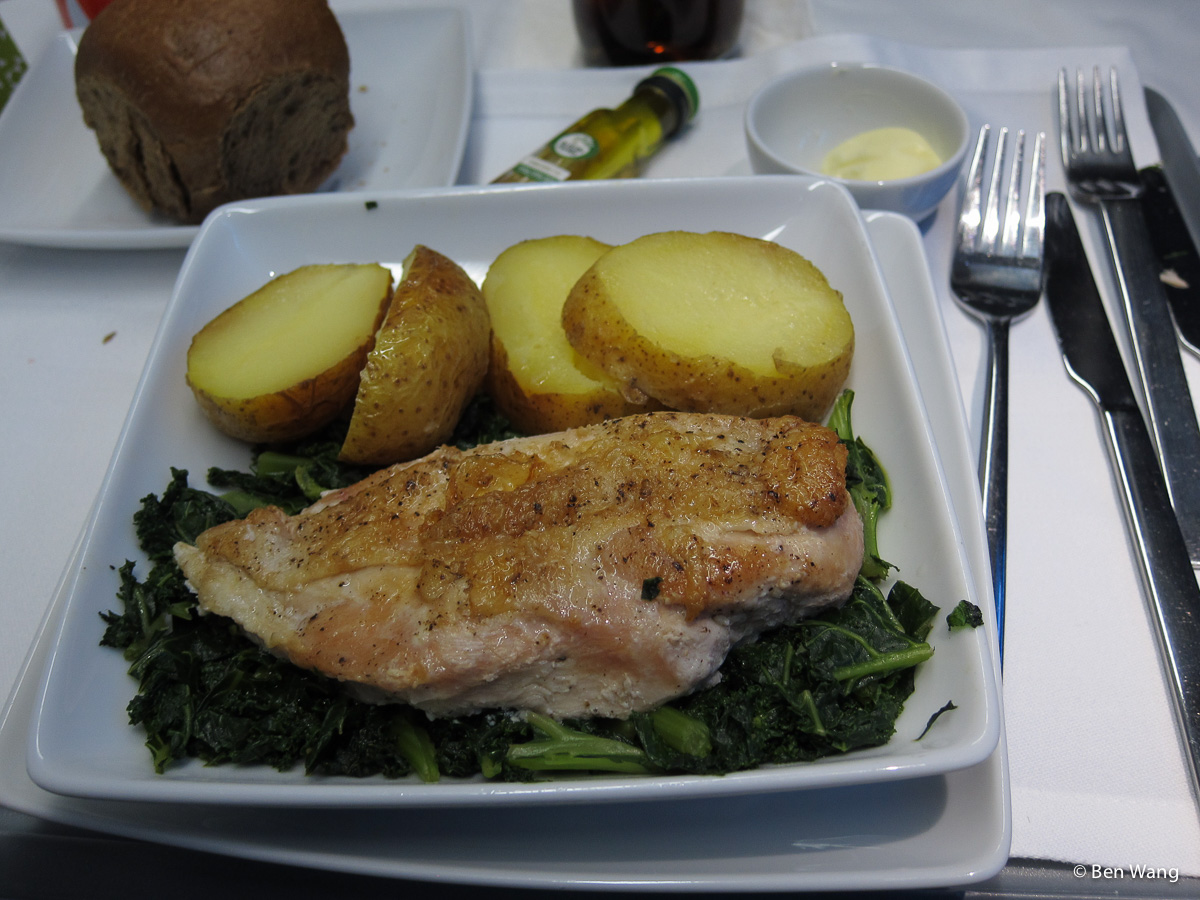 Once again, I had to eat quickly, because here came the plate pickup. Being a Portuguese airline, of course, the Port wine was served as its own course prior to the dessert cart. The purser asked “cheese, fruit?” and paused as if those were the only choices. What I wanted, the dulce de leche ice cream, came a second later: “…or sweet?” I smiled and said “sweet”. Thinking about it, there isn’t really an English translation for “dulce de leche”, is there? 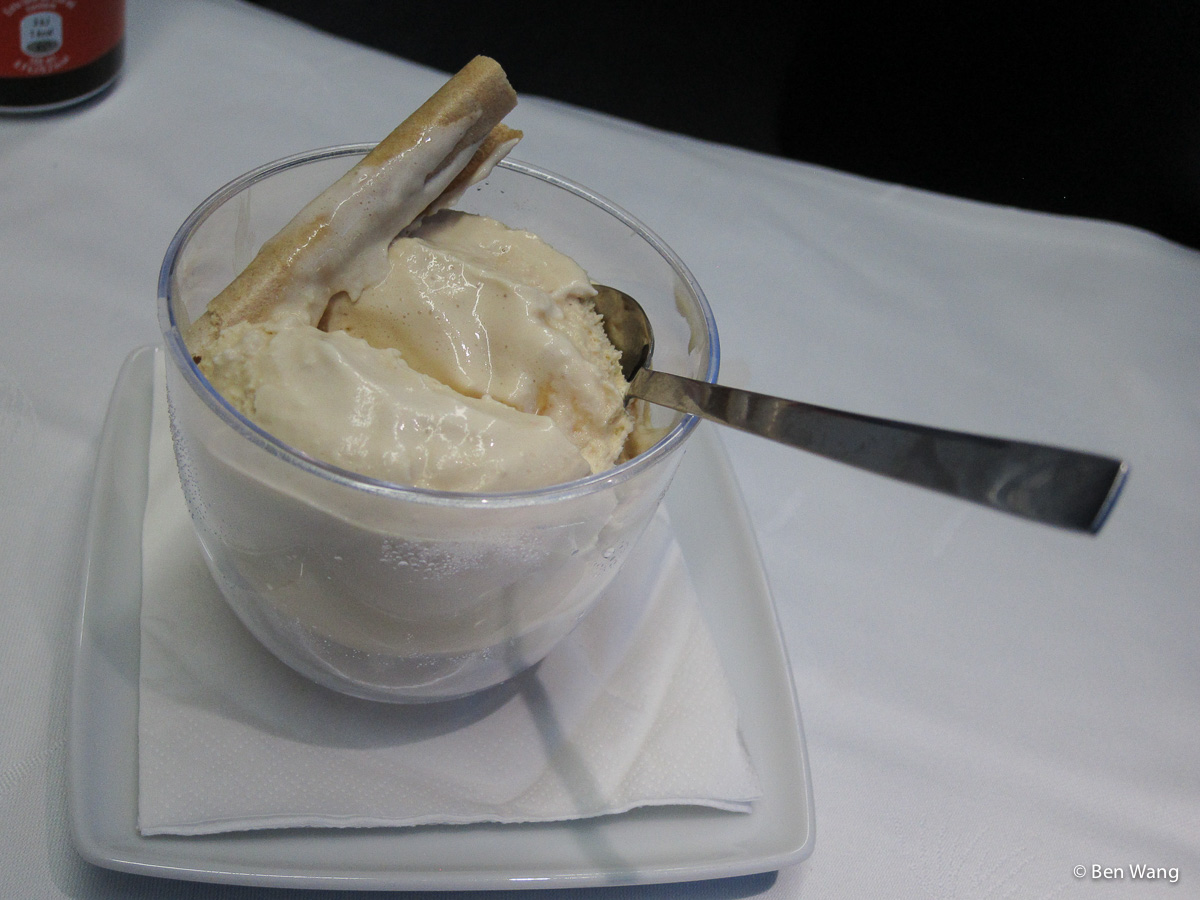 The dulce de leche ice cream was very rich, full of caramel goodness. Purser returned with a box consisting a choice of small chocolate bars. I went with “sal”.

One hour and 10 minutes after take-off, dinner service was complete and lights in the cabin dimmed. It was only 5 pm back home and nowhere near bedtime. Despite that, I took my amenity kit to the lavatory and prepped myself for bed. I thought perhaps, between all the eating and the dark cabin, they will put me in a sleepy mood.

With my seat now in the full flat mode, I snuggled in my blanket and lined up my body with the right seat cushions to get comfortable. With my Bose noise cancelling headphone on, I attempted to sleep.

After closing my eyes for three hours (but without any productive sleep), simulated sunrise lit up the cabin. Lisbon was 90 minutes away. 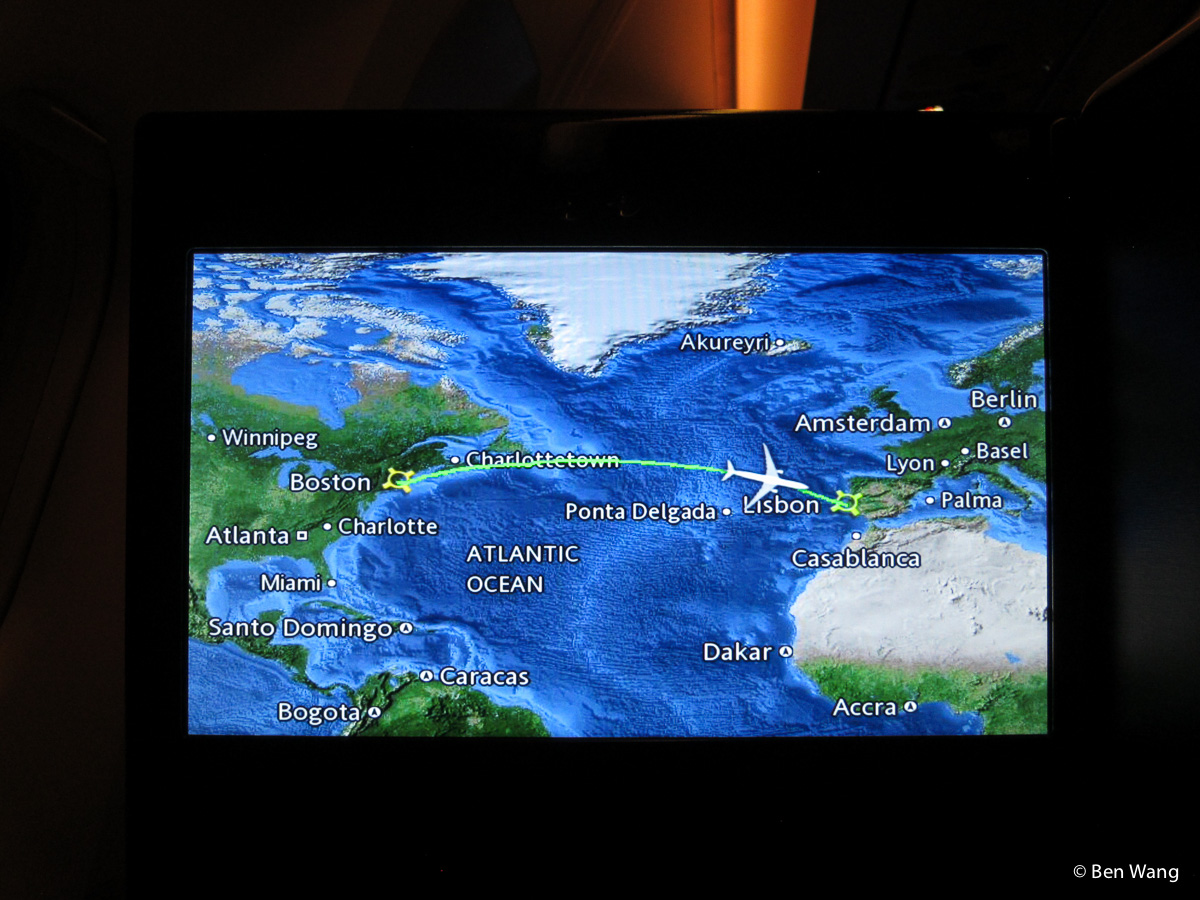 Before arrival meal began with a choice of beverage – I went with orange juice. Meal tray was followed by bread basket filled with delicious warmed breads and pastries. After taking one, the flight attendant encouraged me to take another (and yet a third on the second walk around). 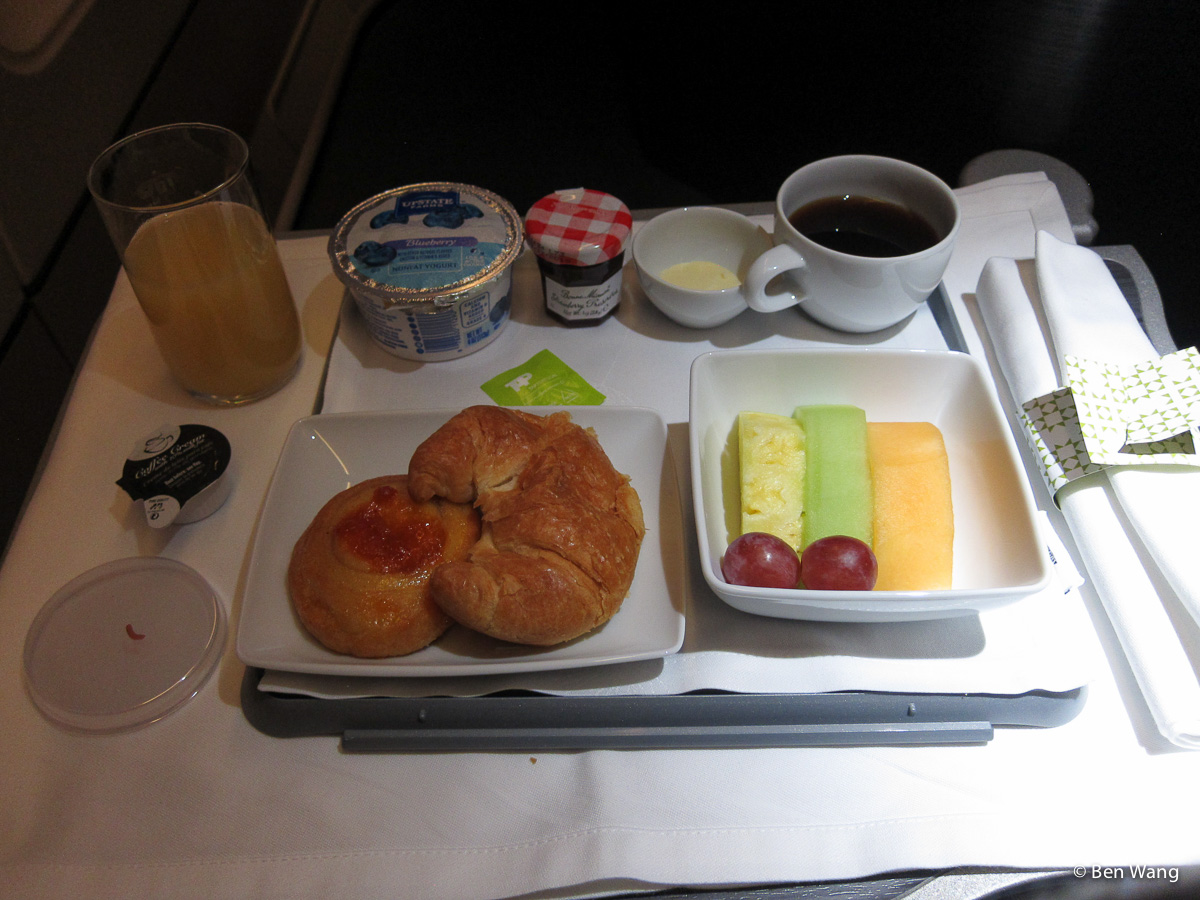 Coffee refill was gladly obliged in a fresh cup served on a tray. How classy! 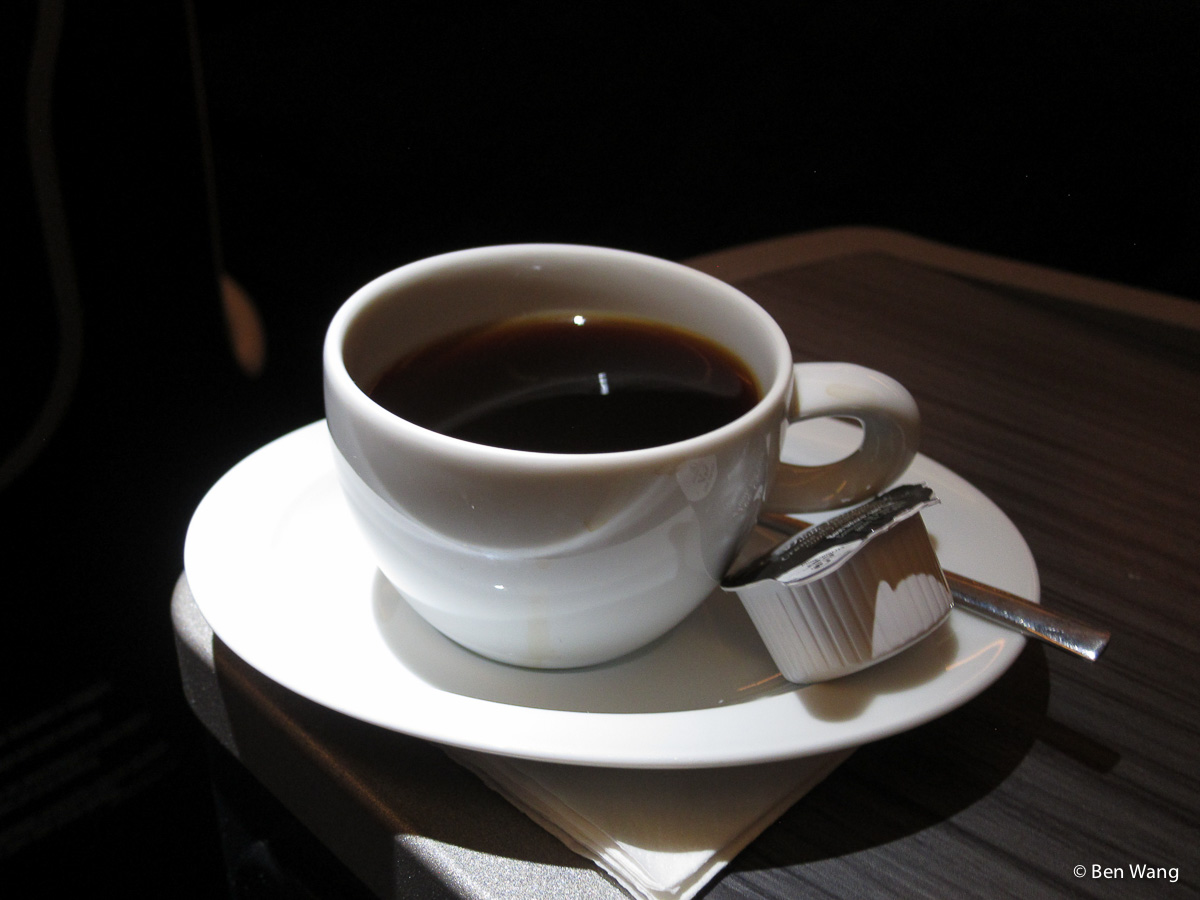 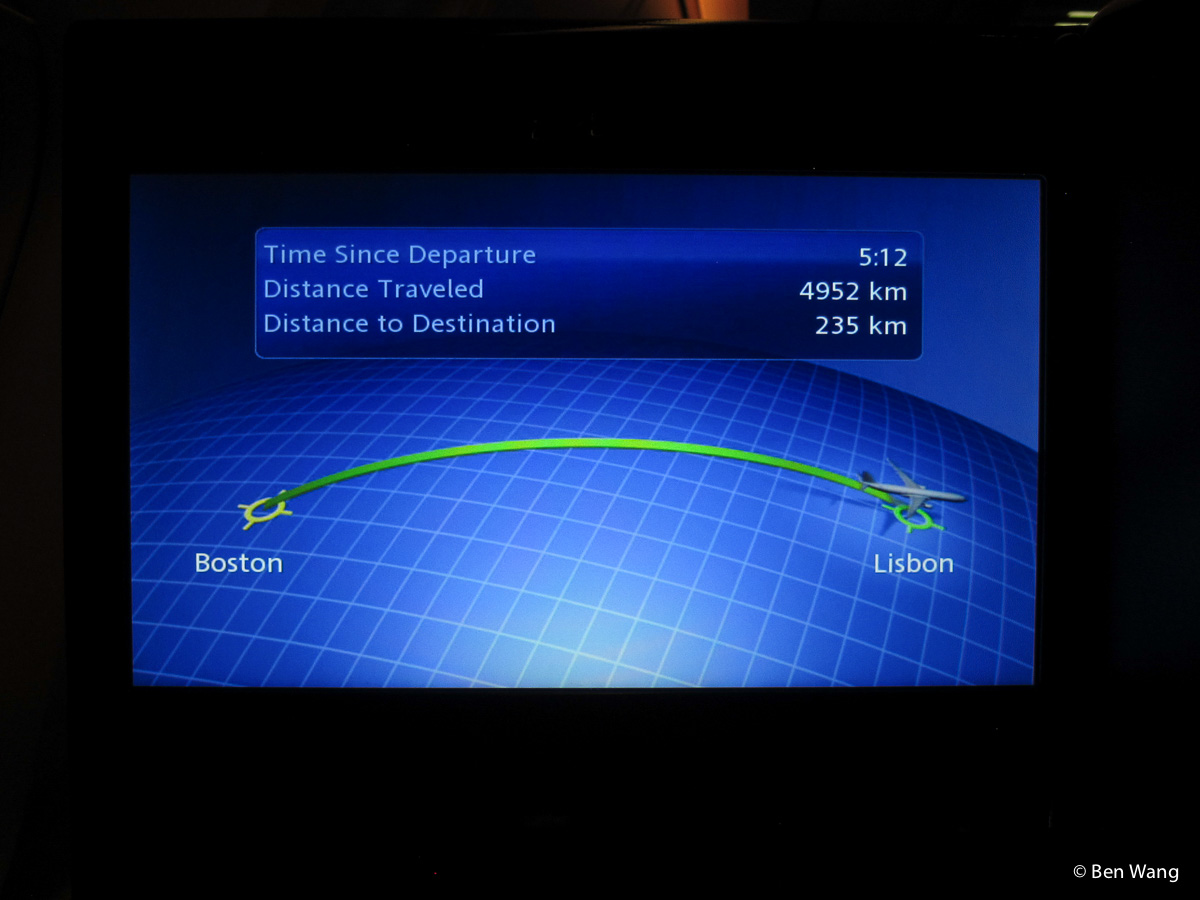 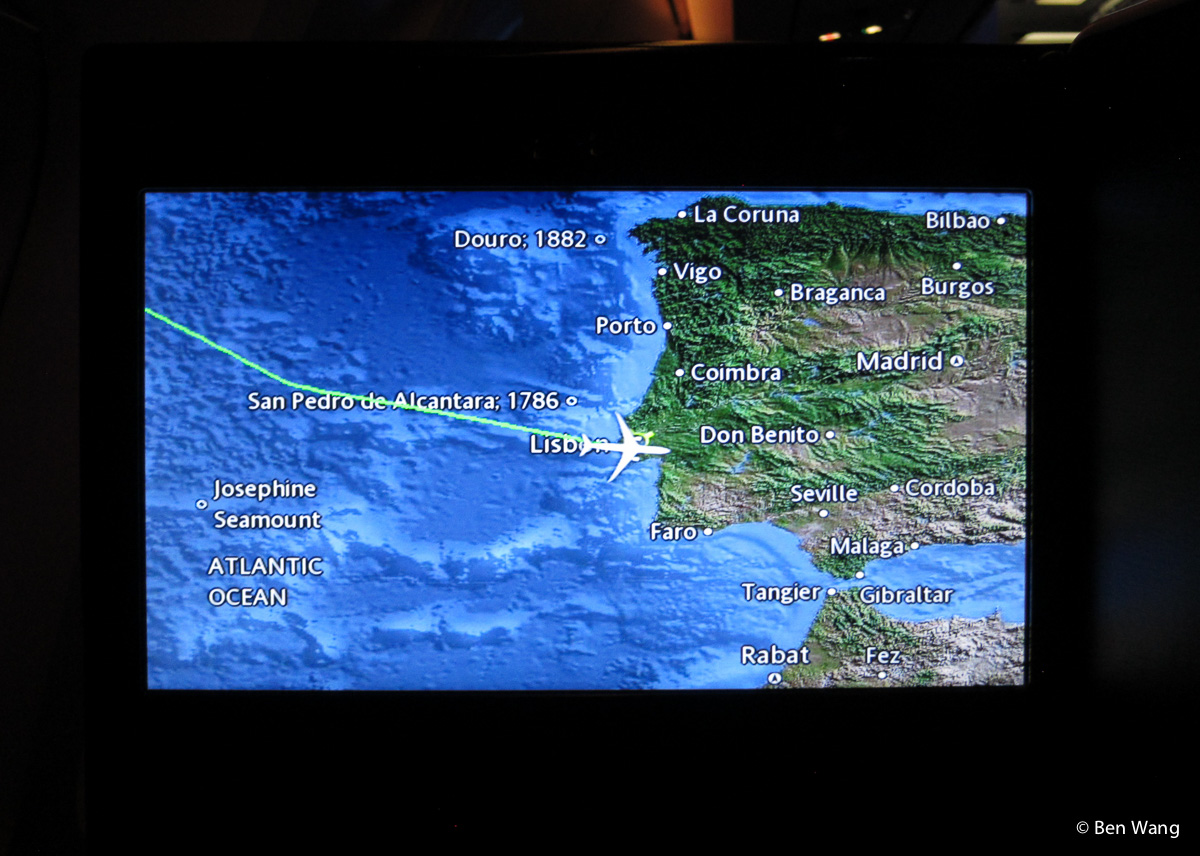 There were no air traffic delays as we made a straight in approach over the still-sleeping city. After clearing Runway 03, we made a right turn and quickly came to gate 145. Wheel stop was at 5:18 am local time, blocking just under 6 hours. 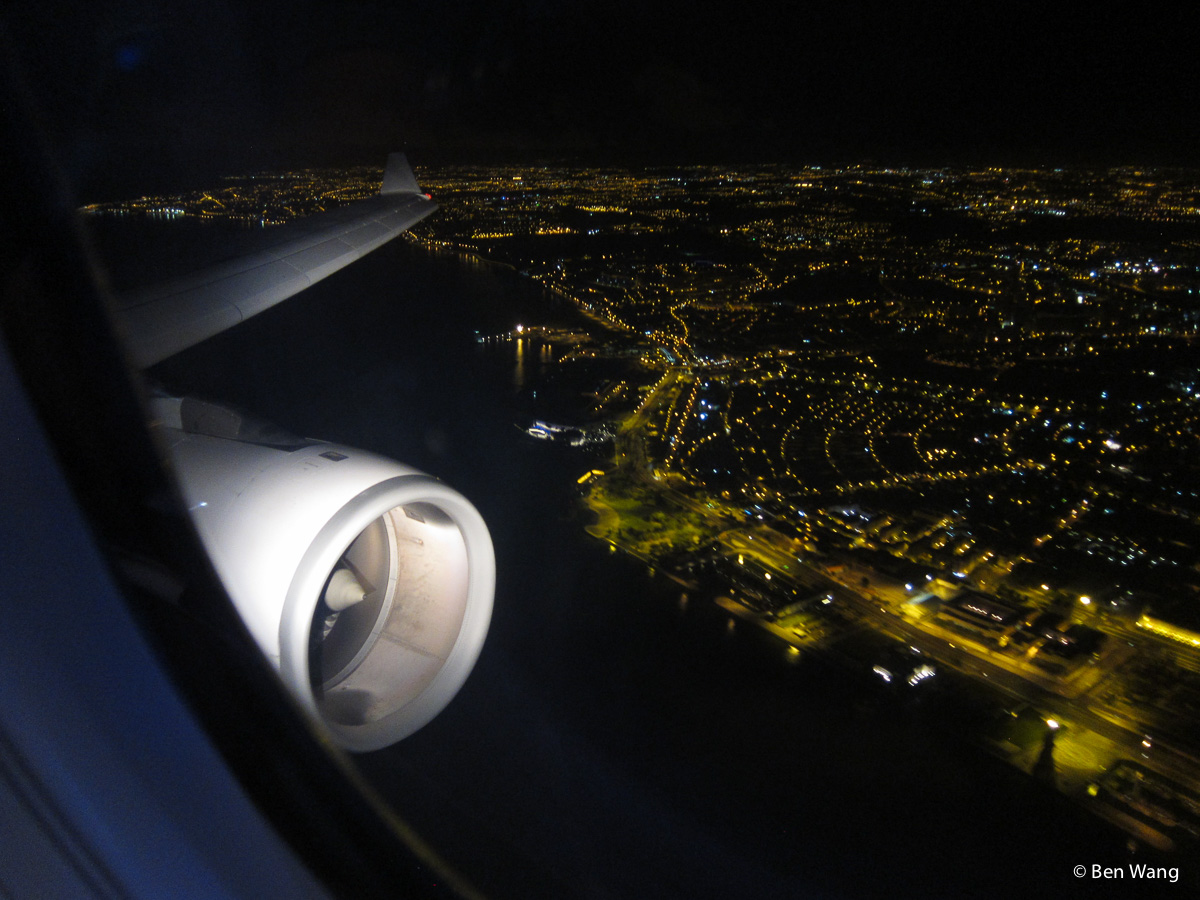 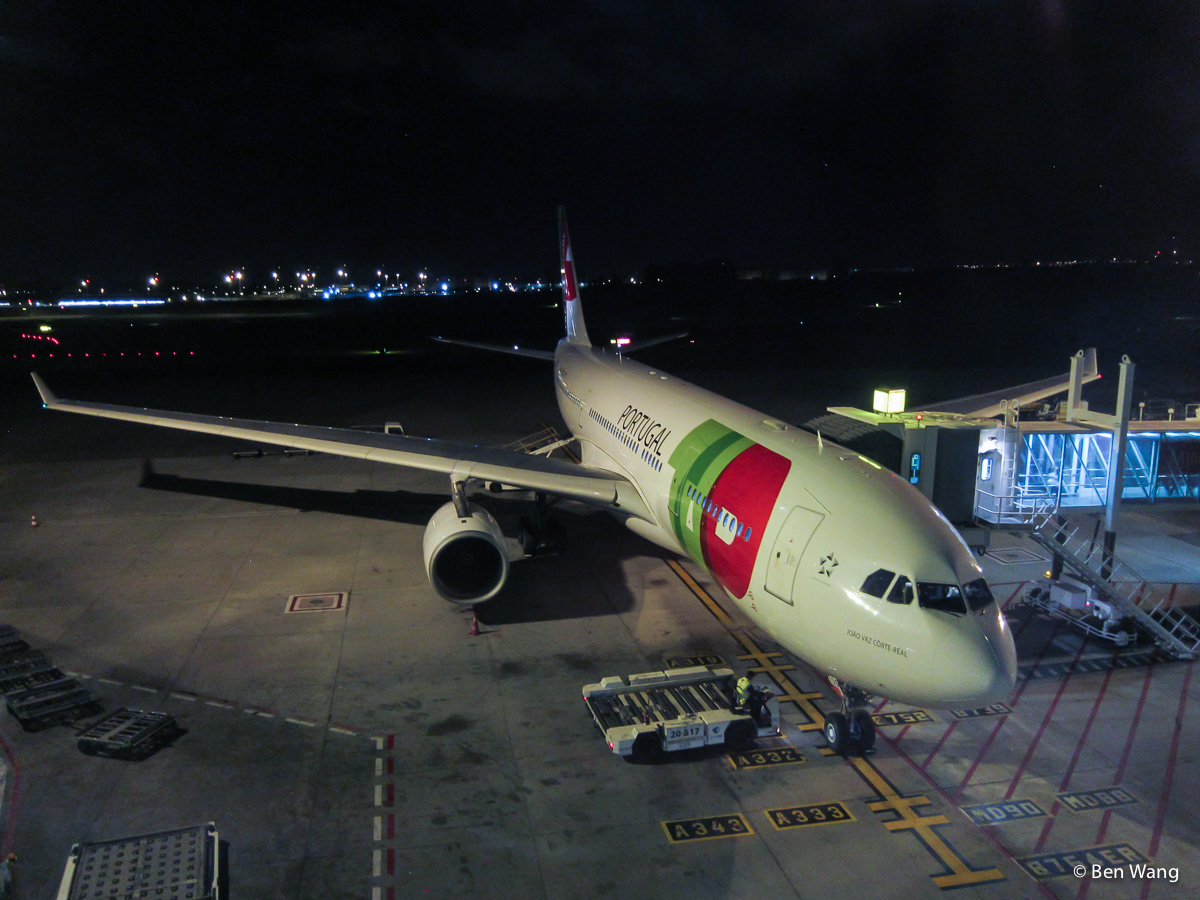 There are horror stories of long queues at Lisbon passport control during morning arrivals. I got lucky on this day, being among the first to arrive into LIS; I was through in about 30 minutes. While on my ride into the city, I realized it was 11 pm back home. It was bedtime - but the day was just getting started in Lisbon!

Overall, TAP’s service was excellent. The flight attendants spoke perfect English. They were down-to-earth, friendly, and unpretentious. I like that! However, the meal pacing of was too fast in my opinion. My guess that was necessitated by the fact that it was such a short flight and the crew wanted to maximize passengers’ sleep time. Meal presentation and quality were middle of the road, nothing spectacular, but everything within expectations for Business Class. Do realize that by this fall, TAP will be revamping their menu with a new “Taste of the Stars” program with Portuguese dishes inspired by Michelin starred chefs.

TAP’s popular “Portugal Stopover” program now allows medium- and long-haul passengers to stopover in Lisbon or Porto for up to five days without extra fare. Time is right to give TAP a try and make Portugal a part of your holiday while you are on your way to your final destination!

Thanks for the report, I have to make a couple of visits to Lisbon next year, i've been wondering how TAP's service has progressed of late, this gives me a some faith in them.

How was the Mint part of your trip ?
Top

Thanks for a great report! I am doing some planning next year and flying TAP is one of my choices.
This trip report gives me a very good idea on what to expect. TP Business class on the long haul flights look very good.

Great report. TAP's Business Class looks quite nice and the food looks good as well too! Thank you for sharing. I would love to visit Portugal sometime.

jetwet1 wrote:
How was the Mint part of your trip ?

Service on Mint was exceptional - among the best I have experienced in Business Class. Service was personalized, F/As were genuine and caring. What I experienced was consistent with other reports I have read. FWIW, here is my take on my blog.
My airliners.net photos
Top

Very interesting, thanks for sharing! I would certainly have appreciated such a fast-paced dinner. Part of the reason why I dread those shorter, 6 to 7-hour eastbound transatlantic flights is the fact that the meal service typically does not end until well over two hours after takeoff, and breakfast starts way too early, so I can only manage about two hours of sleep (if any at all).
Top
Post Reply