Visiting VH-OJA at the Wings Over Illawarra Airshow

Visiting VH-OJA at the Wings Over Illawarra Airshow 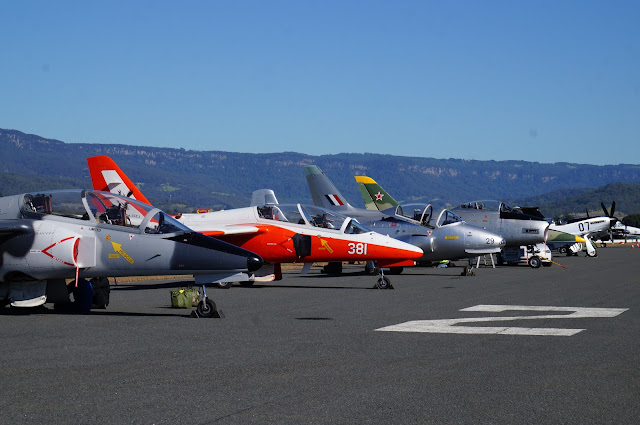 South of Sydney, only about forty minutes away, is the city of Wollongong. Despite the proximity to Australia's major aviation gateway, Wollongong has the Illawarra Regional Airport, built by the air force to defend the city's steel works. Until recently, when new starter Jetgo began flying their Embraer jets to Brisbane and Essendon in Melbourne, the airport had no regular passenger services once Qantaslink pulled their own infrequent turboprop service to Melbourne.

The Air Force pulled out of Wollongong long ago along with the major airlines, but their presence is still felt at the airport, which is home to <a href="https://hars.org.au/">HARS</a>, the Historical Aircraft Restoration Society.

Each year HARS puts on the Wings Over Illawarra airshow. I've been meaning to attend for a while but this year is the first time I could make it.

The airport is conveniently opposite Albion Park Rail station, but the three of us drove down. Parking was fine, a $5 donation to the Rural Fire Service to park in a paddock with a free shuttle bus to the entrance. I'd prepurchased entry tickets online.

There were $80 flights in helicopters, showground rides, vintage cars and stunt bikes, but the real reason for the visit was to see the aircraft against the stunning backdrop of the Illawarra escarpment.

The show started with a spectacular aerial performance by the RAAF Roulettes in their Pilatus PC-9s, then a C-130J Hercules impressed with short take-off and landing skills, followed by the Navy with their MH60R Seahawk helicopter. 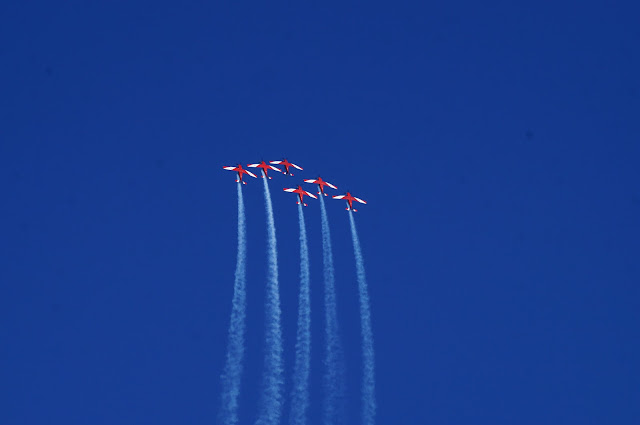 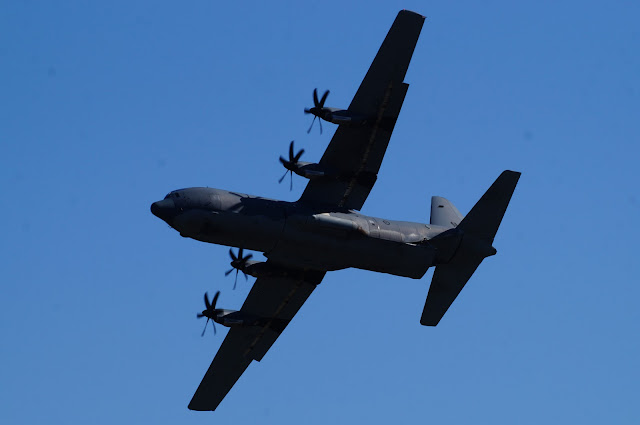 The Navy might have the biggest fighting vessels, but when it comes to aviation the Airforce beat the rotary sub-hunters with their P-8A Poseidon, based on the commercial Boeing 737 airframe. It's quite amazing to see an aircraft somewhat like the one you've done leisurely commutes in perform military manoeuvres with steep ascents and low, fast flypasts. 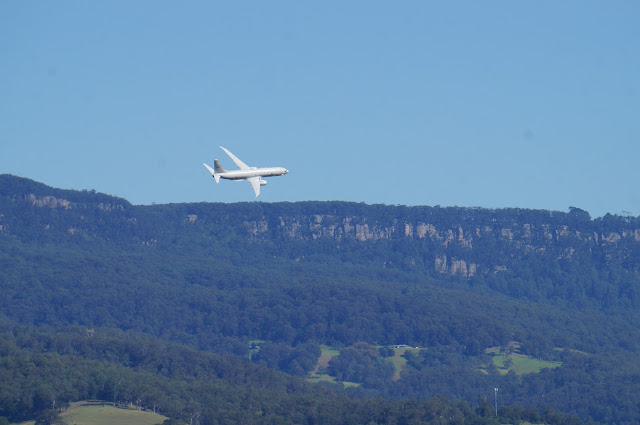 The departure of the P-8A signalled a switch to historical rather than currently serving aircraft, with a Beech-18, L-39C Albatross jet trainer, T-6 Harvard and CAC Wirraway going through their moves. 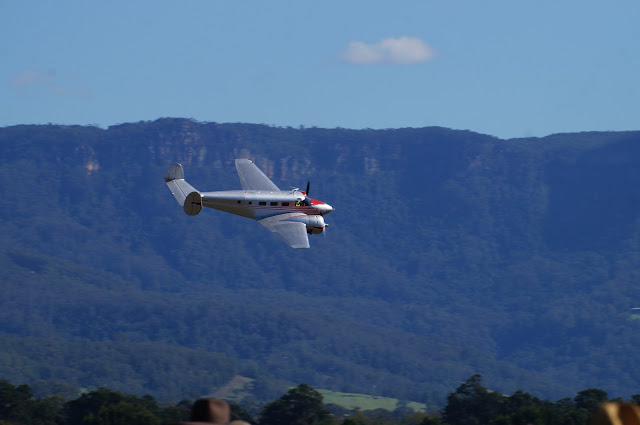 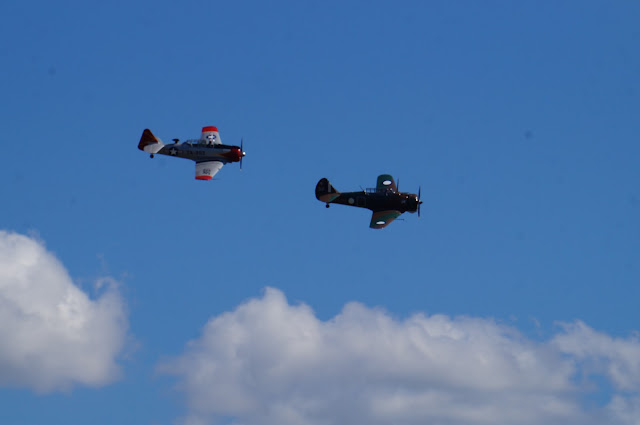 The folded wing TBM-3E Avenger, Yak-3U, Jet Provost and S-211 Marchettis also provided aerial displays, but what I really loved was seeing the trio of the Hawker Hurricane, Supermarine Spitfire and CA-18 (P-51) Mustang demonstrate their WWII superiority in the air. They were part of my childhood stories and I hoped that Alex, through David Walliams' "Grandpa's Great Escape", would be excited too. But I'm not too disappointed he is more interested in civil, rather than military, aviation. 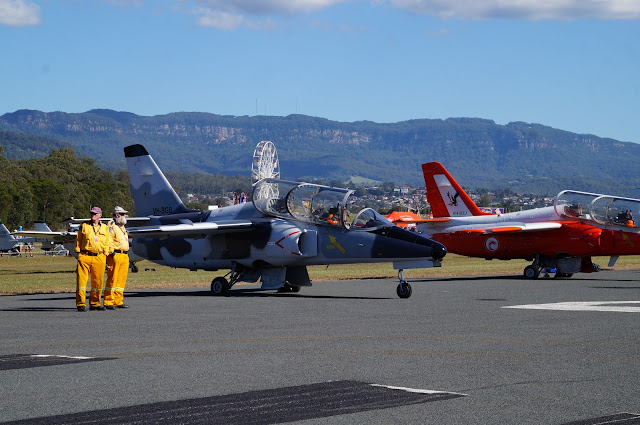 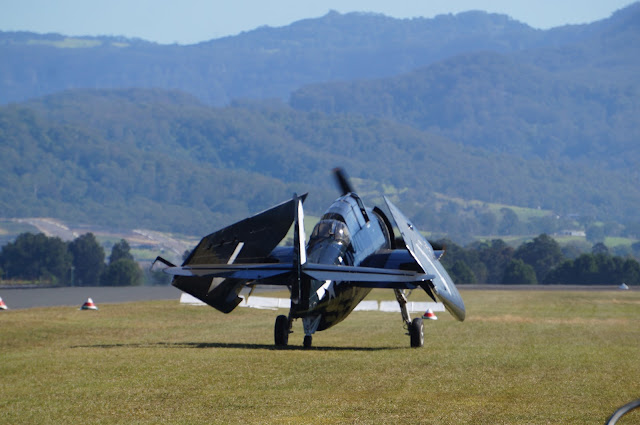 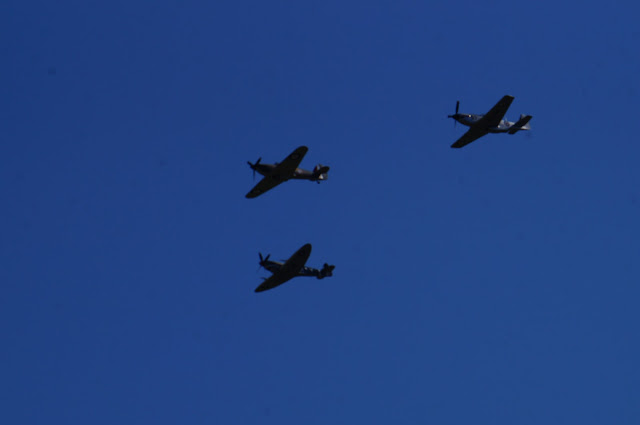 Interspersed in the show were some truly amazing aerobatics by Paul Andonicou, Matt Hall and Paul Bennet Airshows in a variety of aircraft. Watching an aircraft climb to the vertical, just hang there in the air and suddenly tumble downwards is both awe inspiring and vertigo inducing at the same time! 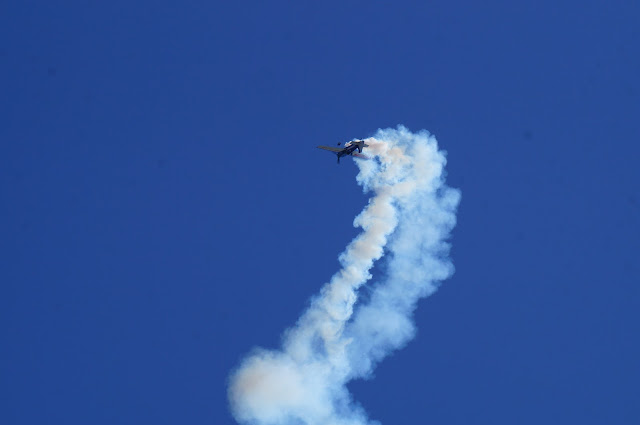 We crossed to the hanger side of the show to inspect the extensive number of static displays. HARS have an amazing collection of aircraft, both civil and military.&nbsp;

There seems to be a special fondness for maritime patrol aircraft in the group, with a jet black Catalina flying boat, three Neptunes and an Orion on display, along with a Viking in another hanger. Combined with the P-8A Poseidon that captures virtually all of Australia's maritime patrol heritage. They, along with the Canberra, Mirage III and F-111, brought back memories of going to airshows as a child, as each played a role. It's a pity that Alex will never see a live "dump and burn" from an F-111 as I did at a Bicentennial airshow in Rockhampton. 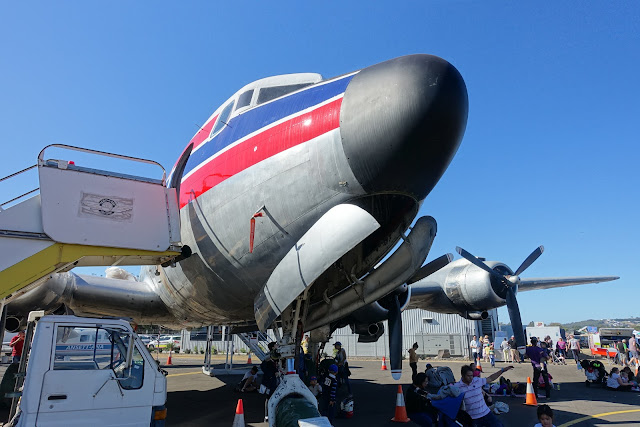 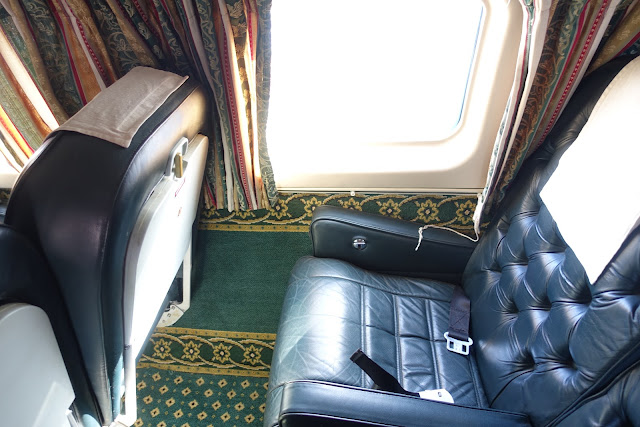 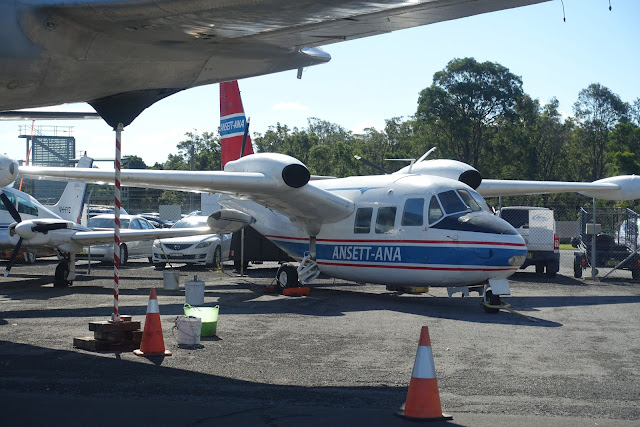 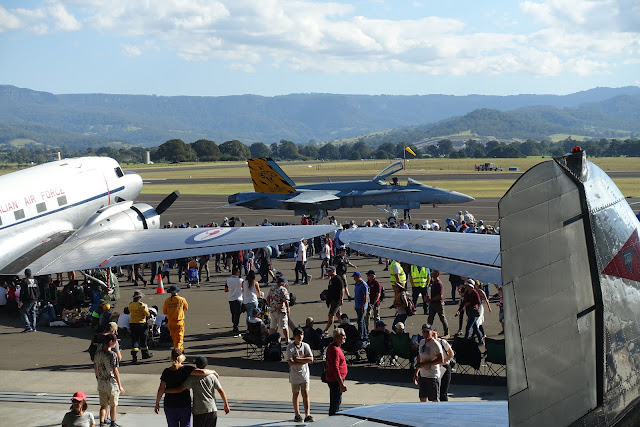 As I say however, he is more interested in civil aviation, thanks to our frequent trips. We climbed the steep stairs to peek inside a TAA Convair and Connie, HARS' Lockheed Super Constellation. Inside was fitted out more like a railway train, with big seats, plush carpets and curtains. A different era, for sure. 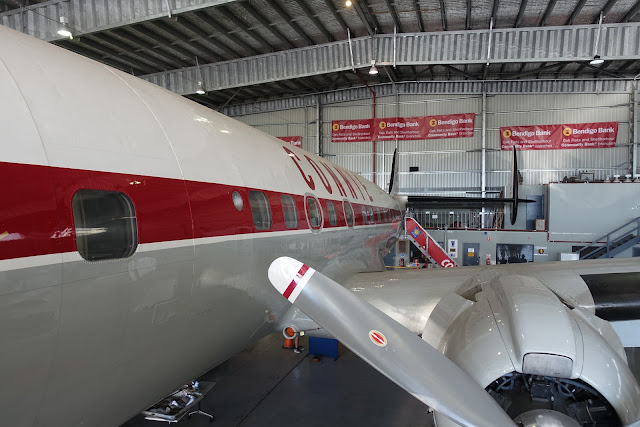 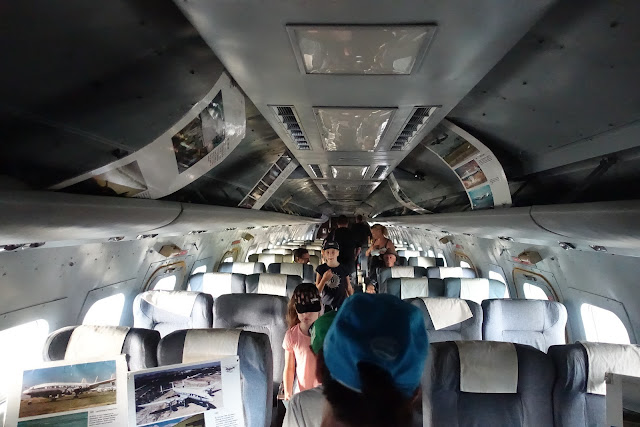 What he really wanted to see was HARS' most famous acquisition, the Qantas 747-400 VH-OJA. Holder of the longest delivery flight, it gained the record of the shortest when it flew between Sydney to Wollongong, straining the runway to its limit.

The aircraft was much as I had left it on my last flight in VH-OJA, except I never got to sit in business class as I did today. There were the same old blue seats with their little entertainment screens as when I flew back from Hong Kong to Sydney in 2009. So many memories of the Qantas 747 and so much sadness that they will be leaving the Qantas fleet altogether in a couple of years time. 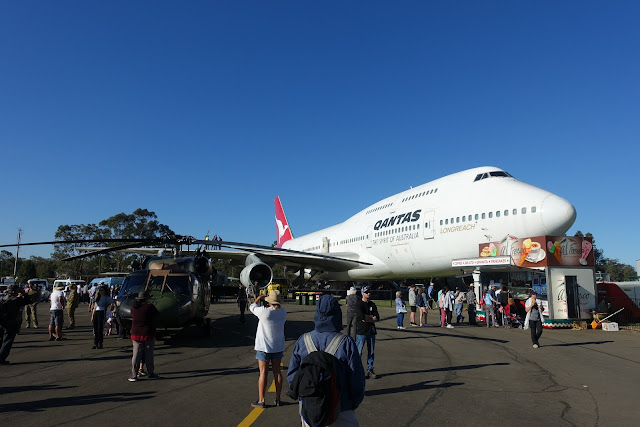 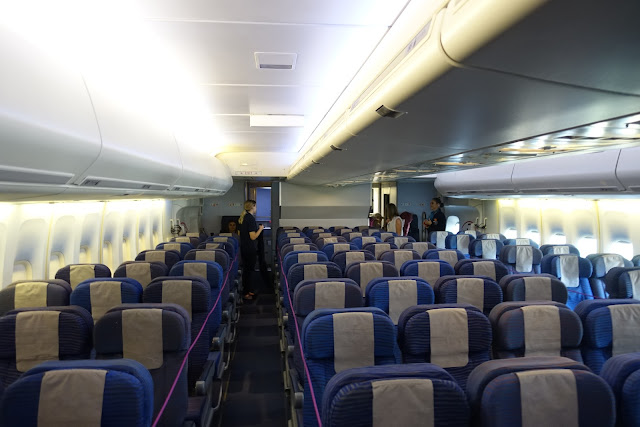 Unfortunately there was no chance to view the upper deck, somewhere I've never been, as it was closed due to a function. Neither did we pay for a wing walk. Alex was too young anyway, with a minimum age of 14.

We lingered a long time in OJA before eventually climbing down the stairs and returning to the ground, where there were a number of military helicopters were parked and able to be inspected. 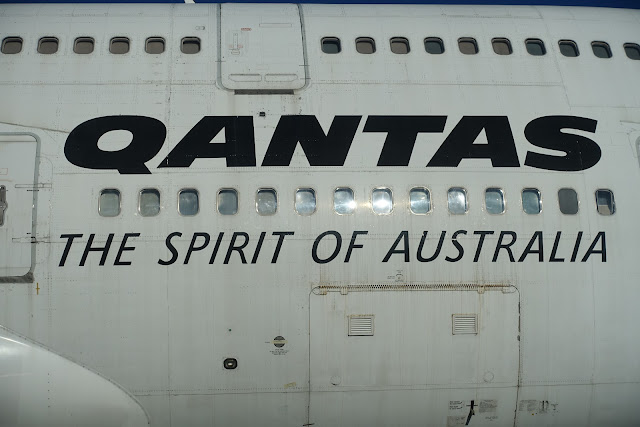 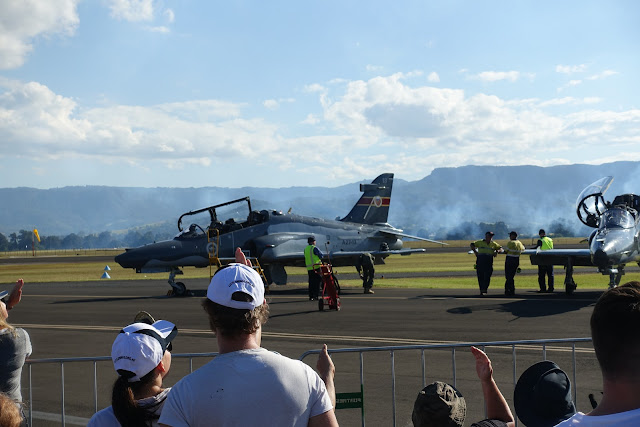 The loud roar in the background signified the pair of Airforce Hawk 127 jet trainers and that it was time to find a good spot for the finale of the day.

As we walked a CA-27 Sabre jet fighter raced overhead and I wondered if it was the same one I watched at the Point Cook Airshow so many years before. 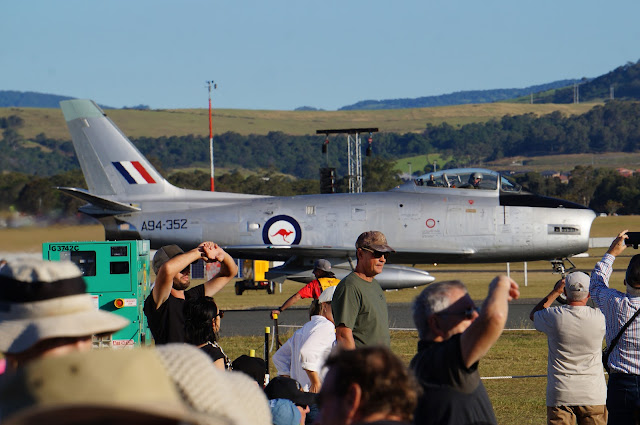 Last of all to perform were a pair of RAAF F/A-18 Hornets, one heading back to base, the other putting on a show. Alex was scared by the loud noise of the roaring jets, just as I had been all those years ago with their predecessors, the Mirage III. As they screamed upwards I could see the orange glow of their engines. So busy was I watching the aircraft itself that I missed the wall of fire, only noticing the rising smoke after the event. 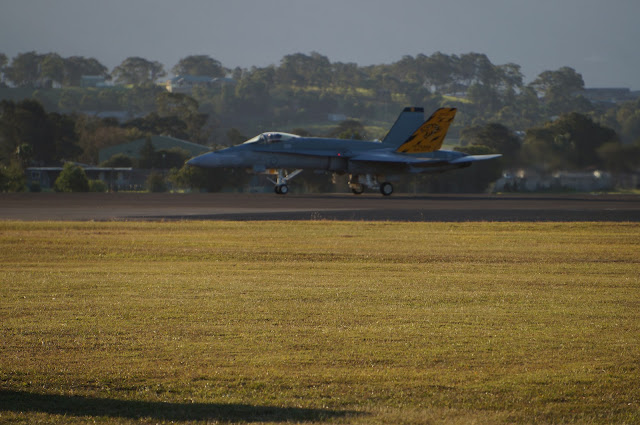 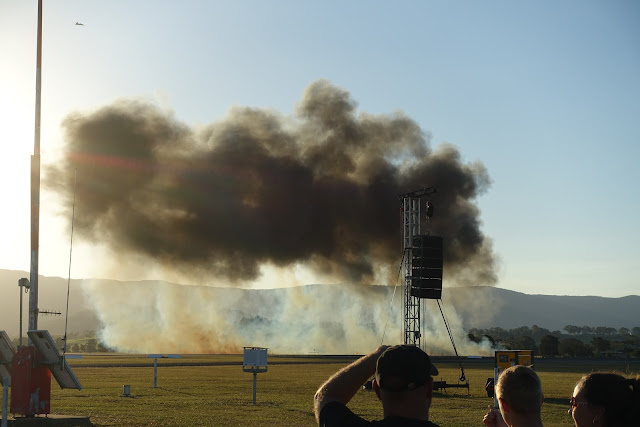 And then the show was over.

We trudged back towards the gate as the Sun drifted down towards the ridges overlooking the airport, bathing the scene in golden light. The other two headed for the bus, but I decided instead to catch the Illawarra Light Rail Museum train trundling through a short stretch of bush back towards the carpark. The narrow gauge engines come from mines and sugar cane farms, the carriage I was in from an old cable tram. It was a slow, but short, journey, a good way to end the day. 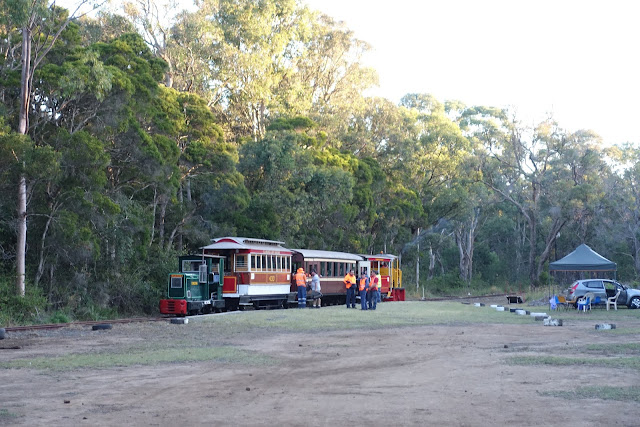 I got back to the dusty car first, the others ten minutes later, and we returned to Sydney as darkness fell, going out of the way to a twenty four hour K-mart to buy a birthday present for a young niece. After a day on our feet (and, for me, the previous day doing karate and walking laps at the Relay For Life charity event) we were utterly exhausted, but it was well worth it.

Even if you can't make it to airshow, HARS runs tours of its fantastic aircraft collection and, you know, maybe it would be a nice little airport to fly from to Essendon or Brisbane one day...

The age of OJA is really showing in that side on pic.

777Jet wrote:
The age of OJA is really showing in that side on pic.

That's my favourite photo of OJA. It looks more like a old seagoing liner than an aircraft. The 747 is, I think, the last major jetliner link to the days when flight was an adventure, not a commodity.

777Jet wrote:
I drove past HARS yesterday and was really tempted to go and check things out but time did not allow...

I reckon that you'd best go on a Tarmac day or book a tour https://hars.org.au/tours-pricing/. It's good to be able to walk up the stairs and take a photo without being hassled!
I like artificial banana essence!
Top

HARS is such a national treasure. I had a brilliant time there myself climbing through all the aircraft. And what a treat to have a 744 on display so close to Sydney. The HARS volunteers are exceptional people. Great post and pics!
Top

RetroRoo wrote:
HARS is such a national treasure. I had a brilliant time there myself climbing through all the aircraft. And what a treat to have a 744 on display so close to Sydney. The HARS volunteers are exceptional people. Great post and pics!

Thank you! Pretty exciting to that HARS will also be getting John Travolta's 707 as well which will mean you get to experience the end of the big props in the Super Constellation, the start of the jet age (707) and the last of the classic big jets in the 747. I personally wish they had a classic 737 as well considering the number of times I flew in them.
I like artificial banana essence!
Top

Thanks, was looking forward to seeing another of your trip reports on here before too long.

Thanks for showing us this event. This, and the Avalon Airshow are two events I've yet to experience. Haven't even been to the HARS as yet either!

The weather for the day did not disappoint. Love the views of the escarpments. Ah, I see you took the train back, a great choice!

Thanks, was looking forward to seeing another of your trip reports on here before too long.

Hehe, well I had to make up for that last non-compliant shell of a TR to Singapore earlier this year but everything else has been driving.

VapourTrails wrote:
Thanks for showing us this event. This, and the Avalon Airshow are two events I've yet to experience. Haven't even been to the HARS as yet either!

I haven't been to Avalon either. My only airshow in Victoria was an RAAF anniversary show at Point Cook or Laverton in the early 80's. My first time at HARS but I reckon I could convince my son to return for a tour of the 747 without any difficulty.

VapourTrails wrote:
The weather for the day did not disappoint. Love the views of the escarpments. Ah, I see you took the train back, a great choice!

You can also catch the train to HARS from Sydney as it's not far from Albion Park Rail station.

I wonder if there are any trip reports from the airport for current or previously scheduled services...
I like artificial banana essence!
Top
Post Reply